Welcome! Whether you are a first time visitor to Disneyland or a long time fan, I hope this guide to visiting Disneyland Resort helps you plan your trip. I do my best to keep this guide up to date, so please save the link and check it before your next visit. And if you have any questions, please reach out to me via my contact page! I’m happy to help.

Disneyland is the park that started it all! Disneyland Park opened in 1955 under the direction and guidance of Walt Disney himself. Walt Disney dreamed of a different kind of amusement park, where “age relives fond memories of the past … and here youth may savor the challenge and promise of the future.” (From Walt Disney’s opening day speech.)

Disneyland Park truly is special because it is the only Disney Park that Walt designed and built himself. Not only did he oversee the construction, but he even had an apartment built for himself and his family so he could stay there overnight! The apartment is located above the Main Street Firehouse, and if you look closely you can see a lamp in the window that never turns off. Fans like to say that’s the spirit of Walt Disney looking over his creation!

If you’re planning a first visit to Disneyland, I hope you find this guide helpful! 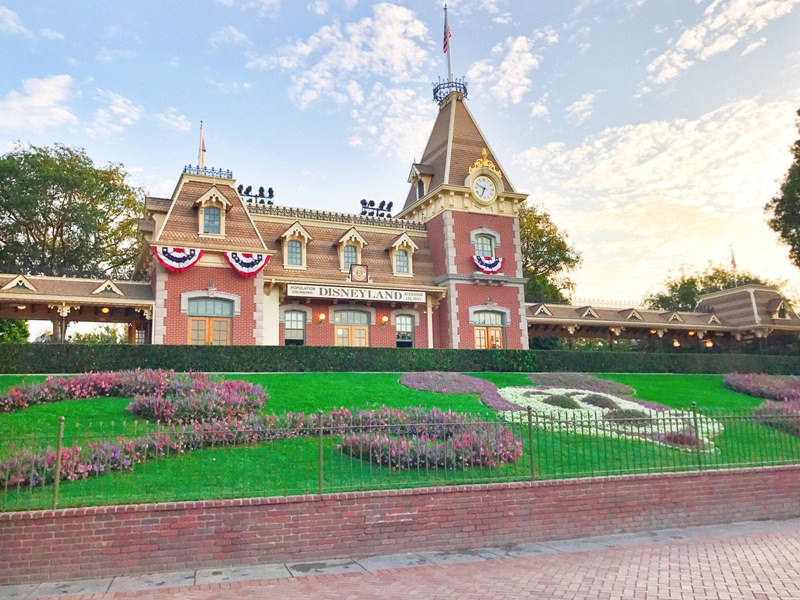 The closest airport is SNA – John Wayne Airport. However, this is a small airport and finding flights here from your location may be difficult.

Many visitors to Disneyland choose to fly through LAX – Los Angeles International airport. LAX is approximately 40 miles northwest of the Disneyland Resort, but your travel time could be 1-2 hours depending on traffic.

There is no official Disneyland transportation to or from any airport.  Disneyland recommends Guests use Karmel Shuttle, available for a separate fee.

If you are driving to the Disneyland Resort, you may park at one of three parking areas. Click here for details about parking at Disneyland.

Disneyland opened on July 17, 1955 and today is one of the world’s most popular vacation destinations!

Disneyland consists of 6 lands: Adventureland, Frontierland, Fantasyland, Tomorrowland, Toontown, and the newest land, Star Wars: Galaxy’s Edge. The lands are connected through a hub in the center of the park, where Sleeping Beauty Castle sits.

While most Guests visit for the attractions, Disneyland also offers several wonderful dining locations and entertainment offerings. One of the best parts about visiting Disneyland is, you never know what you may expect to see when you turn a corner! You might see the Disneyland Band, led by Mickey Mouse, playing down Main Street USA, or Peter Pan playing hide-and-seek from Captain Hook in Fantasyland.

Disney California Adventure opened on February 8, 2001, as part of a large expansion and reimagining of the Disneyland Resort.

The Park celebrates the history and culture of California, featuring several lands themed to different areas of the state. Over the years, many additions have been made to the Park using various Pixar and Marvel properties.

And, since alcoholic beverages are sold throughout Disney California Adventure at various lounges, quick serve locations, and carts, the Park is a favorite for adult Disney fans to meet with friends and relax.

Disney California Adventure is also home to a number of food & wine festivals throughout the year.

The Disneyland Resort’s most recent hotel is Disney’s Grand Californian Hotel and Spa, which opened around the same time as Disney California Adventure. In fact, the hotel has its own private entrance into the Park for Guests only.

Disney’s Grand Californian Hotel and Spa was designed in the arts and crafts style of the early 20th century, modeled after some of the beautiful lodges one would find in California national parks, namely Yosemite. Fun fact: the hotel was designed by architect Peter Dominick who also designed Disney’s Wilderness Lodge at Walt Disney World! If you have been to both, you know the interior feels very similar.

This hotel is the closest to the two Parks and therefore is priced at a premium. While rates fluctuate throughout the year, expect to pay at least $500 a night for Disney’s Grand Californian Hotel and Spa.

The property is also home to the Villas at Disney’s Grand Californian Hotel and Spa, the Resort’s only DVC member rooms.

The Disneyland Hotel has gone through a lot of changes since it first opened in 1956 (when it wasn’t even owned by Disney … in fact Disney didn’t own the hotel until 1988!) but remains a Guest favorite.

After a phased remodel that started in 2009, the property took on a retro Disneyland theme. The pool was renamed the Monorail Pool and features a sign resembling the old Disneyland entrance marquee. The guest rooms feature carpets with hidden Mickeys and headboards that light up with fiber optic fireworks.

The Disneyland Hotel is located on the west end of the Disneyland Resort property, but is close to the Downtown Disney Monorail station which takes you right into Tomorrowland inside Disneyland Park.

Of the three Disneyland hotels, the Disneyland Hotel would be considered the mid-tier property, with rooms starting around $400 a night.

Lovingly known as the Disneyland Resort’s “value hotel,” Disney’s Paradise Pier Hotel is a great option if you want to stay on Disneyland property but can’t swing the price of the big two hotels.

Disney’s Paradise Pier Hotel is located on the far west end of the Disneyland Resort property and is the farthest walk to the two Park front gates. Walking to the Monorail Station could save you some time if you plan to go into Disneyland Park, depending on how many people are in the queue.

The hotel has a charming beach theme, with a statue of Goofy holding a surfboard greeting Guests as they enter the hotel lobby. And the rooms here are rather spacious, the largest of the three Disneyland Resort hotels.

One perk of Disney’s Paradise Pier Hotel is the premium views looking into Disney California Adventure, specifically Pixar Pier (formerly Paradise Pier). Rooms with a view come at a premium price; if the view isn’t that important to you then opt for a city view instead.

A standard room with city view can be as low as $300 during the off-season.

*It was announced in April 2022 that Disney’s Paradise Pier Hotel will be getting a Pixar retheme.

Good Neighbor Hotels are listed as such on the Disneyland website, and are authorized to sell Disneyland tickets on site.

The majority of Good Neighbor Hotels are located on Harbor Blvd, the main road on the east side of Disneyland property, and many of these hotels are within a 5 to 15 minute walk to the entrance.

Other Good Neighbor Hotels can be a bit of a longer walk (20-30 minutes) or you can pay to use the ART bus system, use ride share, or drive your own car to the Disneyland Resort parking structure or Toy Story parking lot.

Click here to read a review of the Westin Anaheim

Click here to read a review of The Anaheim Hotel

The Downtown Disney District opened with the Resort’s major expansion in 2001 and has been a major shopping & dining destination ever since!

Downtown Disney is a different from the Parks because it’s open to the public – no ticket needed.

Downtown Disney offers a variety of dining and shopping experiences, including a massive World of Disney store selling all sorts of Disney and Disneyland merchandise.

Don’t forget to pick up some of your favorite Disneyland treats at Marceline’s Confectionary before you head out!

Disneyland celebrates several holidays throughout the year, including the Christmas/winter season, Halloween, and Easter.

Click here to learn more about Halloweentime at the Disneyland Resort

The Disneyland Resort will be offering the same types of tickets, at the same prices, that were in place prior to the shutdown. Refer to the charts below or visit https://disneyland.disney.go.com/park-availability/

(AD) I recommend purchasing tickets ahead of time through Undercover Tourist and save a couple dollars! Click here to see ticket prices and options.

For more info, refer to the Ticket Calendars on the Disneyland website.

– Staying at the Disneyland Resort hotels does not guarantee a theme park reservation.

– Guests with park hopper tickets may choose which park to begin their day. Park hopping will be available after 1pm.

– Park hours vary for both parks. Hours are subject to change so check the Disneyland website or mobile app before your visit.

– Parking is not included with the price of the ticket. Parking is available at Mickey and Friends and Pixar Pals structures, as well at Toy Story parking lot. Both parking areas open 2 hours before park opening. Parking is $30, or $45 for preferred parking. Larger vehicles may require an extra parking fee.

How Many Days Should I Visit?