We are getting a first look at the new Disney Genie system and the perks it will provide to Disneyland and Walt Disney World guests. Among the many features is the new “paid FASTPASS” system we have been anticipating since the Parks reopened after the coronavirus closure without the popular FASTPASS and MaxPass at Disneyland, and FastPass+ at Walt Disney World.

We now know the new system is called Disney Genie+ and will give guests the option to pay an extra fee for the opportunity to skip an attraction’s standby line and use the “Lightning Lane” for a shorter wait time.

Disney Genie and Genie+ launched at Disneyland on December 8, 2021.

Let’s unpack everything we know about this service so far! Since my website focuses on the Disneyland Resort in California, I am going to share information for Disneyland only. 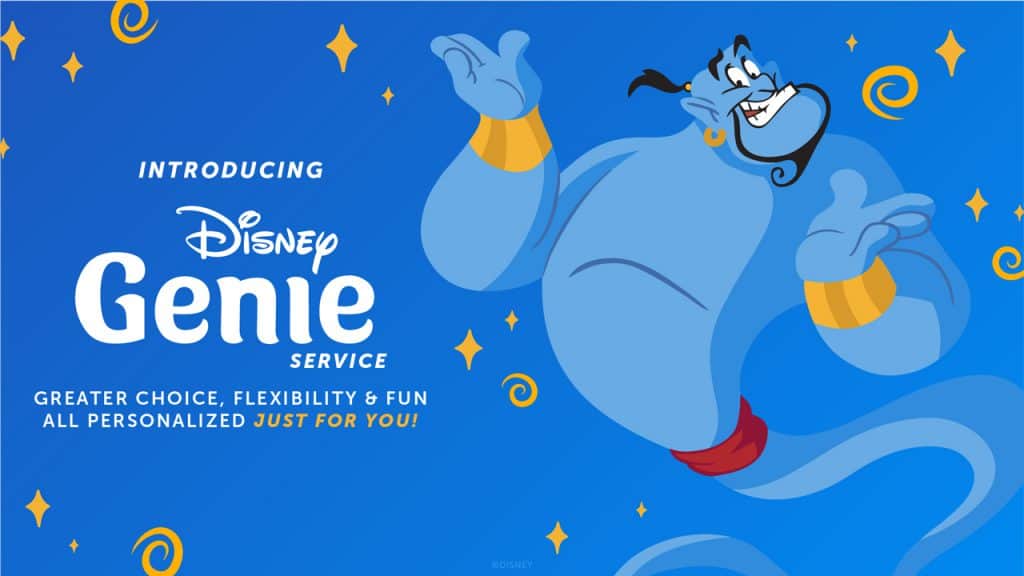 Disney Genie and Genie Plus at Disneyland – FastPass Replacement

What is Disney Genie?

Disney Genie is a new feature within the Disneyland app that uses AI (artificial intelligence) to plan your visit.

Prior to your trip to Disneyland, you can open the Disneyland app and use Disney Genie to select your attraction, dining, and entertainment priorities.

While you’re at Disneyland, you can take a look at the Disney Genie itinerary for suggestions. Disney Genie will recommend the best times to go on attractions and remind you of dining reservations and entertainment you don’t want to miss.

Disney Genie is a free planning service and available for any and all Guests to use, as long as you have the Disneyland app.

What is Disney Genie+?

Disney Genie+ is an optional paid add-on to Disney Genie, that helps Guests skip the stand-by line and maximize their time in the parks.

In short, Genie+ is very similar to the former MaxPass, so if you used MaxPass in the past you’re not going to have a big learning curve with Genie+.

With Genie+, guests have the option to pay an additional $20 per guest, per day, for the ability to request a “reservation” for select attractions. When your assigned time window comes up, return to the attraction and you will wait in a shorter “Lightning Lane” queue.

However, more popular attractions such as Star Wars: Rise of the Resistance will not be included in Genie+. Instead, a paid Individual Lightning Lane reservation for these attractions will be “a la carte,” priced between $7 to $20 per guest per attraction, with the fee fluctuating depending on factors such as time of day, time of year, and how busy the parks are that day.

Guests will be able to request two of these Individual Lightning Lane reservations per day.

What is Lightning Lane? 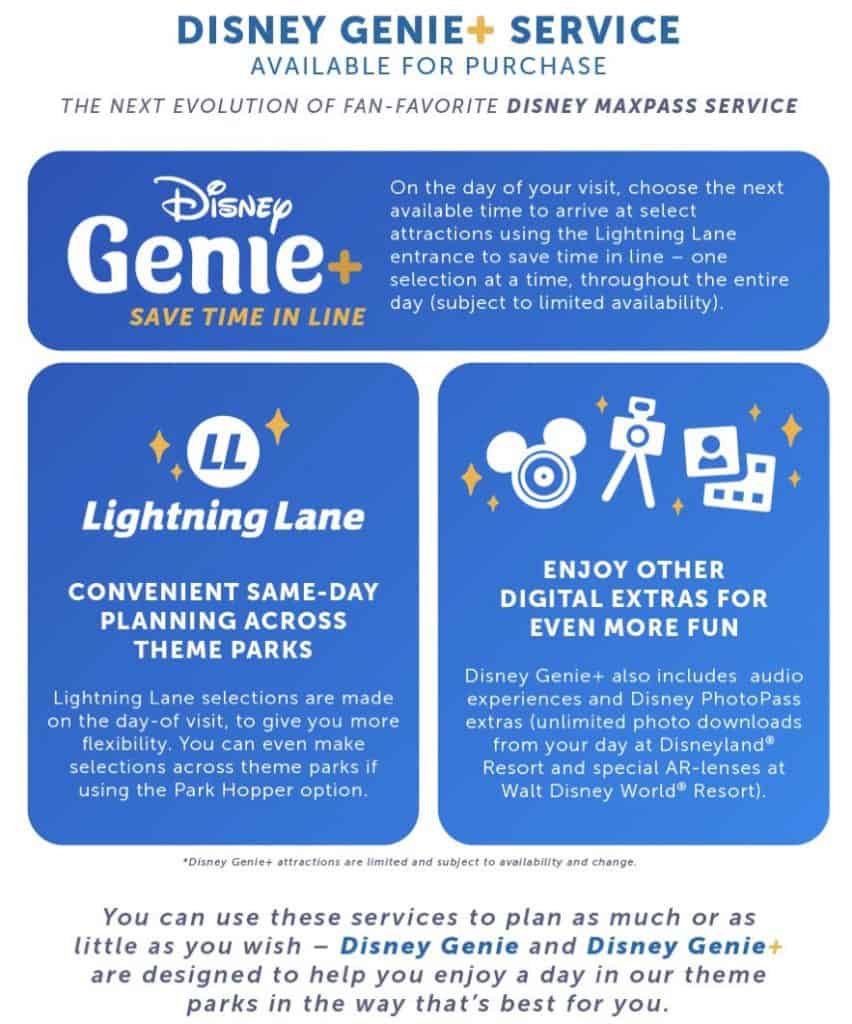 Free FASTPASS is Being Retired

MaxPass was introduced in 2017 to give guests an easier way to access FASTPASS via the Disneyland app for an additional fee. However, guests could still use the FASTPASS kiosks to select a FASTPASS return time for free.

With the introduction of Disney Genie+, free FASTPASS will not be offered anymore. The only way to utilize the FASTPASS queues – now known as Lightning Lanes – will be to use the paid Genie+ system.

With the exception of attractions that use a virtual queue, all attractions will continue to have a stand-by line for guests who do not want to pay for the Genie+ system.

As with the old MaxPass, Disneyland guests will get unlimited PhotoPass downloads for the day with their Genie+ upgrade.

The new Genie+ system and Lightning Lanes should have no effect on DAS. You can read the most up-to-date information about DAS on Disneyland’s website.

What Attractions Are Included with Genie+?

Here are the Disneyland Resort attractions included with Genie+:

The following attractions will not be included with Genie+ and instead will have their own Individual Lightning Lane fee:

How to Use Genie+

I tested Genie+ for myself and want to share some screenshots and best practices with you.

How to Purchase Genie+

The easiest way to purchase Genie+ is to take a look at your Disney Genie Tip Board” and look for an attraction that offers Genie+ Lightning Lane. Select it, and it will prompt you to make the purchase. You can either use your credit card on file in your app or Apple Pay.

To purchase, follow the prompts and select your party members. Make sure only the members in your party who want Genie+ that day are selected.

How to Make Genie+ Selections

Once the purchase is confirmed, the app will take you back to your Genie+ Tip Board. 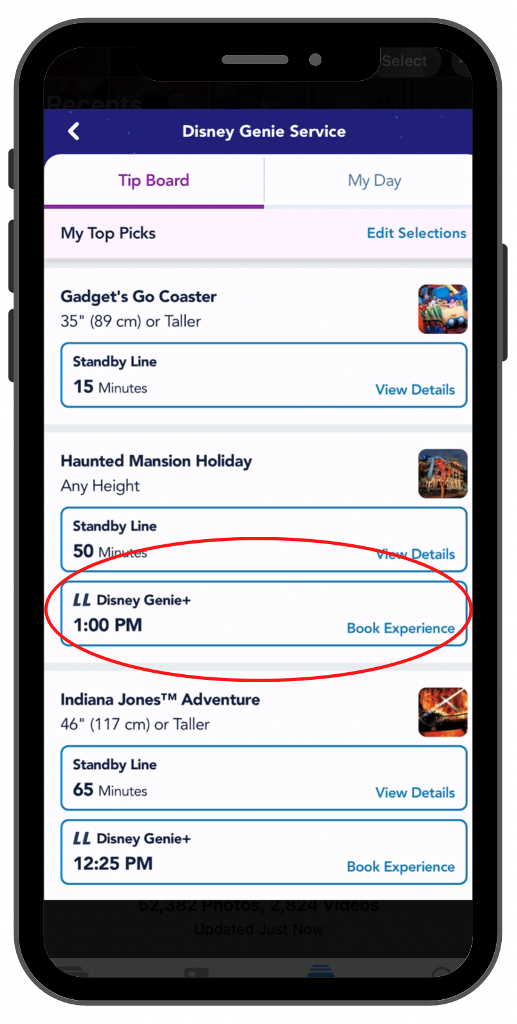 From the Tip Board, you can scroll through the list of attractions and select the one for which you want a Lightning Lane pass.

Tip: If you set up priority attractions in Disney Genie, the app will list those attractions at the top.

Alternatively, you can look at the map and navigate to the attraction you want to ride. Tap on it, and then tap on the “LL” Lightning Lane logo. The app will refresh to the Disney Genie interface where you can select your Lightning Lane return pass.

The Lightning Lane pass will give you a one hour window of time to return to the attraction. Your return time will depend on how popular that attraction is. It may be immediate or it may be a few hours later.

When your Lightning Lane window of time arrives, make your way to the front of the attraction and look for the “Lightning Lane” sign, which indicates the queue to enter. 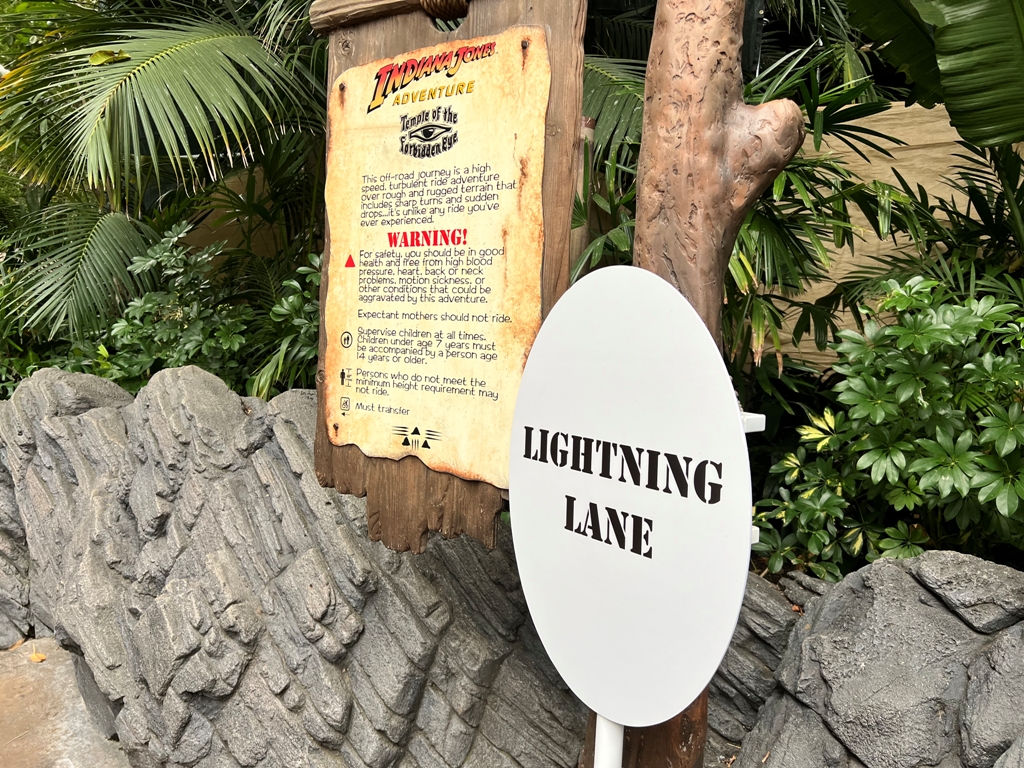 If you are confused on where to go, ask the Cast Member at the attraction entrance. 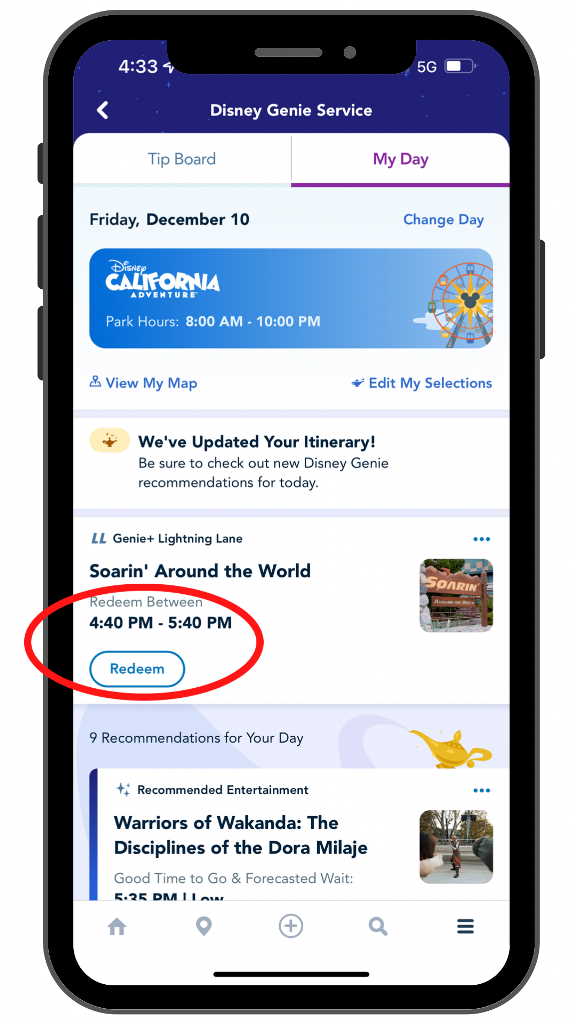 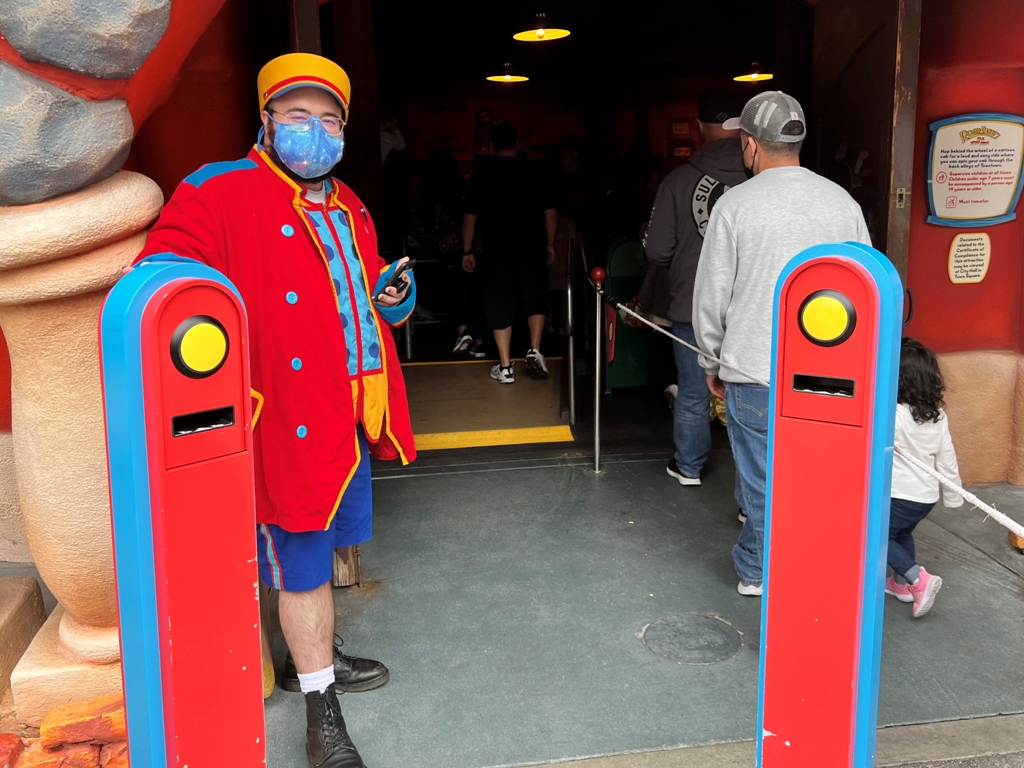 Yay! That means you may proceed through the queue. If something goes wrong, a Cast Member will assist you.

Once your Lightning Lane pass is scanned, don’t forget to select your next one!

I realize some aspects of the new Disney Genie+ service are confusing, so I created this Frequently Asked Questions section to help break it down.

What is Genie+ and how does it work?

Genie+ is the replacement for the old FASTPASS and MaxPass systems, which have been retired. Genie+ will be part of a new service called Disney Genie, which will be housed inside the Disneyland app. Disney Genie is a free offering that will help guests make the most out of their visit to the parks. Genie+ is an optional paid add-on to the Disney Genie technology.
$20 per person per day at Disneyland. Guests under 3 years who don’t need a ticket do not need to have Genie+.
Not at this time, but I suspect this will be offered in the future. Perhaps in a couple years.
No, the free version of FASTPASS has been retired. The only way to get access to a shorter queue is to purchase Genie+.
No, Disney Genie will be housed within the Disneyland app and the My Disney Experience app for Walt Disney World.
Nope! Paying for Genie+ gives you access to most attractions that utilize the Lightning Lane. Only a small amount of high demand attractions will require their own Lightning Lane fee, separate from Genie+.
Lightning Lane is the new name for the former FASTPASS queue.
Guests will be able to purchase Genie+ as an add-on when buying tickets. Otherwise guests who already have tickets can purchase the Genie+ add-on the day of their park visit, after scanning into the park. Magic Key pass holders will be able to purchase Genie+ the day of their park visit. Guests can make the purchase right in the Disneyland app.
Yes, if they want to use the benefits of Genie+, everyone needs to purchase their own upgrade. If all of the Guests in your party are linked, then one person may purchase Genie+ for the entire party in one transaction.
Just like the old FASTPASS system, the Lightning Lane passes only work if Disney offers a limited number of them every hour. Therefore, yes, Lightning Lane availability can potentially fill up quickly.
As far as the individual paid Lightning Lane attractions, we will have to wait and see how much demand it there for this service. It’s possible a popular attraction like Star Wars: Rise of the Resistance will have all of its available paid Lightning Lane passes snatched up right at park opening, especially on a busy day.
***
I hope this guide helps you with understanding the new Disney Genie+ service at Disneyland! For more information about planning a trip to the Disneyland Resort in California, please visit my Disneyland guide.
7 Shares
Tweet
Share
Pin7
Share
We Recommend