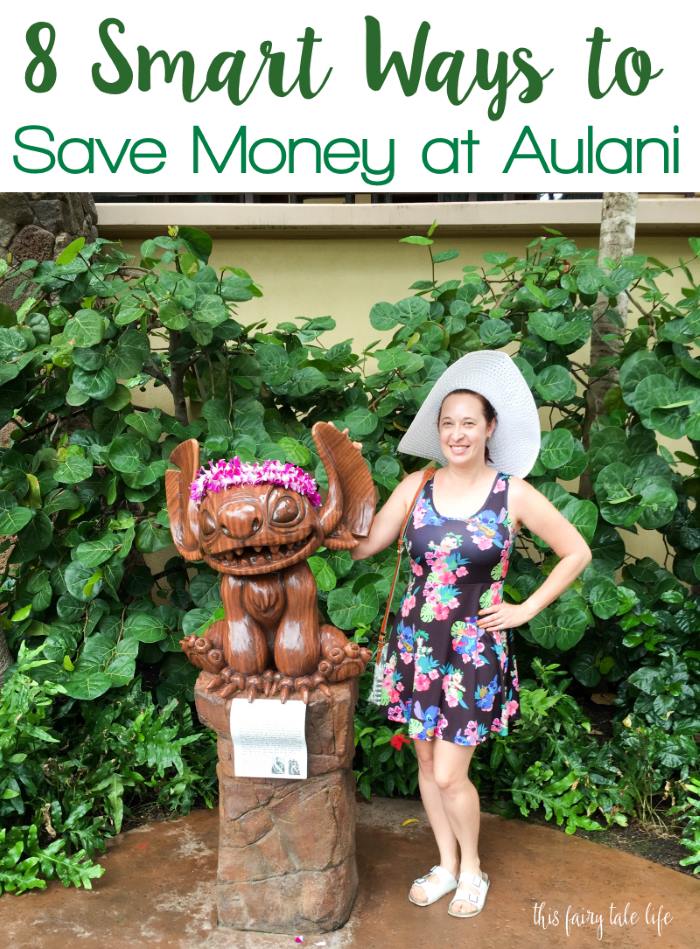 I just returned from visiting Aulani, a Disney Resort and Spa in Ko Olina, Hawaii. After spending six glorious nights there, I have so much to say about the beauty and hospitality of Aulani, and all that is coming up. But right now I just want to say … wow, Hawaii is expensive. Sooooooo expensive. I had heard this during my research and planning but it really hits you once you’re actually there. But, there are a few ways you can ease the pain on your credit card! I hope these tips help you when planning your trip to Aulani.

8 Ways to Save Money at Aulani

1. Book as early as you can. You can generally book about a year in advance. This is less about saving money and more about getting the type of room and dates you want, because Aulani books up fast.

2. Go during the off season. Just like visiting Disneyland or Walt Disney World, your dollar will stretch farther if you can vacation during the off season. For Aulani, their “value” season is generally January through February, maybe a couple weeks in April & May depending on spring break, mid-October through mid-November, and early December.

3. Rent DVC points. Aulani was built with DVC in mind. More than half of its 840 rooms are designated for DVC members. Non-members can rent DVC points from a member who won’t be using their points, and can generally get a better deal on a room than if they booked a hotel room directly with Aulani. We did not book our trip using DVC points so I can’t comment on how it works, so I’ll direct you to this post by Trips with Tykes if you are interested in how it’s done.

4. Skip the ocean view. And I’m recommending this as someone who sprung for the ocean view. Yes, it’s nice, and we sat on our patio and certainly enjoyed the view, but you are in your room so infrequently. If every penny counts, go with the island view or garden view rooms instead.

5. Stock up on supplies at the Island Country Market across the street. When you exit Aulani, turn left and walk to the intersection. It’s about a five minute walk. There is a good size shopping center there where you can pick up cheaper food and drinks than on Aulani property. The Island Country Market is small for a grocery store, but it had everything we needed. We stocked up on bottled water, beer and wine (which we then took in our own containers down to the pool … shhhh….), crackers and cookies, and sunscreen. If you want to save even more money, you can drive your rental car or take a taxi to the nearby Costco or Target. Also, if you have Amazon Prime you can have items shipped ahead, but keep in mind shipping takes at least five days so you need to plan ahead.

6. Grab dinner off property. The same shopping center across the street has a few eateries. The most popular is Monkeypod, a two story restaurant and bar. We found the regular prices were on par with Aulani, but they have a great happy hour featuring half off appetizers and other specials. Aside from Monkeypod, there are a few fast food type places, including pizza, tacos, and ice cream places. The Island Country Market also has a deli section with sandwiches and grab-and-go items. We saw many people carrying large pizza boxes and Island Country Market bags through the Aulani lobby around dinnertime.

7. Skip the pricey souvenirs. I love my Disney trinkets, I really do. I would never ask you to withhold from treating yourself to a nice Aulani momento. But do you really need a $30 ornament you’ll see once a year? Pick your souvenirs wisely. I found a floppy hat that was on clearance which I wore everyday during the trip. I also found a set of magnets with clearance stickers. Hunt for bargains! If nothing else, snatch the complimentary logo pen from your room.

8. Cash in your Disney Visa dollars. Guys, I had been saving my Disney Visa rewards dollars for YEARS with no real idea on how I’d spend them. I decided Aulani was finally the time. If you have a Disney Visa, save up your dollars so you can use them to splurge a bit at Aulani!

If you have traveled to Aulani, what are your money-saving tips?