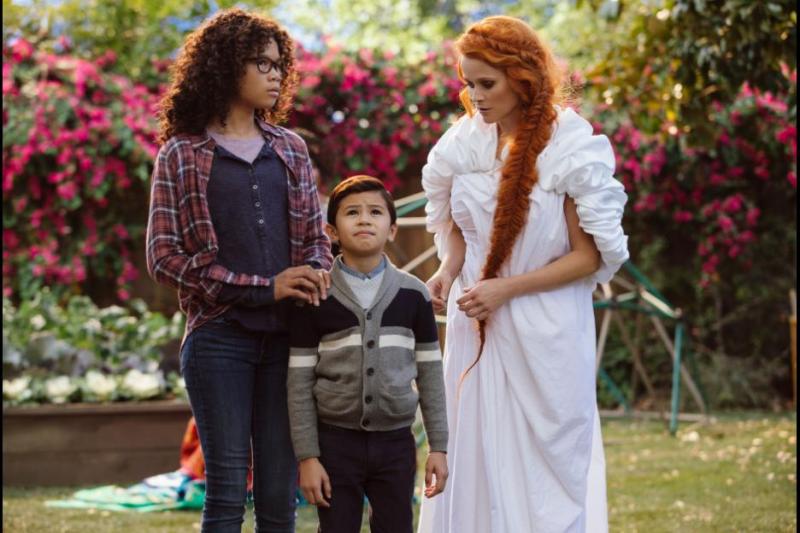 A Wrinkle in Time is the newest live-action Disney movie to hit theaters this year, and it’s a fantasy blockbuster like I have never seen before. If you’re not familiar with A Wrinkle in Time, here’s a brief synopsis and trailer for you to enjoy:

From visionary director Ava DuVernay comes Disney’s “A Wrinkle in Time,” an epic adventure based on Madeleine L’Engle’s timeless classic which takes audiences across dimensions of time and space, examining the nature of darkness versus light and, ultimately, the triumph of love. Through one girl’s transformative journey led by three celestial guides, we discover that strength comes from embracing one’s individuality and that the best way to triumph over fear is to travel by one’s own light.

Meg Murry is a typical middle school student struggling with issues of self-worth who just wants to fit in. The daughter of two world-renowned physicists, she is intelligent and uniquely gifted, as is Meg’s younger brother, Charles Wallace, but she has yet to realize it for herself. Complicating matters is the mysterious disappearance of Mr. Murry, which has left Meg devastated and her mother broken-hearted. Charles Wallace introduces Meg and her fellow classmate Calvin to three celestial beings (Mrs. Which, Mrs. Whatsit and Mrs. Who) who have journeyed to Earth to help search for their father, and together they embark on their formidable quest. Travelling via a wrinkling of time and space known as tessering, they are transported to worlds beyond their imagination where they must confront a powerful evil force. To make it back home to Earth, Meg must face the darkness within herself in order to harness the strength necessary to defeat the darkness rapidly enveloping the Universe.

A WRINKLE IN TIME Movie Review

I went into A Wrinkle in Time not knowing anything about it. The book never crossed my radar when I was younger but I’m aware of its popularity and passionate fan base. I can’t speak to how well the book translates to the big screen; however, everyone I’ve spoken to who has read the book enjoyed the movie.

The casting is brilliant. Young newcomer Storm Reid plays Meg and manages to embody the awkwardness that all tweens seem to experience. Her younger brother Charles Wallace is played by the adorable Deric McCabe, a fellow Burbankian. They are accompanied through the universe by Meg’s friend Calvin, played by Levi Miller. And because you can’t have a tween movie without a mean girl, Rowan Blanchard plays Veronica, who torments and teases Meg at school. I really would have loved to have seen more from her character.

Oprah Winfrey, Reese Witherspoon, and Mindy Kaling play the three celestial beings – The Mrs. – who guide the kids, and the audience, from place to place, all while wearing the most fashionable couture available in the universe. Bottom line – the queens slay, okay?

Gugu Mbatha-Raw and Chris Pine play Meg’s parents, with Chris taking on a more prominent role after he goes missing (ironically). It’s great to see such racial diversity in this movie, and it would be great to live in a world where such things did not have to be commented on.

Zach Galifianakis and Michael Peña don’t have much screen time but bring some comic relief and intrigue with their roles. I loved Michael Peña in Ant-Man and I love Zach in, well, everything he does.

The universe itself should be considered a character in this movie, too. We are taken to so many different fantasy worlds, some of them overwhelmingly beautiful and others dark and serious, but all of them evoking different emotions.

This is a dense movie, with lots of plot points to follow and lots of belief to be suspended. It’s a movie aimed at tweens, who can perhaps tolerate the fast moving pace better than adults. Overall it’s a movie about self-acceptance and love, and what’s better than that?

A Wrinkle in Time is rated PG and opens in theaters Friday March 9, 2018.