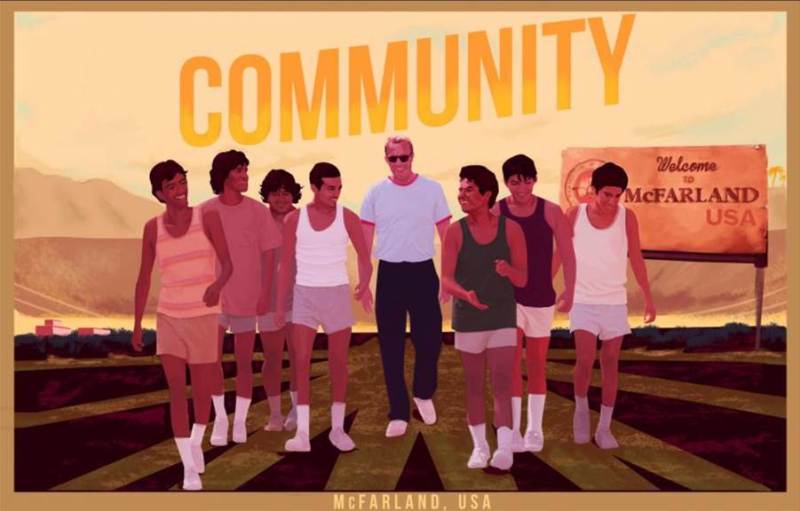 Last week I had the opportunity to see an early screening of MCFARLAND, USA, the latest live action film from Disney Pictures. The movie stars Kevin Costner as Jim White, a high school football coach who is forced to transfer schools after a disciplinary incident.

Synopsis from Disney: Based on the 1987 true story, “McFarland, USA” follows novice runners from McFarland, an economically challenged town in California’s farm-rich Central Valley, as they give their all to build a cross-country team under the direction of Coach Jim White (Kevin Costner), a newcomer to their predominantly Latino high school. Coach White and the McFarland students have a lot to learn about each other but when White starts to realize the boys’ exceptional running ability, things begin to change. Soon something beyond their physical gifts becomes apparent—the power of family relationships, their unwavering commitment to one another and their incredible work ethic. With grit and determination, the unlikely band of runners eventually overcomes the odds to forge not only a championship cross-country team but an enduring legacy as well. Along the way, Coach White realizes that his family finally found a place to call home and both he and his team achieve their own kind of American dream. 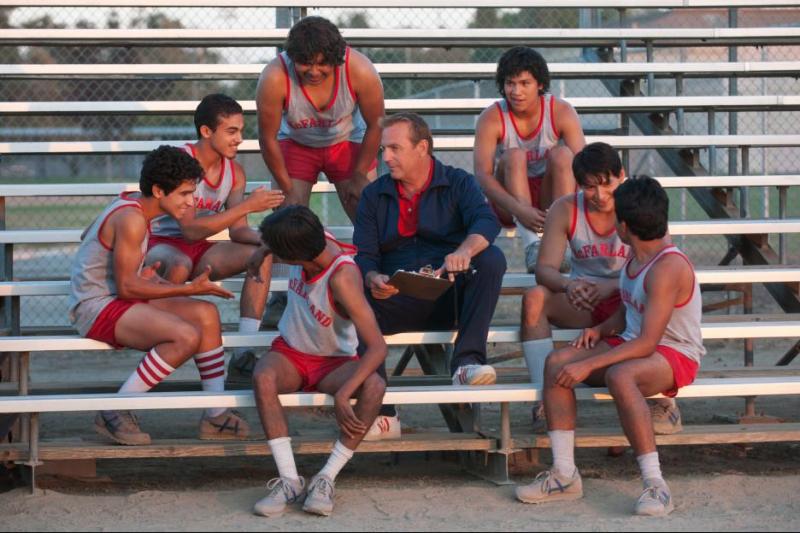 Costner plays the character well and has great on-screen chemistry with his students, played by Carlos Pratts, Michael Aguero, Rafael Martinez, and Ramiro Rodriguez. During the movie the cross-country team often runs across scenic areas of California, gorgeously captured by the director Niki Caro. With a running time of about two hours, the story moves along quickly and I was never bored.

MCFARLAND, USA follows in the inspirational-sports-movie footsteps of last year’s MILLION DOLLAR ARM, which I also enjoyed, although I would say ARM was trying harder to bring the laughs. MCFARLAND, USA had its light-hearted moments, but for the most part the story stayed serious and to-the-point.

Overall I think this is a well made, inspirational movie that adults and teens would enjoy. It’s worth seeing in the theater for the beautiful California scenery alone.

For a look at the making of MCFARLAND, USA, check out Babes in Disneyland.

You can watch an extended clip of MCFARLAND, USA here:

Last but not least, check out a few of these fun facts about the movie:

– “McFarland, USA” is inspired by a 1987 true story, in which an unlikely band of
inexperienced, under-equipped, young Latino runners with exceptional
determination rise to become cross-country state champions under the
leadership of their coach, Jim White. Over the years since then, the McFarland
High School cross-country teams have won nine state championships and the
small school is considered a powerhouse in the sport.

– Coach Jim White is retired now, but if you go to McFarland, chances are you will
see him out there on his bike, keeping up with the kids every evening with a lot
of his original team running alongside as well. White retired in 2002 after
teaching in McFarland schools for 40 years and coaching for 25 years.

– A number of the original runners on the championship 1987 cross-country team
became educators in the McFarland school district. The former teammates are
not only working in their hometown, but also raising their families there and
actively supporting the cross-country teams of today by coaching, helping out
with the meets and practices and donating goods or money so the teams have
what they need.

– Three out of the seven young actors on the team in the movie are from the
McFarland area—Sergio Avelar who plays Victor Puentes and Michael Aguero,
cast as Damacio Diaz, are actual runners and Ramiro Rodriguez, as Danny Diaz,
was a champion soccer player.

– Ramiro Rodriguez had no intention of auditioning when he agreed to drive his
cousin to the casting tryouts for “McFarland, USA.” He landed the role of Danny
Diaz after being pestered repeatedly by executive producer Mario Iscovich to
audition.

– Sergio Avelar is a bona fide runner and a member of the McFarland Track Club.
He has been running since 2001 and considers himself a “decent runner.” One of his
coaches in middle school was actually Thomas Valles, the real-life person
represented by the role that Carlos Pratts plays.

– Actor Rafael Martinez, who is by nature soft-spoken and polite, admits that he
cut school in order to audition for the movie. Needless to say, having won a role,
he has no regrets.

– Prior to the start of principal photography, director Niki Caro organized an
informal gathering for the on-screen White clan that proved insightful for her
and the actors. In pre-production she assembled the actors together—Kevin
Costner, Maria Bello, Morgan Saylor and Elsie Fisher—and had them play
Monopoly as a family unit. The interesting exercise kick-started a family dynamic
that lasted for the entire shoot.

– Kevin Costner, who plays Coach White, was a great hit with the young actors. He
quietly mentored them and offered advice if they wanted it but for the boys,
listening to Costner’s stories and watching movies with him in his trailer was a
highlight. They felt so comfortable with the famous movie star that they even
nicknamed him “KC.”

– Like the real McFarland team, all seven young actors had to train to become
champion runners. Although some had more track and field experience than
others, all of them took their drills very seriously. Mark Ellis, the coach hired to
train them for the film, would have it no other way and the team evolved over
time. But training them wasn’t as simple as merely putting shoes on their feet.
Every morning at 8 a.m. the runners showed up for practice, which was literally
running and more running to build up endurance.

– In the script, the character Thomas Valles, played by Carlos Pratts, is a natural
runner with prodigious talent. But the reverse was true for Pratts, who zealously
prepared for the cross-country scenes and in the process, became a runner. In
addition to drills with the film’s running coach, Mark Ellis, Pratts worked out with
personal trainer Brian Nguyen. Nguyen famously got Mark Wahlberg into boxing
shape for “The Fighter” and did likewise for Pratts.

– The production took the cast and crew to some of the most beautiful spots in
Southern and Central California, from Lake Castaic to Malibu to the Griffith Park
Observatory, in addition to the fields and neighborhoods of Bakersfield and
McFarland.

– There were some unique cinematic opportunities in the filming of the movie,
especially the embankments of almonds covered in protective plastic that served
as training hills for the team. The expanse of these weird mounds across the landscape was visually arresting and certainly emblematic of McFarland, home
to Blue Diamond Almonds.

– Classic lowriders are featured in “McFarland, USA” in several scenes. Lowriders
are custom cars fitted with hydraulic jacks that allow the chassis to be lowered
almost all the way to the road. Lowriding was very big in California’s Central
Valley in the mid-’80s with Bakersfield being one of the lowriding epicenters of
the area. Lowriding is often stereotypically depicted as gangster-related in film
but the reality is that these car clubs are essentially about family and community
and the cars are lovingly treasured.

– Director Niki Caro took particular interest in the “hero-car” lowrider vehicle—
and not just in the service of the movie. The car actually belongs to Caro and she
likes to drive the 1970s Chevrolet Caprice, which was customized to the movie’s
specifications. The beautiful classic features an iconic chain steering wheel and a
mural on the hood that is in the likeness of the owner’s girlfriend in the film,
Lupe. The painting is in the style of the Virgin of Guadalupe, which is an ongoing
visual theme in the movie.