Skip to content
This Fairy Tale Life is reader supported. When you buy through links on our site, we may earn a monetary commission. Learn more.
845 Shares
Tweet
Share165
Pin680
Share
You’re planning a trip to The Disneyland Resort … quick, do you know where the best photo walls are? If you’re on Instagram you know that taking photos in front of pretty walls is currently A Thing, and it’s no exception at the Disney Parks. Sure, Magic Kingdom has its famous Purple Wall and Epcot has its Bubble Gum Wall, but Disneyland has PLENTY of our own walls, thankyouverymuch. Use this guide to find them all and plan your outfit changes accordingly.

A Definitive Guide to the Disneyland Wall Photo Spots 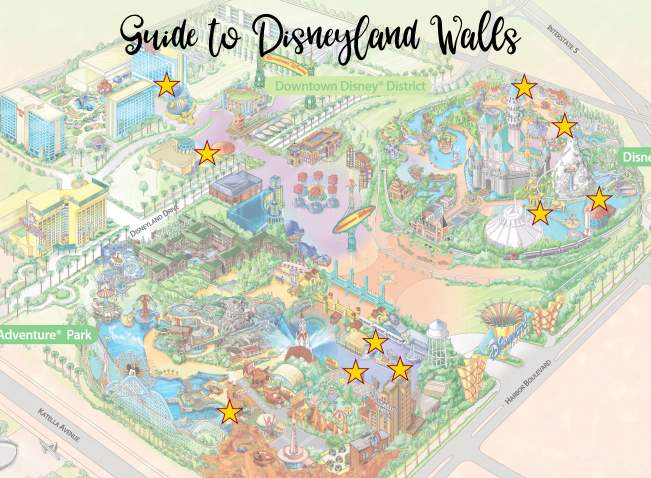 Small World Wall – The Small World Wall features light blue and white geographic shapes similar to the façade of It’s A Small World. It’s actually a huge door that leads to the backstage area, and you’ll often see Cast Members (and sometimes even characters) going in and out of a smaller door on the left side. It has become a popular photo spot so be prepared to wait your turn! 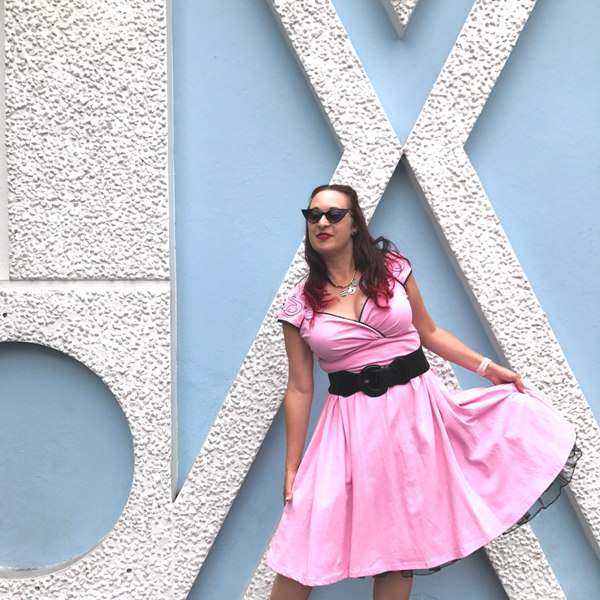 Where to find it: If you’re looking directly at It’s A Small World, the wall is to the left. 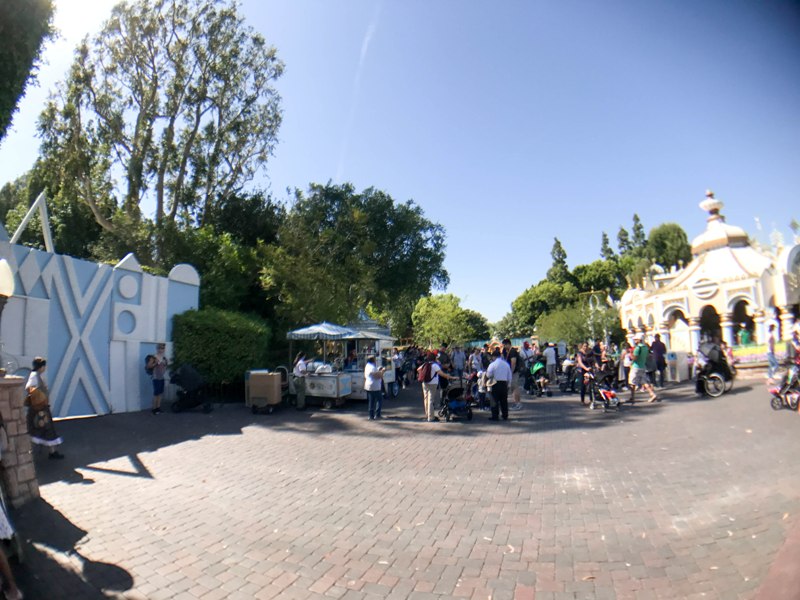 Star Wars Wall – At the exit of Launch Bay in Tomorrowland is a huge mural of the words “May the Force be with you” which has become a popular photo spot for Star Wars fans. 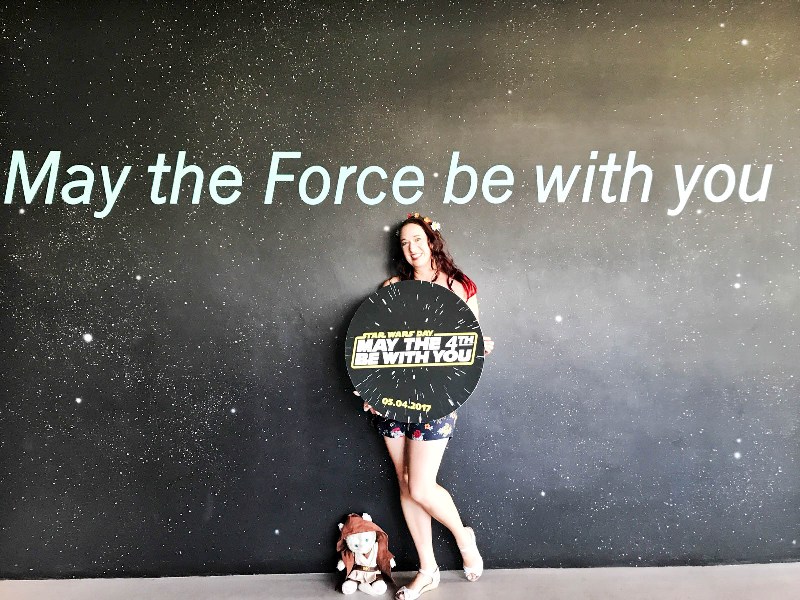 Where to find it: Either look for it as you’re exiting Launch Bay (you can’t miss it), or walk directly to it to the left of the Launch Bay entrance on the outside, near the path to the Autopia queue. 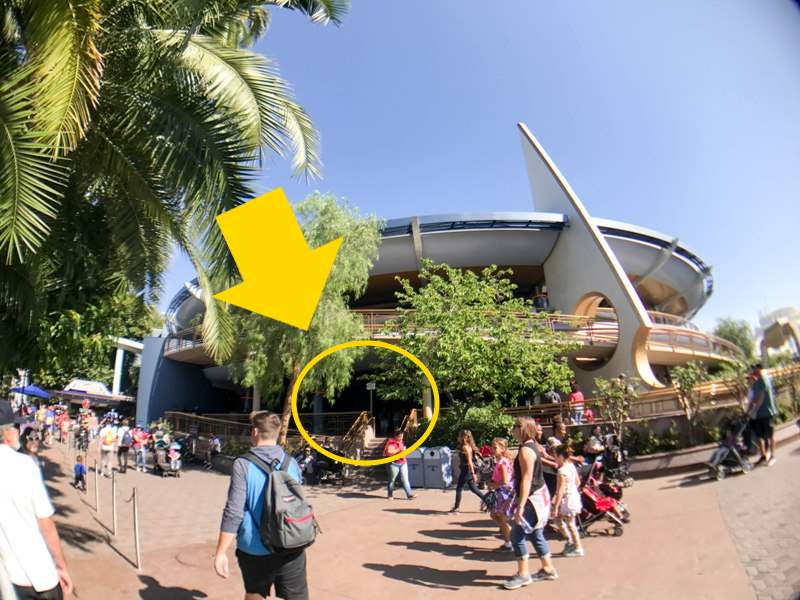 Instagram – No dedicated hashtag but you can use #StarWarsWall or #GalaxyWall

Spaceship Wall – I’m not sure this is an “official” Disney Wall but I like it. I have dubbed it Spaceship Wall. 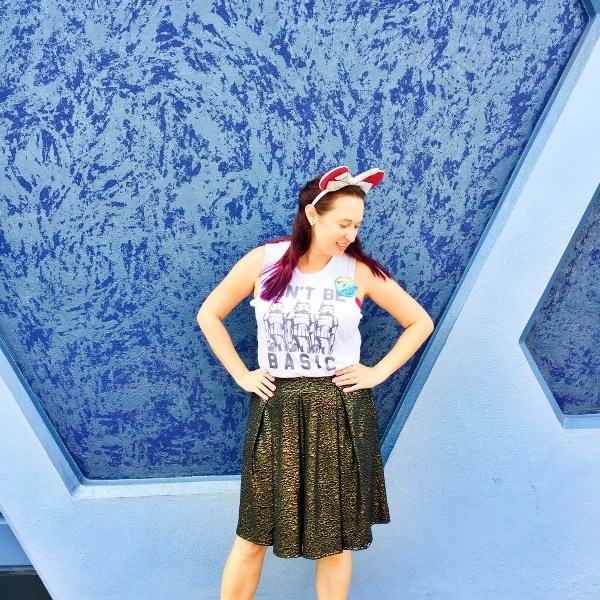 Where to find it: Between Star Tours and the entrance to Star Traders in Tomorrowland, under the solar system mural which would be a fantastic Disney Wall if it was just a bit lower. 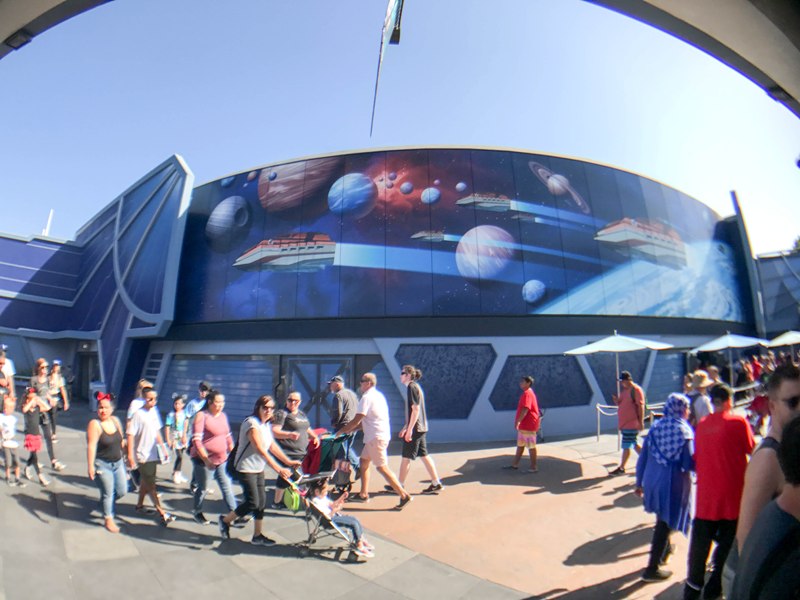 Toontown Doors – The oversized doors next to Minnie’s house make a great spot for some playful photos. (Note – Disneyland has begun covering these doors with cute murals!) 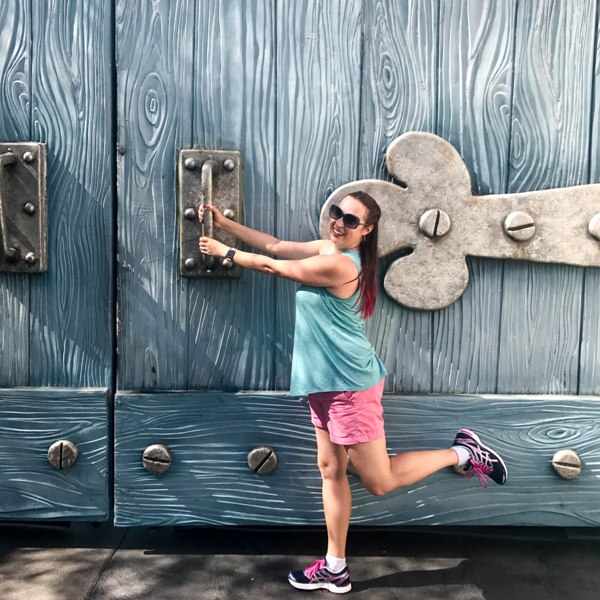 Where to find it: Walk towards the back left of Toontown; you’ll find the doors to the right of Minnie’s house. 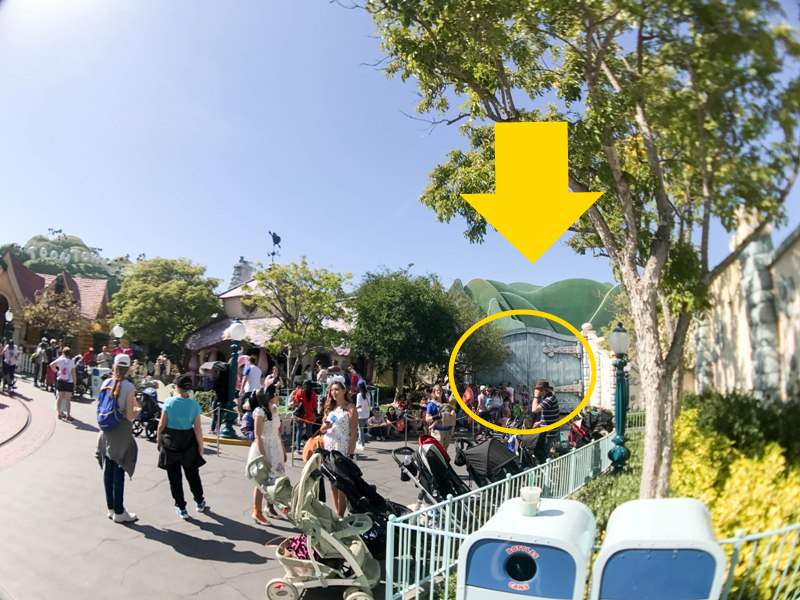 The Blue Wall – The Blue Wall is perhaps the most famous photo wall in DCA and for good reason – it’s the perfect shade of blue. 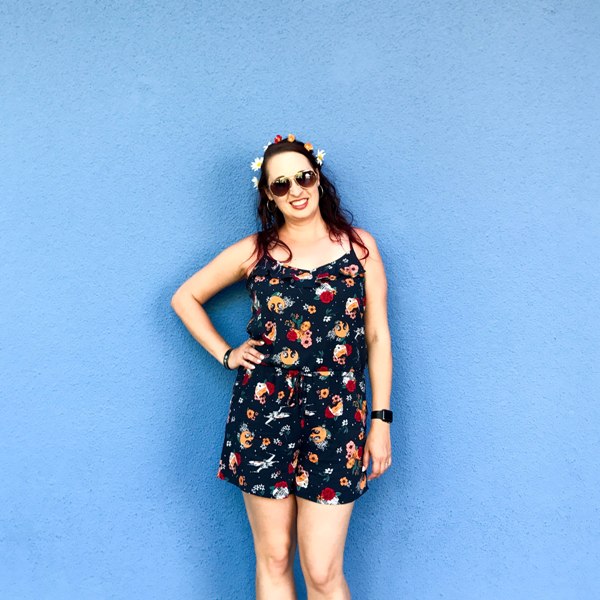 Where to find it: It’s located on the outside of the Mickey’s PhilharMagic theater in the Hollywood Backlot area. There is another blue wall in the back of Hollywood Backlot, where the Mad T Party arcade used to be. I have often seen this area blocked off for special events, though. Which is why I recommend the blue wall outside the theater.

(UPDATE MARCH 2019: The “real” blue wall has been replaced by the Captain Marvel meet and greet experience. You can still find my original blue wall on the outside of the theater in the Hollywood Backlot area.) 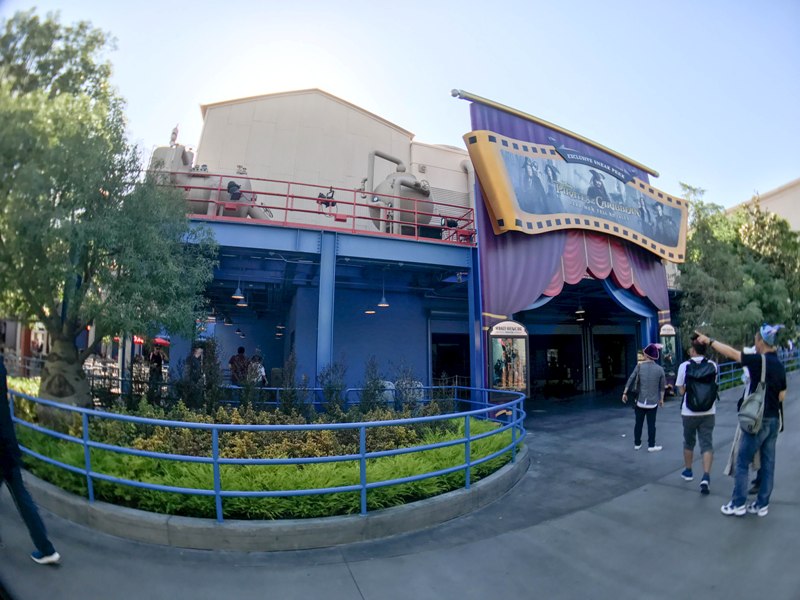 Sunset Wall – Sunset Wall is a small space with lots of structures casting shadows on the wall, so the best time to take photos here is …. at sunset. (Note – this area has been reimagined as a Marvel meet-and-greet area, but may return once Avengers Campus opens!) 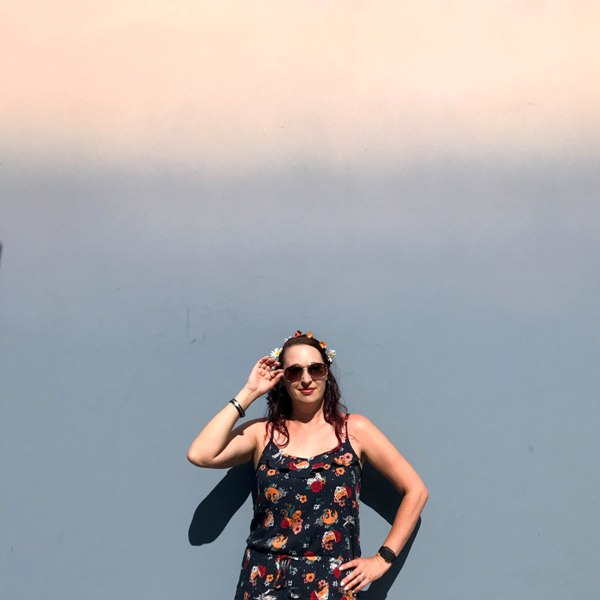 Where to find it: Next to the restrooms in the back of the Hollywood Backlot area, across from the Marvel meet and greet spot. 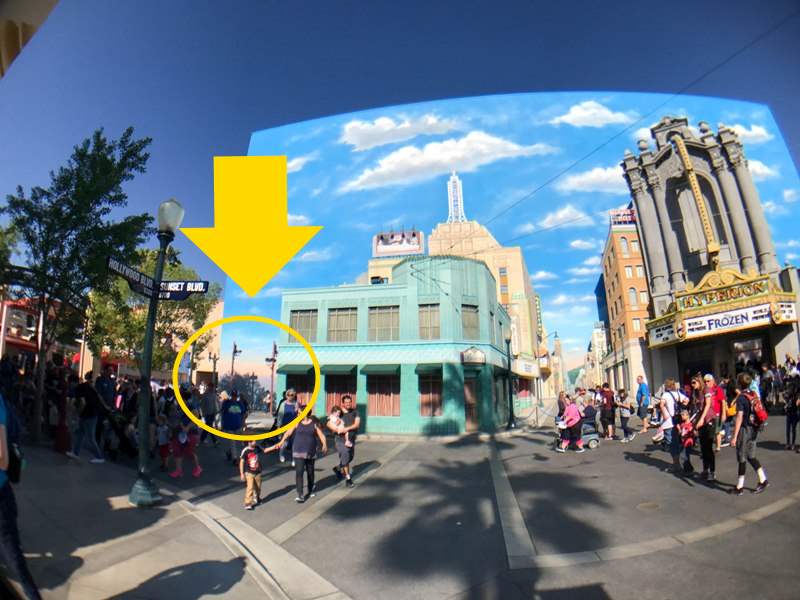 “Happily Ever After” Wall – Made popular in engagement photos, the “Once Upon a Time” and “Happily Ever After” walls are located in the Animation Building in the Hollywood Backlot area. Be aware the lighting is not the best in these spots. A flash can help, although flashes are annoying for the guests trying to enjoy the show inside the building. 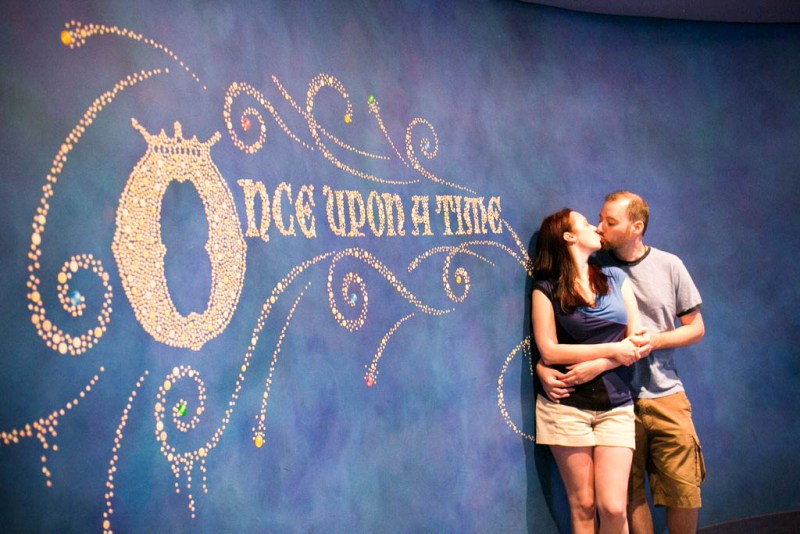 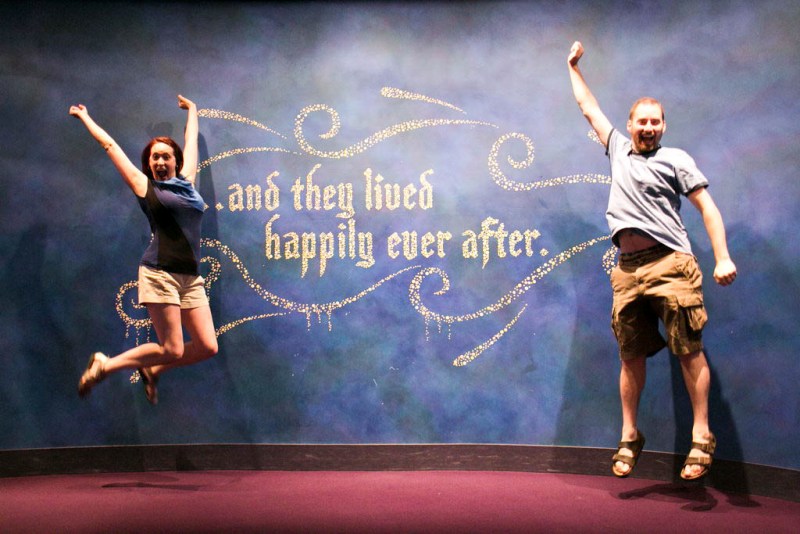 Above two photos by Root Photography
Where to find it: Walk in the entrance to the Animation Building and you’ll see “Once Upon a Time” and exit the building for “Happily Ever After.” (You can also access the “Happily Ever After” wall by walking through the Off the Page gift shop.) 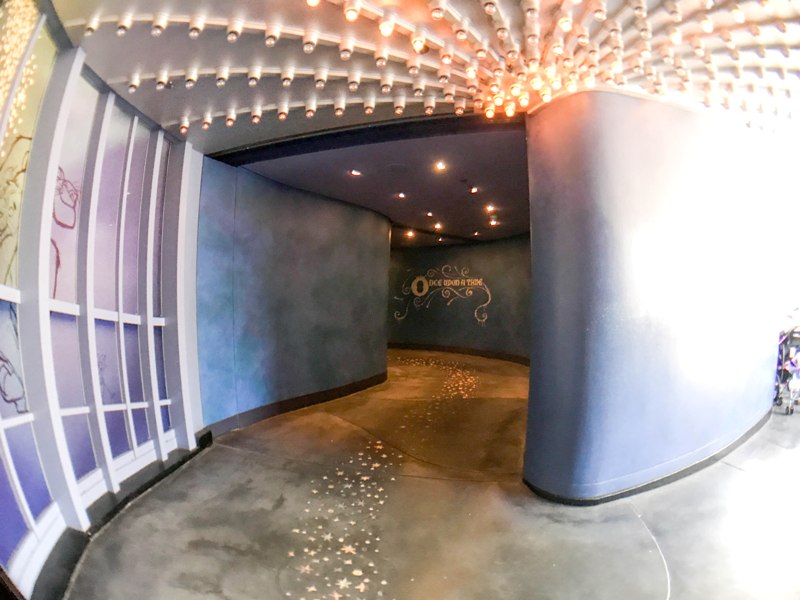 Orange Bird Wall – A fairly recent addition to the Disney Wall family, this orange and yellow wall is reminiscent of the Orange Bird mascot at Walt Disney World. 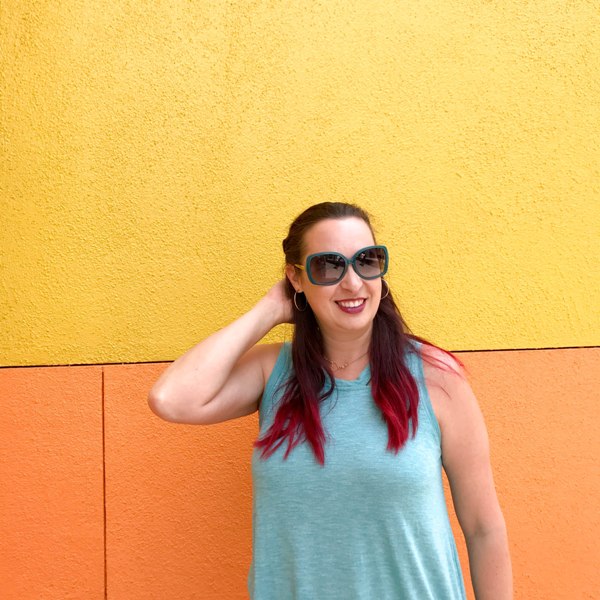 Where to find it: Between the Lego Store and the restrooms. There’s also a huge Starbucks mural across the walkway, so you can do two walls in one place.

Attraction Poster Bathroom Wallpaper – Just like the name says, most of the bathrooms at the Disneyland Hotel feature an amazing wallpaper with a collage of vintage attraction posters. And they are themed to the towers – Fantasy, Adventure, and Frontier. The prettiest colors are all located in the Fantasy Tower, though. 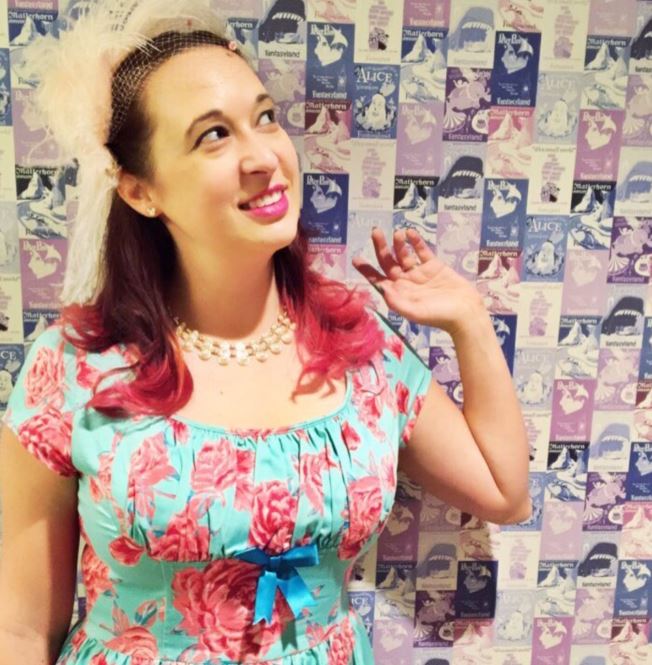 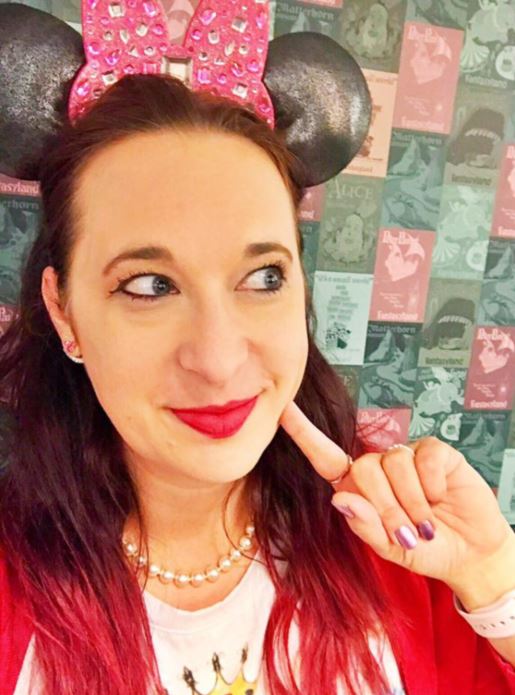 Where to find it: The small bathroom near the lobby in Fantasy Tower features shades of pink and purple, while the bathroom near Steakhouse 55 (which has a large vanity area with better lighting for photos) has shades of green. Get your selfies on!

Did I miss your favorite wall? I’ll keep this post updated as new walls are discovered, so tell me your favorites in the comments! 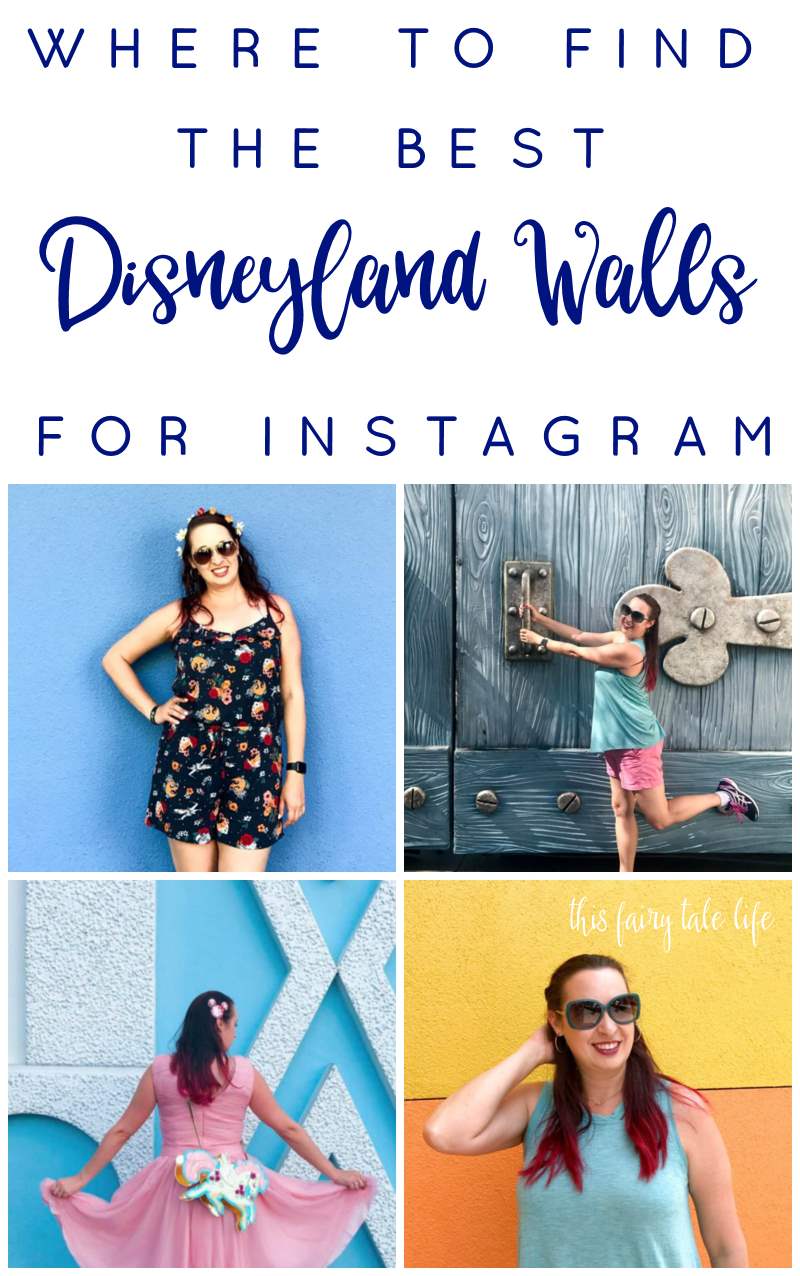