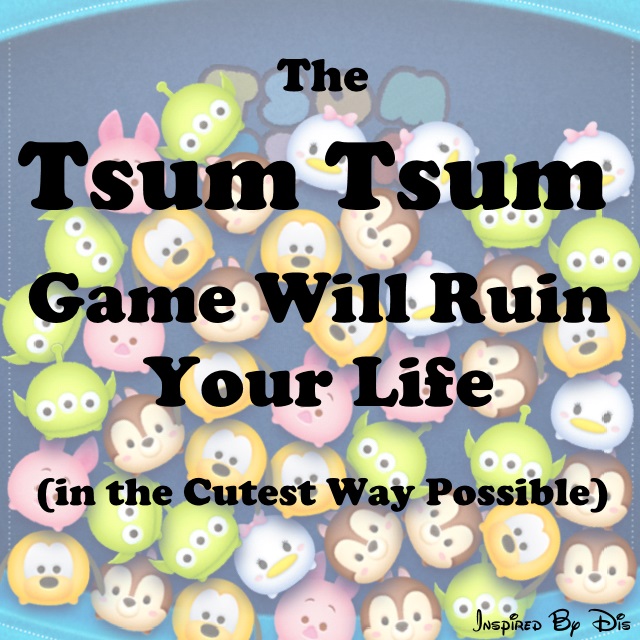 Hello, my name is Mindy, and I am a Tsum Tsum game addict.

In the past I have played my fair share of Facebook games and iPhone games, but when I started blogging as a business, I gave them all up. Too distracting. I never even played Where’s My Water? or Maleficent Candy Crush or whatever else was the latest game fad. But Tsum Tsums? Yeah. The Tsum Tsums got me.

BTW – Plush Tsum Tsums are now available at US Disney Stores and online. Have you bought them all yet? (affiliate link) Two days ago, against my better judgement, I downloaded the Tsum Tsum game on my iPhone. And I said “I’ll just play one game.” And next thing I know, it’s 1am. I force myself to go to sleep. And I dream … of stacking Tsum Tsums (which, if you didn’t know, is Japanese for “Stack Stack”).

Tsum Tsum is a puzzle game, where rows and rows of various adorable Disney character Tsum Tsums fall from the sky, and you have to clear three or more similar Tsums to earn points and coins. Use your finger to connect three or more Tsums and they POP away, and more fall from the sky. The longer chain you can create, the more points and coins you receive. Points … coins … must … have …. 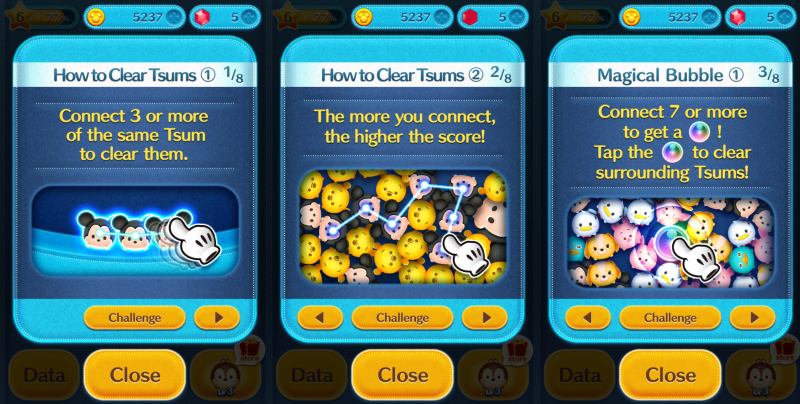 Signing up was a little confusing for me, so I’ll try to walk you through it. First you need to download the LINE app. LINE is a free talk and text app, and you will need to keep it installed on your Android or iOS device if you want to keep connecting with new friends. Create a LINE account and you will need to do a text message AND email verification. Then you need to go back into the LINE app to set your user name. NOW you can go to the Tsum Tsum app and log in with your LINE account. Whew. Seems complicated and maybe there’s an easier way to do it, but that’s what I had to do.

After watching the super cute animation (video above) after you start the Tsum Tsum app, you are presented with your first Tsum Tsum – Mickey Mouse! From there you can start your first 60 second game. You’ll probably do pretty poorly, and you’ll tell yourself “let’s just try one more time.” Luckily you only get 5 hearts (games) and hearts regenerate every 15 minutes, so you can’t spend ALL day playing the game. BUT, if you add friends who are also playing, you can send each other hearts. And if you accept your hearts fast enough, you get bonus coins. So you have to keep checking the game, like, every hour …. Ahhhhhhhhhh!

And then you want to collect ALL THE TSUMS but to do that you have to earn coins by playing. A Happiness Box containing a random Tsum costs 10,000 coins. And I earn around 100 coins per game … so that’s about 100 games in order to earn a new Tsum. *crying emoticon*

Here are the best tips for earning points and coins I’ve discovered so far:

+ Use both thumbs! Not sure if this is obvious to master gamers, but me as a non-game was using my POINTER FINGER for my first few games. Then I switched to my thumb, then I started using both thumbs in an attempt to clear Tsums faster.

+ At some point the game will ask you to leave a review for the game and earn rubies. DO IT. You’ll get 10 rubies, which is the equivalent of 6000 coins, just over halfway to a Happiness box!

+ MAKE FRIENDS! You can connect with friends via the LINE app, and then invite them to play Tsum Tsum. When you invite a friend, you get coins. Then, you can send hearts to your friends. If you collect the hearts sent to you within an hour of being sent, you get 200 bonus coins. So, more friends = more coins = MORE TSUMS!!

+ If you connect 7 or more Tsums, a bubble will appear. If you touch the bubble, the Tsums around it will clear! Bonus tip: If you have unpopped bubbles at the end of the game, the game will pop them as a bonus. So focus on connecting Tsums and only pop if you have no Tsums to connect.

+ As you connect Tsums, a meter at the bottom will fill up. When it reaches capacity, your game will enter FEVER time, where you get bonus points for everything you do. Try to hurry and do your best work during fever time, which lasts 10 seconds. BUT NO PRESSURE. 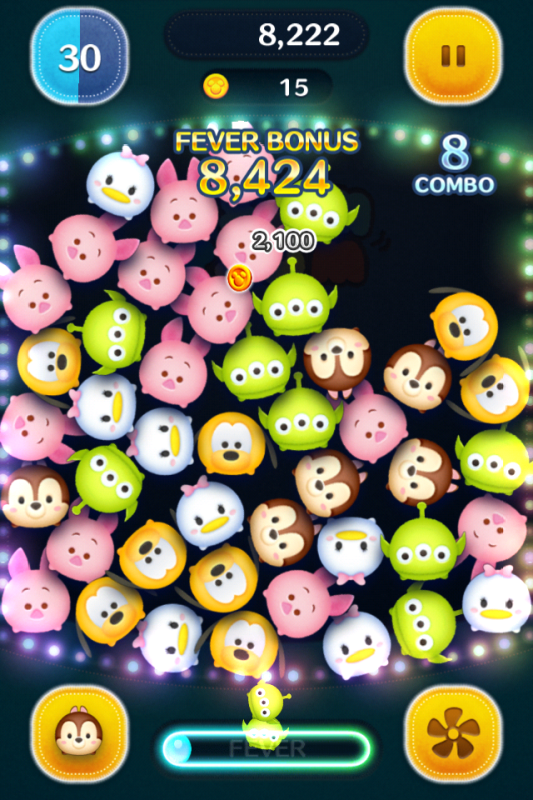 + Another tip is to watch your Tsum’s power level. When it’s full, click on your Tsum icon to activate it’s special skill. Each Tsum has a different skill. For example, Mickey will clear all the center Tsums, giving you a boost of points and coins. Try to save this skill for FEVER TIME!

+ Watch for big Tsums! They randomly appear (or maybe it’s not random but I haven’t been able to figure out a pattern). Big Tsums are the equivalent of 5 regular Tsums. 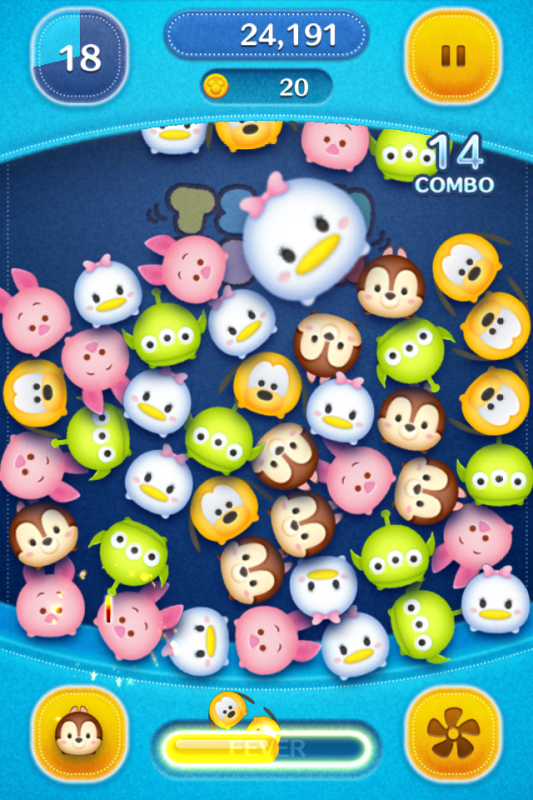 + My final tip is to NOT spend money on this game. You’re going to really want to. Seriously, don’t do it. Too expensive! You will want to buy all the Happiness Boxes to get more Tsums because they are so darn cute. But the Happiness boxes cost about $2 each and the Premium boxes cost approximately $5 each. A lot of money for pixels. So just don’t do it. RESIST THE TSUMS.

PS – Be my friend, my user name is mindyjoy, all lowercase letters. My score will probably make you feel better about yourself. 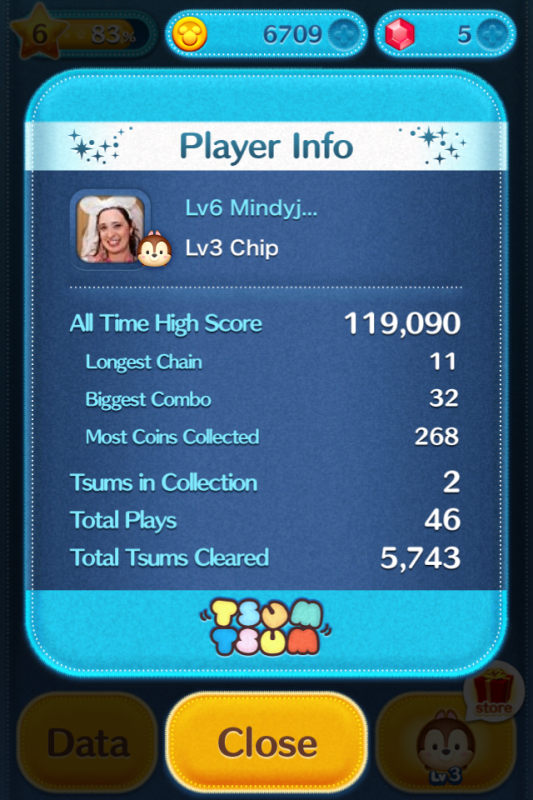 Here’s some new advice and tips now that I’ve played a while, as well as a review of Tsums I’ve played:

+ Buying rubies to try to get a high score is a waste. I cry now when I think of how many times I did this. Really, who cares about your score? It’s all about the coins and collecting Tsums.

+ You can get a lot of friends by joining a Tsum group on LINE. I am in just one group and I have 100+ friends. Why do you want friends? The more friends you have, the more hearts you can send/receive. Collect those hearts within the hour and collect 200 coins. I have more hearts than I’ll ever need at this point, and I can generally buy at least one Happiness box per day now. The group I’m in is “Disney Tsum” and two others I’ve seen are “tsum tsum” and “Tsum Pin IG.” All of these groups found me so I’m not sure how to search for them. If you need help joining groups and connecting with Tsum Tsum friends, please follow the User IDs in the comments and feel free to leave a comment with your own User ID. You can also join a Facebook group like this one. **Please note I am no longer adding people to Tsum Tsum LINE Groups because the requests became too overwhelming. However some of the nice people in the comments should be able to help you.**

+ When I first started playing I didn’t quite understand how the Skill level works but now I do. Each Tsum starts at a Skill level 1 and goes up to level 3. If you buy a box and get a duplicate Tsum, that Tsum’s Skill level will go up by 1/2 level. So getting duplicates (of good Tsums) is a REALLY GOOD THING.

Mickey – Mickey is the default Tsum and he clears the Tsums at the center of the screen. It’s pretty basic and not all that impressive at skill level 1.

Minnie – Turns random Tsums into Mickey Tsums, which can be cleared with Minnie Tsums. The problem is that, unless those random Tsums are already next to Minnie Tsums, they don’t really do much good.

Goofy – Goofy clears a bunch of Tsums at random. Again, on skill level 1, not all that impressive.

Chip & Dale – Chip and Dale are my favorite Tsums so far. Chip turns the center vertical row of Tsums into Dale (which can be cleared with Chip), and Dale turns the center horizonal line of Tsums into Chip (which can be cleared with Dale). Still following? Basically you are given an entire row of the same Tsum, which means you can potentially clear a row of 10-15 Tsums and get mondo points and coins. Try to do this during Fever time!

Eeyore – Like Minnie, Eeyore turns random Tsums into Eeyore Tsums. Unlike Minnie, you can’t clear them with any other character, so I’ve found that at the beginning, this Tsum is pretty weak.

Scrump – Scrump basically picks one of the other Tsum’s skill at random. As a Type A strategist, Scrump just doesn’t mesh well with me.

Lady – Lady’s skill is to turn the screen a distracting pink and white stripped pattern and during this short time, you get extra coins for whatever you do. If you play your strategy right, you can rack up a lot of coins with Lady. I average between 200-300 coins per play, where as the others I average maybe 150-200.

Marie – Marie creates random bubbles, and we all know bubbles pop Tsums and earn you easy points and coins, especially during fever time. So set off Marie’s skill whenever it’s ready but save the bubbles for fever time for max points/coins.

Mike Wazowski – Mike is my favorite Tsum so far. Mike clears a big vertical column of Tsums and when done during fever time, I can really rack up the points and coins. It’s quick and easy, and the clearing usually always results in another bubble.

Tell me in the comments which Tsums you like and why?