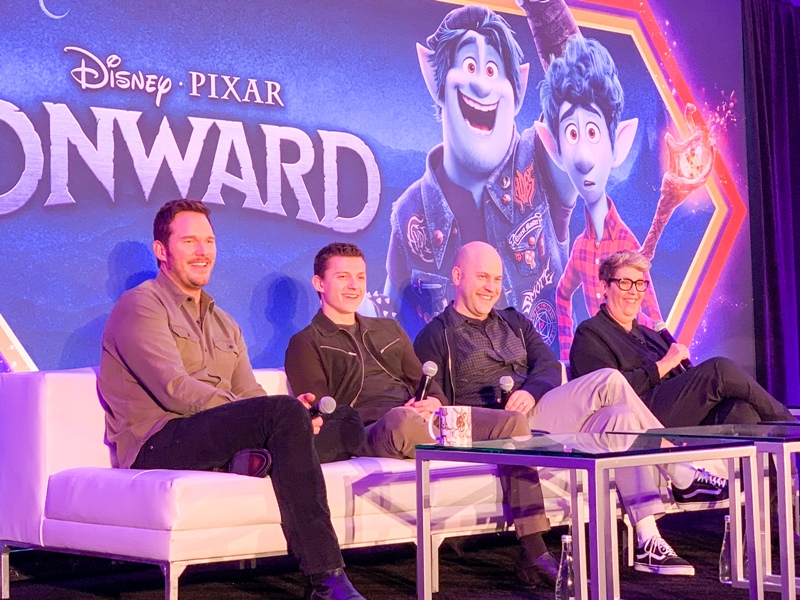 I’ve been looking forward to Disney/Pixar’s Onward so much, even before my visit to Pixar to learn how the film was made! I’m so glad I was invited to attend this press conference with the creators and cast of Onward. It’s always fun to hear directly from the magic makers behind these movies!

When teenage elf brothers Ian and Barley Lightfoot (voices of Tom Holland and Chris Pratt) get an unexpected opportunity to spend one more day with their late dad, they embark on an extraordinary quest aboard Barley’s epic van Guinevere. Like any good quest, their journey is filled with magic spells, cryptic maps, impossible obstacles and unimaginable discoveries. But when the boys’ fearless mom Laurel (voice of Julia Louis-Dreyfus) realizes her sons are missing, she teams up with a part-lion, part-bat, part-scorpion, former warrior – aka The Manticore (voice of Octavia Spencer) – and heads off to find them. Perilous curses aside, this one magical day could mean more than any of them ever dreamed. 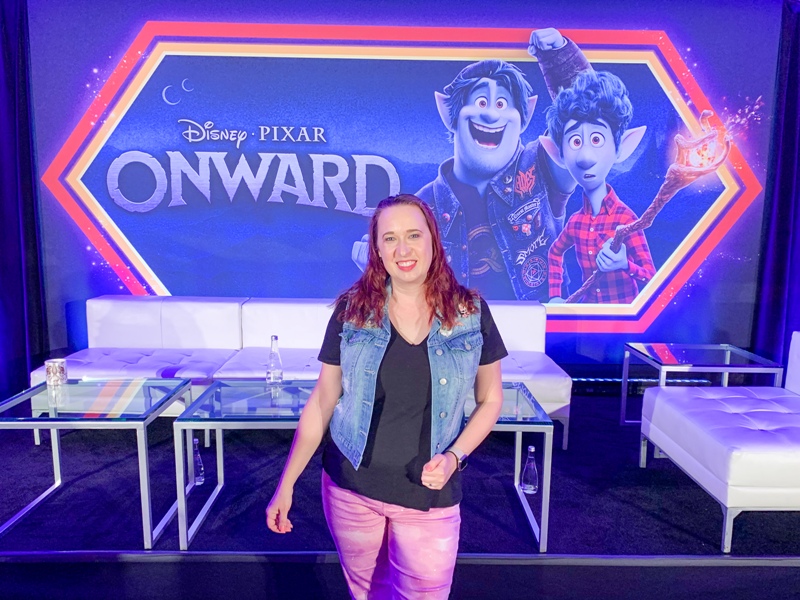 Interviews with the Creators and Cast of ONWARD

HOW DID THE STORY OF ONWARD BEGIN?

Scanlon: It’s a very personal story. Much like the characters in the movie, my father passed away when I was about a year old and my brother was three, so as you can imagine we don’t remember him at all, but we always wondered who he was and how we were like him. I think that question became the seed of ONWARD, which is, what if you could meet him, what if you could have one day, what would you learn and what would you ask? And then we added elves and sprites to that sad story.

We needed a way in which this father could come back to life, that was really the reason behind the magic. We could have done a version, and even considered one, where the boys were scientists and they built a machine that brought dad back, and the magic just felt more romanticized. And again, we didn’t want to set it in an old timey fantasy world because it’s a very modern story and if these boys had all been in robes and their father was in robes it just would have been ridiculous. So we thought, let’s do a modern one. And like you said, there’s a sort of natural humor that comes out of that, and I think the world mirrors Ian in a lot of ways, like the world of this movie are people who have, just becoming kind of complacent and even fearful of taking risks, they’ve lost their potential. And Ian is a kid who has never lived up to his because he’s insecure and fearful. So it’s always nice when the world and the characters can kind of mirror (each other). That and we just wanted to show garbage eating unicorns. 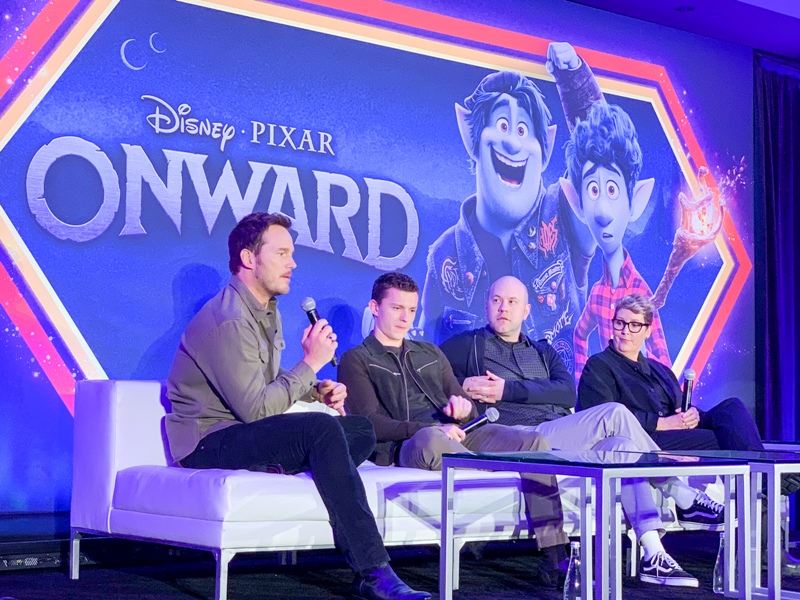 HOW DID THE CAST BRING ONWARD TO LIFE?

Rae: Thanks to these two amazing gentlemen (Pratt and Holland) and the rest of the cast, what we found is how invested everybody got in the film, I think because it was based on this personal story that was very emotional. Everybody was very into it and into the role that they had. Octavia Spencer, she had a challenging role as the Manticore because it’s basically two characters but she just brought it and was amazing. Julia (Louis Dreyfus), obviously so incredibly funny, portrayed Laurel Lightfoot in such a humorous but beautiful way. And then Tom and Chris, just amazing, we are forever grateful for how much they invested themselves into the roles and how they really really took the characters and elevated them and made them so much more complex and real, it’s amazing.

Scanlon: When we originally wrote Ian he was originally more, at times, sarcastic, and Tom brought a sincerity to him and a vulnerability to him that was crucial in a way I didn’t quite understand, it just naturally comes from him. And Chris, was very protective of Barley. Barley is kind of a goofball and a crazy character, and we’d re-write scenes where we’d be like ‘and then Barley’s pants fall down!’ and Chris was always like, ‘well, he’s not an idiot. He’s a well intentioned guy who is trying to help.” And he was a protector of Barley as a character and a human being, or an elf, and that’s what, I think in any writing but especially in animation, you live with these characters for a long time and then the performers come in and they make them real and they give them heart.

DO YOU RELATE TO YOUR ONWARD CHARACTERS?

Holland: It’s interesting, I’m the oldest brother of four and Chris is the youngest brother of two, so we kind of switched. I’m playing the younger brother and he’s playing the older brother, so it’s really nice for us to make that switch. And because Chris and I are so close already, before we even came onto this film, it was almost like we were just playing ourselves. But the similarities between Ian and myself go back to more when I was more in my early teens, 12, 13, I was a little bit of an introvert, I was a nervous kid. And I had a hard time at school. And it wasn’t until I went on this adventure that was Billy Elliot, where I sort of came out of my shell and I became more confident in myself and I believed in myself. And what drew me so much to this character was that we get to see that entire journey that I went on as a kid, in him.

Pratt: One thing that I really like in seeing, and I’m not sure it was intentional or if I noticed this while watching the movie, but it was a note that Dan gave me that was actually against my own instinct, but I’m very glad we went with it, which was Barley was never jealous of the fact that he didn’t have the magic gift. And I think that, to me, was something very similar to my own relationship with my brother, in which I was the Ian. And my brother, for instance, always wanted to be an actor. He was an actor, he did plays … and I was like ‘Wow that’s amazing, being an actor is awesome, I want to be an actor.’ My brother did all these assemblies in high school so I like followed his footsteps and I did all the assemblies. Anyway, he went into the Army, he didn’t become an actor, but I became an actor, and there was that moment where Barley realizes Ian has the gift. And he comes in, and my instinct was, ‘Do you think Barley wishes he had the magic gift? Because he’s the one who loves magic.’ And I think this is really the heart of the film because he loves his younger brother so much that he’s just so proud of him. That he has this gift. And when I saw that in the movie, how it was expressed, it made me really appreciate how my brother was with me. Because my whole life and during my whole career he’s only ever been super encouraging and positive about what I’ve been able to do as an actor. And I think that’s what makes this brotherhood and relationship so special. 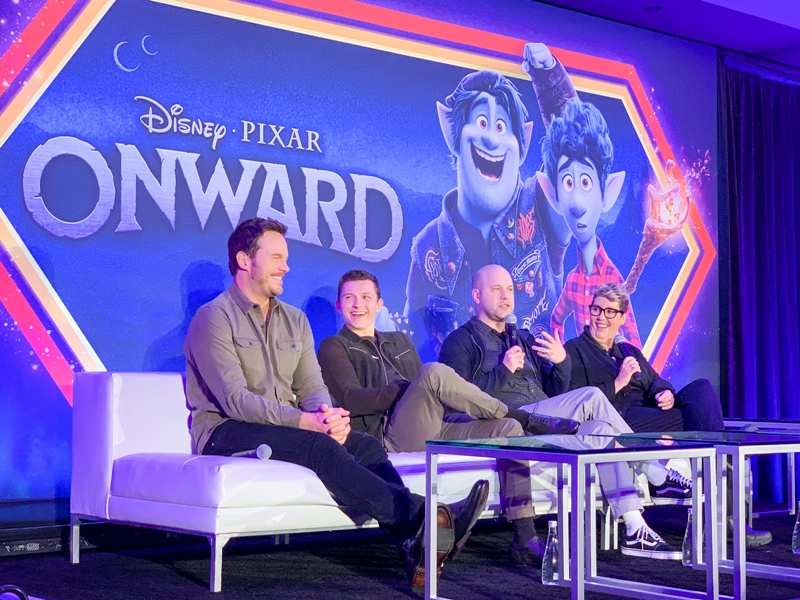 IF YOU COULD BRING ANYONE BACK TO LIFE FOR ONE DAY, WHO WOULD IT BE?

Scanlon: Probably my dad, and maybe take him to see the movie and he’d say, “meh.” [LAUGHTER] No, I mean, spending a day just talking, walking around, and also letting him know what a phenomenal job my mother did at raising us, and how she gave us everything we ever wanted. Yeah.

Holland: My granddad, Bob, he actually never met his dad. His dad passed away when he was 18 months. I would bring back my great-grandfather so my granddad could have the opportunity to meet his dad.

WHAT DO YOU WANT PEOPLE TO TAKE AWAY FROM THIS MOVIE?

Holland: I think the film is kind of a metaphor for like, look out, the world is an amazing place, it’s a beautiful place. Experience through your own eyes, not through someone else’s Instagram account.

Scanlon: It’s a film about support and the people that go above and beyond in our lives to help us become the people we are today, so it’s absolutely about walking out of the theater and thinking, ‘who are those people in my life?’ And they don’t have to be family members, a lot of times they are friends or teachers. And I would go one step further and think, ‘how can I be that for someone else?’

We also were shown a sneak peek at Onward merchandise that will be for sale soon! 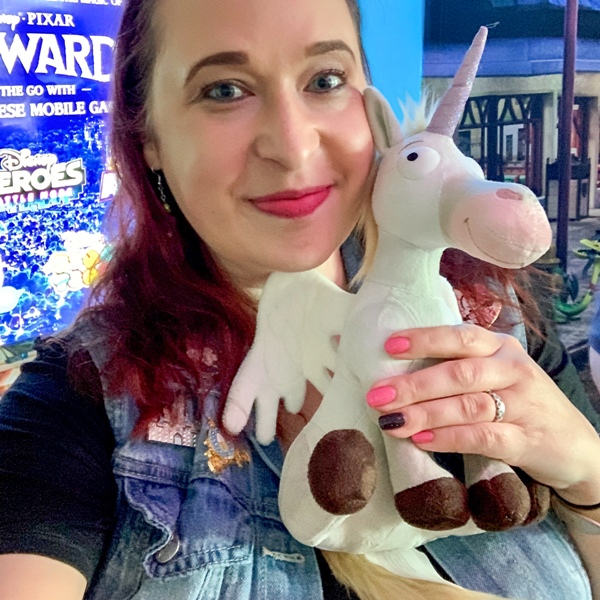 We also got to tour Barley’s trusty steed – er, I mean van – Guinevere! So fun! 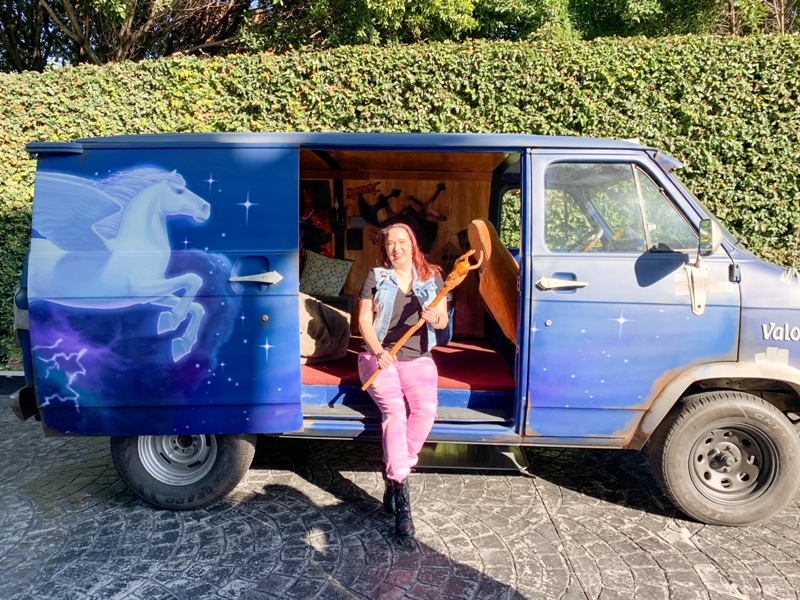 Pixar’s Onward is in theaters March 6, 2020! Are you excited for the film?