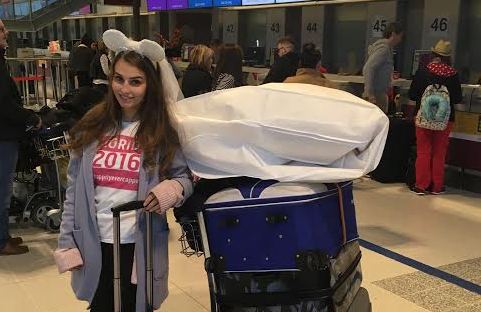 Does the thought of taking your wedding gown on a plane make you extremely nervous? It’s likely the most expensive piece of clothing you will ever own so I don’t blame you. Since we live local to Disneyland I didn’t have to worry about this. The most I had to worry about was my dress getting smushed by stuff in the car. Disney Bride Katy – who traveled across the pond from England for their wedding at Walt Disney World – shares how her dress travel plans went awry and how she dealt with it. I’m sure a lot of you can relate to her story!

And click here to read all about Katy and Matthew’s Disney wedding, including pictures of The Dress.

Our first real wedding stress came three days before we were due to fly. I had purchased a beautiful dress travel box online, the type of box I had watched lots of girls carry their precious dresses across the Atlantic in. It was brilliant white, adorned with crystals and had a beautiful pink bow tied round the handles. My dress shop had agreed to pack the dress into the box for me and had stored the dress and the box right up until we were due to fly, so there was no chance of my husband to be getting a sneaky glimpse. 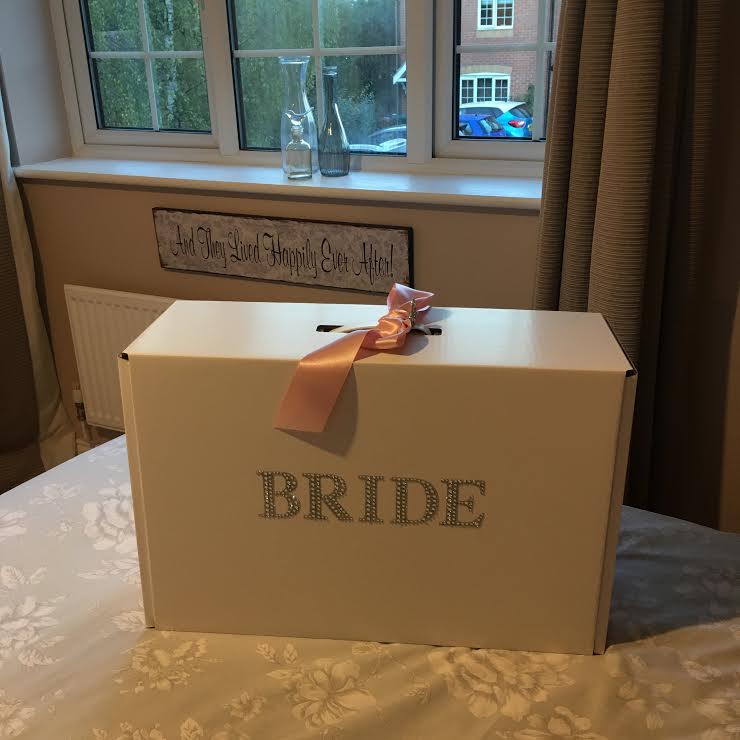 Everything was going well until less than an hour before my sister was due to collect my dress, I got a call. It was the dress shop, and they couldn’t get the dress in the box! I live in Derbyshire, UK – 4,255 miles from Walt Disney World, my chosen wedding destination. To get there required a car journey from home to Manchester International Airport, a 9 hour long haul flight, then Disney’s Magical Express from Orlando International to The Grand Floridian Resort and Spa. How was this going to be possible with a dress that wouldn’t fit into the box?

I had to take the dress all the way to Orlando in a garment bag. My dress store double bagged the dress to protect and disguise it but the dress was huge! The bag was taller and wider than I am, making it difficult to carry. Even more difficult to carry as we also had 3 large cases, 2 small cases, a very large handbag and a suit bag. Despite this I wasn’t trusting anyone with my prised dress. It would not be leaving my side even for a second!

24 guests travelled to Orlando with us, but only 2 travelled on our flight, the best man and his wife. They were life savers and we really couldn’t have done it without the extra pairs of hands. They arrived at our house at 6am on the day of the flight, their arms filled with novelty t-shirts, glasses and mouse ears. We were always taking two cars to the airport, but they had come to ours just in case our luggage wouldn’t fit into one car.

Matthew dropped me, the dress and the rest of our worldly goods at the door of the airport. We waited inside whilst he and his best man parked up the cars and walked back to the terminal. We checked in the majority of our luggage but not the dress. As the dress bag would not fit though airport security scanners it was searched and swabbed at both airports, a nerve-wracking experience when you don’t want anyone to see the top secret dress. Normally after the security checks it is time to relax, but with the giant dress bag, a small carry case and a large handbag it was difficult to navigate through the shops, so we took a seat in a restaurant and waited for our plane to arrive. 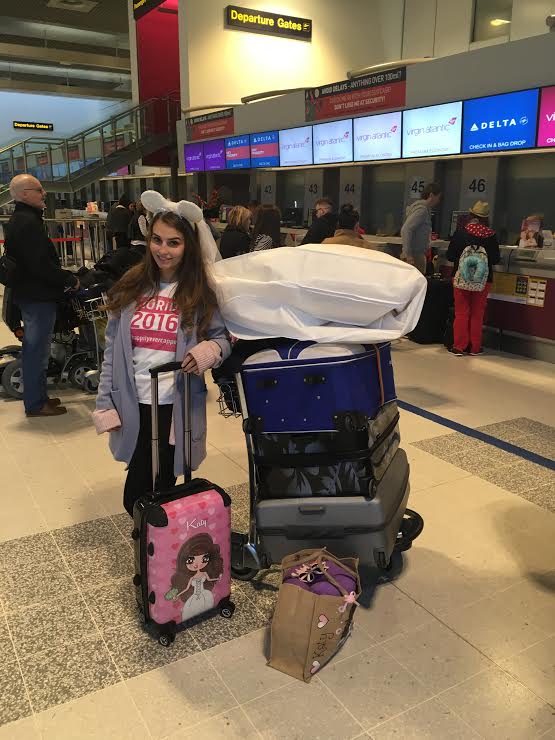 We were sat upstairs, in the bubble of the plane so we were amongst the first to board. The kind Virgin Atlantic cabin crew hung the dress in the aeroplane wardrobe so I could relax for the flight. The cabin crew also stored the suits, the cake topper and my custom made ceramic hair accessories in the wardrobe so I can’t thank them enough. We had so much stuff in the wardrobe that it was jokingly referred to as Katy’s Wardrobe. The crew also brought us all a glass of champagne before take-off as we were celebrating.

On landing my relief at getting all of our belongings off the plane was short-lived. I have never flown into MCO before (I have always flown into Sanford), and navigating the monorail with all of our cases was not going to be an option. We had to re-check our bags and collect at the other side of the airport. Again my dress didn’t leave my side but I couldn’t help thinking that the re-checking of the baggage was just another opportunity for something to get lost in transit. 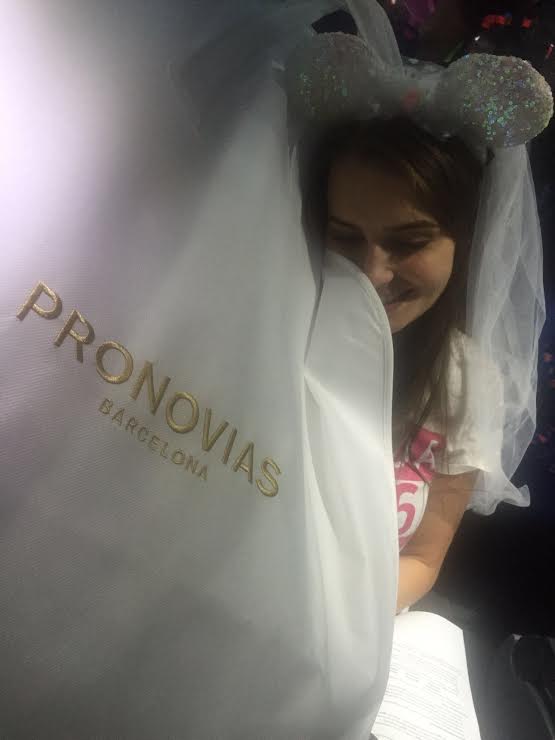 When I was finally reunited with my belongings I travelled from the airport to the hotel by Disney’s Magical Express bus and I was assisted by my best friend. The groom and his best man had hired sports cars, not fit for the purpose of transporting the dress and luggage from the airport but his only request for the whole wedding so I felt it too harsh to veto them. The Magical Express was fabulous, the driver loaded my many cases on and off the coach and the bell staff at The Grand took my belongings – minus the dress which still wasn’t leaving my side – straight to the room. The express had beaten the boys to Disney leaving me and my friend alone in the lobby of The Grand with the dress and bride ears. We got a lot of congratulations as people had assumed we were marrying each other; we just went along with it and thanked people for their kind words.

It was a huge relief to arrive and have the dress, the flowers and the suits at the hotel. And as a nice surprise, my sister, who had obviously anticipated this stress, had arranged for an in-room celebration when we arrived.

Despite all the challenges of the journey there was nothing that would have persuaded me to put my dress in the hold or to have got married anywhere else! 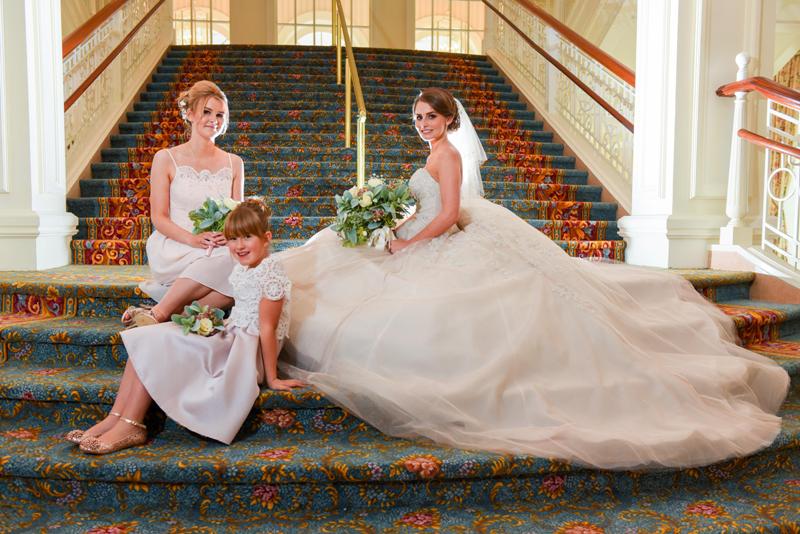