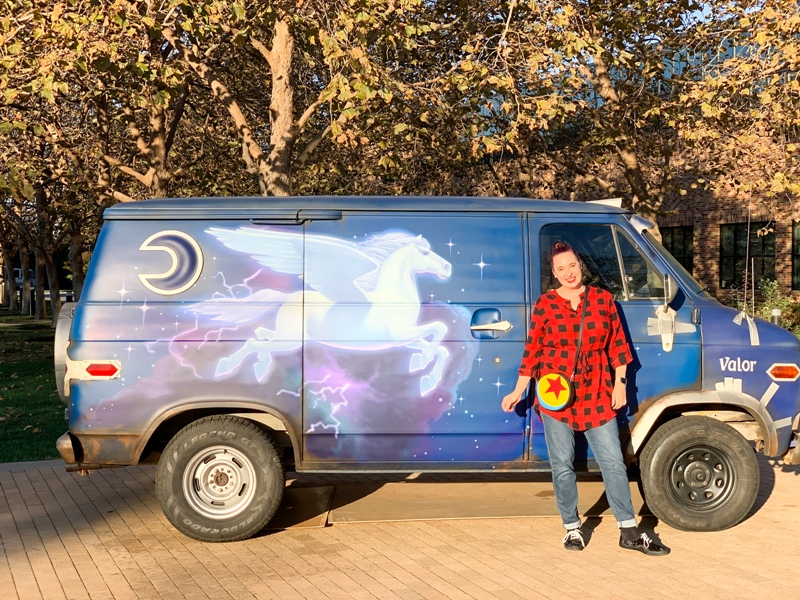 This past October I was invited by Disney to visit the Pixar Studios to learn about their upcoming movie, Onward!

Onward is the story of two elf brothers, Ian and Barley, who embark on a magical quest to meet their father who passed away when they were little. We learned so much about how this movie was made, and the love and care and hard work that goes into every Pixar film. It was truly astounding! You can read all about my trip and details about the making on Onward here.

Today I’m happy to share 5 fantastical facts about Pixar’s Onward with you all! No spoilers here, so you can enjoy these fun movie-making tidbits before you see the film!

1. Onward is based on a true story (kinda)

Director Dan Scanlon has a personal connection to the story. Scanlon lost his father while he was very young, and Dan doesn’t have many memories of him. “The story is inspired by my own relationship with my brother and our connection with our dad who passed away when I was about a year old. That was the jumping-off point. We’ve all lost someone, and if we could spend one more day with them — what an exciting opportunity that would be.” Setting the movie in a world of magic gave filmmakers the opportunity to explore this story!

As you can imagine, this film will be an emotional journey, especially for those who are still hurting from the loss of a father figure. Be prepared for this one to tug on your heartstrings!

Writers use storyboards to show how the film will progress. Most of those storyboards are thrown out as the creators of the film figure out how the story progresses. One of the toughest scenes for the filmmakers to develop was Ian’s introduction in the film. “With a character’s introduction, particularly the protagonist, you can’t shortchange anything. It’s your real chance to prove to the audience why they should care,” said story lead Madeline Sharafian.

3. Onward took six years to create, from start to finish

I don’t think the typical movie goer understands the level of complexity that goes into making these animated feature films! I sure didn’t fully understand it until I spent the day at Pixar, hearing from the film’s creators. From idea conception to final effects, it took over six years to create the Onward. Head of Story Kelsey Mann has been working on the film since day one – September 17, 2013. Mann says that most of that time is spent crafting the story. “We have such a high bar at Pixar. We want to make sure the story is not just good, but great. It takes a long time to achieve that, so we work on the story for many, many years. We don’t actually start making it until the last year and a half.”

4. Pixar created a consulting team of fantasy fanatics to help with the story

As the story team was creating the new fantasy world of New Mushroomton for the film, they wanted to make sure their world and story would connect with people who loved the fantasy genre. To do this, they created “The Fellowship” – a group of Pixar team members who lived and breathed the fantasy lifestyle. The group consisted of fans of Harry Potter, Lord of the Rings, cosplay, video games, role playing games, and anime. The Fellowship was consulted for their insight into the world of fantasy to help inspire and shape the unique world of New Mushroomton and the game Quests of Yore. They especially helped with creating the spells you’ll hear frequently in the film!

5. The team used virtual reality to connect with their characters

The filmmakers relied heavily on virtual reality tools to make sure they could convey the proper emotions and feelings for some aspects of the movie. For example, there’s a scene called “trust bridge,” where Ian and Barley must perform a spell that lets them cross a wide canyon using an invisible bridge.

I personally got to experience the VR for the trust bridge, and let me tell you … it was TERRIFYING. I knew, rationally, that I was walking on flat land. But wearing the VR mask, the canyon looked so REAL. Taking a step “off” the edge, my hands were sweating and my stomach had butterflies. I even let out a big yelp, followed by tons of laughter. I could hear all the Pixar team members telling me I was fine but it does seem so real and scary. But you may be happy to know, I made it all away across the invisible bridge to the other side. I wish I had pictures of me wearing the mask; I’m sure it was quite a sight!