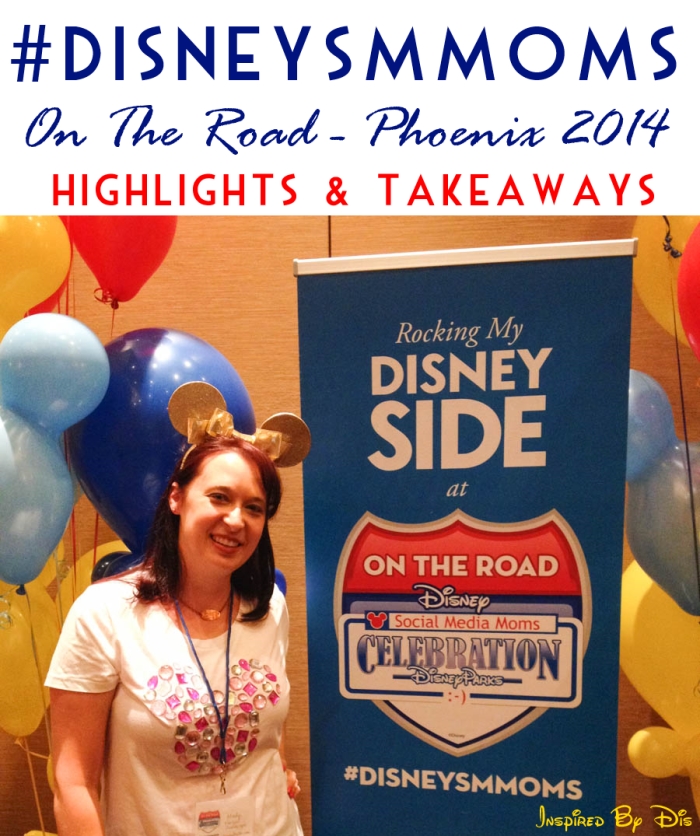 On Wednesday I attended the Disney Social Media Moms On the Road event in Phoenix! I wasn’t sure what to expect and I wasn’t even sure this type of event was for me since I’m not a mom. But all my concerns were shuttered as soon as I arrived at the event hotel and met a lot of the wonderful attendees. These are my people!!!!! It’s great to go to a conference and automatically know you have one big thing in common – our love of Disney! 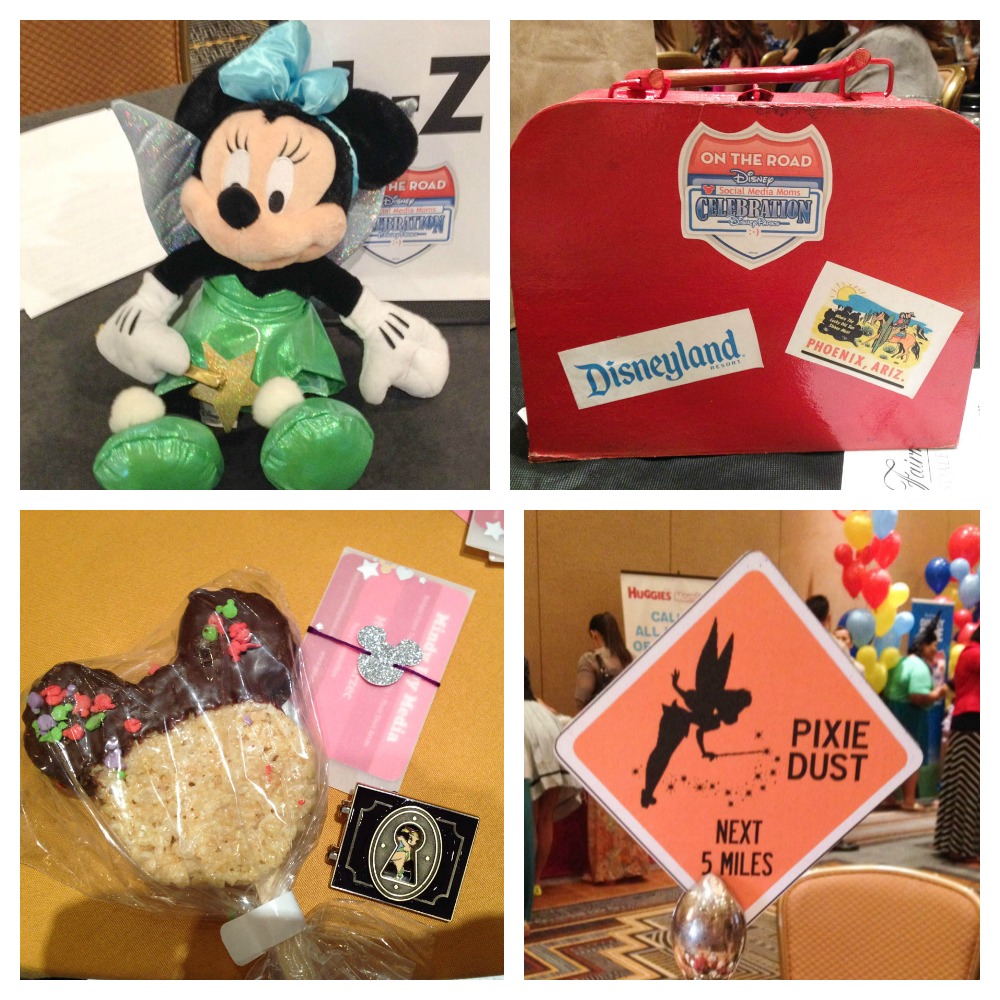 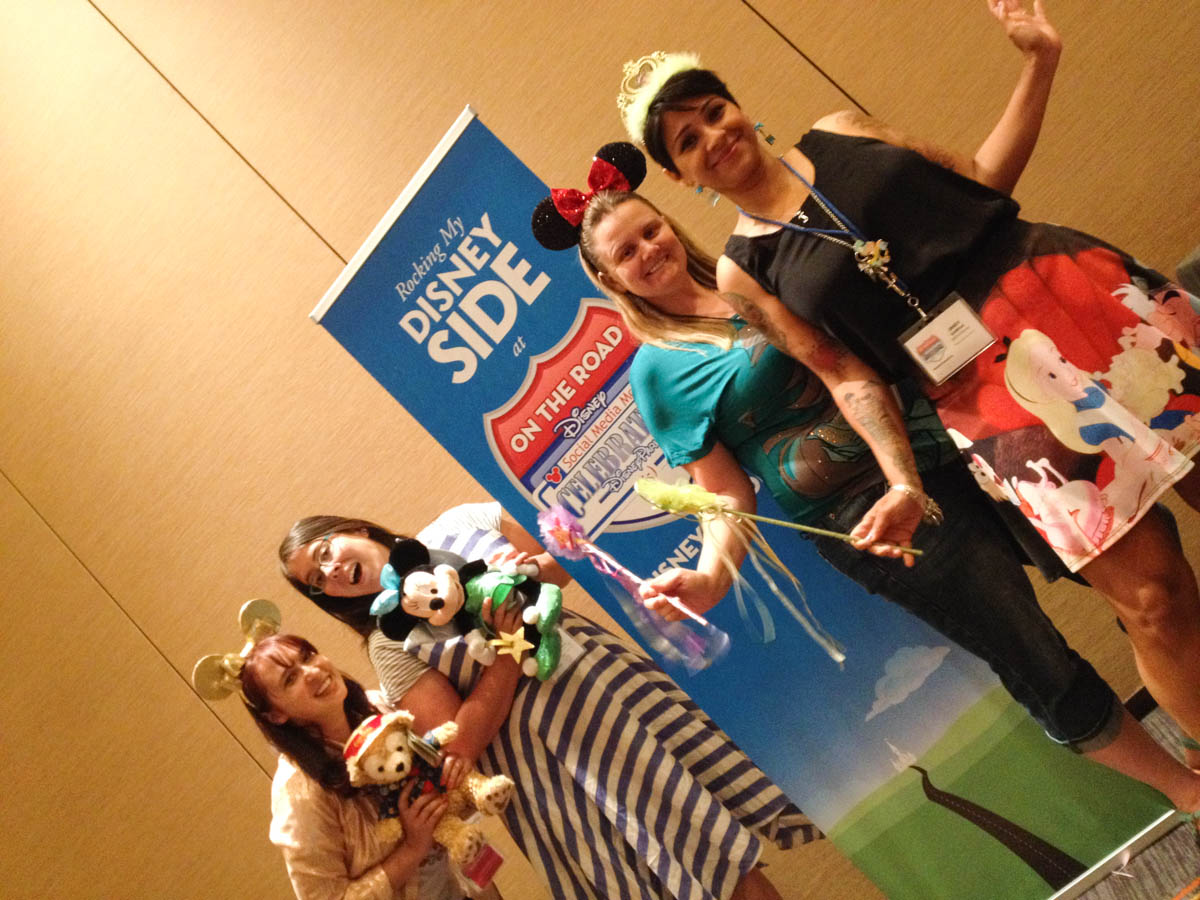 Me with my amazing roommates – Carly Morgan from Magical Day Weddings, Erin Miller from Horsing Around L.A., and Jindy from Flowers Croon. Photo by Patty Holliday from No Guilt Life (using some photography techniques we learned from Tracey Clark – see below)

The day started bright and early at 8:00am with breakfast and a pep talk from Michele Himmelberg, Disneyland’s Public Relations Director, about what’s new at Disney parks. We got a special scoop for Disneyland fans – watch the Twitter @Disneyland account at 10am pacific on 7/17 for a special announcement about Disneyland’s 60th Anniversary next year.

We also did some pin trading! We each were given a random Disney pin and had two minutes to make trades. My pin was actually super cool – a hinged door with Tink behind the keyhole. I decided I would only trade it for something super special. I didn’t see anything I liked better than my Tink pin, so I kept it! 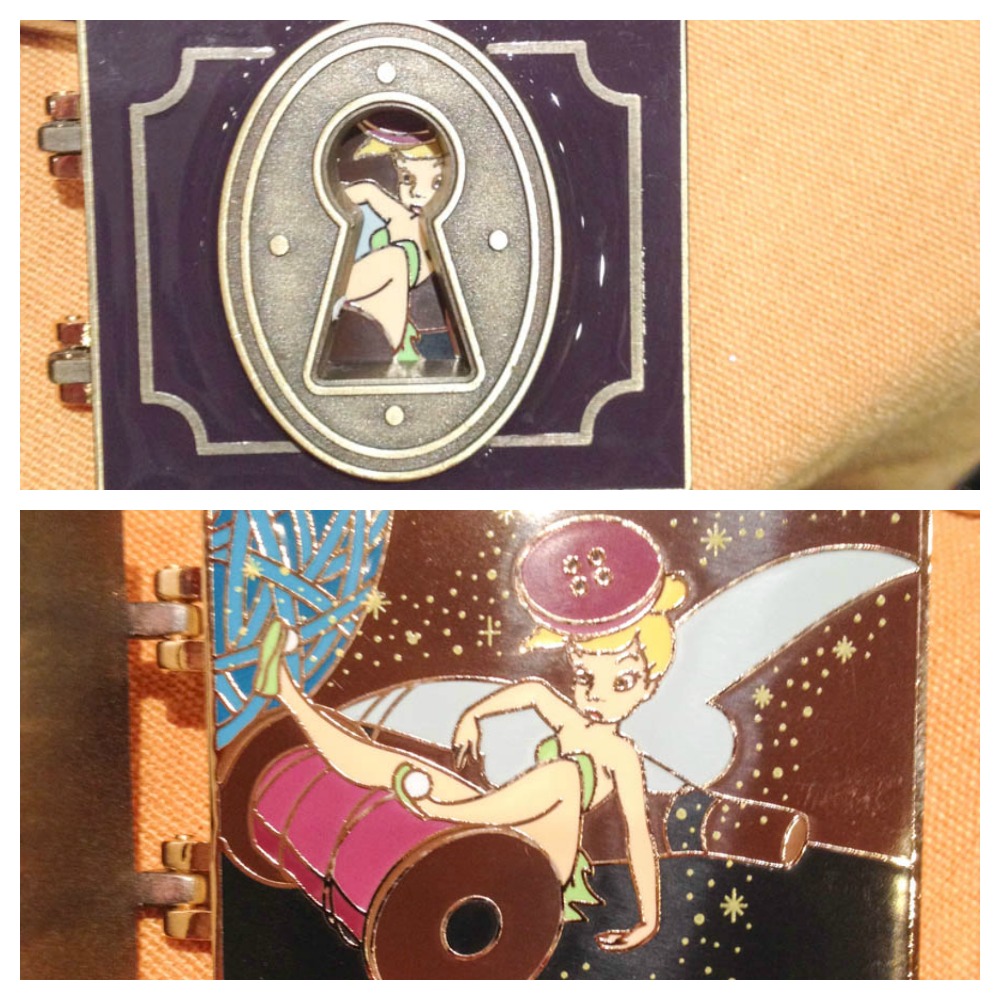 Next we heard from Erin Glover, Social Media Director for Disneyland Resort and my favorite Disney Parks blogger, who talked about content creation on the Disney parks blog. She shared that 10% of their time is actual content posting and the other 90% is planning, gathering info, publishing, sharing, and measuring analytics. So you see a lot of thought and time goes into what you see on blogs. It’s not as easy as just writing something and hitting “Publish!” 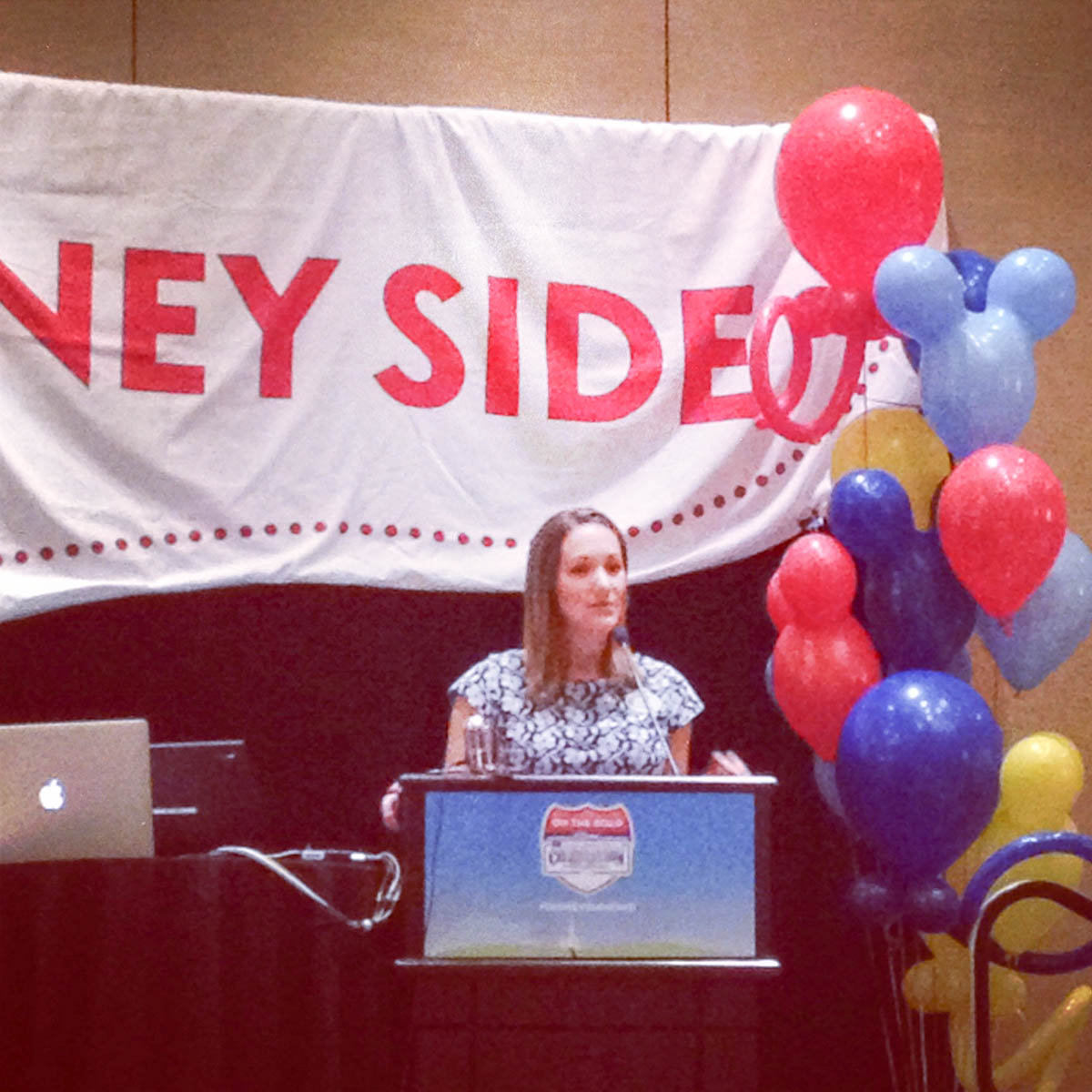 Erin also talked about having to be quick on your feet because some things don’t go as planned, like when they worked with Grumpy Cat to film her Disney Side video.

Erin and her team had a whole premise planned but quickly learned when working with an animal, you definitely have to work around THEM! When their first efforts didn’t work, they quickly had to re-write the script based on existing footage and then try to capture a few more scenes to fit their vision. The video has been viewed nearly 2 million times so I’d say the hard work paid off. Erin said that what you can’t see on the video is about a dozen people just off camera, watching over Grumpy Cat to make sure she was always safe. Awww. 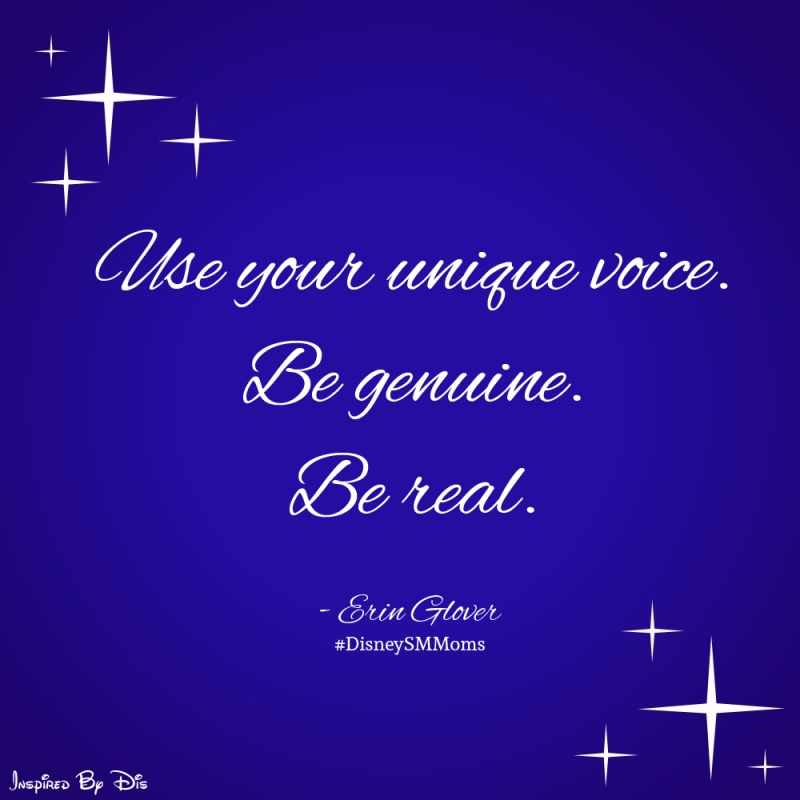 Next up we heard from Lori Lorenz from HP. Lori spoke about some really cool features available with HP products, such as Two Smiles, where you can print a card plus a gift certificate all in one! How stinkin’ convenient is that?! They also have a wireless printer that connects directly to the internet and can print several items including coloring pages and recipes without needing to be connected to a computer. You can even sign up for the HP Instant Ink service. When the printer senses any of your ink cartridges are running low, they will ship you a new one! 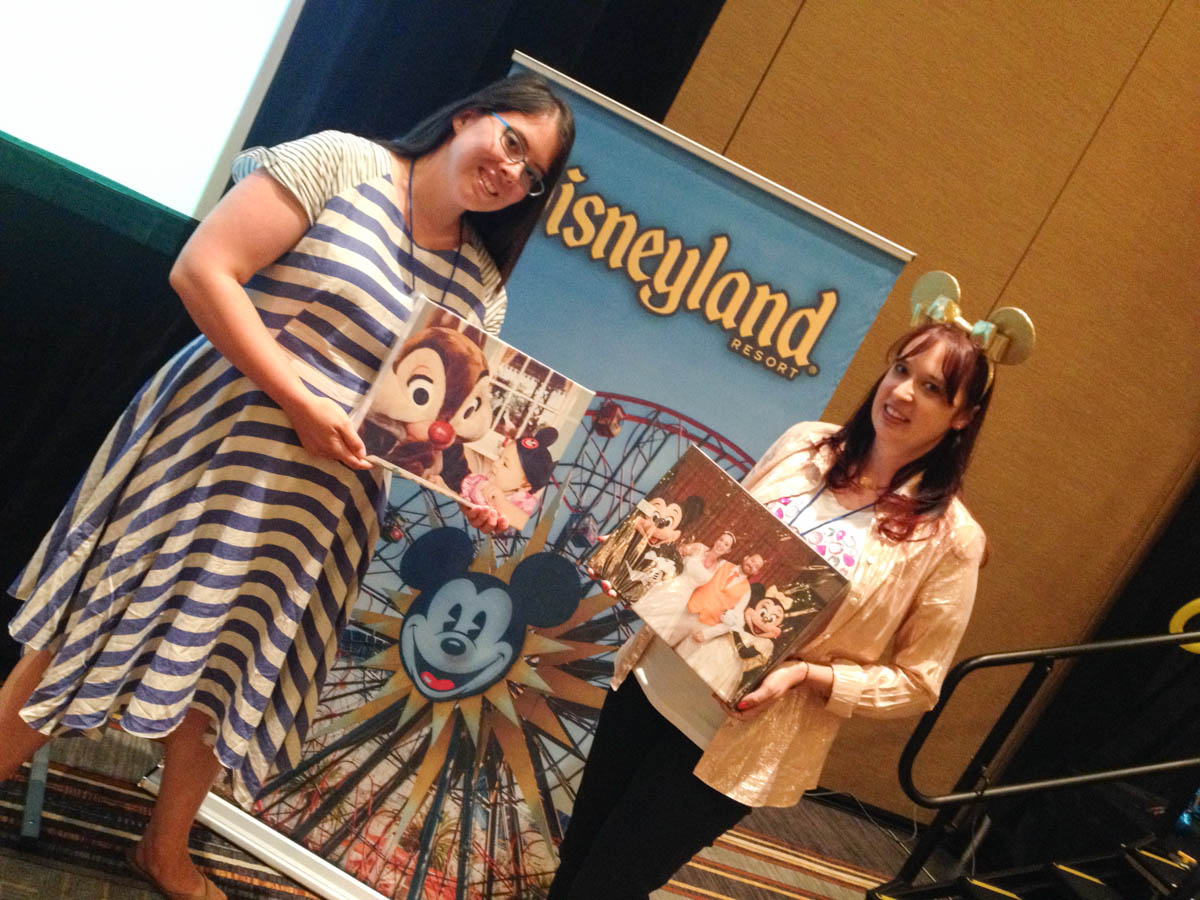 Carly and I both were gifted nice printed canvases with our “Disney Side” photos. 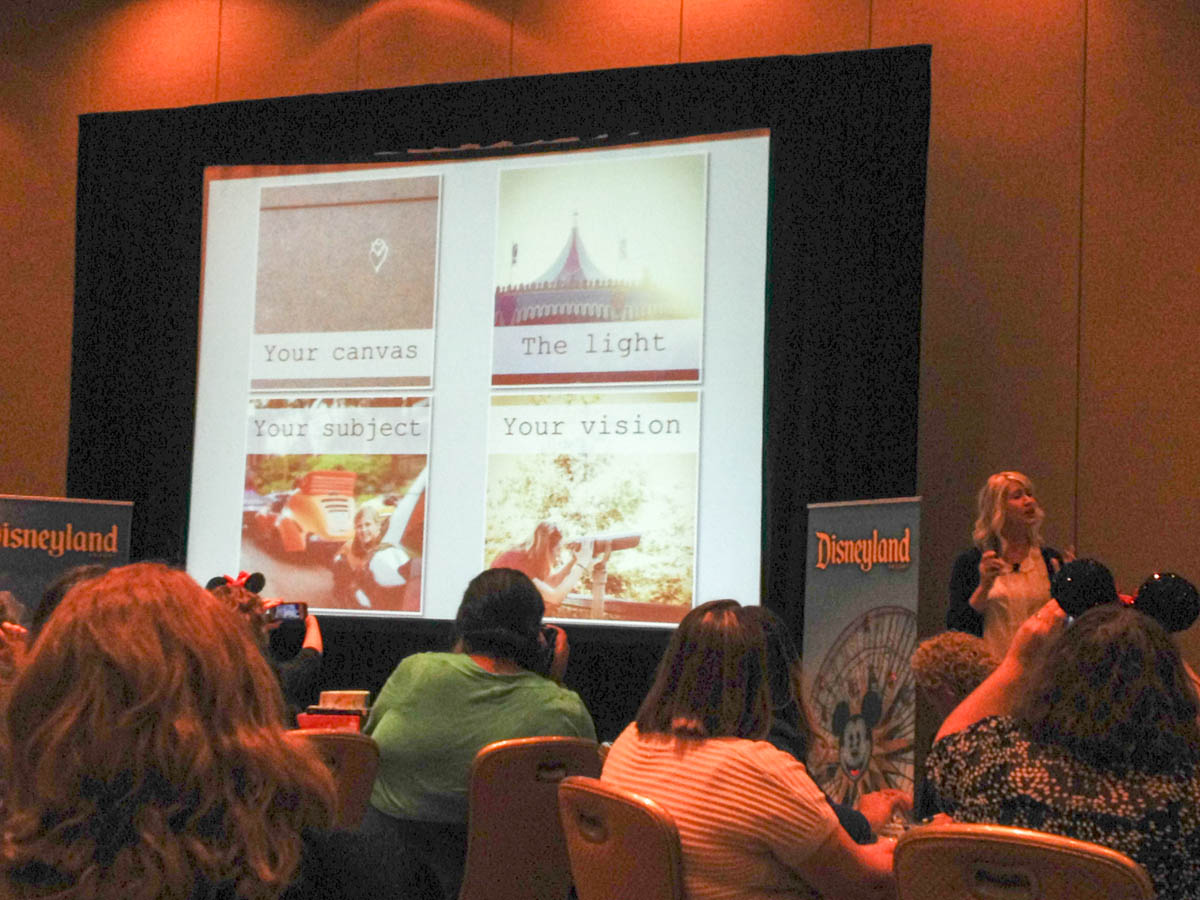 After a quick break we heard from Tracey Clark, an expert photographer and 1/3 of the famous Disney Sisters, about how to take amazing photos with our phones! Even though I just saw Tracey speak at the Alt on Topic on photography last month, I still learned a ton of new things and I loved that all of her photo examples were taken at Disney parks. I want to do a whole post on her photography tips because there was so much, and I want to use my own Disneyland photos as examples. That may take a while to compile so I’ll have to save that for another day! But here’s one tip that really sums up the whole presentation: “Find magic in the mundane.” 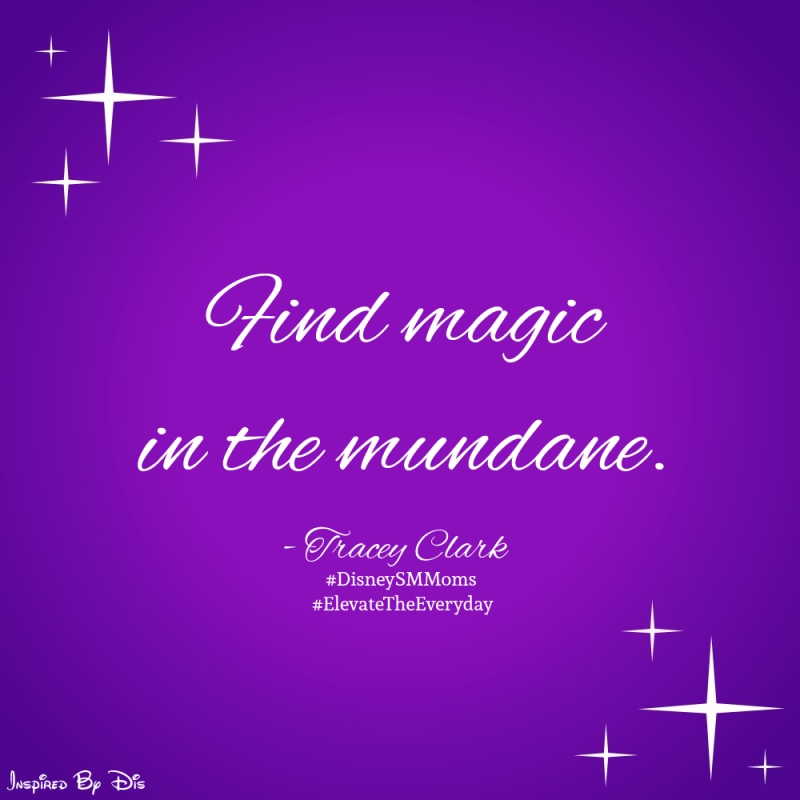 Next we heard from a panel of entrepreneurs: Lisa Cash Hanson, inventor of Snugg Wugg, Romy Taorima, inventor of Psi Bands, and Allyson Phillips, inventor of Tilty Cup. All three were recipients of the HUGGIES MomInspired business grant, which helped them launch their products. They spoke about developing their ideas and the hard work behind bringing them to life. But they all agreed they loved working and making money for themselves, instead of someone else. Even though I haven’t created a physical product to sell, as a newly self employed business woman I can totally relate. Why work so hard to make someone else rich? I felt really inspired by these women and now I’m always on the lookout for the next big idea. 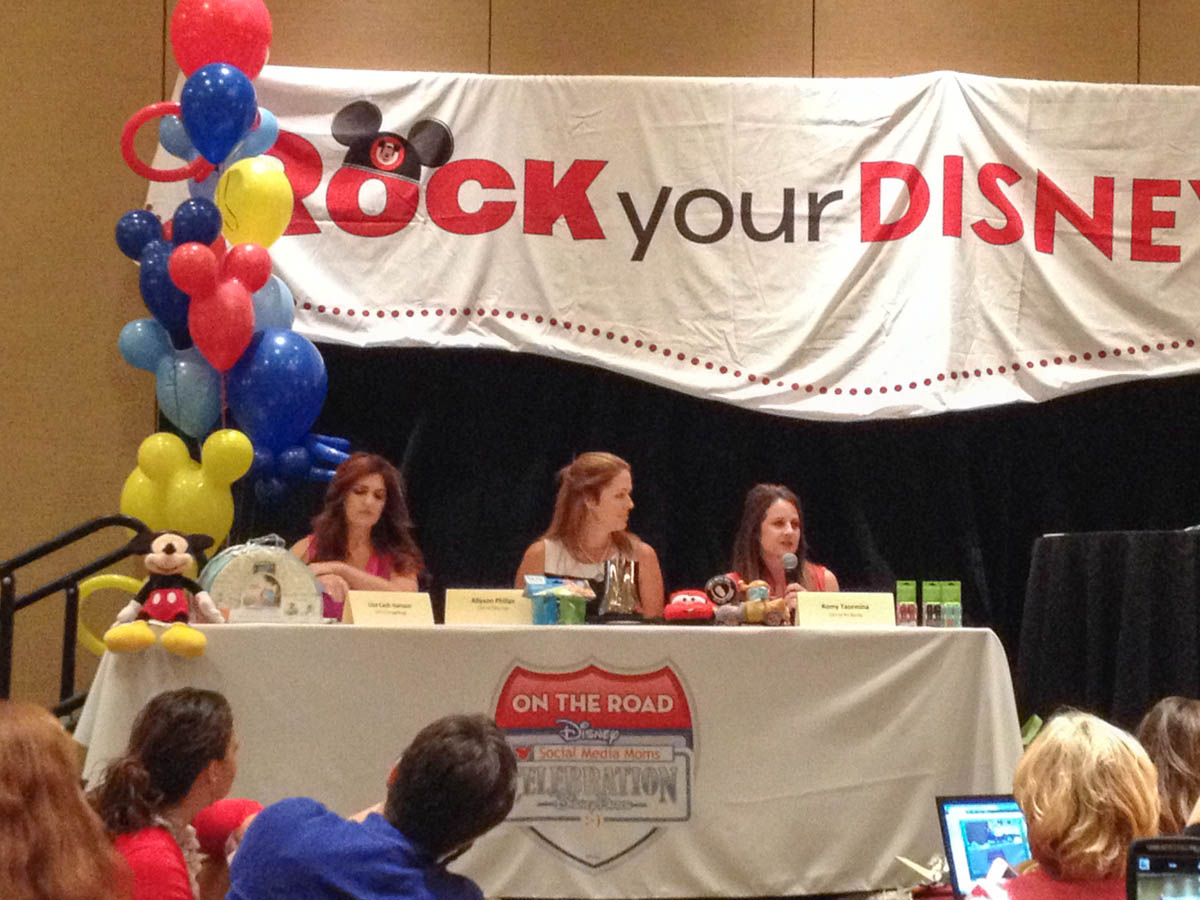 Our keynote speaker was Nadine Bubeck, who started her career as a news journalist and is now a blogger and author. She told us the journey of her career and gave us several tips for becoming successful as an entrepreneur, such as use your name in your brand so people remember you (happy to hear, since I already do that!) and to never burn bridges because you never know where your next opportunity will come from. Hearing from Nadine was a great way to wrap up the conference.

But we had one final surprise! We had been teased all morning about a special guest. The other two cities had Mickey Mouse himself as their special guest, so we were all waiting for Mickey …. but instead we were introduced to Grumpy Cat! As Erin touched on earlier, Grumpy Cat was a big part of the social media campaign for “Show Your Disney Side” so she’s part of the Disney family. We all had a chance to take photos with Ms. Tardar Sauce and I even got to give her some scratches behind the ear. 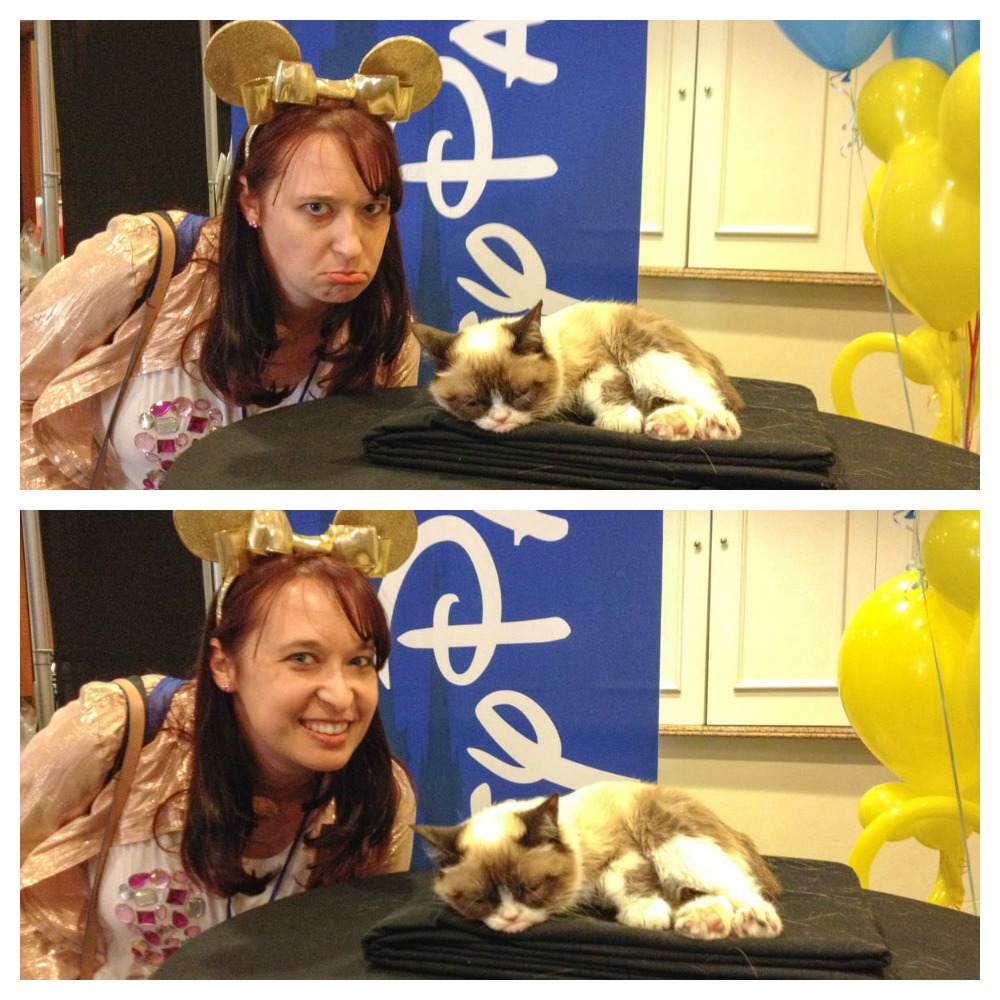 She was very unimpressed with all of us and pretty much slept the entire time, unphased with the commotion and paparazzi. I wish I could have spent more one-on-one time with her. 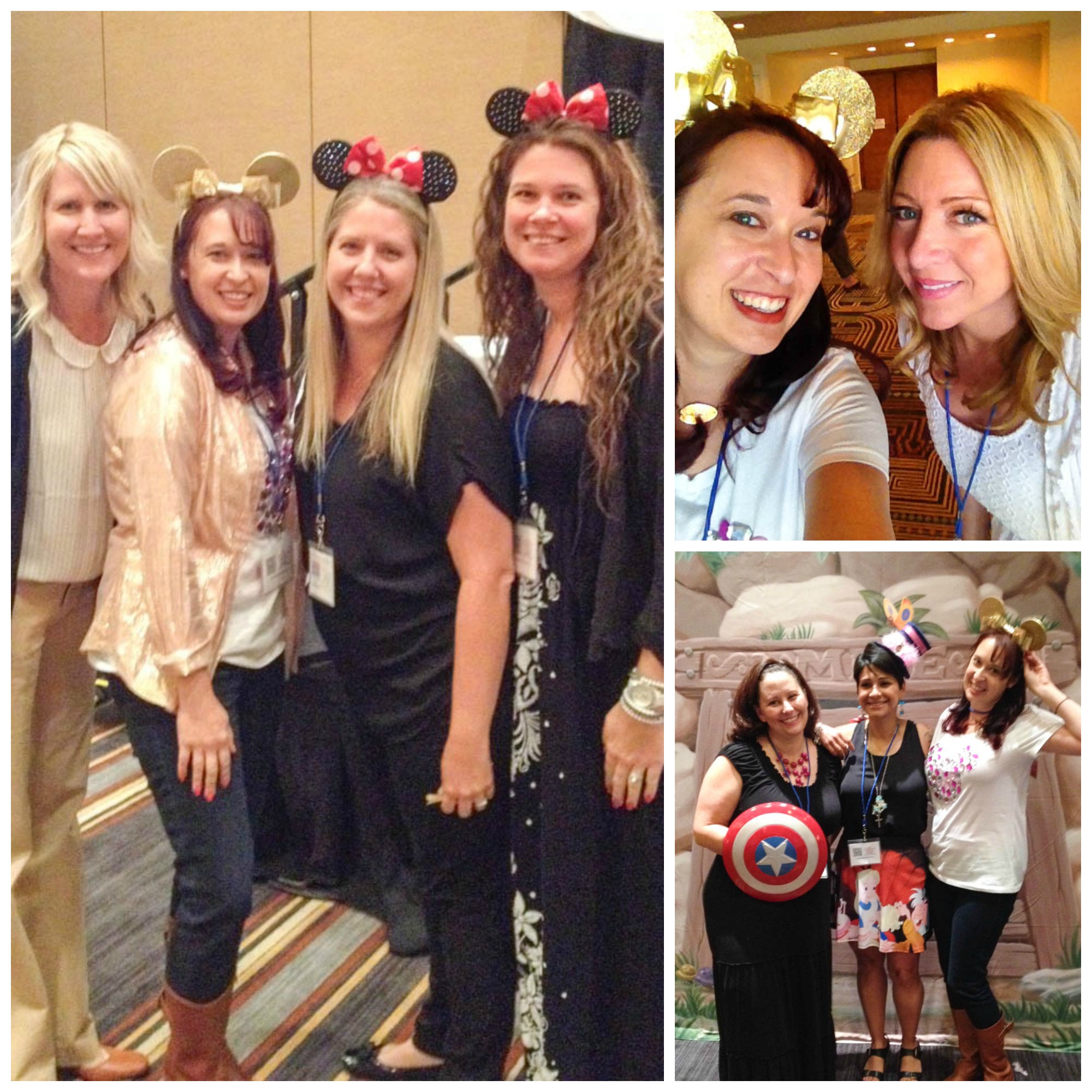 But the best part of any conference is connecting with friends. I got to meet ALL THREE Disney Sisters (such a treat!), take selfies with Wendy at Over the Top Mommy, and goof off in the photo booth with Patty and Jindy. My only regret is not having enough to time to network and take pictures with every single attendee and speaker.

And I have to take a moment and gush over the gorgeous Fairmont Scottsdale Princess resort. What a breathtaking place! Not only were the grounds gorgeous, but the service was top notch. We lucked out and our room was right next to the conference area and adjacent to the pool and restaurant area. I would definitely love to stay here again (but maybe in the winter next time)! 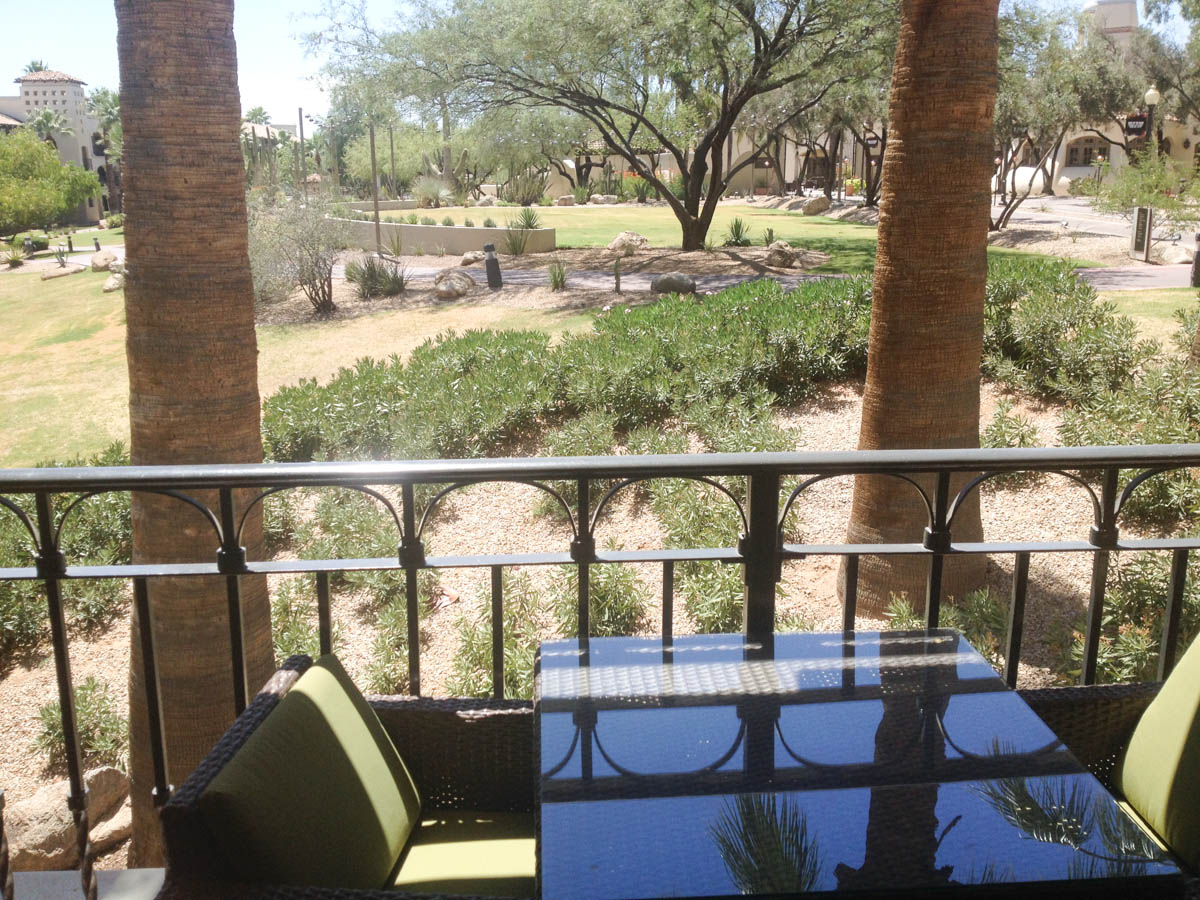 View from our private balcony! 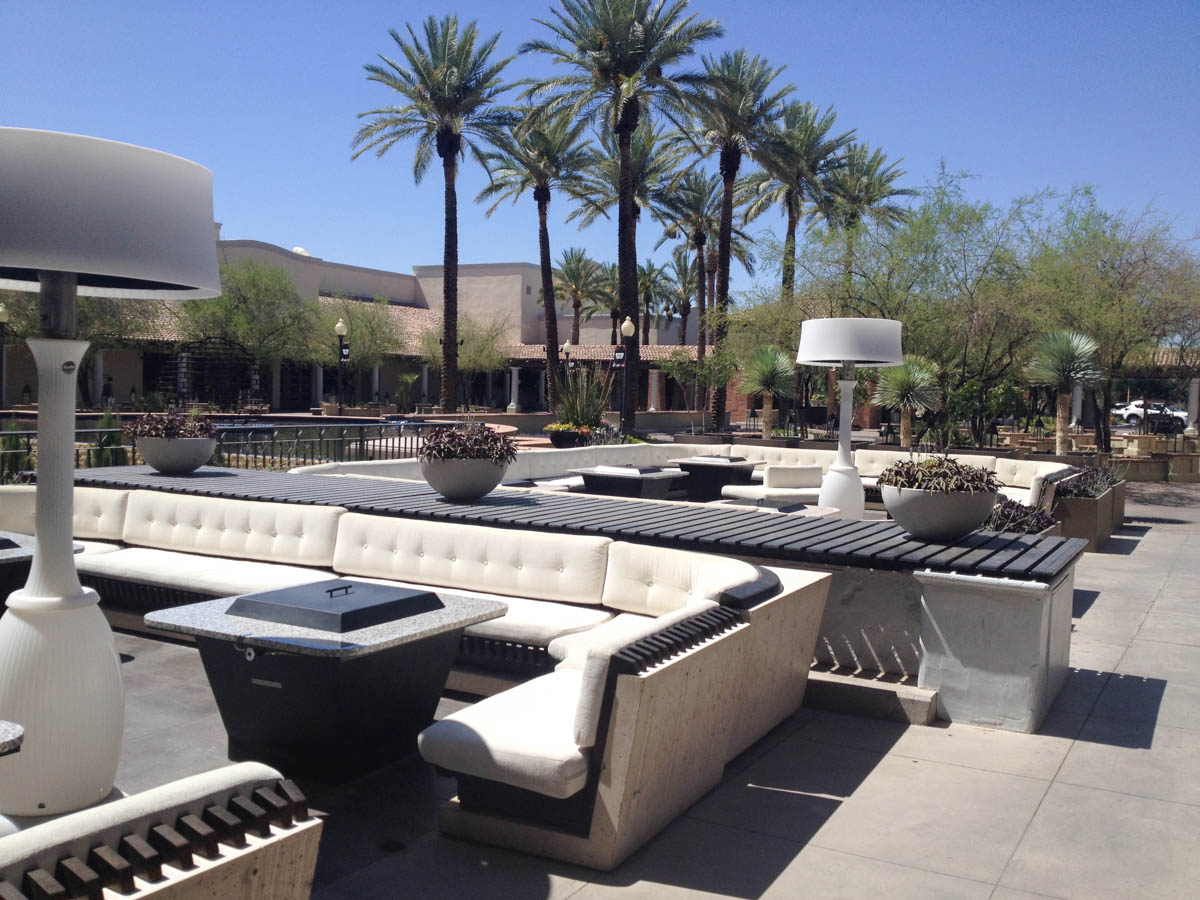 The bar and lounge area (this place really came alive at night). 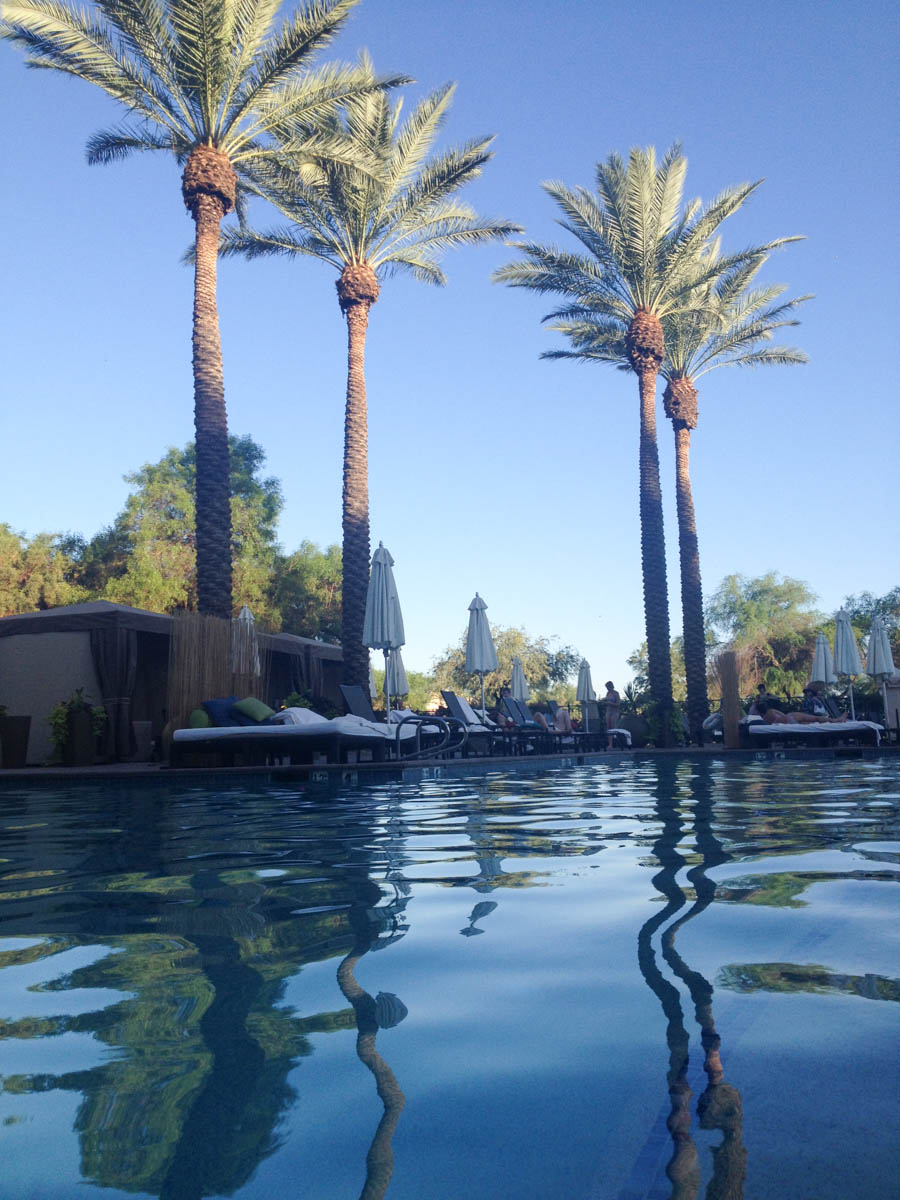 Taking a swim after the conference. 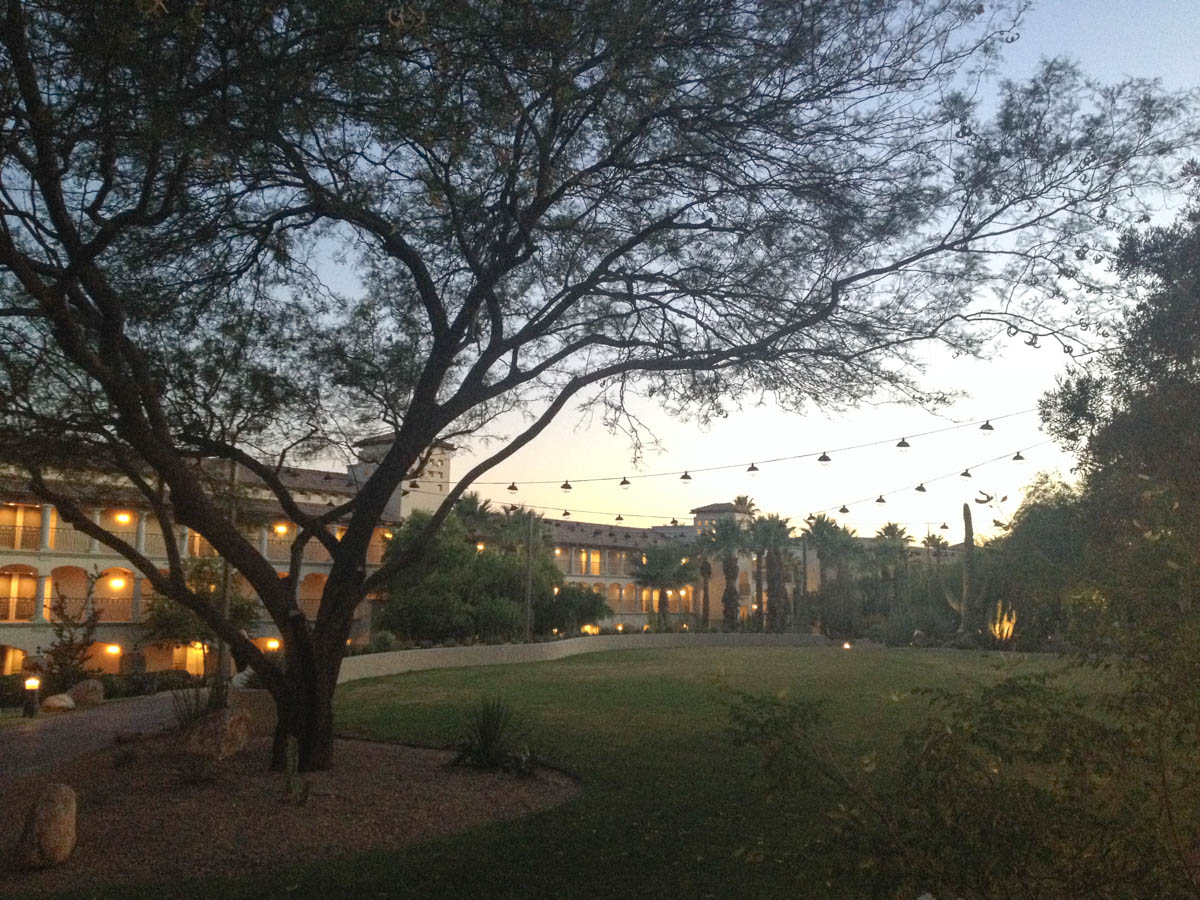 Dusk falling on the resort.

I feel incredibly lucky I got to experience this conference and learn so much from the wonderful speakers. I say it all the time and this event really confirms it – Disney people are the best people! 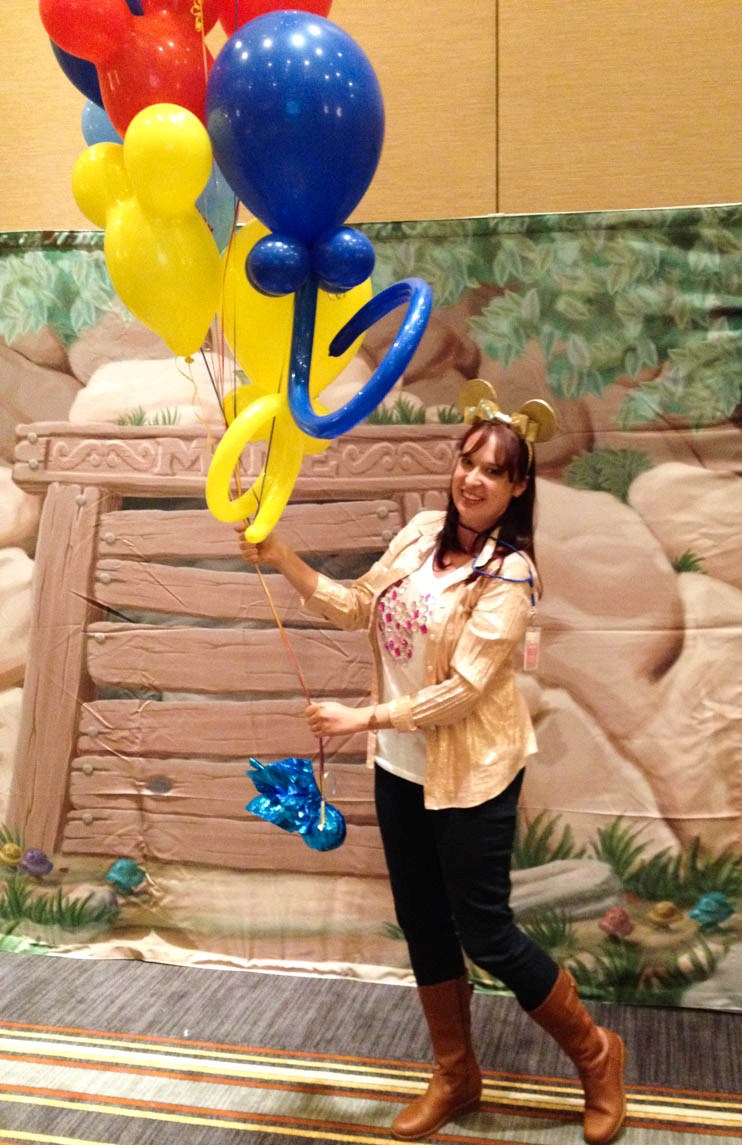 (PS – You can find my Gem Mickey Shirt tutorial here. Tutorial for the Gold Minnie Ears will be up soon.)