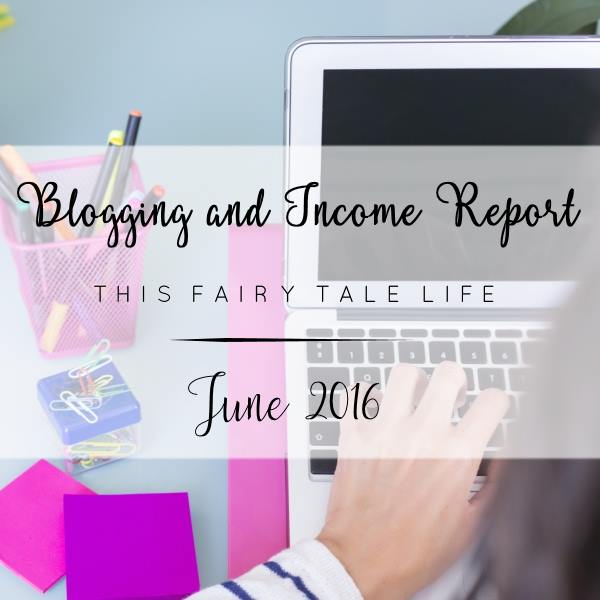 Hello! Welcome to my Blogging and Income Report for June 2016! Wow, the end of the month really snuck up on me! I can’t believe it’s almost August and 2016 is more than halfway over. I had a busy month in July with some personal victories and tragedies, but I’ll talk more about that in the July report. June was a solid month for me, even though I was on vacation for nearly half of it! My amazing readers really stepped up when I put a call out for guest posts and I had more than enough to share while I was vacationing in Hawaii. So THANK YOU so much to all of you, I’m so grateful. I really do have the best friends a blogger could ask for!

Starting with my goals from last month. Since it’s mid-year I’ve been reassessing my goals for 2016 and I actually have been spending small amounts of time here and there trying to get some other things finished. Things that have been on my to-do list for a while now. I’m almost done with one of them and it will be ready to reveal soon, which is exciting!

I didn’t get around to playing with my blog’s main page layout but it’s still something I want to tinker with when I have the time.

Like I said earlier, I had a pretty decent June. My stats dipped a little compared to May but considering I was away for a big chunk of the month, I feel like I maintained pretty well. A 1-3% drop is not bad at all!

I kicked off June in Hawaii and didn’t return home until the 12th, then at the end of June I took off for a couple days in Martha’s Vineyard. Between that, I worked my tail off to get new content out five days a week, only missing a day or two. I didn’t go to Disneyland AT ALL in June. Isn’t that sad?!?

Here’s what I earned in June 2016. I list the earnings by network, and then state the specific brands/shops in parenthesis. If I didn’t make any money through a specific affiliate channel, I will leave it off the list (all those zeros could get depressing)!

So happy to have my second ever four digit month! Look guys, I know I make small potatoes compared to other income reports, but if someone had told me a couple years ago that some day I’d make $1000 on my little website I’d never believe them. So it’s very exciting to me. And hopefully in the future when I have my first or second five-figure month, I’ll still feel humble about it, haha.

Continuing with my big goals for 2016 and seeing what I need to do to get them all done this year. I should also probably spend less time playing Pokemon Go and Disney Emoji Blitz.