Skip to content
This Fairy Tale Life is reader supported. When you buy through links on our site, we may earn a monetary commission. Learn more.
225 Shares
Tweet
Share
Pin225
Share
We have another great “at home” Disney wedding to share with you today!  Bride Bethanee sent me an email telling me she used our Vintage Park Ticket Invitation Tutorial for their wedding, and of course I just had to see pictures!   I love their subtle Walt Disney World theme, using vintage posters as table names, Cast Member name tags as escort cards (!), and of course the aforementioned ticket book invitations.   Lots of cute details to drool over here.  A big THANK YOU and CONGRATS to Bethanee and Benjamin!
Photos by Kitestring Studio unless otherwise noted. 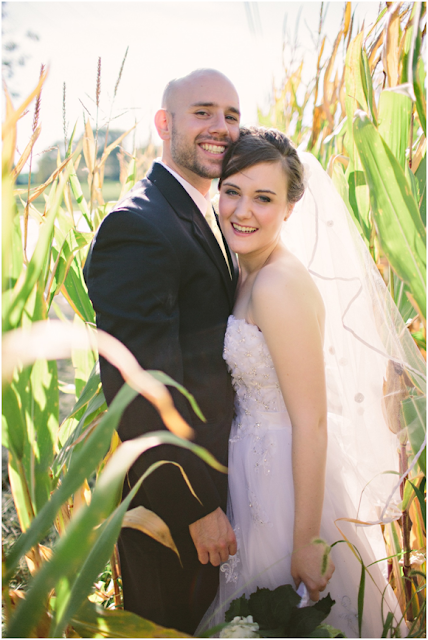 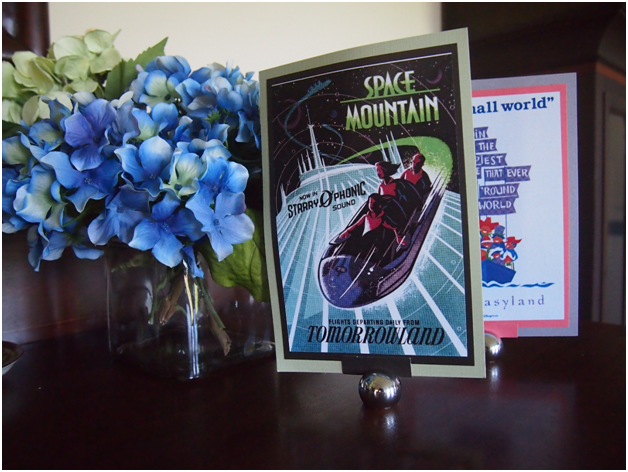 How did your family/friends react to your Disney wedding?  Most people went with the “Well, it’s your wedding…” line. Everyone who knows me knows my love of Disney, so they weren’t surprised, but I doubt they would have chosen it for themselves. It seemed like people didn’t know what to expect. 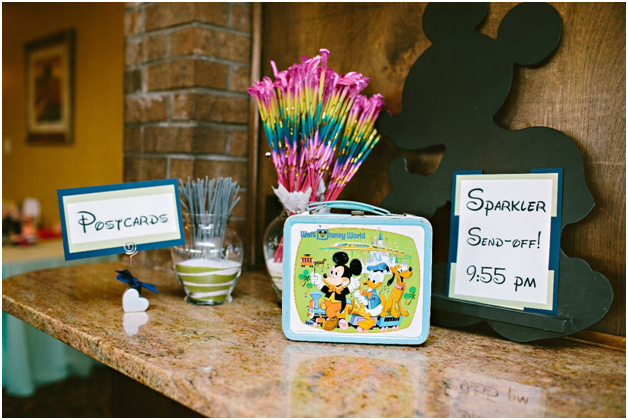 What was your theme?  Vintage Walt Disney World (1970s)

What was your biggest challenge in planning your Disney wedding?  Trying not to let it get too cartoonish and keeping it strictly Walt Disney World. While I love the movies and recent updates to the park, I felt the theme wouldn’t be recognizable if I mixed eras or movies plus the park. 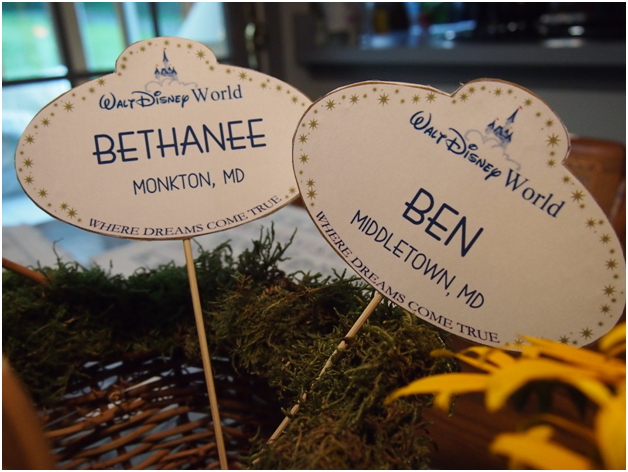 Tell us about your ceremony. Did you include any Disney touches?  I kept Disney out of the ceremony to keep it simple and serious. Though the pastor, knowing my love of Disney, did make a mention of marriage not always being a “Disney fairy tale” or a day in the parks! The only other Disney moment was when our ring bearers went in. They carried banners that read “Here comes the bride!” in Disney script. 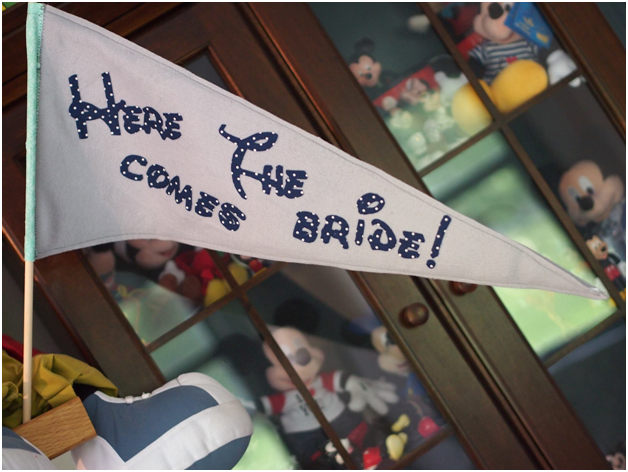 My mom and dad also got into the act with a Mickey necklace and Mickey tie, purchased during a trip to Walt Disney World. 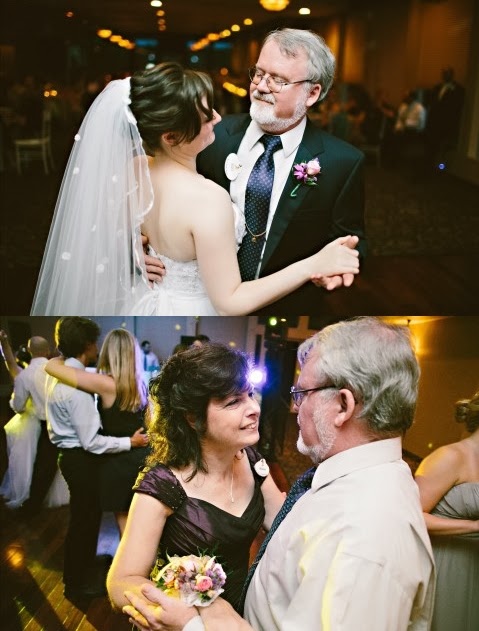 Describe your reception. Was it completely traditional or did you do anything unique?  I would say it was mostly traditional with a few quirks. We made our table “numbers” Disney rides, marked by vintage posters that we printed ourselves and pasted on cardstock.  We added a game table of vintage Walt Disney World cards, games and puzzles for people who didn’t want to dance. I put a bunch of Mickey lollipops in my toss bouquet since I wanted the person who caught it to have something a little more tangible and exciting than a stranger putting a garter on their leg! 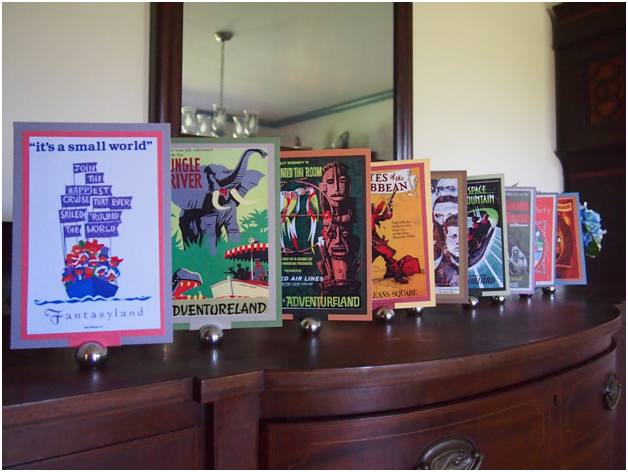 Photo courtesy of Barbara Bemis.
What did you splurge on? Where did you save money?  I splurged on photography, since I consider the memories that the photographs capture the most important part of the wedding. We saved money by doing as much as possible ourselves – the invitations, placecards/nametags, cake topper, and table “numbers” to name a few. 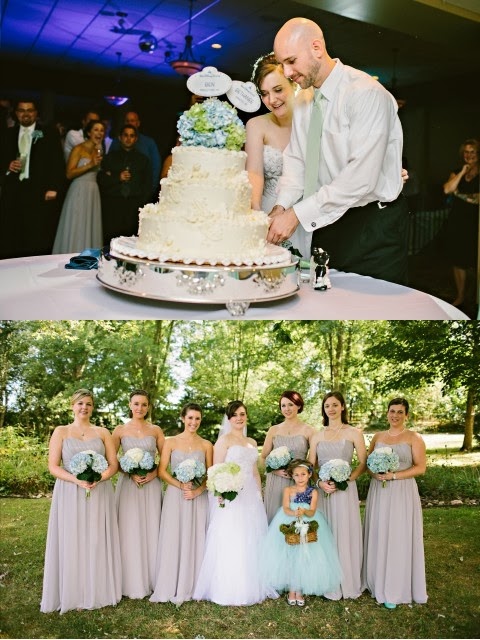 What was your favorite moment of the day?  I loved slow dancing at the reception with almost all of our guests on the dance floor. It felt like such a celebration of relationships – mine with my husband, our guests with us, and our guests with each other. 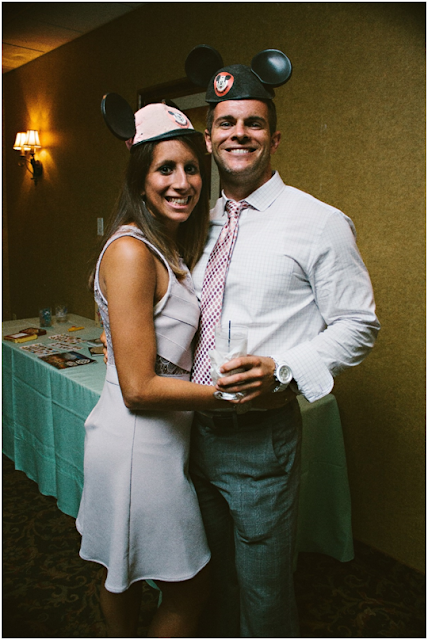 What would you change if you had to do it all over again?  The one snag in the day was that the bus we had booked to take guests from the church to the reception and then to return to the church to take the bridal party to the reception got lost. As a result we were about 15 minutes late to our reception. It wasn’t a big deal in the end, but I would have asked that they do a dry run or at least confirm the directions with me beforehand if I did it again.

What advice would you give to couples that have just started planning their Disney wedding? Ask yourselves, “What is it that makes Disney special for you?”  For me it was the feeling of being in the park, and that was what I tried to bring to my wedding. If you enjoy sitting at home watching the movies, bring that aspect to your wedding. If it’s about the joy you get from the characters, make the characters your main detail. It isn’t about cramming as much Disney swag as possible into the day, but pulling what makes Disney special for YOU out for your guests to experience. 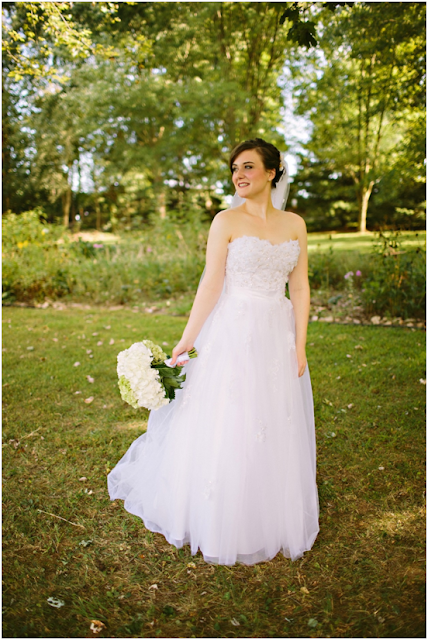 Any other details you want to share?
I am a hardcore Walt Disney World lover, while my husband is a bit … less enthusiastic. I knew I wanted Disney to feature in our reception, but I didn’t want it to be too overwhelming for my husband.  As I’m also an historian, a vintage Walt Disney World theme seemed the perfect choice! Thanks to a crafty mother, many of the Disney touches were DIY. In the end I was quite pleased with how everything turned out, and I think the WDW theme added just the touch of whimsy people needed to feel like they could let loose and enjoy themselves – just like we do when we go to Disney.
INVITATIONS:
We more or less followed the instructions on this blog for vintage ticket book invitations. 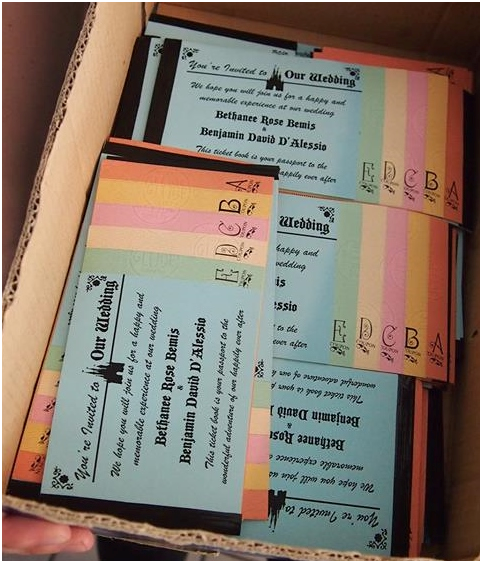 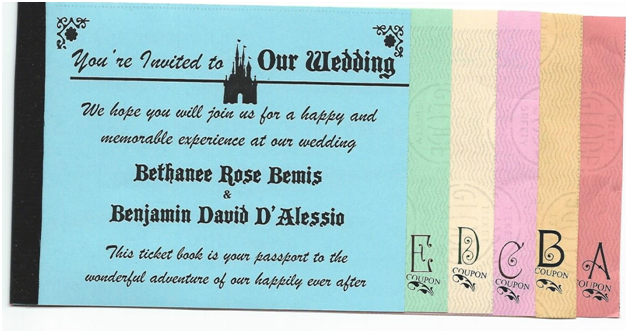 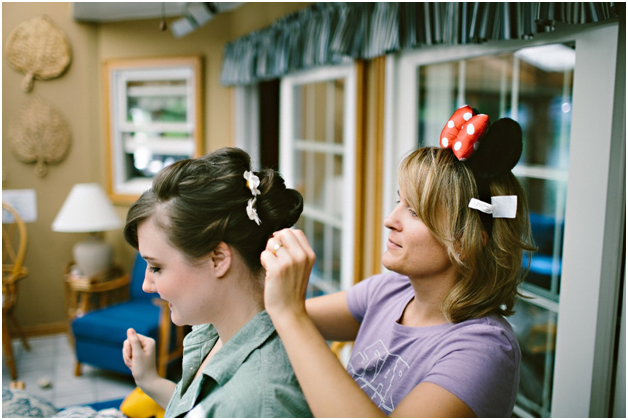 DRESS:
.
My dress was from the Alfred Angelo Disney Bridal collection-the Snow White from a few seasons ago. 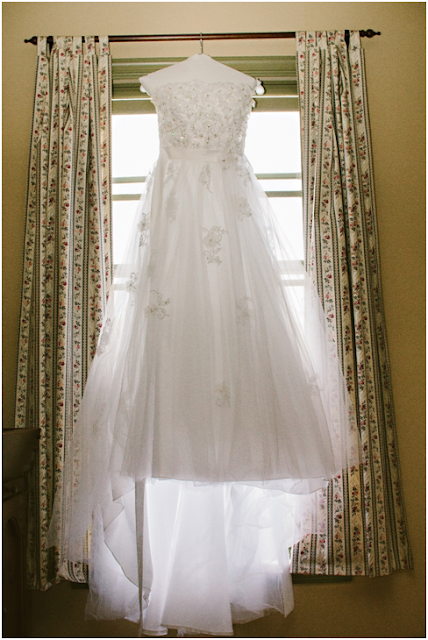 PLACECARDS/FAVORS:
As a combination favor/placecard, we made mock Disney cast member name tags by printing a design on cardstock and gluing it to a plastic nametag purchased in bulk off the internet. The bottom of the nametag gave the “ride” at which table the guest was seated. Almost everyone got in the spirit by putting on their nametags! 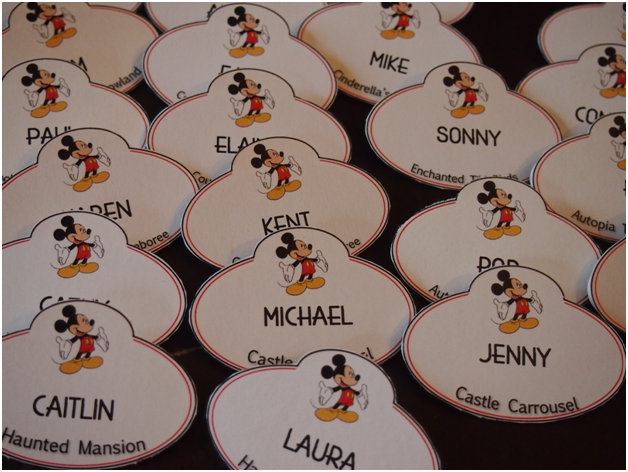 Photo courtesy of Barbara Bemis.
CAKE:
We made our cake toppers by printing on cardstock; the Minnie and Mickey wedding figurines were actually a gift to my parents at their wedding. 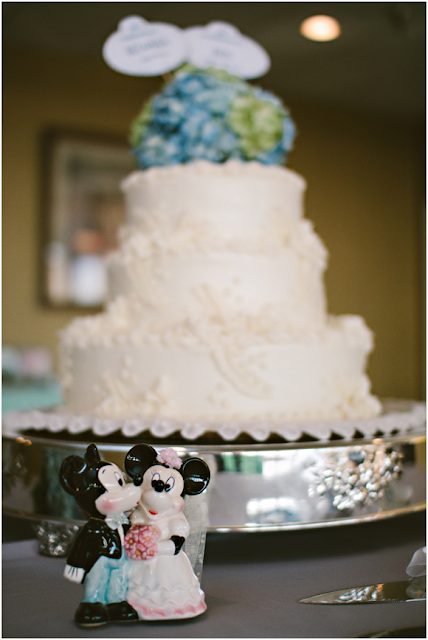 GUEST BOOK:
Instead of a traditional guest book, we bought vintage WDW postcards on Ebay and had people write their well wishes on the back, then drop them in a vintage Disney lunchbox. We used another vintage lunchbox as our cardbox. Later, I put the postcards in a Disney photo album.

EXTRAS:
We printed a vintage looking Mickey and Minnie image on thick paper and wrapped that around mini chocolate bars to be put on the tables at dessert. 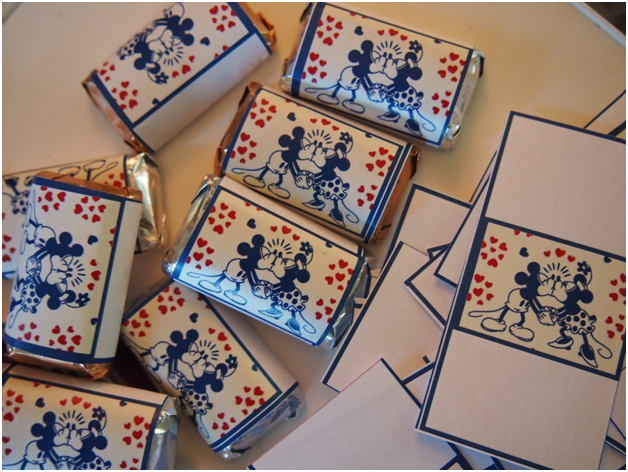 Photo courtesy of Barbara Bemis.
We included a game table for people who didn’t want to dance. It included vintage Disney puzzles, cards, and toys we got from our personal stash plus Ebay. The hats are from my first trip to Disney as a four year old! 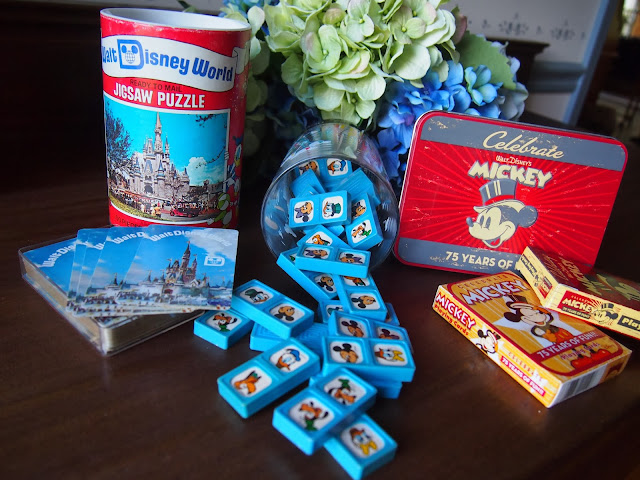 Some guests even brought their own ears when they heard the theme. 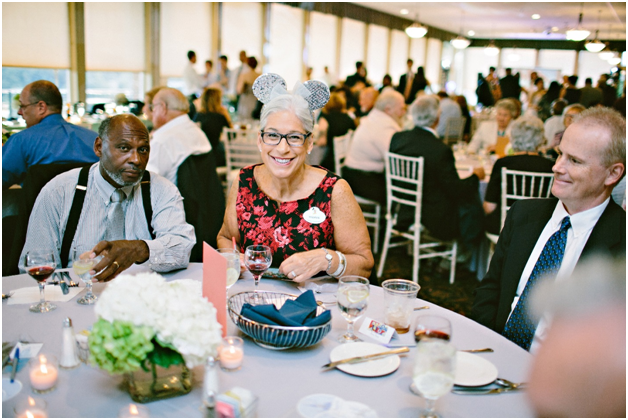 I gave the florist a group of Mickey lollipops from Disney World to put in the toss bouquet. Personally, I’d rather get lollipops than a stranger’s hand up my leg any day! 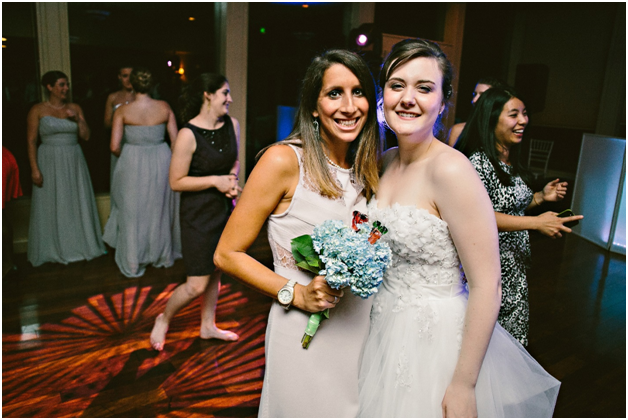 We ended the night with sparklers reminiscent of the fireworks during a night at Disney. 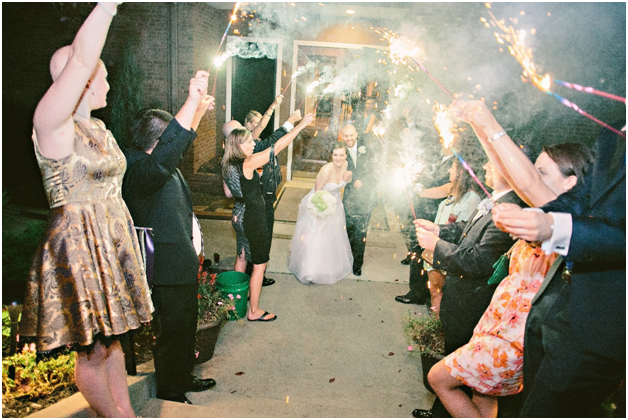 Last but not least – My favorite planning accessory. 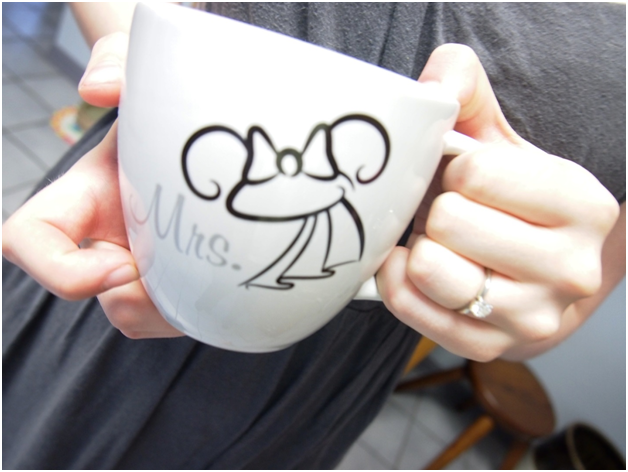