I’m back from Alt Summit and my mind is swimming. So many adventures, so much knowledge, so much to process, and so much swag to sort through. Not to mention the pictures. 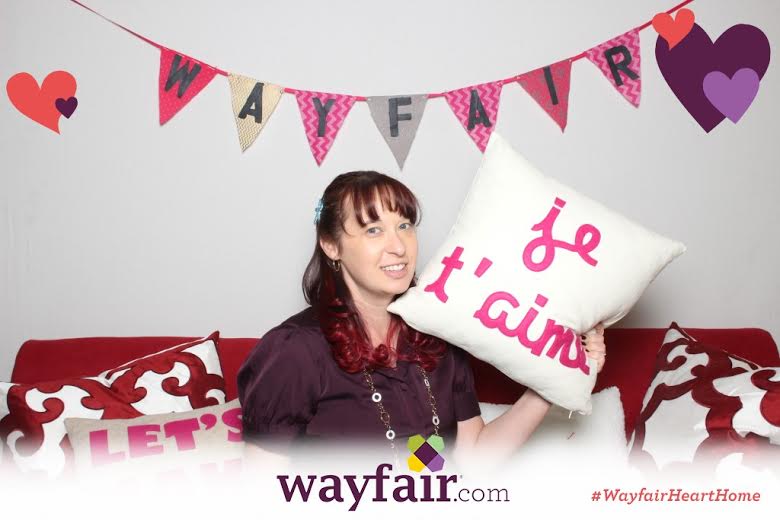 {Someone please buy this poor gal some lip gloss.}

I have a ton of super exciting things to share, but I’d thought I’d start with the cream of the crop. Alt Summit is all about making connections, gaining business knowledge, and becoming inspired to do big things. And that’s exactly what happened to me in crazy, unexpected ways this year. I’m going to start off my Alt recap posts with a list of six crazy things that happened to me at Alt Summit.

1. I was gifted a Cricut machine. THE MOTHERLODE OF SWAG. I mean, really. Talk about shocked and overjoyed. Historically, Alt Summit kicks off on a Wednesday evening with Sponsor Dinners. Each sponsor (brand) of Alt Summit hosts a dinner for around 20 attendees. It’s a perfect way to start the conference because you’re interacting with a small group of attendees, making the next day, when you’re among 700 attendees, less daunting. And it’s a great opportunity to network with the brand representatives in an intimate setting. When Sponsor Dinners were released, I had my eye on Cricut (affiliate link) because I knew they licensed Disney products. I was hoping to speak with the Cricut reps, tell them about my Disney DIY projects on Inspired By Dis, and my ideas for wedding DIY projects on Pixie Dust Bride, and even for projects here on Budget Fairy Tale. I thought maybe there could be some sponsored parthership opportunities but beyond that, I wasn’t sure quite what I was expecting.  Needless to say, I was never in a million years expecting Cricut to announce they were gifting all of us one of their new Cricut Explore machines and a one year membership to their download catalog! I’m not afraid to admit a few tears were shed, by myself and some fellow attendees. Yes, we sure do love our crafts. 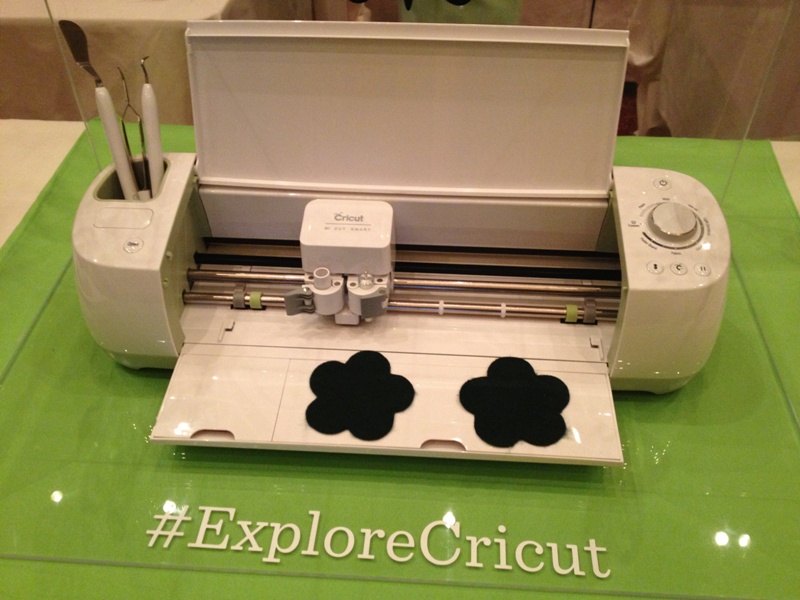 2. I was given Disney blogging advice and the best compliment ever from Rachel of Handmade Charlotte. This also happened at the Cricut dinner. The dinner was co-hosted and decorated by the super talented Rachel, who blogs at Handmade Charlotte. I happened to be sitting across from her at the dinner and we struck up a conversation, and naturally it let to my Disney blogs and my love of Disney. Well, I had no idea that Rachel was one of the “Social Media All-Stars” invited to help kick off the Disney Side campaign at Disneyland, and she has worked directly with Disney regarding blogging and social media. Like, whoa. She noticed I was DisneyBounding as Minnie and proceeded to tell me I’m exactly the type of blogger Disney should be looking for. Like, whoa. Her encouragement and advice was hands down the best part of the conference for me. In short, she convinced me that if I really want to achieve this dream of working with, or create a career writing about, Disney, I need to focus all my energy on that goal. I’m thinking I may, at some point, look back on this and realize it was a life altering moment. But more on this later. 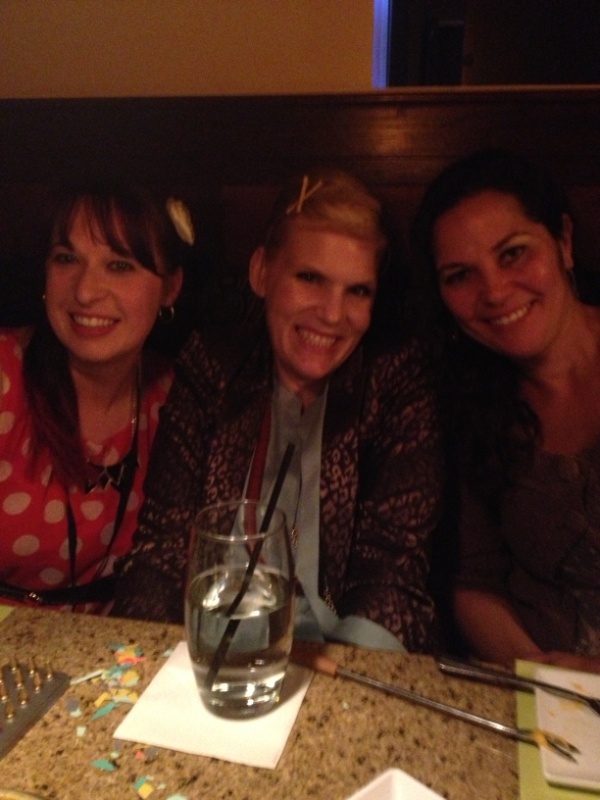 Me with new friends Rachel and Anna

3. I met Cathleya from Wedding Bee and she knew who I was. Oddly enough this happened on Saturday, technically after Alt Summit was already over. I was in the hotel lounge space, throwing my remaining business cards at anyone I came across. One of those people was Cathleya, the Editor-in-Chief of the juggernaut website Wedding Bee and also Managing Editor of Momtastic. And when she saw my name and my business card, she said “I know you from Twitter!” That was crazy. AND even crazier, we are in the beginning stages of discussing ways we can collaborate. So that happened.

4. I held a skunk. Never really thought I’d type those words, but there they are. And I have the pictures to prove it. 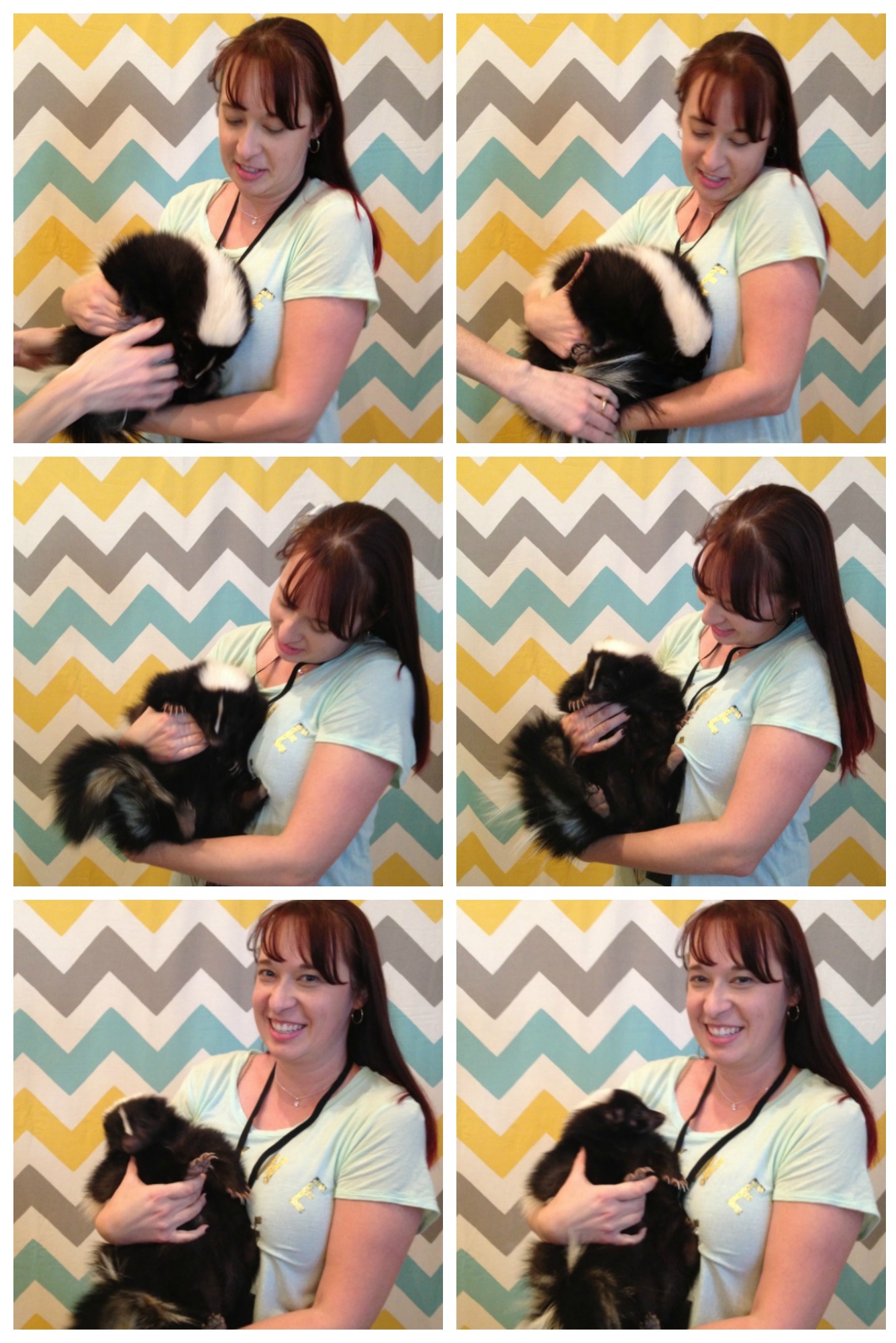 5. I found out my skin is nearly flawless. At the Friday night mini-parties, conference sponsor Bremenn Clinical was offering free space age face scans to reveal your trouble areas. I explained I wasn’t a beauty blogger and I didn’t want to waste their time, but they encouraged me to try it, so I did. And I learned that with the exception of some dryness, I’m really great at taking care of my face. The technician kept telling me I had some of the highest numbers she had ever seen in certain categories. I’m basically a facial skin maintaining genius. I think this means, by Internet law, I must now become a beauty blogger.  Allegedly we will be emailed the full, detailed results of the face scan and I’m really excited to share this in more detail, even though it’s not really something I write about, because it was so darn cool.

6. My Instagram was hacked. Hey, I didn’t say everything was crazy in a GOOD way.  At some point on Thursday afternoon I started having trouble uploading to Instagram. And your Instagram malfunctioning while you’re at Alt is basically the worst possible thing that could happen to you (by the time the conference was over, there were over 15,0000 images tagged with #altsummit).  It started when I received an email from Instagram informing me a password change request was requested.  Well, I certainly did not request it so I clicked the link to report it and I thought that would be the end of it.  Then later on I noticed I couldn’t comment on any other photos. I thought it might be the weird password issue so I changed my password myself. It didn’t fix the problem, and I thought maybe it was trouble on their end.  Then, several hours later, as I’m going to bed, I realized that none of the captions I had been posting with my photos since that afternoon had gone through. I was so stressed out. I had entered a TON of giveaways and contests that needed captions with certain hashtags, and none of them worked.  Grrrr. I started a new Instagram account so I could continue to share my Alt updates.  On Friday I spent several minutes trying to figure out how to contact Instagram so my account could be fixed, but of course there is no direct email or phone number listed. Meanwhile, everyone I came across who was told about my Instagram horror gave me the most pained, sympathetic look I had ever seen.

By a stroke of luck, I sat next to one of the Cricut reps at a Friday afternoon session and we talked about how I was at the Cricut dinner and had won a machine. She told me she wanted to follow me on Instagram and I told her about how I was hacked and it wasn’t working right, but she could still follow me. She pulled up my profile on her phone and that’s when I noticed my blog link in my profile had been replaced with a spam link! I had no idea … I had never even thought to look at my profile tab during the whole ordeal.  So I fixed it on my phone, and after that everything was functioning again. Whew. I was so relieved and grateful to that Cricut rep; I wanted to full on sloppy kiss her but managed to restrain myself.

So the moral of the story is, if your Instagram starts acting up, immediately check your profile page to make sure you’re not promoting a spam link. 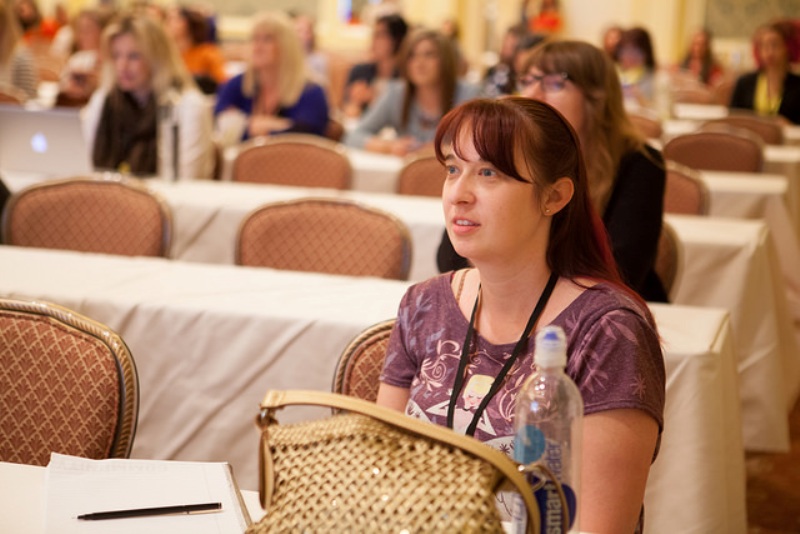 This is just the surface of the crazy amazingness that was Alt Summit 2014. But just in case I start to get too full of myself, here’s a picture of me at watching one of the panels, with no makeup on and my bra showing.  Some things never change.