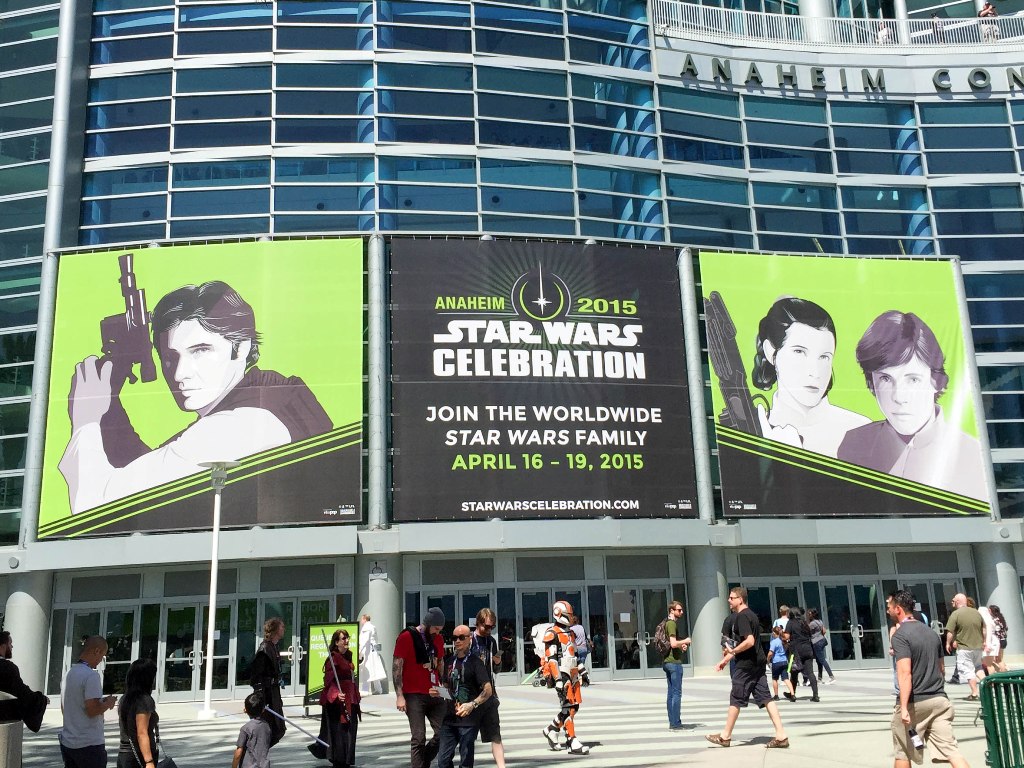 I was sexually harassed at Star Wars Celebration. There’s a sentence I never thought I’d type out. I’m way past my prime, I’m a little pudgy, and pretty much the most modest person you will ever meet. I honestly don’t think of myself as someone who would attract any kind of sexual attention, a combination of childhood teasing about my looks, years of rejection from dudes I liked, and low self esteem. But unfortunately the sentence is true, and the result is a whole bunch of emotions which I’m going to dump out here.

I had just finished the PodCRASH panel which had gone very well (more on that in another post). I exited the room and was standing in the crowded hall area with my fellow panelists and friends. I was chatting with one of my male friends and we were both also looking down at our phones. Suddenly I felt something behind me, brushing at my skirt as if something was lifting it up. I quickly stepped forward and spun around. Now in front of me were three guys, dressed in Jedi robes. I could see one bro quickly hiding something behind his body. At first I thought it was a lightsaber but reflecting on it, I’m now positive it was a selfie stick. It disappeared from my view very quickly. A different bro, with a huge smile on his face, said, “Oops, sorry about that, it was an accident.” All of this – from first feeling the brush against my skirt to the rehearsed apology – went by in a flash, less than five seconds probably. As Bro #2 was talking, Bro #1 disappeared into the crowd. I stared them down while the other two also blended into the crowd. After a few seconds I turned back to my friend who looked at me and said “Um. Wow.” I responded with “Yeah, so that just happened.” And then we both went back to our phones.

It took several minutes to process what had happened. My initial reaction was to shrug it off and think it’s not a big deal.

But you know what, ladies? It’s a big deal. It’s a big effing deal. Women should be able to wear skirts without worrying about creepers taking secret pictures of their underwear. By the way, the joke is really on these guys because Modest Mindy was wearing booty shorts under her skirt, and my thighs look like cottage cheese. So, enjoy, fellas.

Anyway, ladies, let’s all agree, right now, that anyone trying to get a glimpse or take a picture of our nether regions without our consent is a big effing deal.

About 10 minutes after the incident took place I was finally ready to punch the three bros in the face. In my head, I came up with several more appropriate reactions than what happened in reality, which was me freezing in shock and confusion. Why didn’t I lunge after them? Why didn’t I shout or scream or do more to publicly shame these guys? Why didn’t I use the phone in my hand to quickly take their picture and then post it on Twitter for all of #SWCA to see? Instead I fled, ironically passing by a large “Cosplay is not consent” poster on the way out. I had no desire to be in the convention hall any longer. Still among my friends a couple hours later, the incident came up again and the male friend who was with me during the incident apologized for not doing more. “I should have reacted differently, and I’m sorry.” Of course he is forgiven. I should have reacted differently, too. I should have immediately grabbed the stick or lightsaber or whatever it was and smashed it. Or if it was indeed a camera, I should have taken it to security as evidence. What is wrong with me? Why didn’t I do this? 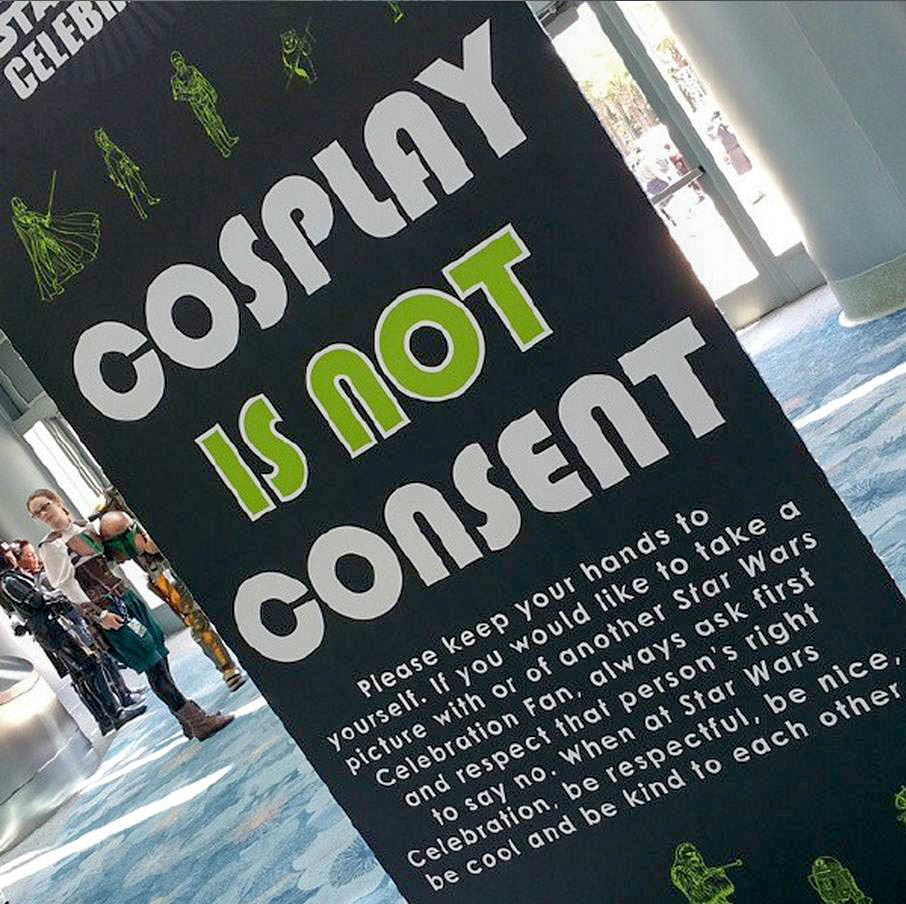 Once I was home I did a lot of Internet searching about the definition of sexual harassment. I knew I felt violated and my circle of friends validated my feelings, yet I still wasn’t convinced as to whether a stranger lifting a woman’s skirt was considered harassment. Isn’t that crazy? When people told me they were sorry it happened, my initial gut response is to say something like, “Oh it’s really not that big of a deal, it’s not like I was groped or raped, those are the real problems.” Why on earth would I think it’s okay to defend the victimizers? It’s sick that society thinks this sort of thing is not a big deal. I feel like people, both men and women, have a “boys will be boys” attitude towards it. Towards secretly taking pictures of what is underneath a woman’s skirt.

Here’s where my story takes a frustrating and disappointing turn. Shortly after it happened, during my “in shock” stage, I posted about it on Facebook. My first comment came quickly, a “WTF” from a female friend. The second comment was an insensitive joke by a male friend, which I quickly deleted. The third comment was by a male relative, completely ignoring my “whoa guys I was just sexually harassed by a stranger” post and asked me a question about obtaining event passes (but at least he acknowledged the grossness of what happened to me a little later). This was followed by about 10 additional female friends, as well as my husband, offering apologies and support.

Hey, uh, guys? Not cool. Not okay. I can’t really wrap my head around the fact that this needs to be explained. Don’t make light of sexual harassment. Just don’t. It’s not funny. Ever.

But the nonchalant reaction from these two men makes me wonder … Is a stranger lifting up a woman’s skirt such a non-event to men that it can be so easily brushed off? Is it so commonplace that jokes about it are okay? I mean, it took a while for me to even come to the conclusion that what just happened was wrong. Why did it take me TEN MINUTES to realize that a stranger trying to get a glimpse of my genitals is actually an inappropriate act and constitutes sexual harassment? Why was I still doubting myself when I got home, several hours later? It’s a puzzling and depressing situation all around.

I have attended several types of fan conventions, including San Diego Comic Con, and I guess I’ve been living in a dream fairy tale world. I knew these types of things were happening at conventions but I had never witnessed it or experienced it myself. How many women like me are out there – where this has happened and they stayed silent. Hundreds? Thousands? Tens of thousands? It fills me with rage.

I thought about all these things while driving away from the convention center – the incident itself, my reaction, my male friends’ reactions, how many other girls were victims that day, embarrassment leading to anger leading to frustration leading to disappointment – and I cried the whole way home.

I’m writing this out because I want you to be stronger than I was. If this happens to you, know, right away, that it is not okay. Stand up for yourself, be confrontational, make noise. It’s okay. We need to be standing up for ourselves. We need to be showing society that we won’t tolerate this behavior.

But if you freeze up because you’re not sure what’s happening, or because you’re embarrassed, or because you’re frightened, don’t be ashamed by your natural reaction. I have the feeling most women react the same way. But don’t dismiss the act because of this reaction. Be angry about it, share with your friends and loved ones, and spread the message that this is NOT okay. It’s actually a really big deal.