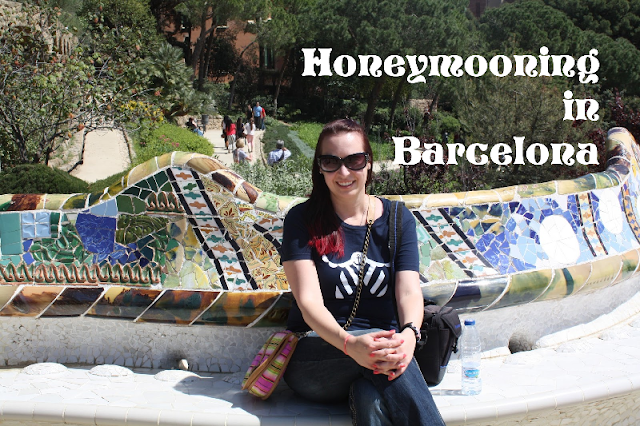 Our honeymoon adventure actually started at 3am on 4.16.2013.  We had to be at LAX by 4:30am for a 6:30am flight so we cabbed it to the Van Nuys Flyway and took the bus from there.  All of our travels went smoothly, but at the time it was very stressful.  LAX to Chicago to Philadelphia to Barcelona.  So many things could have gone wrong, but everything went very well.  Our flight out of Chicago even left 20 minutes late but we landed early in Philly.  Flying is weird. 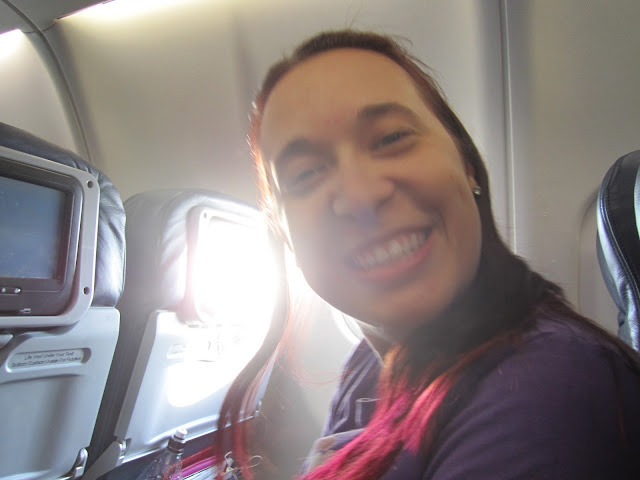 {The first and worst picture of me on our honeymoon}

Our flight to Barcelona, my first transoceanic flight, couldn’t have gone any better.  Our plane was less than 50% full, so Mr. BFT and I each got our own two-seat aisle to ourselves, meaning we could stretch out and I even slept, just a little (I cannot sleep on planes, no matter how many drugs or booze I ingest).  Eight hours later, we were circling over Barcelona. 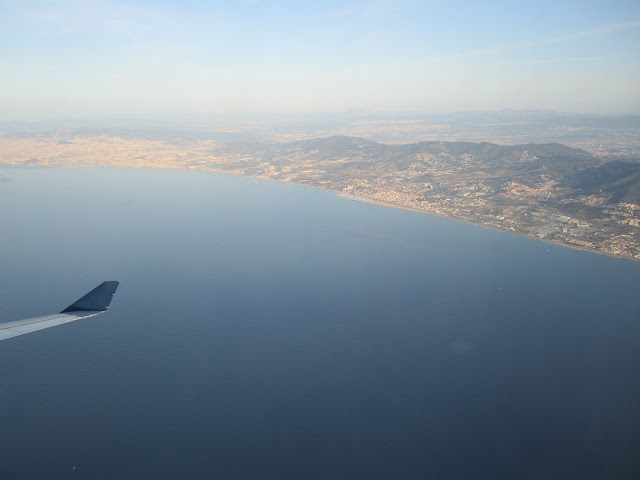 From the airport we took a taxi to our hotel, aptly named the Barcelona Airport Hotel.  We found it online via a http://www.between9and5.com, which searches for day rate hotels.  Our room was available from 9am to 5pm, which was just perfect for us, since our flight landed at 10am and we had to be on the ship at 5pm!  It was so great to have a place to shower and refresh a bit before we set out to explore Barcelona for a few hours. 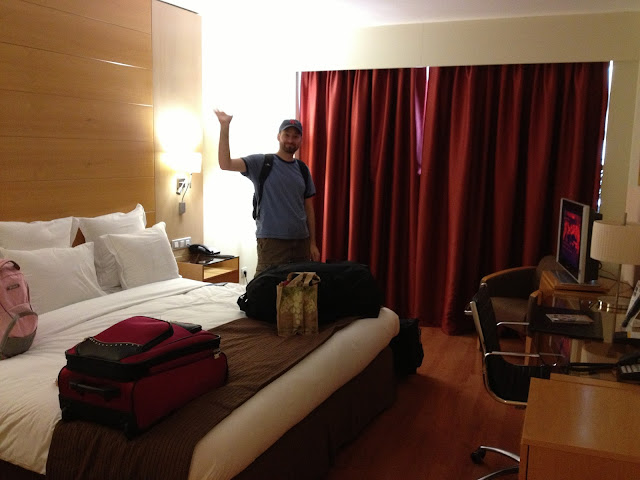 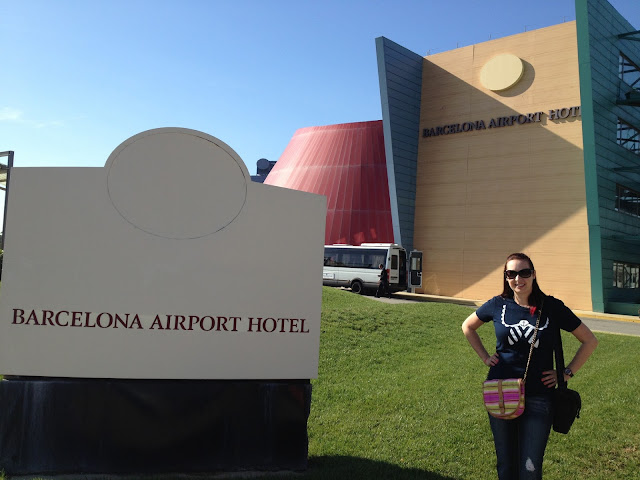 We had done a little research about the public transportation system, and found there was a bus into the center of the city that started right outside our hotel, for only two euros per person.  BUT, we quickly discovered the bus made about a billion stops on the way.  It took us nearly an hour to get to our destination, putting both of us in a bit of a sour mood to start the day (but hey, at least it was cheap).  Once we came to our stop, we connected to the metro system.  The Barcelona metro system is fantastic.  It’s clean, convenient, and easy to navigate even if you speak un poco Español.  Here’s a little metro tip – the T10 ticket gives you 10 rides on the metro for 10 euros, AND you can share your ticket.  So for me and Mr. BFT, we bought one T10 ticket and shared it, and it was just perfect.

Our first stop on the metro line was La Sagrada Familia.  La Sagrada Familia is a large (impossibily large) Gothic style church designed by Gaudi, who died in the 1920s before it was finished. The church is still under construction and won’t be finished for several more years.  It’s so impressive and breathtaking.  I took a lot of close-ups but we didn’t have time to walk far enough away to get a full shot of it.  Luckily there are plenty on the internet, if you are interested in seeing it.  I hear the inside is beautiful, but we didn’t have time to wait in line for a ticket, given everything else we wanted to see. 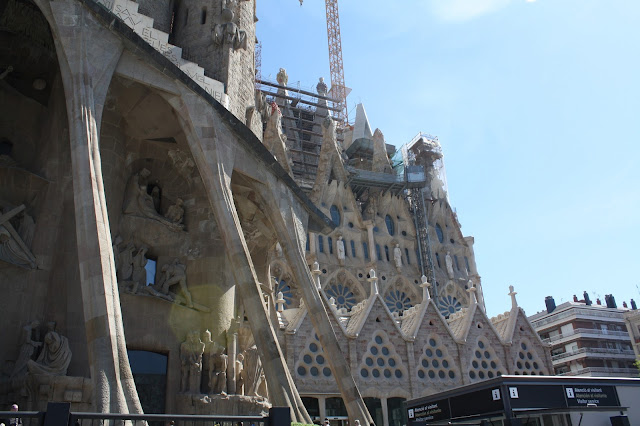 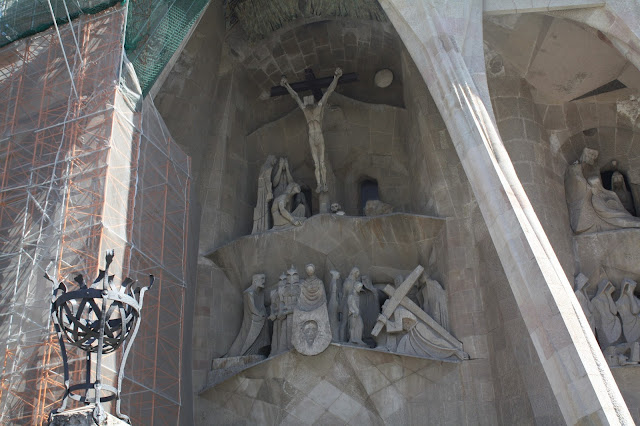 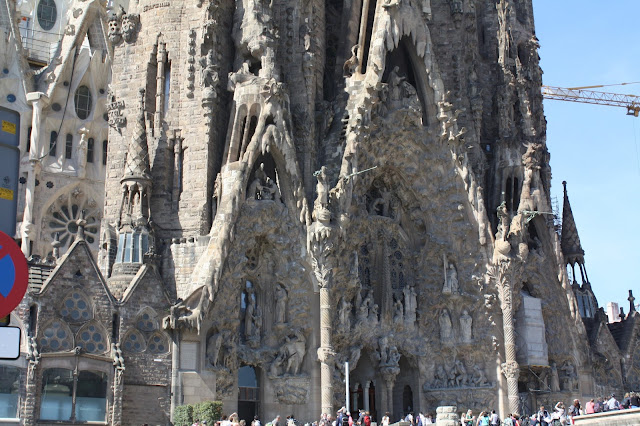 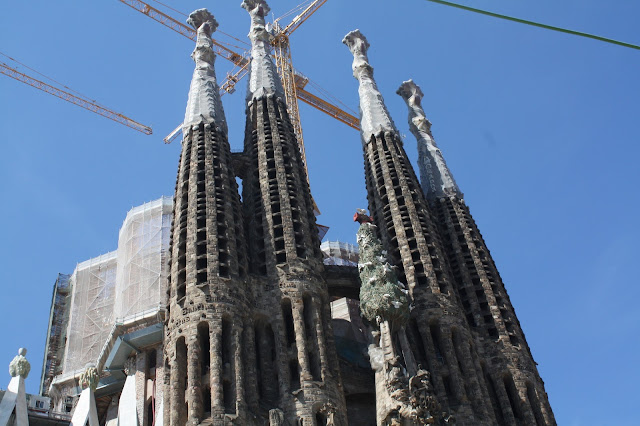 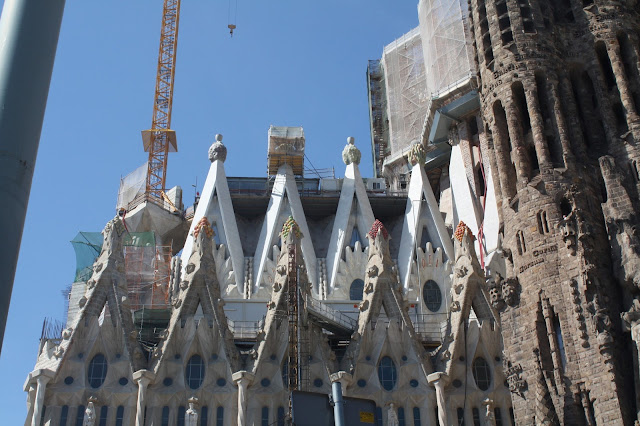 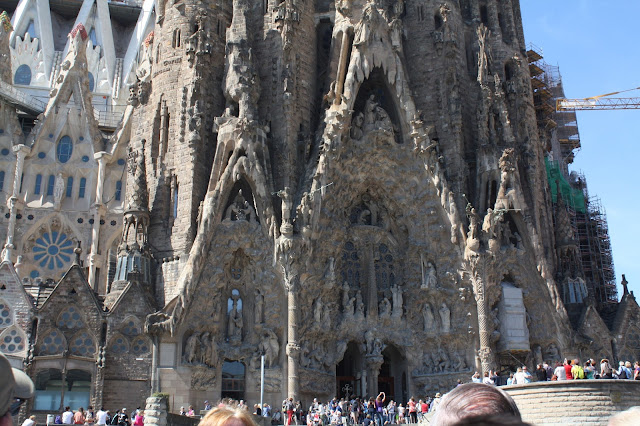 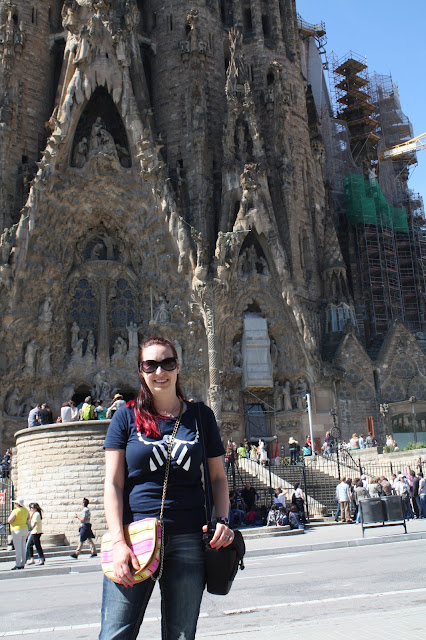 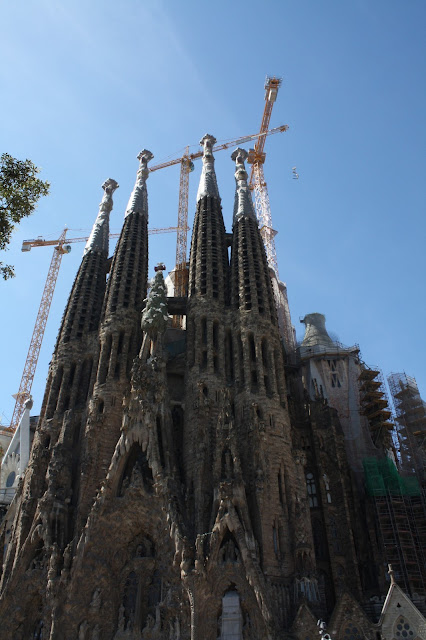 From there we took the metro to the closest stop to Parc Guell.  It’s a little out of the way but based on pictures it was a must-see for me.  The walk from the metro to Parc Guell was about 20 minutes and most of it was up a steep hill, but we were rewarded with beautiful art (more Gaudi) and sweeping views of the city. 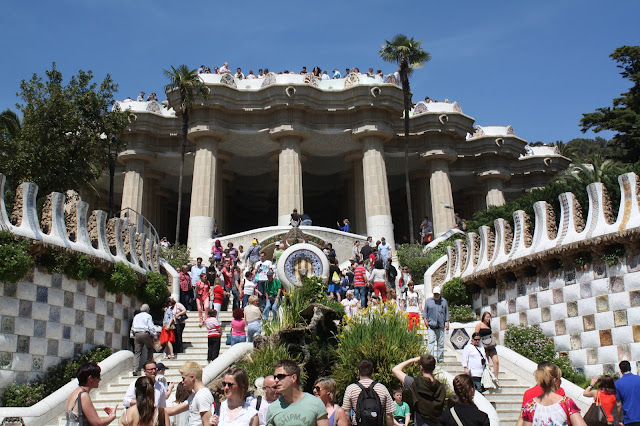 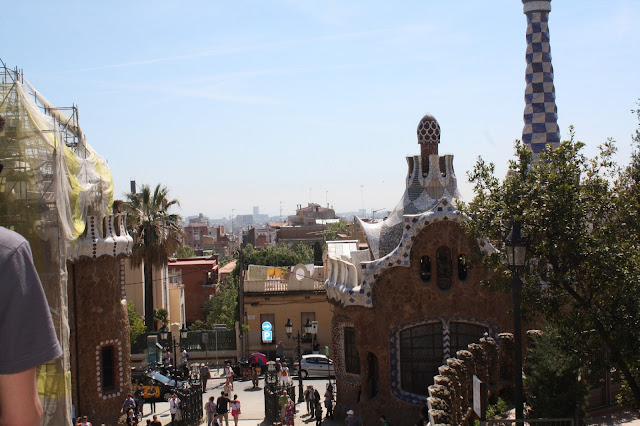 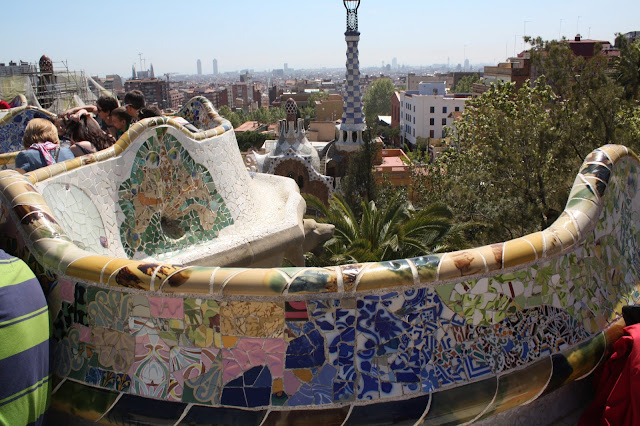 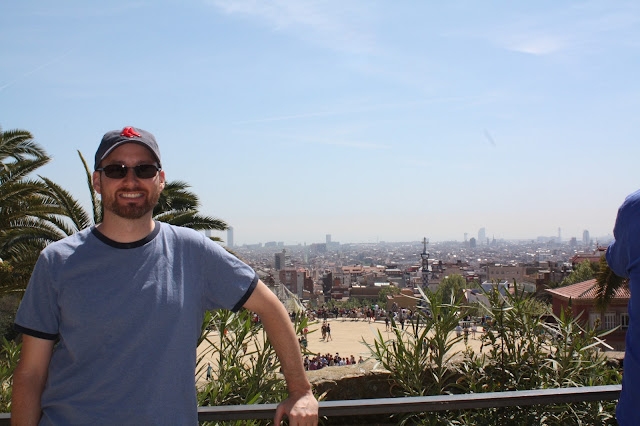 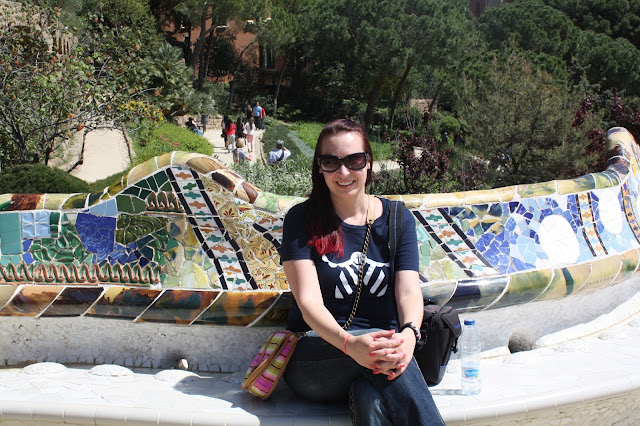 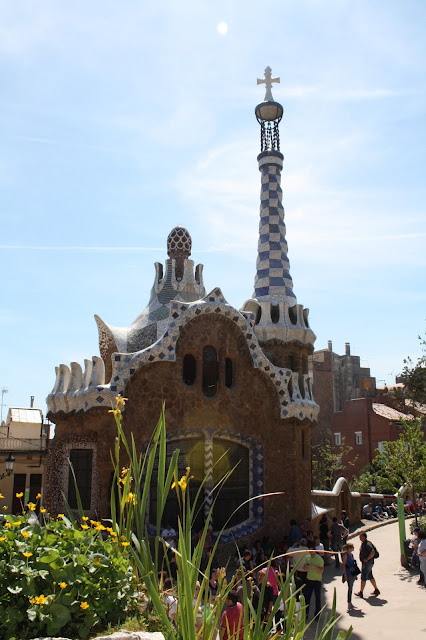 After Parc Guell we headed back to the metro and took it to Placa Catalunya, a major plaza in Barcelona and the “top” of the famous Las Ramblas, a tree lined pedestrian street with shops and restaurants and annoying street vendors.  We walked the street and soaked up the atmosphere of Barcelona. 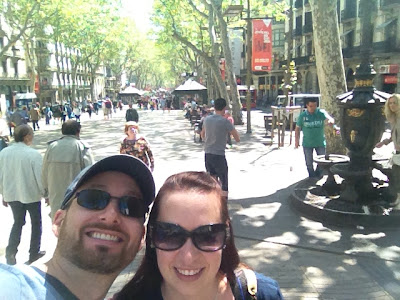 We also stopped in a convenience store, Carrefore, and bought four bottles of wine to take on the ship.  Each bottle cost between 5 and 10 euros, and even with the $15 corkage fee charged by NCL, it was way cheaper than buying wine on the ship.  We walked to the “end” of Las Ramblas, near the Christopher Columbus statue and walked around the neighboring Gothic Quarter, admiring the architecture and keeping an eye out for a yummy tapas dinner.  Unfortunately nothing seemed super appealing and we ran out of time, so we decided to take a taxi back to our hotel to get our things, and we would have dinner on the ship.  If we had planned it a little better, we could have taken public transportation back to the hotel and saved a bundle, but we lost track of time.  Our time in Barcelona was way too short!

Thanks to an abundance of taxis it was very easy to get from Las Ramblas to our hotel, then our hotel to the ship.  Check in was very easy, since we were arriving so late.  And once we were on the ship, we realized no one stopped us to pay the wine corkage fee!  In fact, no one checked our bags between the port shops and the gangway, to Mr. BFT went back off the ship and bought 2 fifths of rum and a 6 pack of Coke and he carried them on, no problem.  We had a very full mini-fridge.

We had a Meet and Greet with our friends from Cruise Critic at 6pm in the Lounge so we ran over there to chat IRL with all the people I had been chatting with online for nearly a year.

We sailed away from Barcelona at 7pm.  Mr. BFT and I stopped at the Blue Lagoon for margaritas from our friend Ed (who we would visit many, many times), and went to the Deck 7 Aft to watch the shore get smaller and smaller.  We were the only ones back there and it was magical. 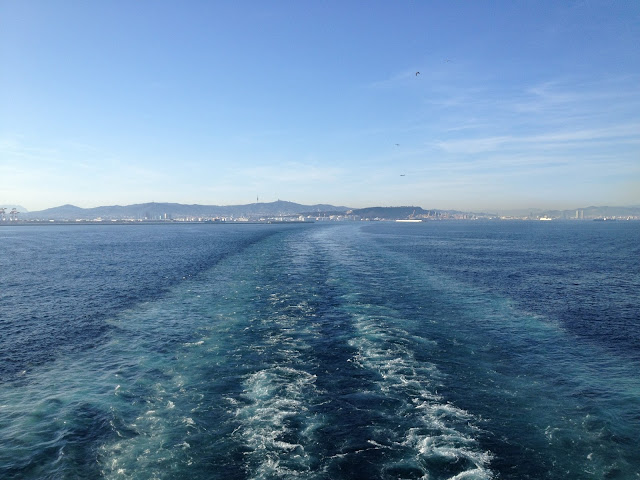 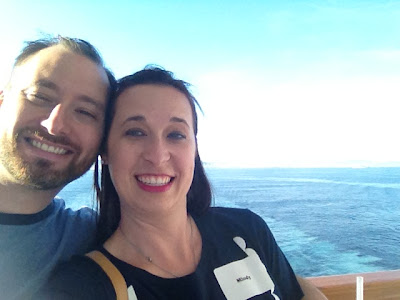 By this point we were STARVING so we went to the Windows dining room and had our first dinner of the cruise.  I believe these were sweet potato cakes with quinoa and garbanzo beans.  Man, so good!  The food was off to a great start.  For dessert we shared a couple bites of key lime pie. 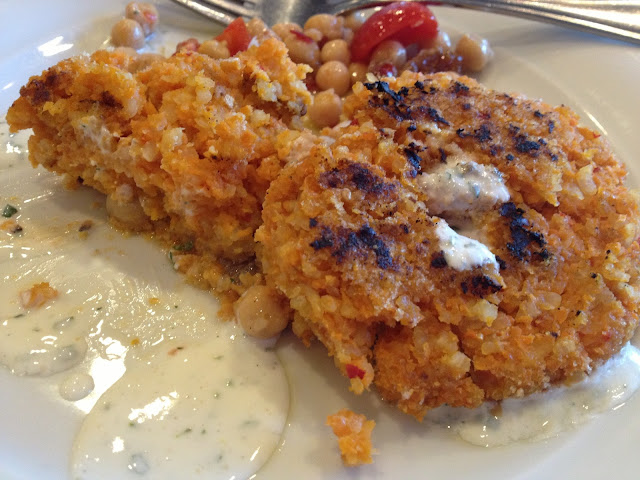 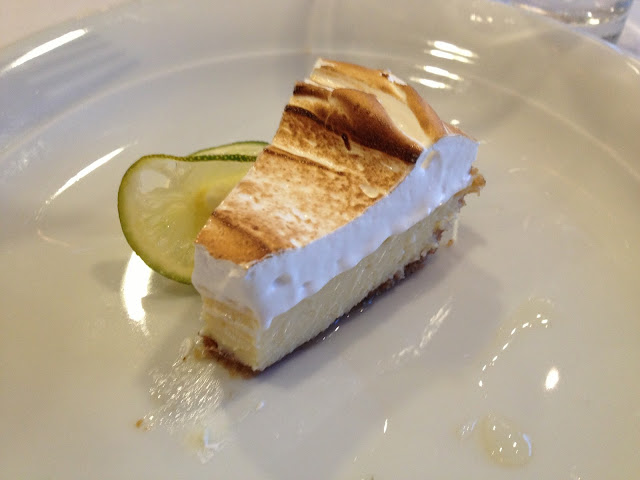 After dinner we were so beat from our day of travel that we just went back to the room and unpacked and passed out.  We had an early morning in Toulon, France!

Past Honeymoon Posts:
Chapter 1 – All Aboard the Norwegian Spirit!