This proposal story comes from Jenna of White Rabbit Photo Boutique, who was recruited by the groom-to-be to photograph the entire engagement experience, from buying the flowers, to traveling to the location, to waiting (and waiting, and waiting) and FINALLY the big moment!

The following are the photos and narrative from Jenna.  Enjoy!

I had the honor of photographing Michelle’s engagement yesterday. I can’t even begin to explain how much I love this girl, so I was ecstatic to be able to take her photos. M works with Disney weddings, so the proposal was tricky. AJ wanted to propose at Disneyland because it’s a very special place for both of them, but where could he propose that M hadn’t seen before? This was going to take some special planning, so he asked M’s co-worker Traci if she had any ideas. Traci mentioned they were going to be doing some photos in the Dream Suite. She said she doubted she’d be able to sneak AJ in with a photographer, but she was going to see. AJ knew Michelle would love to have the wedding team there, and he knew it would be something different and special for M. It was tricky though, up until ten minutes before the proposal we still weren’t sure if we were going to be able to make it happen. Right before we were about to switch gears and propose in New Orleans instead, the stars aligned and everything worked out amazingly. It was only able to happen in the Dream Suite because of a number of things that came together, so we were really glad when it all worked out in the end. 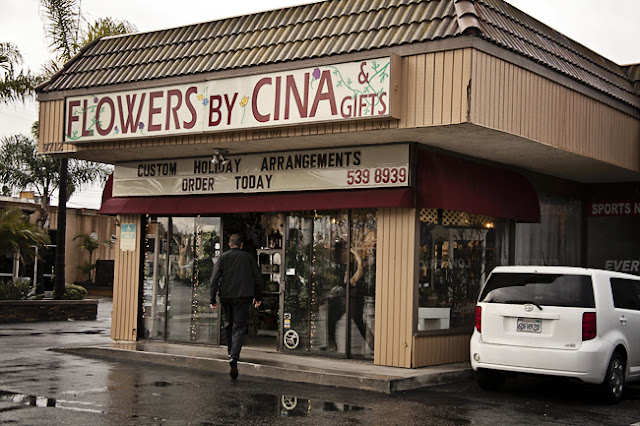 Picking up the flowers. 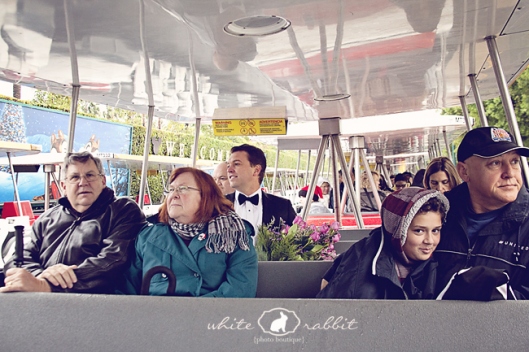 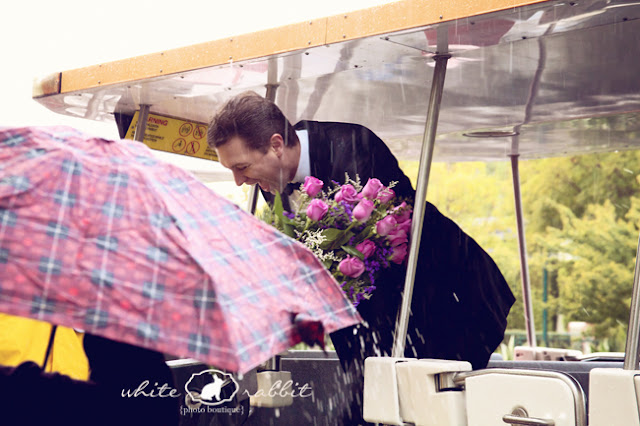 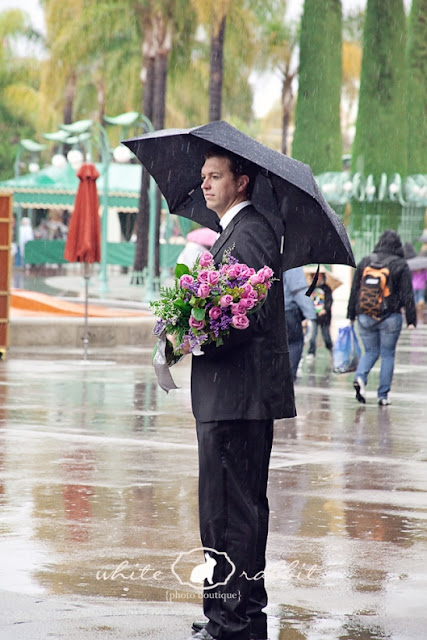 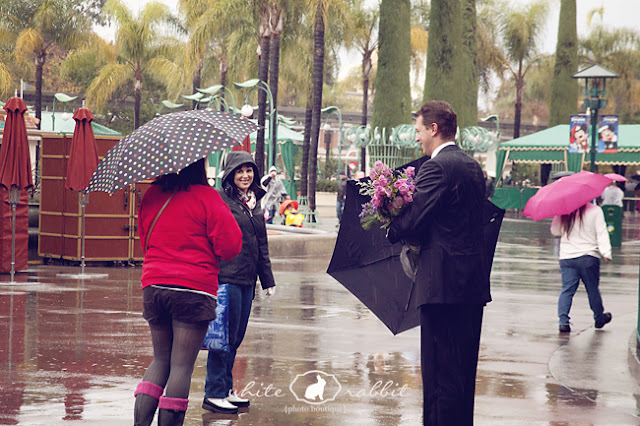 Everyone wanted to know where he was going to propose and if they could watch. 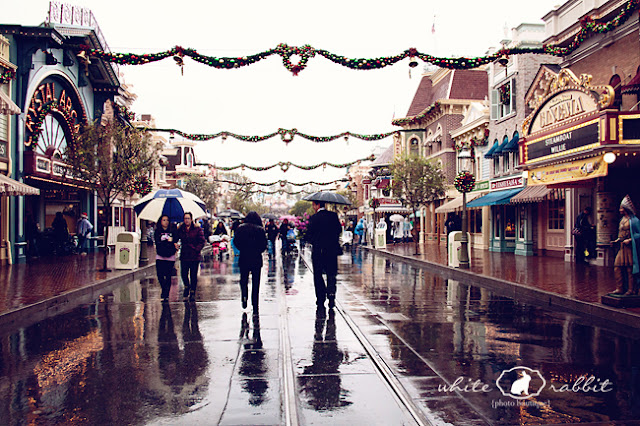 Walking to New Orleans; it was SO WET! 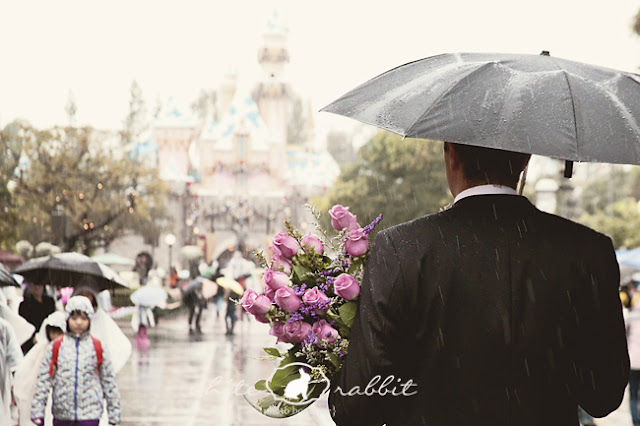 Waiting to see if our plan would work. 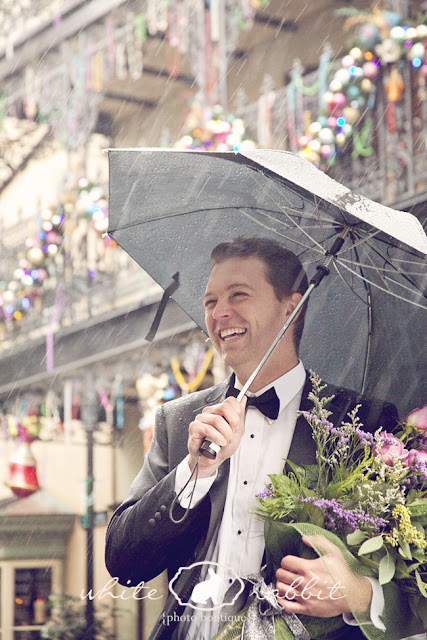 Waiting some more in Club 33, because it was too wet to wait outside. Um, yeah. You don’t have to tell me twice (this is when I began to geek out). 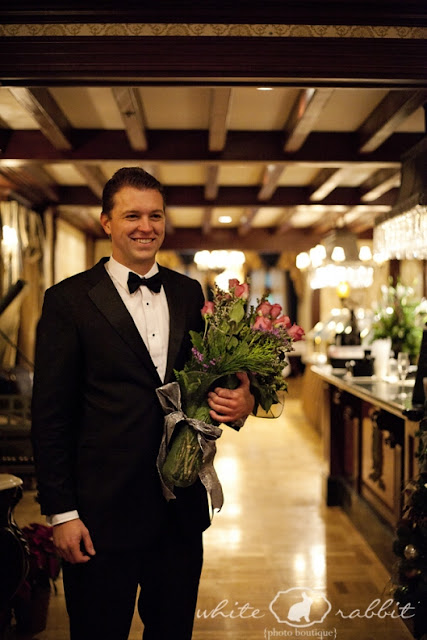 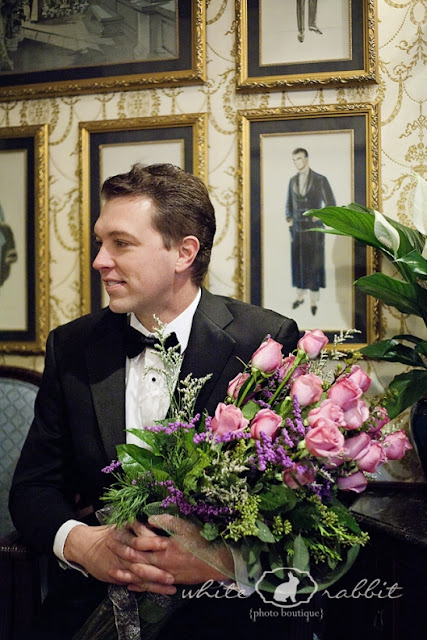 At this point, we were not sure if he’d be able to propose in the Dream Suite, so we were getting ready to use Club 33 as our backup plan, but miraculously with a LOT of approval, pixie dust, and Disney Magic, it all came together. AJ hid in one room, I hid in another.
AJ waited anxiously for everyone to arrive: 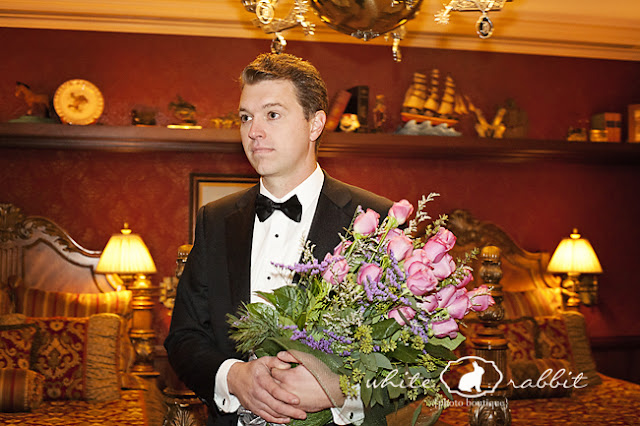 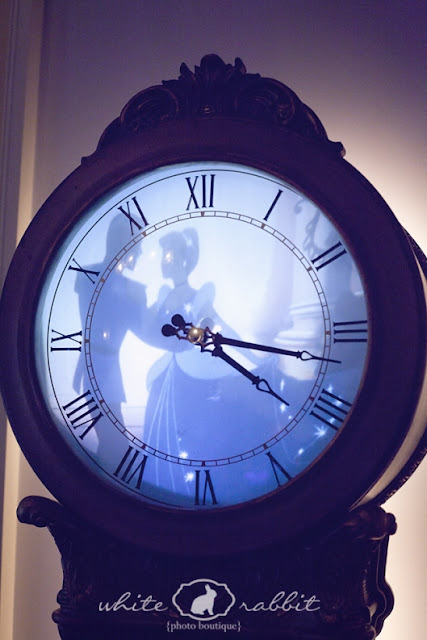 (Watch this “Behind the Scenes” clip of AJ waiting in the wings!)
The wedding team came into the suite for the event that had been previously planned, and suddenly, the clock struck 12:00 and “A Dream is A Wish Your Heart Makes” began to play.  That was our cue! I came out and snapped photos, and AJ came out to propose. 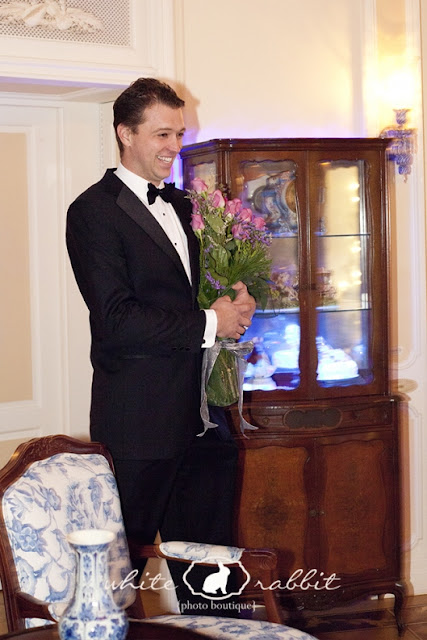 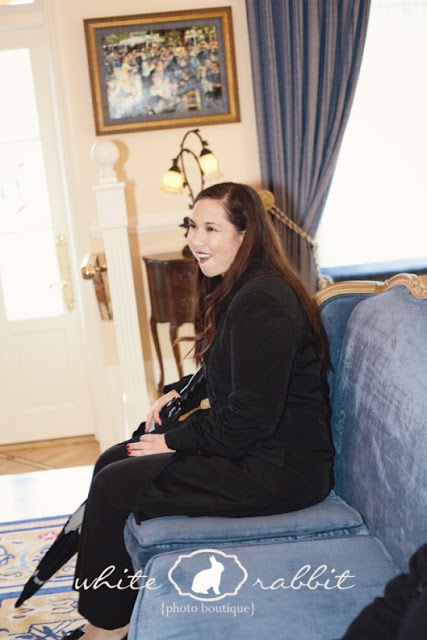 Then she noticed I was there taking pictures: 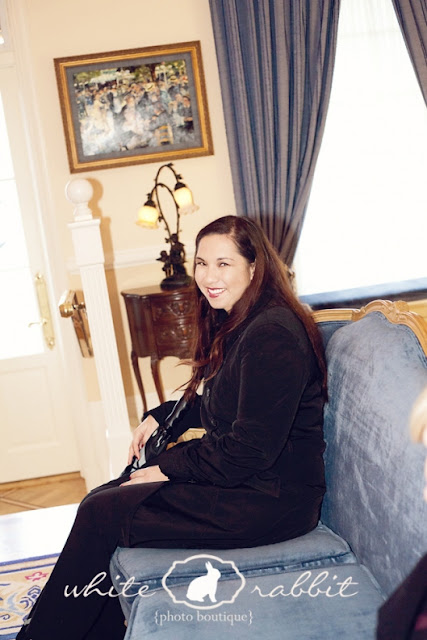 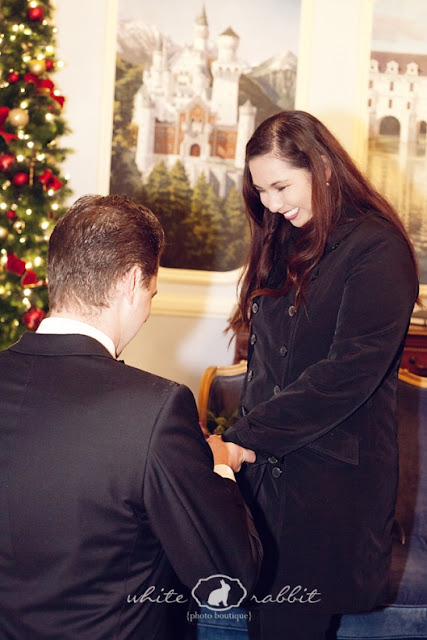 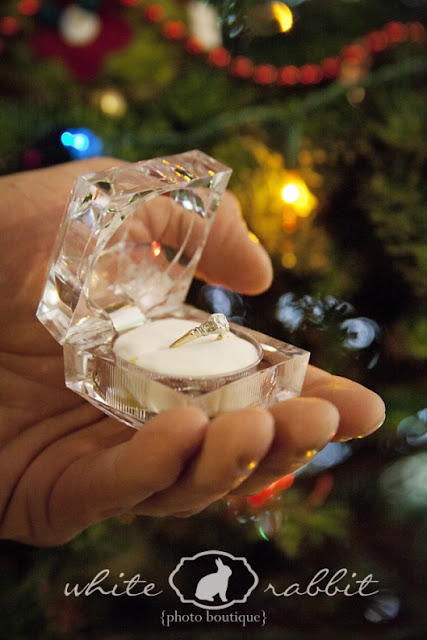 We were all a crying mess: 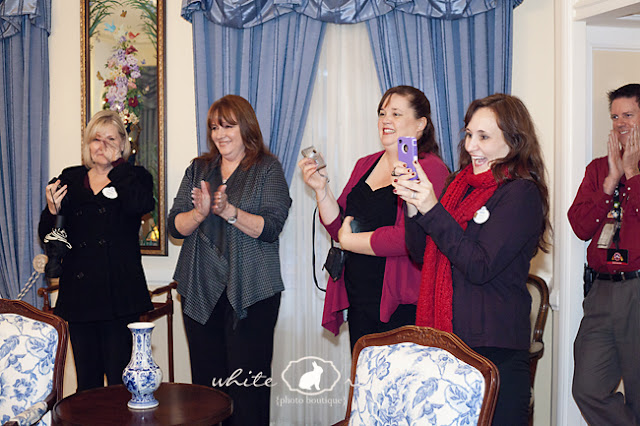 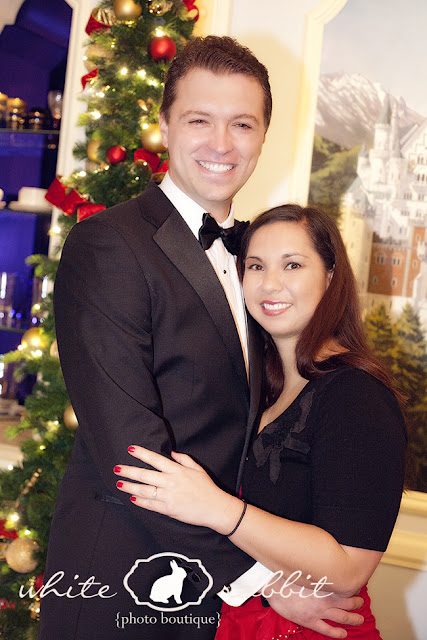 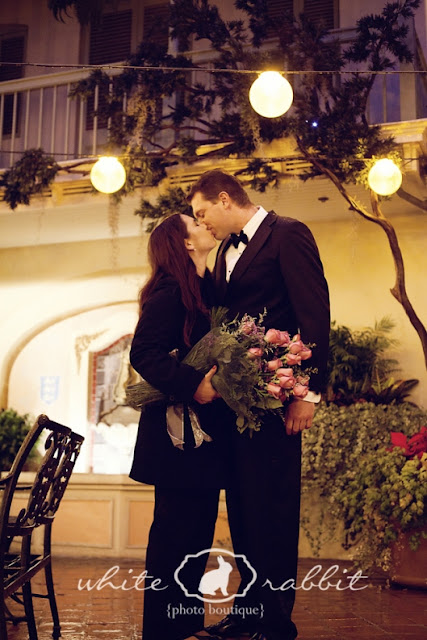 Our work was done, and it was an amazing day. We were told this probably would never be able to happen again, it was kind of crazy that we were able to get it to happen at all.
Congrats to Michelle and AJ!  I can’t wait to see what kind of wedding a Disney Fairy Tale Wedding Consultant would plan for herself!!!!!
Thanks to White Rabbit Boutique for sharing these photos and wonderful proposal story!
Would you like your Disneyland Engagement story featured on Budget Fairy Tale?  Contact me via the Submissions page!
0 Shares
Tweet
Share
Pin
Share