Hello, and Happy Tuesday everyone!  Today we are sharing another wedding spotlight, this time from Jackie and Chris.  They were recently married at Walt Disney World and were kind enough to share their experience (and their budget) with us!  Thanks Jackie and Chris!  (And, where are my DISNEYLAND or CRUISE couples at?  I would love to shake things up and feature a new location spotlight!)


(Please note the dollar figures provided were the rates at the time this couple signed their contract, and are subject to change at any time.)

All photos are by Randy Chapman.

Why did you choose a Disney wedding?  We chose a Disney World wedding not only because it’s my favorite place, but because it’s a place that has so much meaning to both of us. After Chris proposed in front of Cinderella’s castle, everyone kept asking us if we were going to have a Disney wedding: and we said no, because we never thought it would be affordable. Apparently, we were wrong! 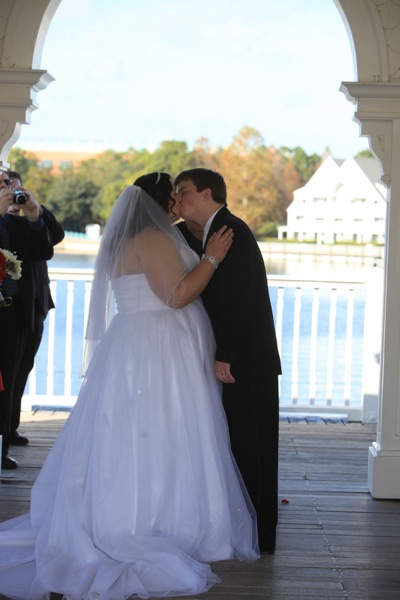 How did your family/friends react to your Disney wedding? Ultimately, no one was surprised. My dad did take some convincing (I even made a PowerPoint to show him all of the benefits of a Disney wedding), but everyone ultimately agreed it was the best decision.

What was your theme? We didn’t really have a “theme,” inasmuch as our theme was “Stuff We Liked.” I just wanted our wedding to be a casually formal, colorful event. 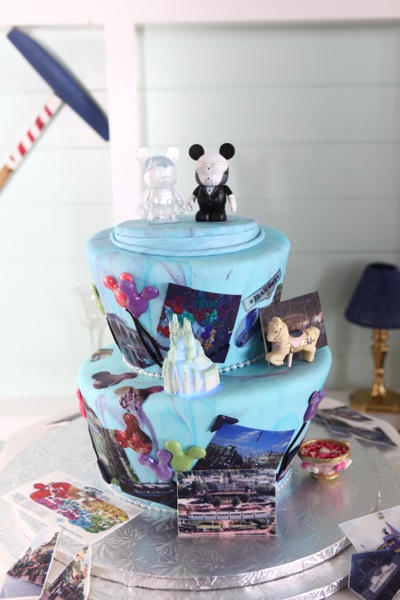 Tell us about your ceremony.  Did you include any Disney touches? Of course! I had Hidden Mickey crystals in my bouquet, as well as in my bridesmaids’ bouquets.  My wedding dress was from the Alfred Angelo DFTW line, and my earrings had Hidden Mickeys. My “something blue” was a wish bracelet I tied around my ankle that said “I wish to live the life of a princess.” We also surprised our guests with an appearance from Major Domo, who interrupted our ceremony and brought us our rings on a glass slipper to our guitarist playing “When You Wish Upon a Star.” However, other than Major Domo’s appearance, we didn’t incorporate any other Disney music into our ceremony, and we really tried to keep the “Disneyfication” subtle. 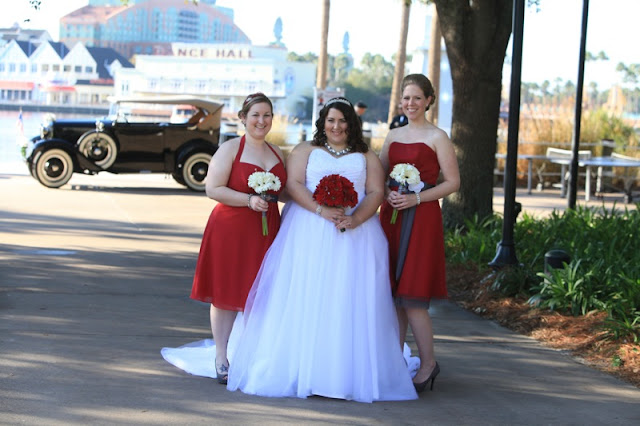 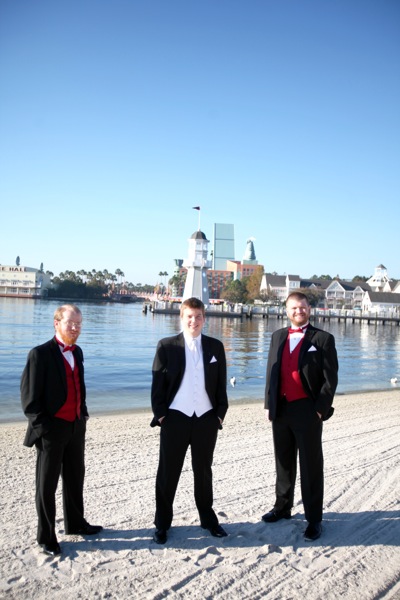 Describe your reception.  Was it completely traditional or did you do anything unique? Our reception was quasi-traditional: we did the traditional first dance and father/daughter dance, but we skipped any of the tosses. We had a sweetheart table instead of a head table. Because we had a brunch reception, we didn’t really have any dancing or alcohol; instead, we just had a relaxed family get together. We did, however, have Mickey and Pluto show up to our wedding, which is certainly something we only could have had at a Disney wedding! Our reception venue, The Attic, is also fairly non-traditional since it is not a ballroom, but it helped create the cozy atmosphere I wanted to achieve. 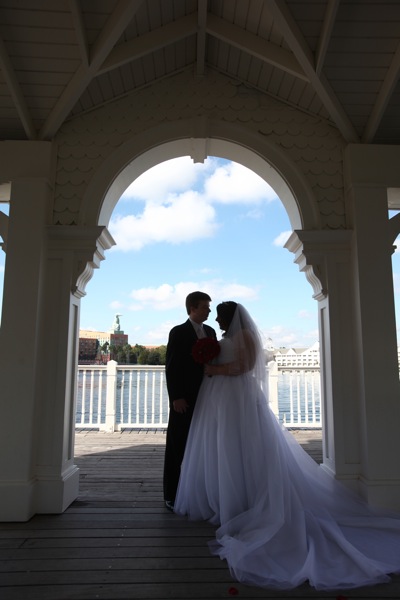 What did you splurge on?  We splurged on having Major Domo, Mickey, and Pluto at our wedding. We also had a Model A Ford for transport, and it felt amazing riding down the Boardwalk in that car! Where did you save money?  We saved money on floral. The only flowers I had were daisies which are relatively inexpensive, and I made my own non-floral ribbon centerpieces. I also really cut money by having a small wedding. My husband and I are rather shy, so this worked well for both our personalities and our budget. 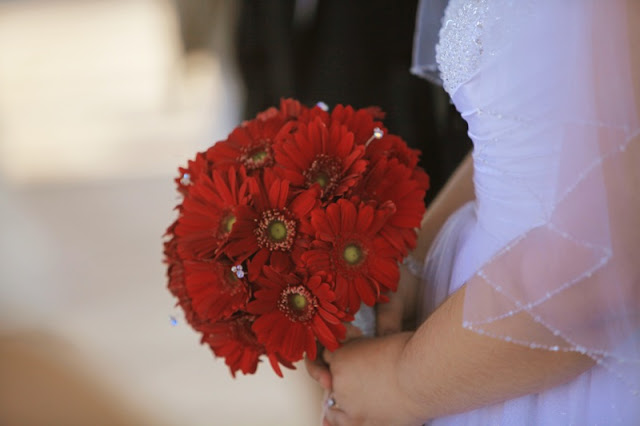 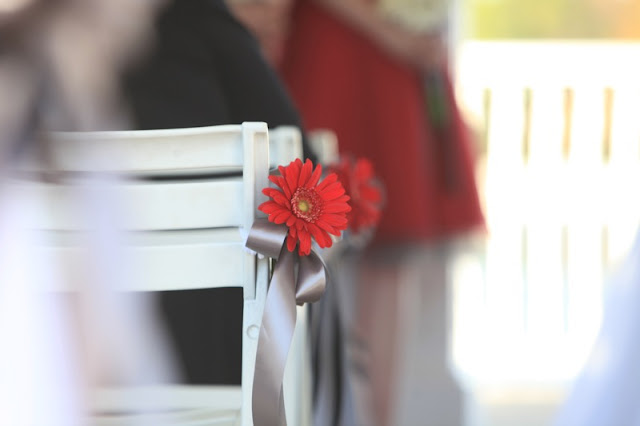 What was your favorite moment of the day? Besides the mushy-gushy saying of the vows and stuff? (I assume this goes without saying!) Definitely having Mickey and Pluto come to our reception! Everyone was so happy to see them, and the one-on-one character interaction we received was almost priceless. It has certainly spoiled me for all future character meet-and-greets.

What would you change if you had to do it all over again? The Dessert Party.  Even though I had a great time, the food was terrific, and having fireworks pictures is such a blessing, I don’t think I would have had a dessert party if I could do it all over again. The fireworks started at 9:00pm and I had been up since 5:00am. I was exhausted and I think most of our guests were, too. 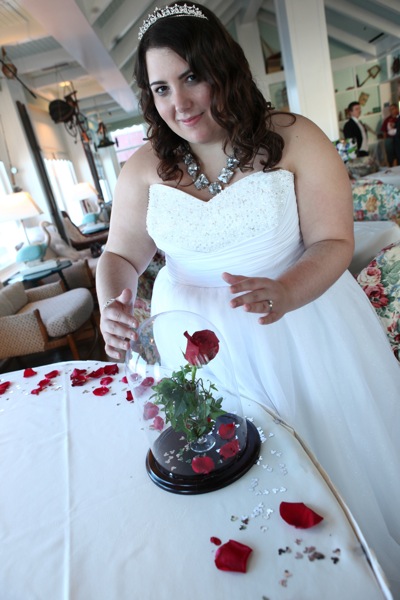 What advice would you give to couples that have just started planning their Disney wedding? Most importantly: become active on the DisBoards (www.DisBoards.com)! I have made so many great friends through the boards, and the advice I received from them was priceless.  But really, don’t stress the little details. Disney’s Fairy Tale Weddings has a great team and they know exactly what they are doing and how things should be done.  Even if you forget your veil and have to send your Matron of Honor on a mad dash mere moments before your ceremony, they’ll still take care of you. (Not like I would know about that from experience or anything…) 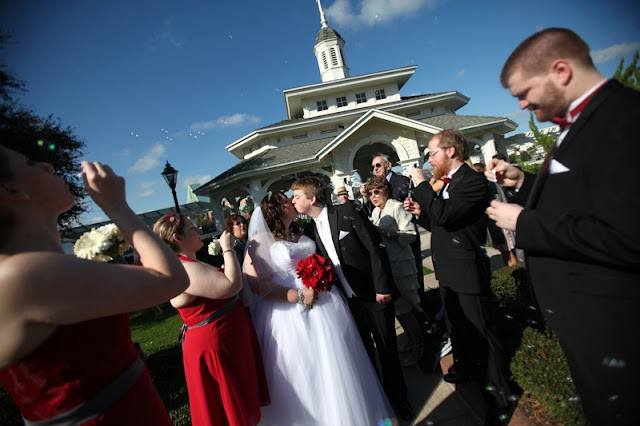 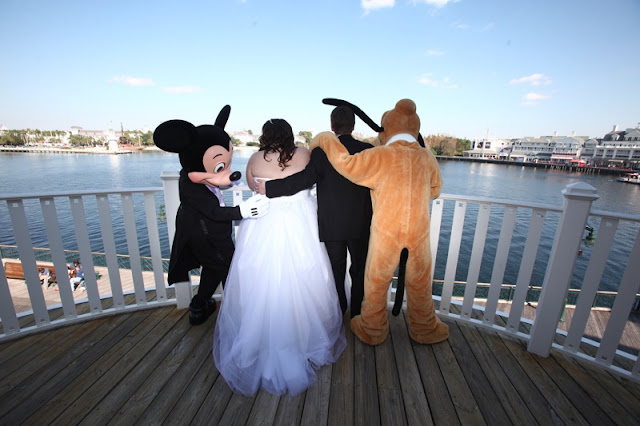 “Wishes” Music Piped in at Dessert Party: $500
Cake: $450
Other: Expenses include various tips, our wedding rings, attendant gifts, transportation, items for welcome folders, marriage license, and various other little “things” that tallied up to around $3500