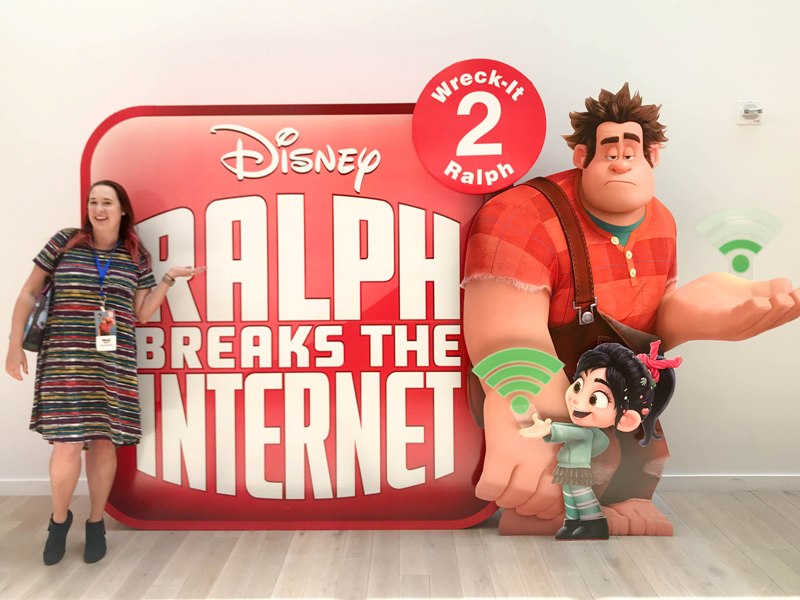 Last month I was invited to visit the Disney Animation Studios and learn all about the making of this year’s biggest movie (yep, I’m calling it) – Wreck it Ralph 2: Ralph Breaks the Internet! The first Wreck it Ralph is one of my favorite Disney animated movies and I’m so, so excited for this sequel, especially after hearing from the creators of the film!

“Ralph Breaks the Internet” welcomes back to the big screen video-game bad guy Ralph and fellow misfit Vanellope von Schweetz. This time, they leave Litwak’s video arcade behind, venturing into the uncharted, expansive and fast-paced world of the internet — which can be both incredibly exciting and overwhelming, depending on who you ask.

Since I myself am obsessed with the internet, I’m really loving the concept of this film. And it was even more fascinating how the creators of the film took a virtual world like the internet and translated it into something tangible. Guys, the detail in this film is unreal!

Learn All About WRECK IT RALPH 2: RALPH BREAKS THE INTERNET!

But first, a little more about the movie. Did you know there have only been two theatrical sequels for Disney Animated films? The first was “The Rescuers Down Under” (one of my favorites as a kid) and the second was “Fantasia 2000.” What’s even cooler is that “Ralph Breaks the Internet” is the first theatrical sequel with the same writing/directing team as the original.

In “Ralph Breaks the Internet,” Ralph and Vanellope must venture deep into the internet to find a replacement part for Vanellope’s game, or else Sugar Rush will be unplugged, forever! Much like how Ralph and Vanellope had to travel between games in the first movie, we now find them learning to navigate the much, much more immense world of routers and WiFi.

“The part they need to fix the game is at a place on the internet called eBay,” says Pamela Ribon, who co-wrote the screenplay with Phil Johnston. “Ralph and Vanellope have never heard of the internet, much less eBay, but (arcade owner) Litwak has installed a router, so the arcade is actually online for the first time. They decide to take the leap into this unknown world and ping themselves into the internet in order to find the steering wheel and save Vanellope’s game.” 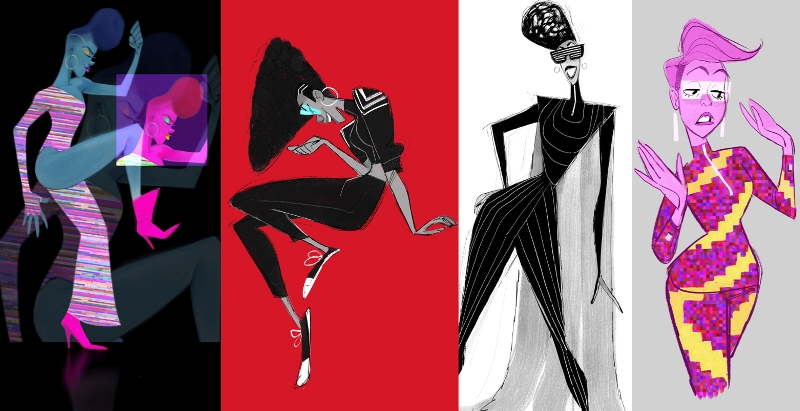 While inside the world of the internet, Ralph and Vanellope meet some new characters. First they meet Yesss, voiced by Taraji P. Henson, the head algorithm of a website called BuzzzTube (you see, I told you guys this was going to be DEEP). Yesss keeps her finger on the pulse of everything that’s hot and trending online, and soon recognizes a way to help Ralph and Vanellope earn enough money to buy her game’s replacement part.

KnowsMore, voiced by Alan Tudyk, is a hilarious new character that represents the internet’s search engine. He’s very eager to help, often suggesting “auto-fills” as an attempt to guess what people are going to say.

The film also introduces us to two new categories of characters.

Net Users are the avatars of people using the internet. When a person moves their cursor around the screen, they are moving their avatar within the internet.

Netizens are citizens of the internet, who help Net Users navigate through their searches and purchases. Yesss and KnowsMore are Netizens.

Building a physical world of the internet came as a huge challenge. “The internet became a new place with its own shape language and color-palette,” production designer Cory Loftis said. “And we looked at it as this infinite, limitless city. There’s constantly new things being built, but the old things never really go away. So we decided that our vision of the internet wouldn’t be just a city — it’s an entire planet with multiple layers like our planets. The really old websites are down at the bottom, and then as you move up towards the surface, the websites are newer and more modern-looking. They all have roots that go down to the original system. And because the internet is quite literally connected with physical cables, we knew that all of the buildings in our world needed to be connected.” 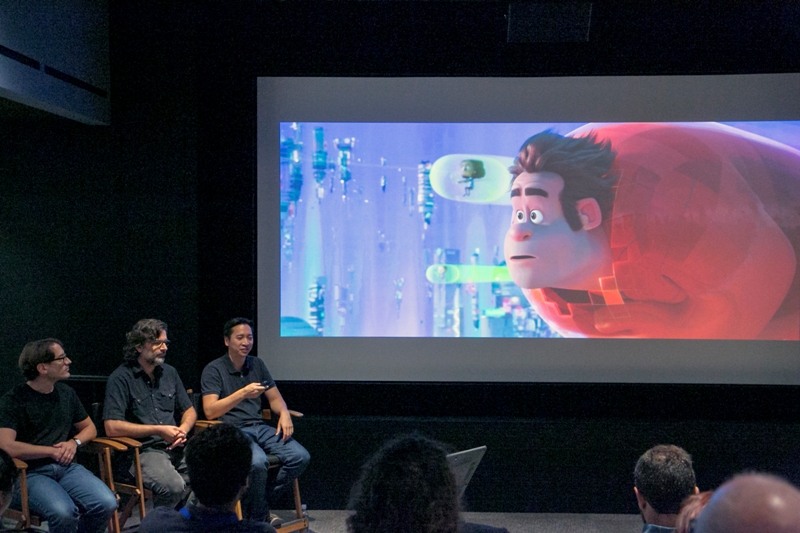 Adds Larry Wu, head of environments, “Each building represents a website — the bigger the building, the bigger the site. And these buildings have floaty parts to them that give them a sense of fluidity: The internet is alive and changing.”

No doubt you have seen the one scene that’s already been released from Ralph Breaks the Internet. Yes, the “Disney Princess” scene! Screenwriter Pamela Ribon had the idea to have Vanellope stumble into the website Oh My Disney and find the princesses, but they weren’t sure they could pull it off. “We knew we’d have to find a balance between making fun of ourselves and celebrating these iconic characters,” says producer Clark Spencer. “Everyone looked at me and said, ‘Do you think we could do it?’ I said, ‘There’s only one thing to do. Write it. Board it. Put it in the screening and one of two things is going to happen: the whole world will laugh and think it’s brilliant and then it’s in the movie, or they won’t find it as funny as we do—but we’ll have put our best foot forward.’ We just wanted to let people experience it in a screening as it was envisioned by the story team. Nobody knew about it outside of the story room until that first screening.” 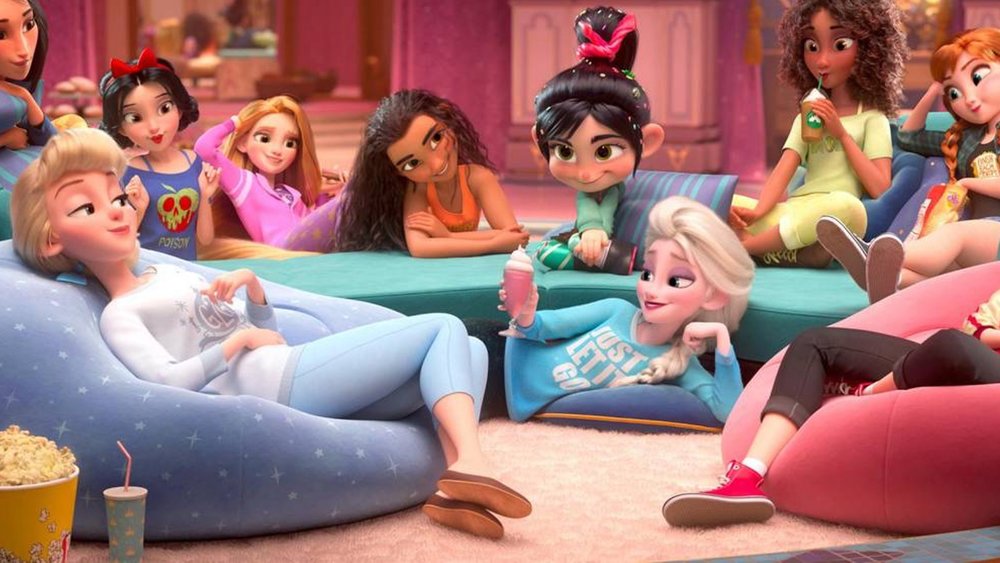 Needless-to-say, the scene was a huge hit during that first screening. “Putting Vanellope in a room with all of the Disney Princesses was funny from the get-go, considering her unapologetic personality and laid back outlook,” says director Phil Johnston.

Ami Thompson, art director—characters, was tasked with coming up with the Princess’ hilarious and clever comfy clothes. “I still can’t believe that I got to design casual clothing for the Disney Princesses,” says Thompson. “We wanted to incorporate modern style that reflects their individual stories—Cinderalla’s t-shirt has a pumpkin carriage with ‘G2G’ for ‘got to go.’ Snow White’s jeans have an apple print. Merida’s tank top has a bear on it and reads ‘Mum.’ Everything is edgy, surprising — we designed band-style shirts, flannels and chopper-style tees.”

And one of the best parts of the scene is the fact that the original princess voices returned for this film, including Auli‘i Cravalho (“Moana”), Kristen Bell (Anna in “Frozen”), Idina Menzel (Elsa in “Frozen”), Kelly MacDonald (Merida in “Brave”), Mandy Moore (Rapunzel in “Tangled”), Anika Noni Rose (Tiana in “The Princess and the Frog”), Ming-Na Wen (“Mulan”), Irene Bedard (“Pocahontas”), Linda Larkin (Jasmine in “Aladdin”), Paige O’Hara (Belle in “Beauty and the Beast”) and Jodi Benson (Ariel in “The Little Mermaid”). “We were able to get just about everyone who’s still with us to reprise their roles,” says Johnston. They even consulted each voice actress on how their character would act in the scene.

Everything I’ve seen from this film so far has been outstanding and I can’t wait to finally view the finished product!