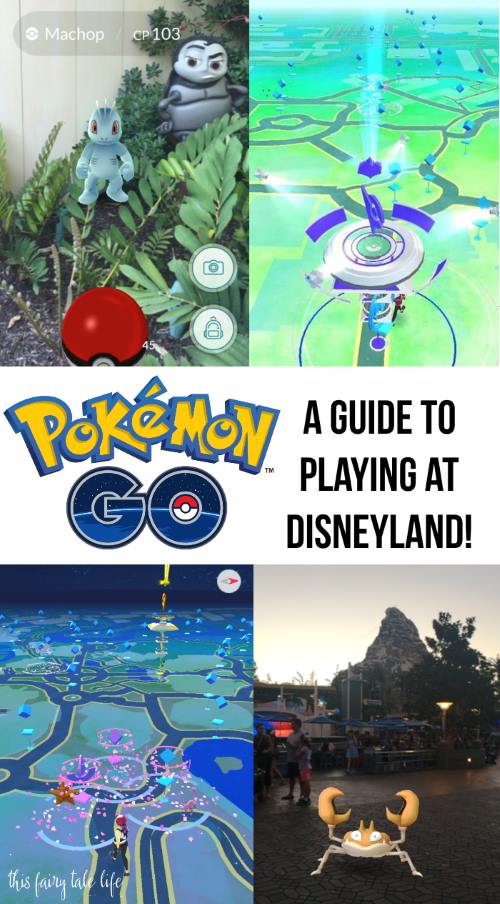 Are you one of the millions of people who are playing Pokemon Go? I was Pokemon crazy in the 90s and have been awaiting this new game app to drop for months. I downloaded it as soon as it was released and have been hooked ever since. The Tsum Tsum app is so 2015, it’s all about Pokemon Go now! Naturally I was curious about what it would be like to play Pokemon Go at Disneyland. It’s a little – okay, TOTALLY – crazy, so I thought I’d put together a quick guide about what you might need to know!

To give you a quick summary, Pokemon Go is an augmented reality game where players need to actually get out into the real world to play. Pokemon Go uses your phone’s GPS and Google Maps to show you a grid of your surroundings. Aside from catching Pokemon, you can go to PokeStops and PokeGyms located at real life landmarks. For example, my closest PokeStop (a place where players can obtain supplies for free) is a fountain outside of a restaurant two blocks from my house. If I want to pick up free supplies, I need to walk there and be standing at that location to do so. At PokeGyms (the closest one to me is at a church four blocks away) players can battle Pokemon to claim “leadership” of that gym.

As far as Pokemon Go activity is concerned, my neighborhood is pretty quiet. But when I go to the downtown area, things are much more lively. There are more Stops, more Gyms, and more Pokemon to catch. I realized when the game was in beta, players could put in requests for certain places to be Stops or Gyms. So the more populated or heavily trafficked areas received a higher number of Pokemon targets. Makes sense. SO THEN I thought about Disneyland! I thought Disneyland must be a hotbed of Pokemon activity, so I got myself there immediately to check it out … and I was right! 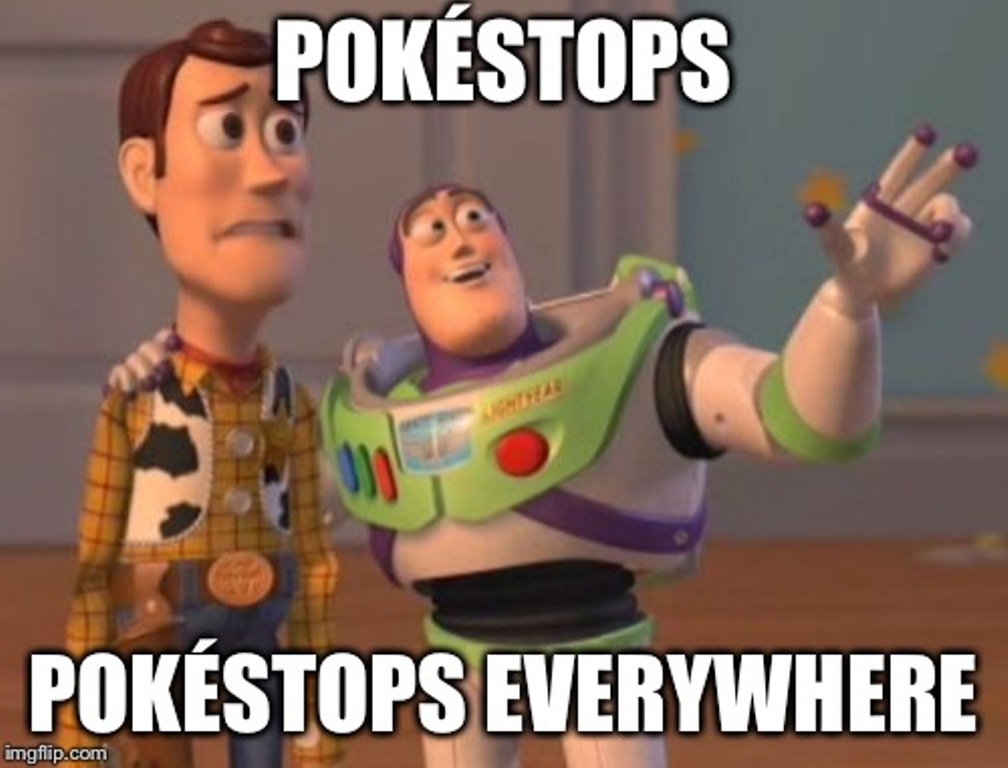 There is so much going on at Disneyland it will make your head spin like a Scyther’s Razor Wind attack. You could easily spend a whole day wandering around the Resort, visiting Stops and Gyms and capturing Pokemon – once they get their server issues fixed, perhaps. I had spotty connection for most of the day until just before dusk, then it was fine the rest of the night. Even still, I visited around 100 PokeStops and caught about three dozen Pokemon (mostly dupes) – not bad for an evening’s work.

I thought I’d put together a little guide about what you may need to know about playing Pokemon Go at Disneyland. This is not a introduction guide to playing the game. If you need one, I suggest this beginners guide from CNET.

A Guide to Playing Pokemon Go at Disneyland

1. There’s plenty of activity in Downtown Disney and the hotels. You don’t need a park ticket to take advantage of Disneyland’s Pokemon abundance. For a while I sat at a bench outside of WonderGround Gallery next to a dad who was feeding his baby in its stroller with one hand and playing Pokemon Go with the other. This is our new normal. Also, don’t be afraid to check the parking lots and structures. There’s a Gym at the tram stop outside of Mickey and Friends, and I caught a Zubat near my car. 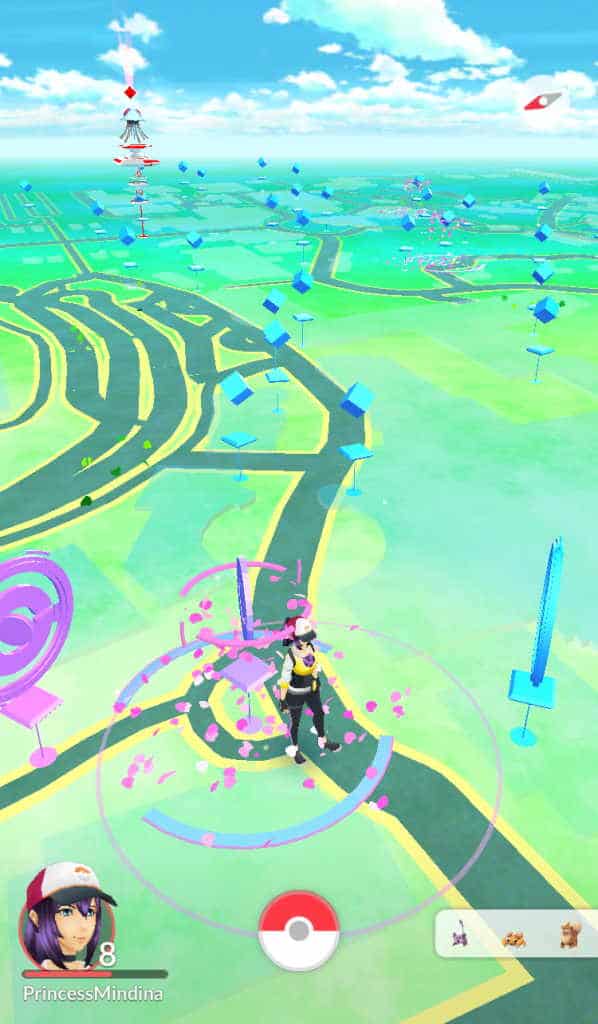 Near Naples at Downtown Disney looking towards the parks.

2. You probably won’t be a Gym leader. Unless you are already a Pokemon Go rockstar, you likely won’t be able to grab the leader spot at prestigious Gyms such as the Sleeping Beauty Castle Gym, which – just 3 days after the game was released – was ruled by a CP 1000+ Arcanine. So … good luck with that. 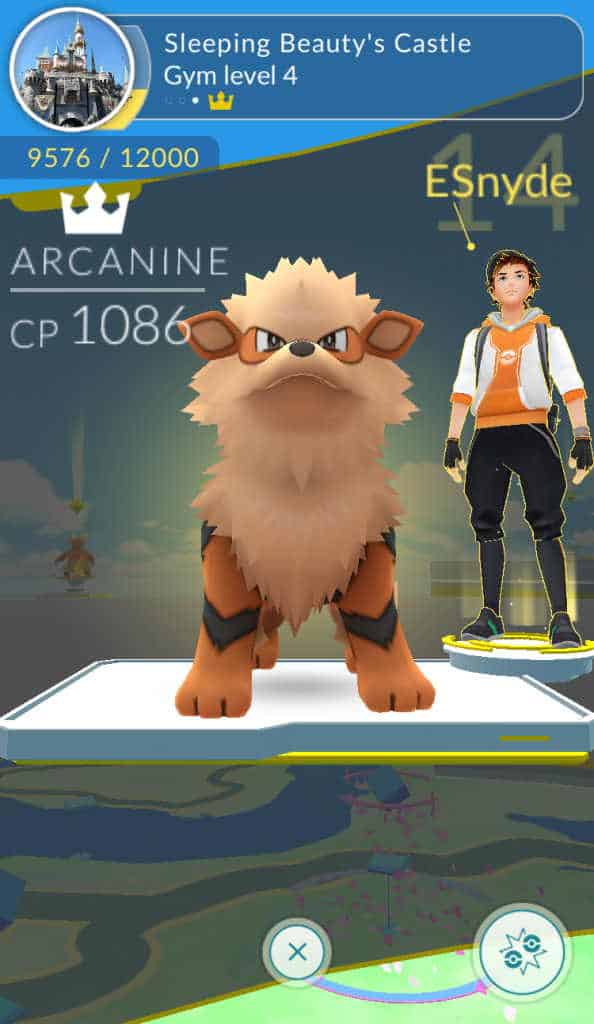 3. For goodness sake, watch where you’re going. Disneyland is a crowded place full of tiny humans and strollers. Please watch where you’re going and DON’T RUN. If you’re catching Pokemon, don’t stop in the middle of a path and block traffic – move over to the side. Don’t walk and throw Pokeballs at the same time – you WILL run into someone. I witnessed a lot of minor collisions and heard about merchandise being damaged in stores due to kids running and looking at their phones instead of watching where they were going. Also, stay alert. The game reminds you at the beginning to watch your surroundings, but with reports of players being robbed or attacked now coming out, the reminder needs to be said. Thankfully Disneyland is one of the safest places in the world but it doesn’t mean we should become so engrossed in our phone game that we disconnect from our surroundings and belongings.

4. And don’t go into restricted areas chasing Pokemon. Rules are still rules, and even if you see the grass moving in a backstage area, you’re not allowed to go there. Respect the Cast Members and Disneyland Security.

5. The CMs know what’s going on. The Cast Members are aware you’re playing and they may make jokes about it. When we got stuck on Big Thunder Mountain Railroad and had to be walked off, a CM told us not to look for Pokemon while we were walking. (By the way – there are lots of backstage PokeStops us regular folk won’t be able to access. Such a tease!)

6. Watch for PokeStops with active lures. Players can set lures (a paid item) at any PokeStop to attract more Pokemon to that spot for 30 minutes. Any players can take advantage of the lure, even if they aren’t the one who set it. There are lures going all over Disneyland at any given moment. At one point I found myself between 3 Stops that all had lures going. Grab a seat and wait for the Pokemon to come to you. You could potentially spend the whole day going from lure to lure. 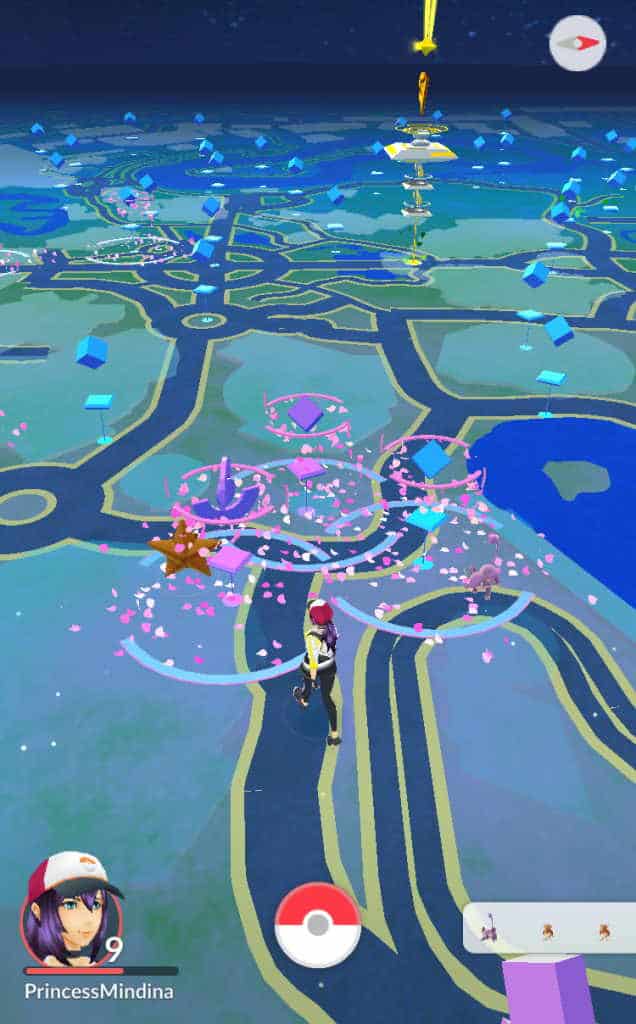 In Tomorrowland, looking towards Sleeping Beauty Castle (marked by the gym)

8. Be sure to bring an external battery pack. There are several different styles available, so find something that’s lightweight and will hold a couple full phone charges. You’ll need it! (Click here to shop battery chargers on Amazon.)

9. I hope you like Pidgeys. Because there are so many Pidgeys. Sooooooo many. 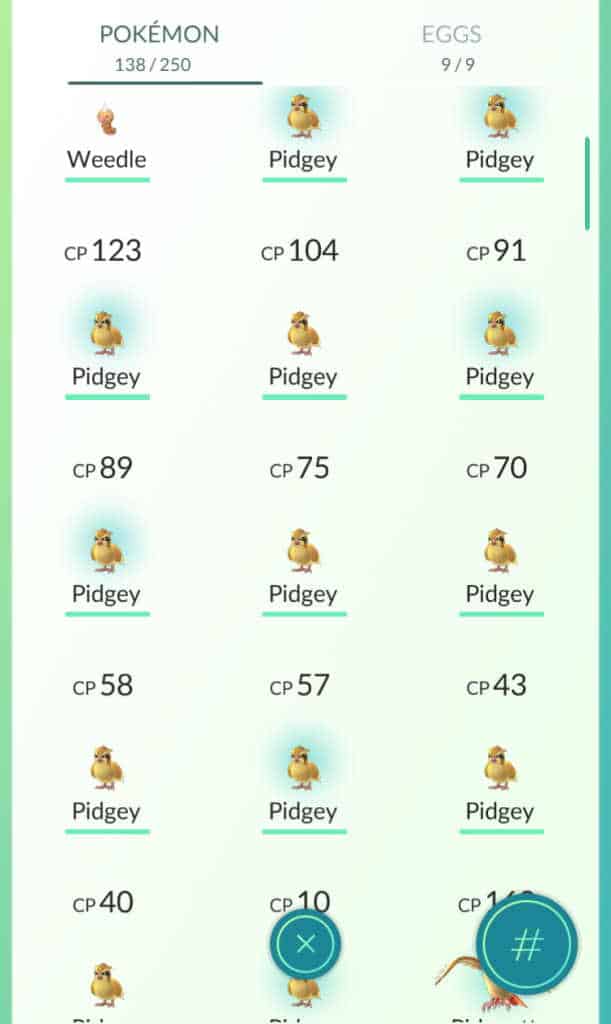 Have any additional tips for playing Pokemon Go at Disneyland? Share them in the comments!