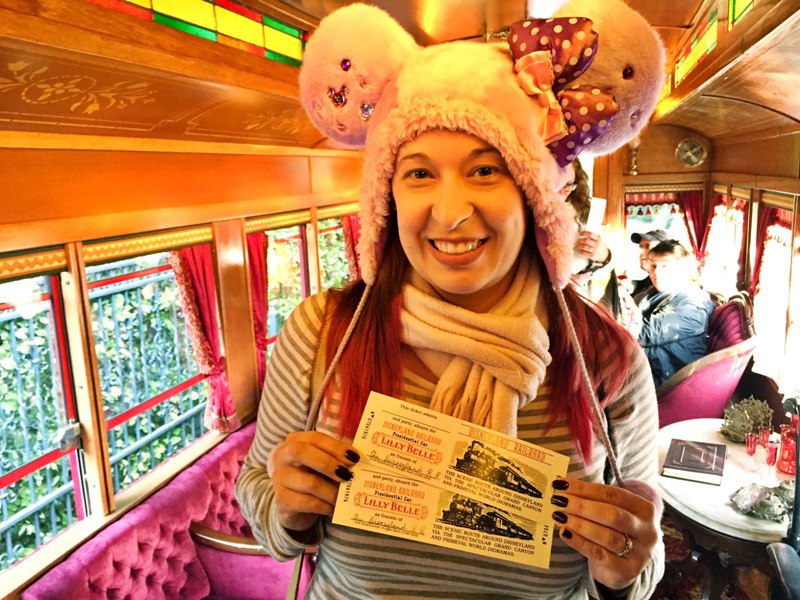 Sometimes, dreams come true when you least expect it.

But first, a little exposition. Are you familiar with the Lilly Belle? The Lilly Belle is a caboose car that sometimes runs on the Disneyland Railroad. The Lilly Belle is special because it was named after Walt’s wife – Lillian Disney. As the story goes, Walt wanted to create a special Presidential train car for celebrities and dignitaries to have somewhere private to enjoy the Disneyland Railroad. However, he passed away before the car could be developed. After Walt’s death, Lillian worked closely with the engineers and designers to create this special car. The Victorian styling and the gold detail is attributed to her, so it seemed only fitting that it bear her name.

Also, even if you see the Lilly Belle is out, it doesn’t mean it’s always taking passengers. My understanding is that they only offer passenger rides on the Lilly Belle once or twice a day, for 14 guests at a time.

Availability is limited and passes usually disappear right at opening. People line up to be the first ones in the park, and the first people waiting at the Main Street train station to try to get passes. I have never lined up before park opening but I have asked about rides on the Lilly Belle at all hours of the day and have been rejected every time. Taking a trip around the park has been a longtime item on my Disney Bucket List with seemingly little hope of it ever happening.

But it did happen! I got to ride on the Lilly Belle! 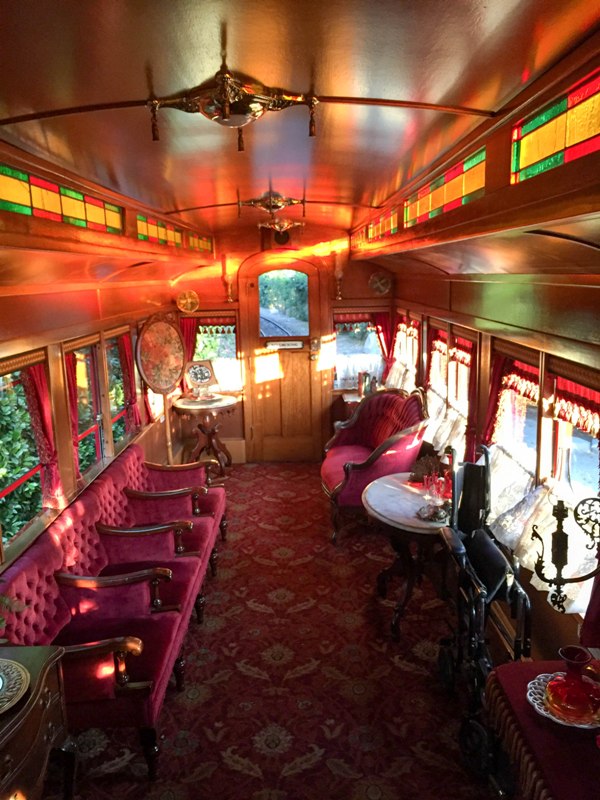 Tim and I were at Disneyland one day last December, waiting in the never ending queue for Hyperspace Mountain. My friend Christi and her husband John also happened to be in the park that day, and I noticed Christi post on Facebook that she had gotten passes to ride on the Lilly Belle that afternoon! I wrote, “Let me know if you happen to have two extra passes!” knowing full well that the likelihood of her getting two passes, let alone four, was nearly impossible.

So imagine my shock when my messenger app dings and a message pops up from Christi – “We actually do have two extra! Let me know if you want them!”

I happily accepted and met up with them at the Main Street train station 30 minutes prior to our designated boarding time. We were given tickets which are now in my scrapbook. 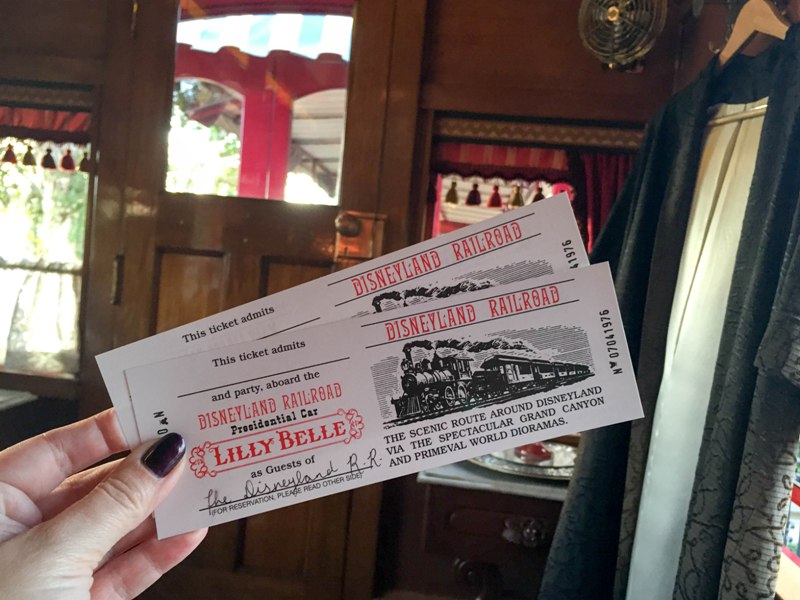 Once the train arrived at the station, all of the Lilly Belle guests were led by an engineer to the caboose. We were shuffled in the car rather quickly, probably because they have learned people will want to take a million photos of themselves outside the train if they don’t. 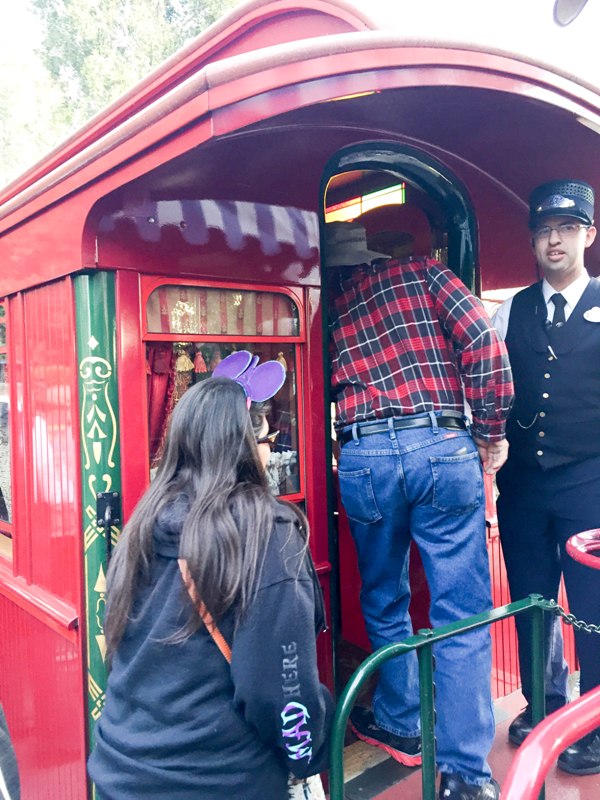 While the train was in motion, our engineer guide spoke about the history of the Lilly Belle and pointed out some of the details in the decor, such as these hidden Mickeys in the carpet – and yes, the carpet is original! It’s certainly worn but is in great shape, all things considered. I’m sure it helps that Disneyland limits the foot traffic inside the Lilly Belle. 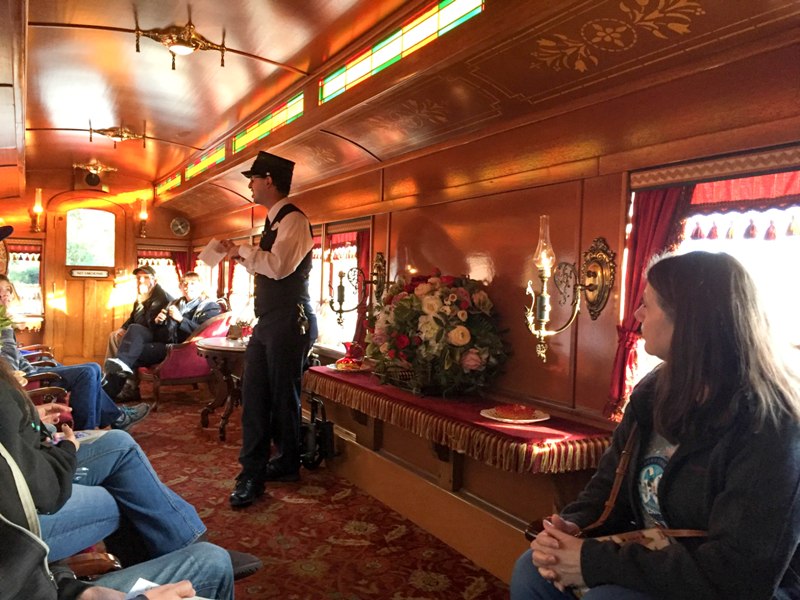 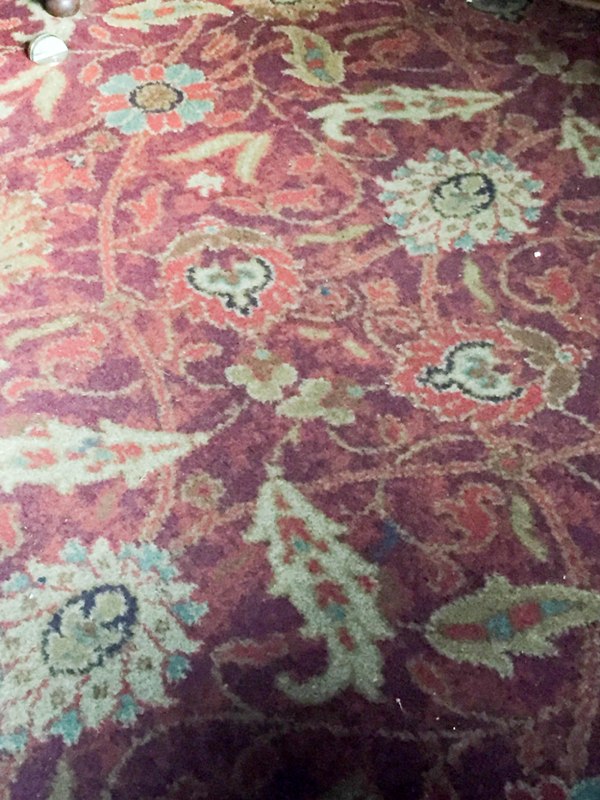 We were instructed to remain seated during the grand circle tour of the Magic Kingdom, but once the train was back at the Main Street station, we were able to walk around and take some pictures. 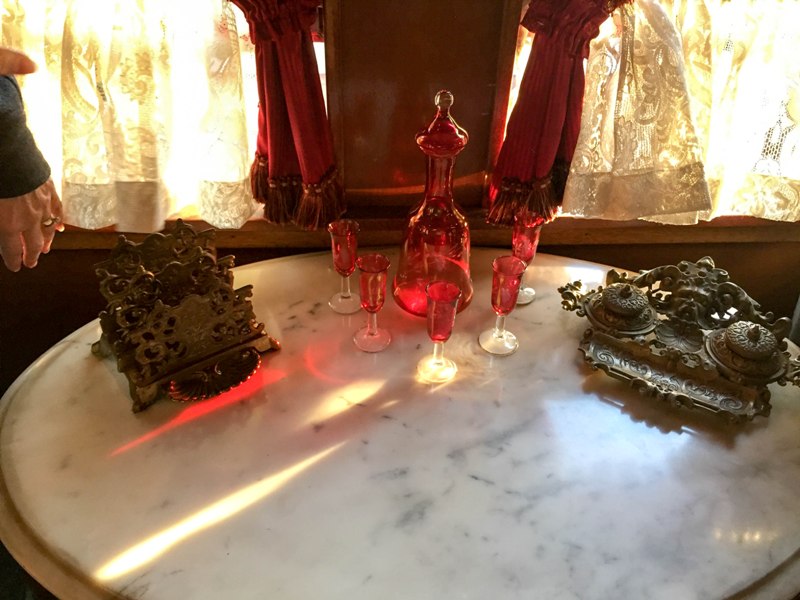 The floral oval shaped piece of furniture is a smoking screen … 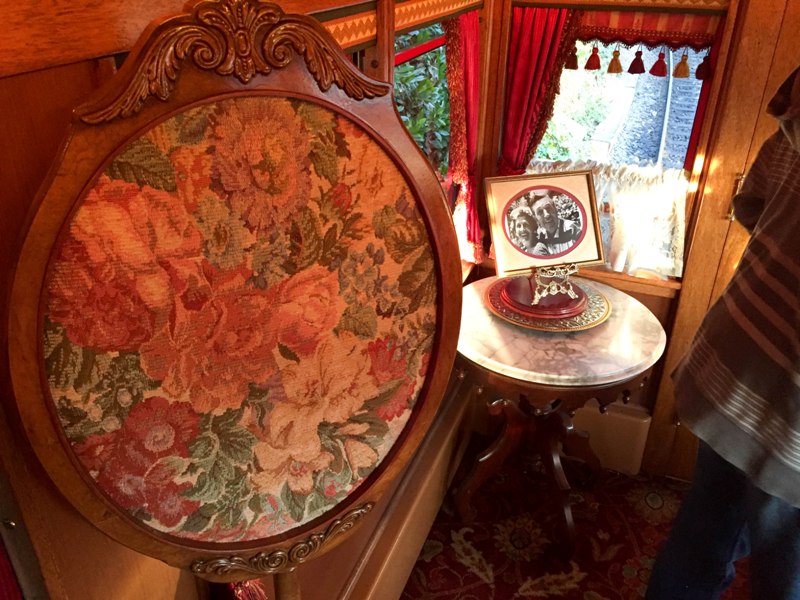 … but I guess at some point they changed the smoking rules! 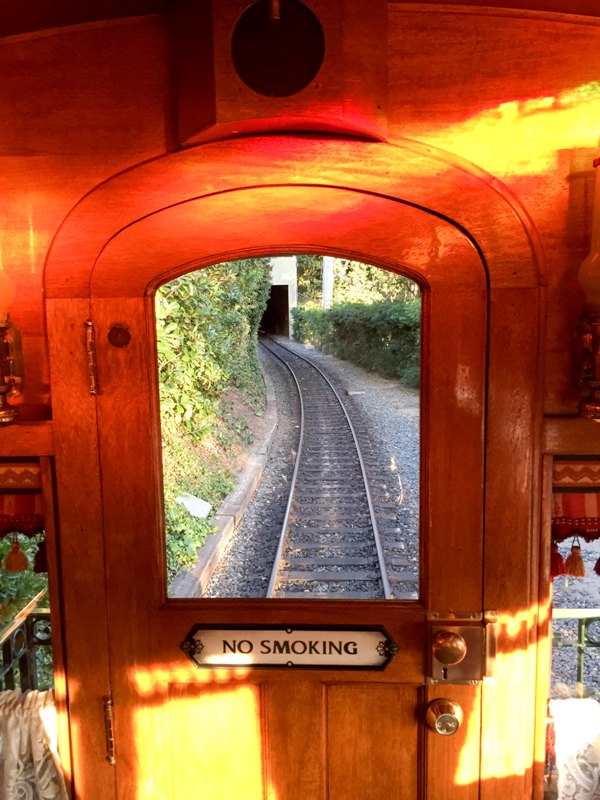 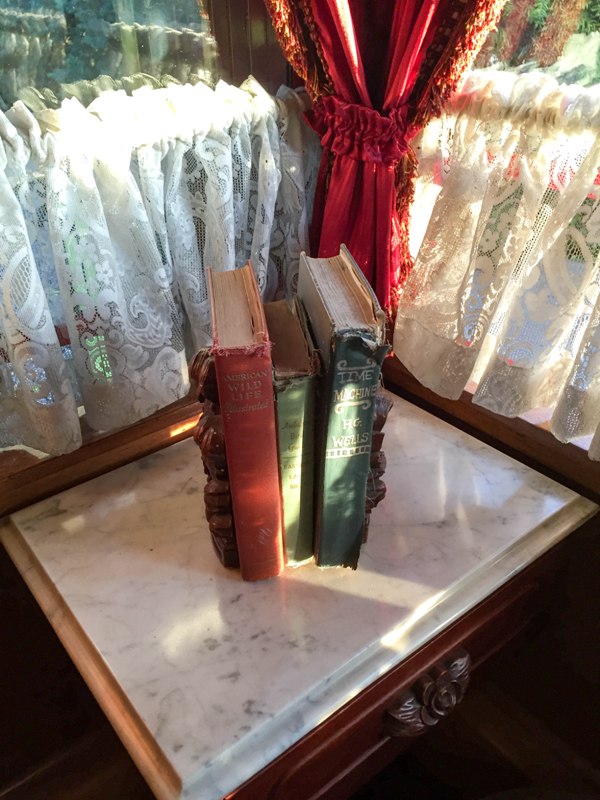 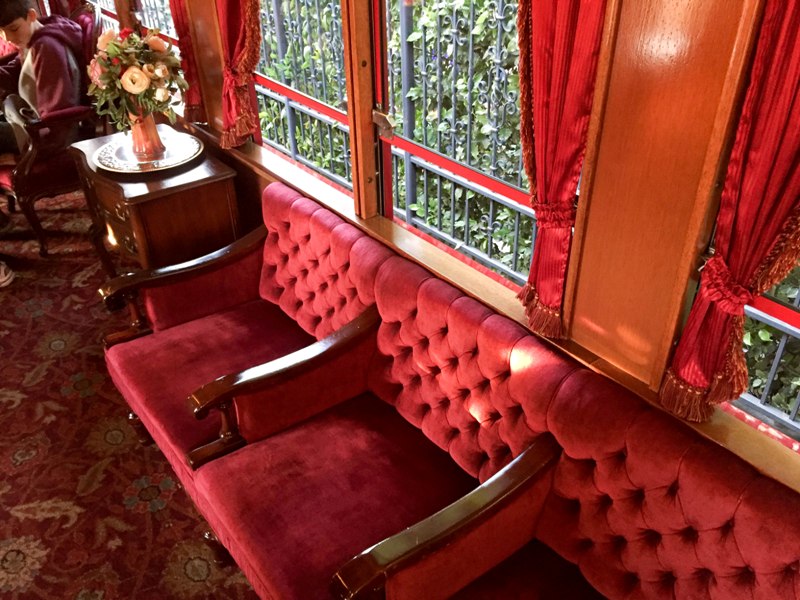 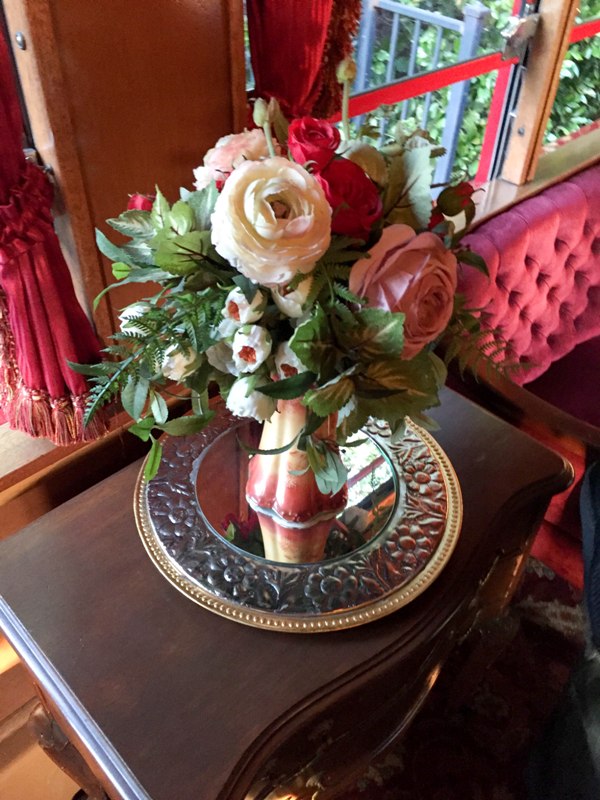 A black and white photo of Walt and Lillian is displayed in the rear left corner of the train car. 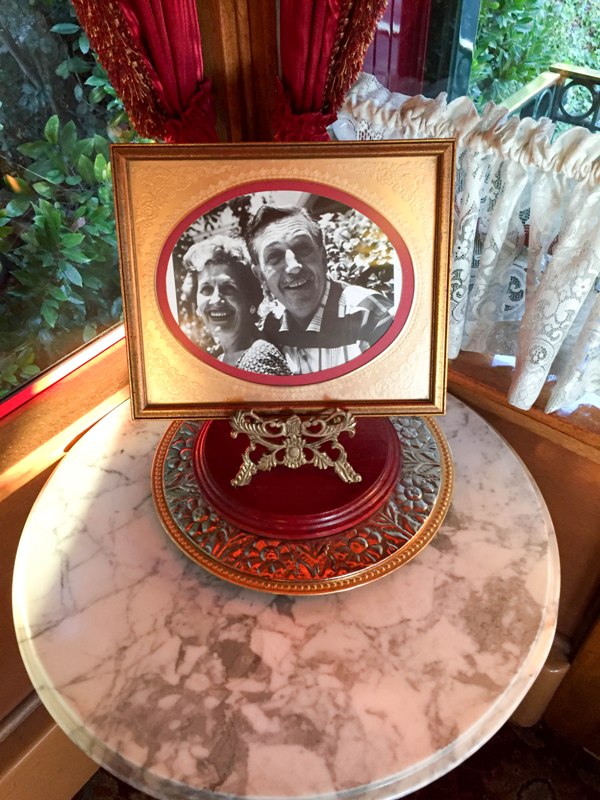 Note the cute tassel detailing on the curtains. I just love the style! 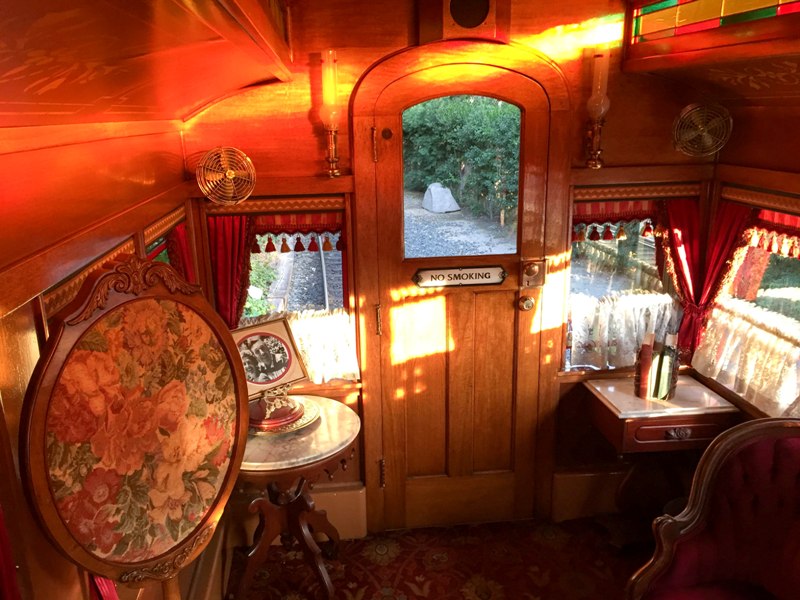 My first trip on the Lilly Belle was a magical experience, and I want to thank my friend Christi once again for providing me with this opportunity! We were a little excited … can you tell? 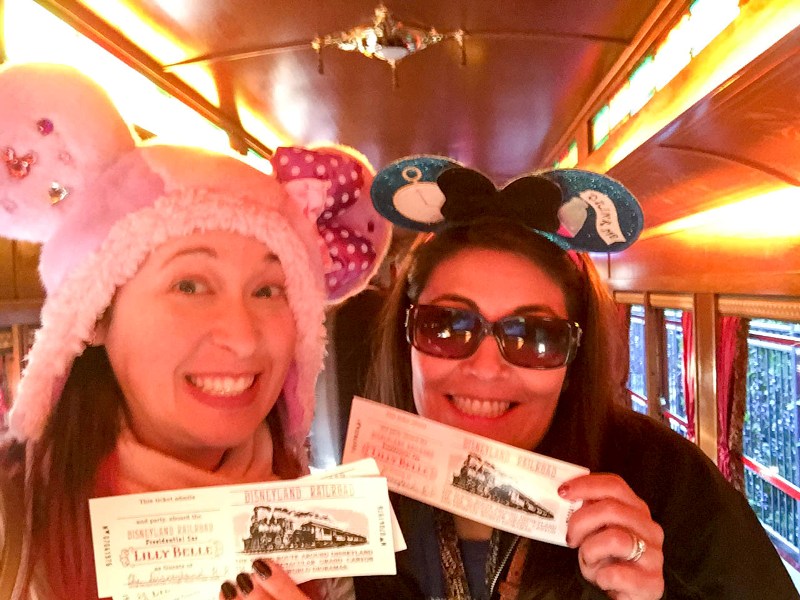 The Disneyland Railroad is closed through at least April 2017 due to Star Wars Land construction. Currently the Lilly Belle is sitting as the caboose with the E.P. Ripley locomotive at Main Street station, so guests can walk around and take a peek inside this beloved and elusive train car.

Have you had a chance to ride on the Lilly Belle?