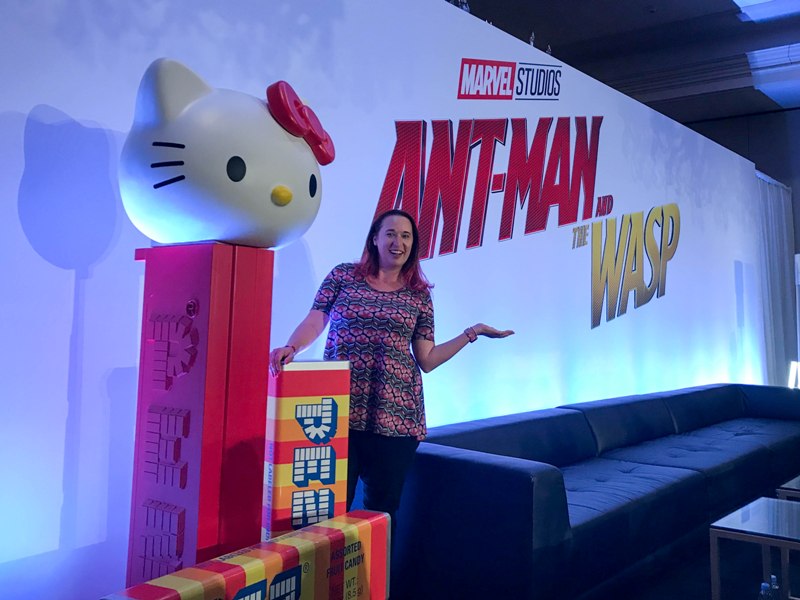 Last week I got to attend a press day for the latest Marvel/Disney movie Ant-Man and the Wasp! It was so awesome to be in the same room as movie legends Michael Douglas and Laurence Fishburne, as well as the ageless Paul Rudd (“Wait …. *I* love Josh!”). True story: Once many many years ago I was standing against the back wall at a stand-up comedy show and I suddenly felt a shadow next to me and I turn to look and it’s PAUL RUDD and I audibly gasped but I’m pretty sure he didn’t hear it. And that’s my Paul Rudd story.

I’ve been excited about Ant-Man and the Wasp not only for Mr. Rudd but because the original Ant-Man was the first Marvel movie I watched, and it’s when I learned they were not just action movies but FUNNY. Like, really funny. Ant-Man is what made me a Marvel fan! My full review will be coming later this week but for now I have some tidbits about the making of the movie directly from the cast and creators of Ant-Man and the Wasp! You can tell this cast has a lot of fun together on set. 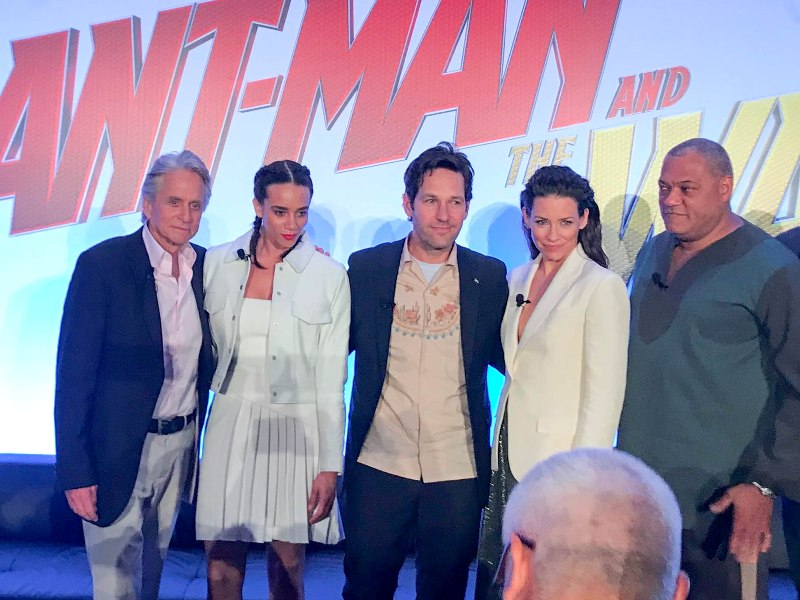 We got to hear from:

WHAT WAS IT LIKE TO BE THE FIRST FEMALE TITULAR CHARACTER IN A MARVEL FILM?

EVANGELINE LILLY: Originally, Wasp was going to be introduced in Captain America: Civil War; that was the original plan. And I never expressed it at the time, because of course, how can you? But secretly I was like … She’s not going to get an origin film. Oh well, you know, it’s okay; I’m just stoked to be here, dude. Like I’m just happy that I get to put on a suit. And then when I got a call saying we’ve decided not to put you in Civil War — and there was this moment, I could tell where the feeling in the room was like… Are they going to say what I think they’re going to say? And then they said what I thought they were going to say, which is because we really want to dedicate a film to introducing this female superhero and we don’t want her just to be a side note in this larger story. And that was so exciting for me. And then I still didn’t know that there was going to be double billing. That didn’t come till later and that was presented to me as a surprise, by email with a screen cap of the title and so that was pretty cool.

KEVIN FEIGE: And it was without question, in that tag of, what ended up being the tag on the first Ant-Man film was in there from the beginning, which is her finding that suit and saying “It’s about damn time,” so we always knew that the next one was going to be Ant-Man and the Wasp. And that it would finally be time to see her suit up and be, and be the hero she was born to. 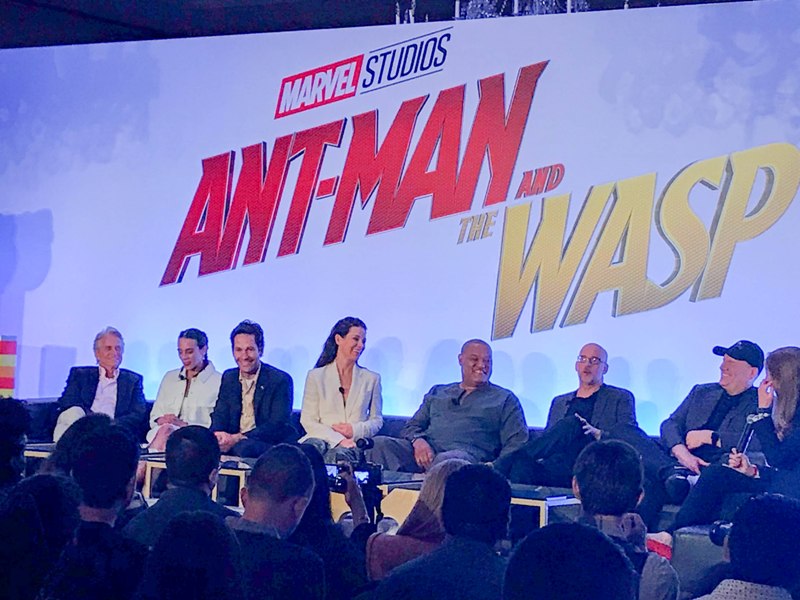 WHAT IS THE SCIENCE BEHIND THE QUANTUM REALM?

EVANGELINE LILLY: I really love quantum physics and always did before this happened and that’s one of the reasons I was excited about this brand, was I really dig quantum physics and you know, at one point we thought the atom was the beyond all and end all; that everything ended at the atom. That was the smallest nucleus in the world. But actually we discovered that the atom is kinetic. And that atoms exist in multiple places at the same time. And that was scientifically proven and once you discover that, then you know that matter is kinetic and matter is displacing all the time and if it can be displaced, it can be warped. And so … so if you can warp it then you can warp size, you can warp matter and also, can you warp time? Can you warp reality? Can you warp universes?

MICHAEL DOUGLAS: I know we get very, very small.

WHAT WAS IT LIKE FOR PAUL RUDD TO STAR IN AND WRITE THE MOVIE?

PAUL RUDD: I try and think of the film as a whole and it’s nice to — and I think of every character — but I will say this. This has been a collaborative effort more than anything I’ve ever worked on and to think that I actually wrote it would be, I think, a gross overstatement. The truth of the matter is Peyton was in the room, has been working on this for a long time. Same with our producer, Stephen Broussard. Same with Kevin. But in particular, two writers, Erik Sommers and Chris McKenna, who did really, I mean, a lot of the heavy lifting and those guys are great. I would, I tip my cap to them.

WHAT WAS THE BIGGEST CHALLENGE IN FILMING ANT-MAN AND THE WASP?

PEYTON REED: There were a lot of daunting sequences, because we really wanted to set out and go nuts with the PYM-PARTICLE technology in this movie and — and it occurred to us at some point, well, maybe it’s not just Ant-man and Wasp who can shrink and grow. What if it were vehicles, buildings and other things and we really wanted to go nuts with it. But what that did was create some real technical challenges. So I think maybe the biggest is, we did a whole car chase that took us through the city of San Francisco and we wanted to do a chase that, you just simply wouldn’t see in any other movie because of all the size changes. We wanted to do all these very specific things and make San Francisco a character in the movie, but utilize the city and make this chase specific to that city. So the landmarks, things like Lombard Street. But then we, it occurred to us, oh, we might not be allowed to do that. But thankfully the city of San Francisco was so cooperative and we really had free range to do some of the craziest things imaginable in that city. So that was probably the biggest challenge.

WHAT WAS IT LIKE TO PLAY GHOST, WHO IS TECHNICALLY A VILLAIN?

HANNAH JOHN-KAMEN: I definitely approach the character, not as a villain, at all. Definitely a threat to the characters and the heroes of the movie. But when … I guess when you play a villain, you have to play it like you’re the good guy and everyone else is bad. So everyone else is the bad guy, and you’re the good guy. And she, I mean, the stakes are so high, she has such a clear objective in the movie and you know, every woman for herself. I think with the villains, I mean, I mean what Marvel Universe does so well is, is it’s not black and white. It’s very gray, you know, and I think the villains are very redeemable and they’re fun and you want to see them again.

EVANGELINE LILLY: I have a seven-year-old son and he loves violent movies. And he always, when he talks about good guys and bad guys in movies, I always feel a responsibility to clarify for him — honey you know that there really is no such thing as a bad guy. Right? They’re only just good guys, who have made so many bad choices, they’ve forgotten how to make good choices. And a true hero’s job is to remind them of their goodness. Not to annihilate them, to kill them. You know, it’s to help them redeem themselves. And I think that’s applicable to life. Superhero stories are fun and they’re a totally different world, but what I think is cool, to have redeemable villains, you’re teaching children that if you encounter somebody that might have a different opinion than you, that doesn’t mean they’re a villain. If they have a different objective than you, it doesn’t mean you should attack them. Maybe you want to try to understand them first. 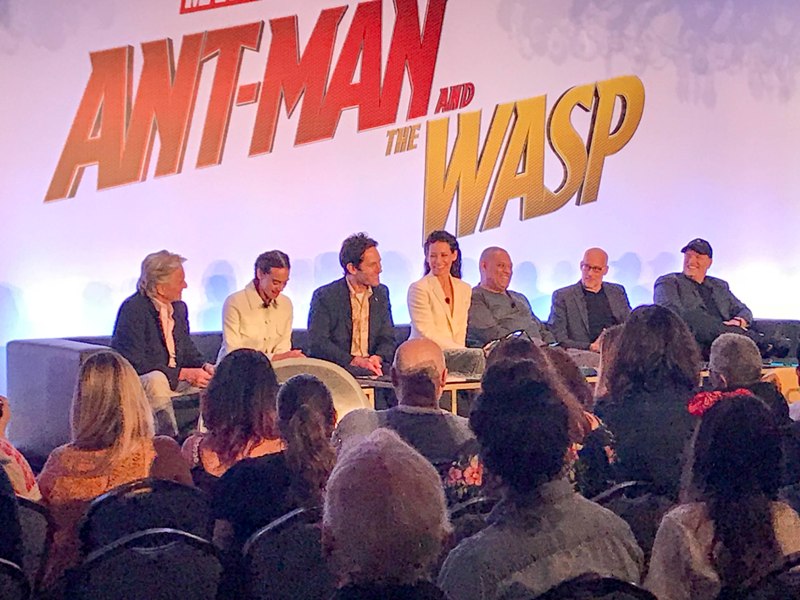 HOW DID LAURENCE FISHBURNE GET INVOLVED WITH THE MOVIE?

LAURENCE FISHBURNE: It is not the first Marvel role to come my way. In fact, years and years ago I ran into a guy named Tim Story who directed the movie Fantastic Four: Rise of the Silver Surfer and I said to him, “I am Norrin Radd,” and he said, “Who?” and I said, “I am Norrin Radd and Norrin Radd is the guy who becomes the Silver Surfer and works for Galactus,” and all that stuff. So I voiced the Silver Surfer, Rise of the Silver Surfer and then I’ve been a reader since I was eight and a fan, you know, my whole life and really enjoyed the movies and everything that they’ve done with MCU has been fantastic, because what they’ve done is brilliantly braid the source material with, and bring it on into the now, and so it’s amazing. Although I was a Marvel reader and a D.C. reader, but mostly Marvel — I did not know about Bill Foster. I knew about Hank Pym, because I think, and you’ll tell me if I’m right or wrong, but Ant-Man and Wasp became Avengers at some point. Did they not? So that’s why I knew about Hank Pym and I knew about the Pym particle and all of that, but I never got to Foster because I was never an Ant-Man reader. So they were kind enough to allow me to join the family and I’m just, I’m a kid in a candy store, man. Just having a good time. Yeah.

ON BEING A RELATABLE SUPERHERO

PAUL RUDD: It’s true, this theme of, you know, parents and children run throughout the film. Fathers and daughters. And it’s something that’s relatable because whether or not we have children of our own, many people do, we all have parents. And the idea that I’m playing somebody that doesn’t have innate super abilities is a way in. I want it to be relatable. I can relate to the character that way. Certainly when I’m thinking about it and we’re talking about story and script and everything; that’s the approach. I have a daughter roughly the age of Cassie in the film; she’s a little bit younger. I know what it’s like to spend the evening playing with Barbie dolls and I know, like it’s just, it’s … That’s the glue. That’s the soul of it. And the love that a family shares and how we need each other. You know, parents need their kids; kids need their parents. And if we could somehow build a very funny movie, one that appeals to all ages that families and kids could see but that actually still has all of the elements that it fits in the Marvel Universe and all ages are going to be wowed by certain aspects of it — that idea that I can identify myself in that, in that role was huge. 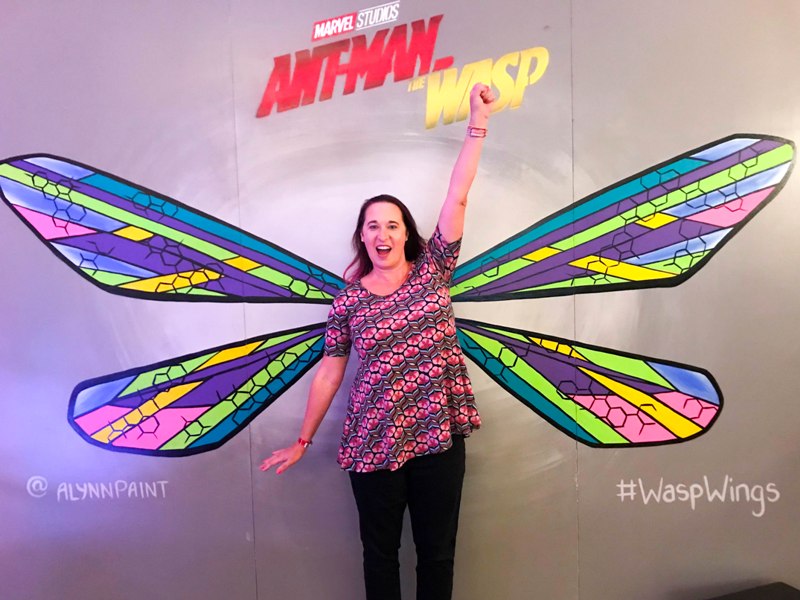