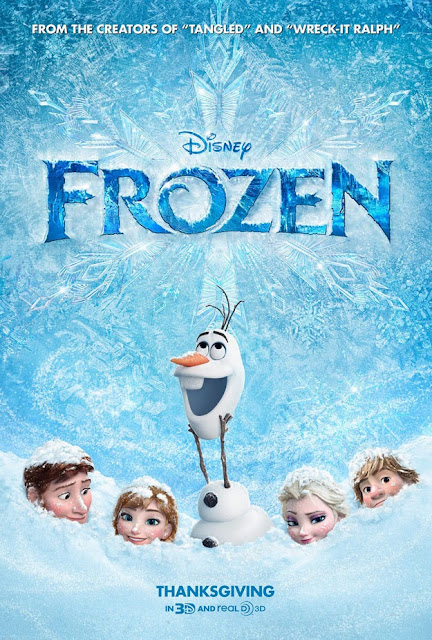 Last weekend I was invited to a media preview of the new Disney animated feature, Frozen.  I’ve never done a movie review, and to be honest I don’t think I’m very good at writing these kinds of things.  I have a lot of thoughts about movies and TV shows but I often find it difficult to put them into words.  But a couple people have asked me what I thought of Frozen, so here it goes (warning – very minor spoilers ahead).

As the title of this post suggests, Frozen wasn’t my favorite.  But I love it anyway.  The look and feel reminded me a lot of Tangled, which in my opinion was perfect.  But this isn’t to say Frozen is a bad movie.  It’s very good.  But, my standards for Disney animation is so incredibly high, perhaps to an unfair degree, and Frozen just didn’t reach it. 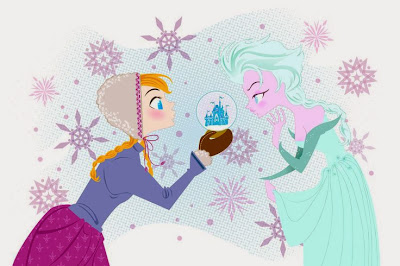 I went into the showing with no awareness of The Snow Queen fairy tale by Hans Christian Anderson.  But here’s a little synopsis if you want to read up (no spoilers):

After the kingdom of Arendelle is cast into eternal winter by the powerful Snow Queen Elsa (voice of Idina Menzel), her sprightly sister Anna (Kristen Bell) teams up with a rough-hewn mountaineer named Kristoff (Jonathan Groff) and his trusty reindeer Sven to break the icy spell. (taken from Fandango)

And boy, does it take a while to get there.  The plot exposition at the beginning feels like it goes on forever, further lengthened by the song “Do You Want to Build a Snowman?” which felt like it was at least 20 minutes long, but according to the soundtrack listing it’s only 3 minutes and 27 seconds (and strangely enough, as much as I rolled my eyes at it, it’s the only song from the movie I’m constantly humming).  The plot of Finding Nemo and Up unfolded in less time and in a more graceful manner.  But the good news is, once you get into the heart of the movie, the plot stays solid.  In related news, did you guys know Kristen Bell can sing?  Like, really well?  I was watching the credits waiting for Anna’s Singing Voice and it never showed up.  I mean, to go head-to-head with Idina Menzel is really impressive. 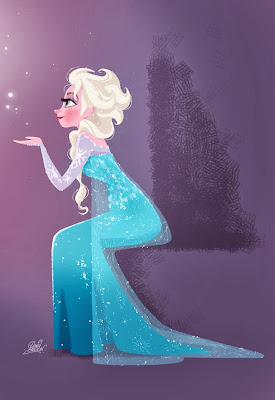 “Elsa” by Princekido on Deviant Art
Speaking of Ms. Menzel, you’ve been hearing a lot about the showstopper number “Let It Go,” and there’s a good reason why.  The song is powerful, Menzel’s voice is perfection, and the animation as we witness Elsa finally embracing her icy powers is breathtaking.  And perhaps the song came to me at a good time in life, where I’m tying to “let it go” – “it” being my old career, my old ideas of what type of worker I need to be, and embracing my creativity which has been stifled for too long.  If Brave was my power movie for 2013, then “Let It Go” is my power song for 2014.  The scene was the highlight of the movie for me, and it looks stunning in 3D, a format I usually try to avoid but was done really well for Frozen.
As amazing as “Let It Go” is, its polar opposite is “Fixer Upper,” a completely grating song sung by pointless trolls that adds nothing to the plot and should have been left as a DVD extra.  Could you tell I hated it?  Did you catch my polar pun?  Polar, frozen … yeah, I’m sure you caught it.
The teasers REALLY focus on Olaf, who provides the main comic relief of the movie and does it well.  For as much as it sounds like I hate everything, his one song “In Summer” is actually quite adorable and silly (in a good way).  But don’t expect to see much of him, as the plot really is about the relationship between Elsa and Anna, which may be less than interesting for the under 12 male children in your life (but I admittedly know absolutely nothing about what children are into, so who knows). 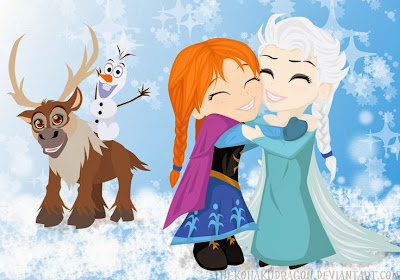 “Frozen” by TheKohakuDragon on Deviant Art
Ultimately, Frozen is what you expect from a Disney movie … action, humor, adventure, conflict, a plot twist that I totally did not see coming (the lady behind me literally and organically yelled out “NO!”), a happy ending, and stunning animation.  This one just felt a little thrown together, a little unpolished to me.  Will I still Disneybound as Anna and/or Elsa and search for a Sven the Reindeer plushie to join Pasqual and Little Brother in my sidekicks plushie collection?  Yessssssss. Will I buy the soundtrack and watch the movie on repeat when it comes out on DVD?  Yesssssssssssssss.  But I will skip over “Fixer Upper” every time.
And I don’t want to end this review without mentioning perhaps the best part of the movie for me, which was the short that ran before it, called Get A Horse.  There are some clips and explanations out there but I don’t want to spoil anything for you.  I’ll just recommend you watch it at a 3D showing to get the full effect and remember to read the voice credits carefully for a warm fuzzy feeling.
1 Shares
Tweet
Share
Pin1
Share