After the downer that was my Camp Mighty recap, I thought I’d better hurry up and share the highlight of the entire trip, which is the saga of my interactions with one of my blogging heroes, Jenny Lawson – aka The Bloggess.  If you aren’t familiar with Jenny’s writing, you need to be.  Not only is she sharply witty but she’s one of the most open and honest bloggers out there.  I admire her for being open about her anxiety disorder and her struggle with self harming, because I struggle with these things, too.  And I know that by being in her position, and showing that you can have these issues and still be a success, she has made an impact on several people’s lives, and surely has even saved some lives.  I just downright admire her.  I blew through her book Let’s Pretend This Never Happened in two nights.  I basically want to be as cool as Jenny Lawson when I grow up.

When I found out Jenny was going to be a speaker at Camp Mighty, I felt a mixture of excitement and nervousness. This might be my chance to meet one of my blogging idols.  But what would I say to her?  “Thank you” sounds stupid. “I think you’re super rad” sounds equally dumb.  Who am I kidding?  I know I’m too shy to even approach her.

Camp Mighty officially kicked off with a Welcome Dinner on Thursday night, complete with an ice breaker bingo game and a very generous hosted wine bar.  After running around with my bingo card and making *ahem* several trips to the bar for Chardonnay refills, I suddenly needed to take my sweaty self to the restroom.  I entered the lobby and turned the corner into the hallway, and there, right in front of me, was my blogging hero.  Please add “YOU’RE JENNY LAWSON!” to the list of idiotic things to say to your heroes, which is what I totally said.  Followed by, “Can I hug you?”  Ugh, really Mindy?  But of course, Jenny is the greatest and she said “of course” and she gave me a hug.  And it was awesome.  And in my mind, Camp Mighty was already a success.

The sober reality of the next day made me too shy to approach her and apologize for my weirdness the night before, and despite seeing her be approached by several other campers and her being totally friendly and nice, I just couldn’t do it.

(That night, at the Space dance party, I ended up leaving the party early because I had an anxiety attack.  I’ll do a whole post on this later but just keep this in the back of your mind because it’s important to this story.)

The following day (Saturday now), Jenny’s panel kicked off the activities for the day.  Her panel was, of course, hilarious, heartwarming, inspiring, and I’ll just say hilarious again.  She talked about taking criticism – “If no one is judging you, you’re probably not doing anything.”  Success and failure – “It doesn’t make you a failure just because you failed at one thing.” Making decisions – “Always do something stupid. Stupid is always fun.”  And coping with difficult tasks – When she was nervous about recording her book on tape, Neil Gaiman’s advice to her was “Pretend you’re good at it,” which I’m pretty sure I’m about to get tattooed on my body somewhere.  Also, I can’t remember exactly what was discussed, but I remember Jenny saying something about having anxiety the day before, and I remember thinking I wanted to tell her that I had problems with anxiety, too.  And maybe we could both feel less alone about it. 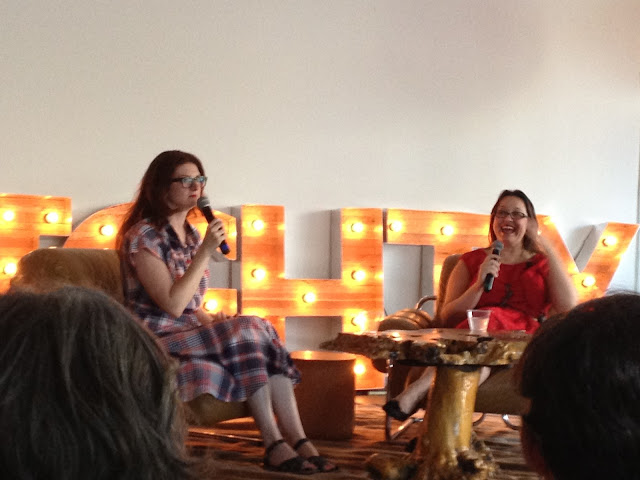 {Jenny (on the right) during her panel, saying funny and smart things and showing off her see-through hand.  Moderator Maggie is clearly envious.}

After her panel was over, I went outside to try to get my book signed and tell her about my anxiety but she was gone.  In fact, I didn’t see her the rest of the day, and when she wasn’t at the Farewell dinner that evening, I assumed she had gone back home. The disappointment that I had blown my chance to properly talk to her hit me pretty hard.  Darn my shyness.  Darn my social anxiety.  I felt like a failure.

After waking up Sunday morning, my roommate was telling me her events of the morning and casually mentioned that she saw Jenny in the hotel cafe.  Oh!  She’s still around!  But what are the odds of running into her, especially with the luck I’d been having all weekend.  Slim.

I quickly showered and got ready to go settle our hotel bill with my two roommates.  After I was done paying my share, I was waiting in the lobby for my roomie to get her credit card back, when I see Jenny Lawson walk across the lobby and out the front door.  I immediately began an internal debate with myself:  Should I run after her?  No, she probably doesn’t want to be bothered.  And you already made a fool of yourself that first night.  But remember the anxiety stuff you wanted to tell her about? She probably doesn’t care.  She probably hears stuff like that all the time.  But this might be your one and only chance to talk to her!  And why did you come to Camp Mighty in the first place?  To get inspired to take some risks, right?  Eff it, I’m running after her.

So I did, without even telling my poor roomie where I was going, because I knew if I said it outloud I would begin to doubt myself again.

I ran after her through the walkways of the hotel, yelling her name until she stopped to turn around.  In my shaky voice I said, “Hi, my name is Mindy and I just wanted to say thank you for your presentation yesterday, it was really funny and touching, and I have anxiety too, and I spent half the space party crying in my hotel room.”  She looked and me and smiled and said, “Me, too.”  She explained she got overwhelmed and that’s why she wasn’t around much on Saturday.  I told her I could relate.  She told me I’m not a failure and I told her I really needed to hear that and I wanted to thank her because she makes me feel like I’m not alone.  Then she said, “Thank you, you just made my morning.”  I’ll never, ever forget when Jenny Lawson told me I made her morning.  Then we hugged and I apologized for my wet hair and she said it was okay, and then I said goodbye and floated away.

As I was floating back down, I realized I should have asked to take a picture with her.  D’oh!  But it’s okay, I’ll forever have this memory.

I made my way back towards the lobby as my roomie was coming out.  I apologized for abandoning her and told her why I did, and she said she totally understood.  Then I told her all about my talk with Jenny, my voice still shaky from nervousness and excitement.  I was on Cloud 9.  All the difficulties and disappointments of the previous two days had suddenly melted away and Camp Mighty was now 110% worth it.

About an hour later, my roomie and I were back in the lobby, storing our luggage while we went to get breakfast.  As we were headed out, there Jenny was, seemingly waiting for transportation to the airport with some other people.  The universe put her in front of me again, so I seized it.  I approached her again (“Hi, it’s me, that annoying girl who keeps bothering you”) and asked if I could take a picture with her.  Of course she said yes, because she is amazing and kind.

My roomie told us both to say “Yay Mighty!” 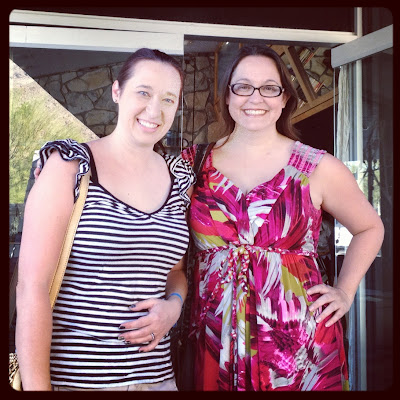 Then my roomie said, “On second thought, maybe ‘Yay Xanax!’ would be more appropriate?”  We both agreed and perked right up. 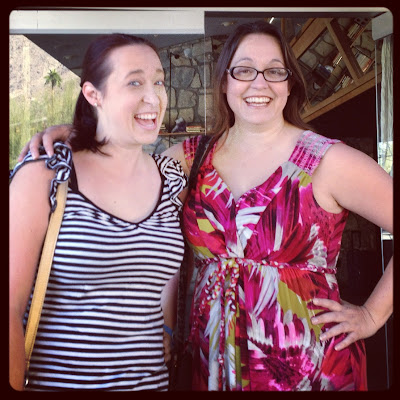 So the moral of this story?  Always do something stupid.  Stupid is always fun.  And Jenny Lawson is the greatest.

(She’ll never read this, but thank you Jenny for being so incredibly nice to me.  I’ll never forget it.)