(All photos by Shari Photography.) 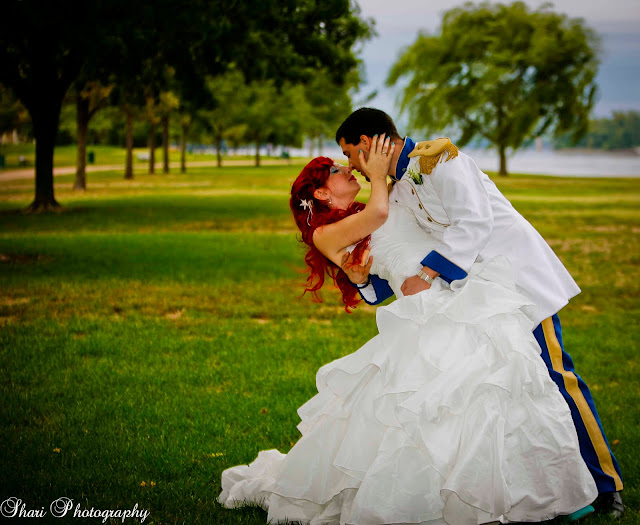 So let’s just get into Part Two!  Take it away, Jamie! 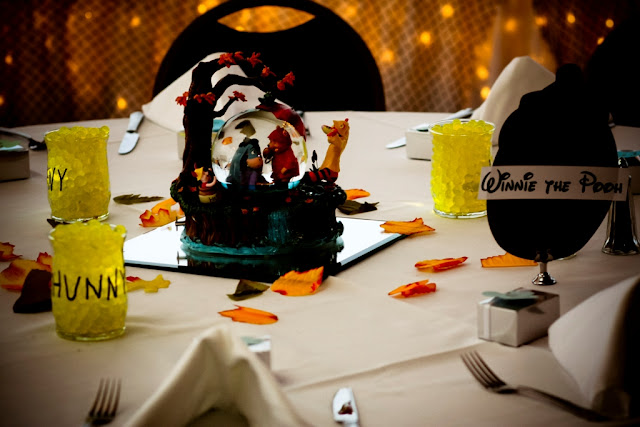 Table #11: Winnie the Pooh. This table was special as well, and it was the one we chose to sit Christopher’s parents at. The Silly Old Bear was a large part of Christopher’s childhood. His mother-son dance was “Return to Pooh Corner” by Kenny Loggins, if that tells you anything, haha! They are all about the Pooh Bear. We borrowed one of my Mom’s (who is also all about the Pooh Bear) snow globes which depicts “The Blustery Day.” We sat it on a mirror to represent the water, and then we scattered leaves around the table. For the lighting, we used the Aquagems again, only this time we used yellow ones to make them look like honey pots. With a paint pen, my mom wrote the word “Hunny” on all of them, essentially creating cute little Hunny Pots with lights inside of them. 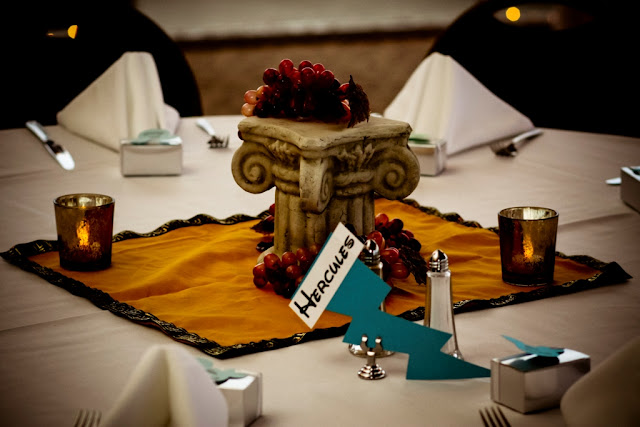 Table #12: Hercules. We kept the Hercules centerpiece simple. I serged a piece of gold fabric and added some Greek-inspired ribbon around the edge. We put LED candles in some pretty gold crackle votives. On top of the fabric we put a Greek looking column, which we surrounded with bunches of grapes. We wanted it to have a very Greek feel. The table marker was a lightning bolt. 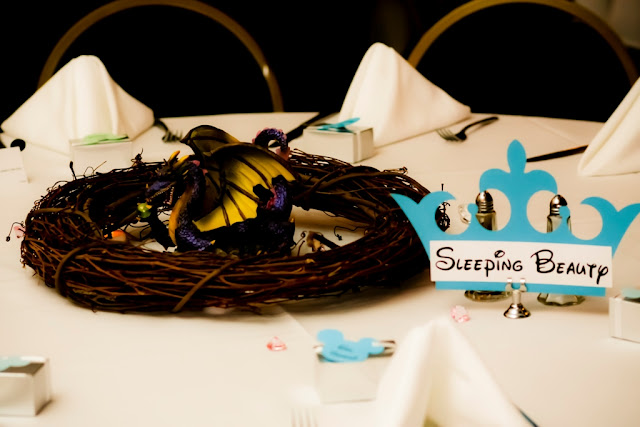 Table #13: Sleeping Beauty. We couldn’t really think of a good way to represent Princess Aurora other than a spinning wheel, and there was no way we were going to get one of those to fit on the table! We chose instead to take our inspiration from Maleficent for this table. We had a purple dragon in the center (which we borrowed from a friend), surrounded by brambles (like the ones Maleficent uses to try to keep Prince Philip from reaching Aurora to awaken her). We put LED candles inside the brambles to give them the appearance of being on fire. We added some pink jewels for scatter, just to keep a touch of the “princess” feel. 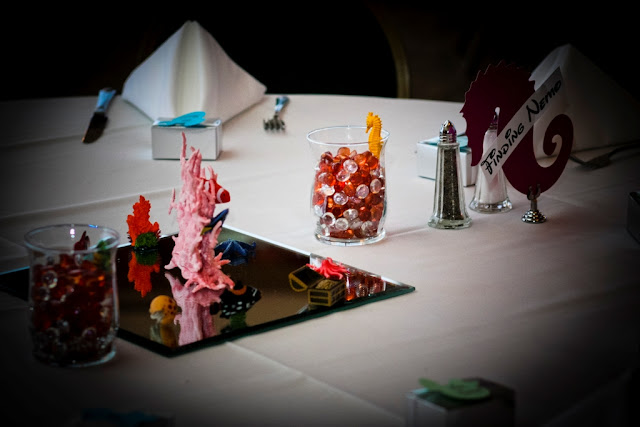 Table #14: Finding Nemo. For this one we used a square mirror as the base (to give it a “watery” feel) and placed some coral in the middle. We surrounded the coral with items from the ocean … including a miniature Dory and Nemo. We took inspiration from Nemo’s colors from our lighting … we used orange and white glass stones and lit them from inside with LED candles. Our table marker was a seahorse. 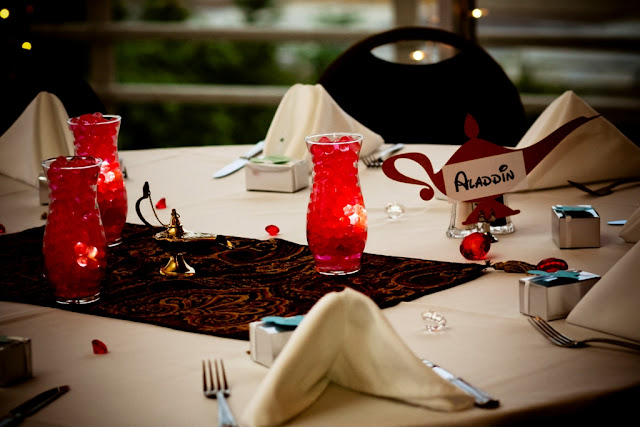 Table #15: Aladdin. For the base of this centerpiece, we found some home decor fabric that we liked that we thought could resemble a flying carpet. I serged the edges and sewed tassels to the corners, and we created a mini flying carpet. We put a magic lamp in the middle of the carpet and surrounded it with red jewels like Aladdin and Abu find in the Cave of Wonders. For lighting, we used “submersible” LED lights in red Aquagems inside fancy looking vases.  The table marker was a lamp. 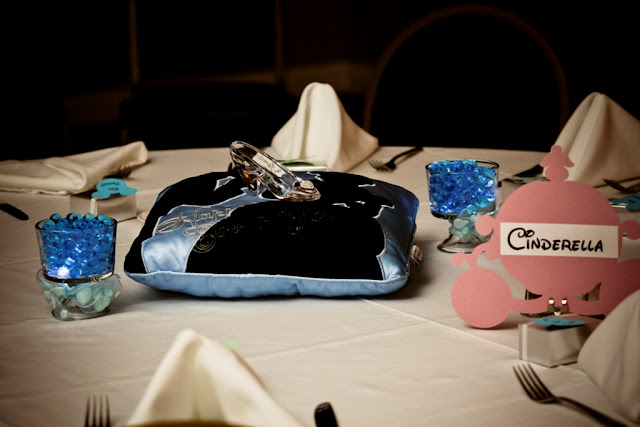 Table #16: Cinderella.  For the central part of this one, we used a glass slipper that we had purchased at Walt Disney World. We had gotten it the day after we got engaged to commemorate the event. It has our names and engagement date inscribed on it. We had it sitting atop a satin pillow we had also purchased at Disney World. It has the silhouettes of Cinderella and Prince Charming on it, and it says “Happily Ever After.” The pillow was supposed to be surrounded by blue “princess gems” as the scatter … but I forgot to put them out! Oops! It just goes to show that no matter how much you plan, you’ll always miss something … and that’s perfectly okay, because nobody will know but you!  For lighting we used blue Aquagems and “submersible” LED lights in glasses that resembled goblets, and we tied sparkly ribbon around them.  The table marker was Cinderella’s Coach. 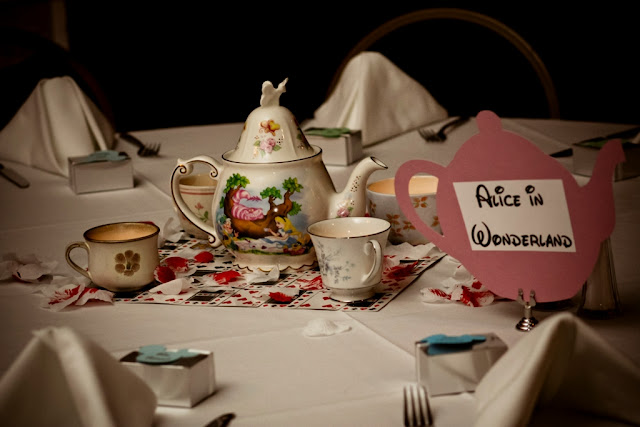 Table #17: Alice in Wonderland. For the base of this one, Christopher took a piece of square cardboard and glued playing cards to it to form a mat. We borrowed my Mom’s Alice in Wonderland teapot (which she had gotten at EPCOT, in case anyone wants one) and put it in the center. [Ed note – At the time this post was written, the same teapot was available on Amazon.] Then we went to antique shops and bought mismatched teacups to put around the teapot. We put LED candles in the teacups for lighting. For scatter, we took white rose petals and splattered red paint on them.  The table marker was the shape of a teapot. 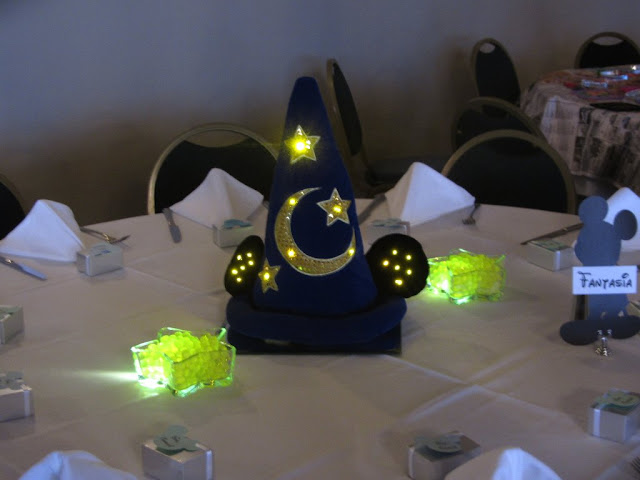 Table #18: Fantasia. This table was pretty simple. We borrowed my sister’s Sorcerer Mickey hat … which just so happened to have a battery pack inside which made it light up and sparkle! We also added some little votives on the sides that were shaped like the stars on the hat, and added some “submersible” LED lights and yellow Aquagems for lighting. The table marker was shaped like the one and only Mickey Mouse. 🙂 I apologize for not having a better photo of this one … I think that this is from a guest’s camera. 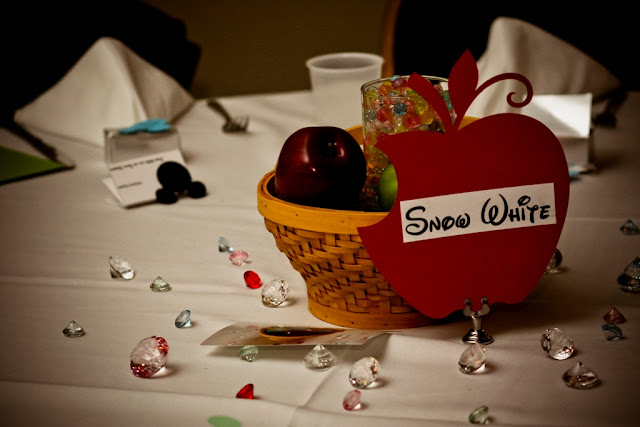 Table #19: Snow White.  For Snow White we placed a basket of green apples on the table with a single red “poison” apple. We used a glass votive with “submersible” LED lights and Aquagems for lighting. Both the Aquagems and the princess jewels that we used for scatter were Snow’s colors … red, blue, and yellow. The table marker was a bitten apple. I apologize because the “reference photo” had not been taken off of the table yet at the time this picture was taken! (We took reference photos that showed how to assemble all of the centerpieces for everyone that came and helped us set them up, as well as notecards with step-by-step instructions. These things were complicated, haha!) 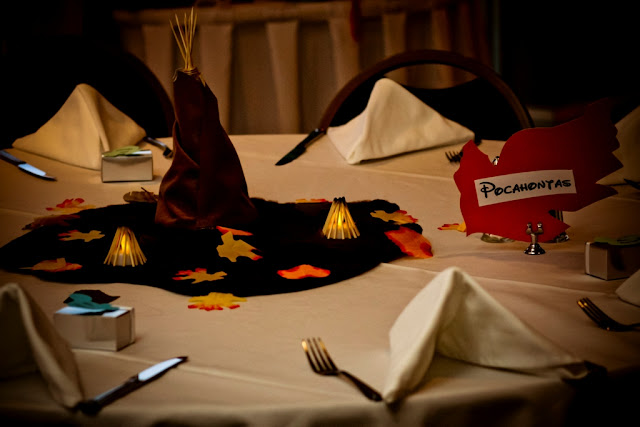 Table #20: Pocahontas. Christopher created a tee-pee for this table using kebob sticks, suede fabric, and, of all things, Play-Doh (you can’t see the Play-Doh, but that’s what he used inside to keep everything in place…it worked out perfectly)! He made little campfires which he singed at the top to make them look like they had been on fire, and then he glued some LED candles inside of them for the “fire” part. We used autumn leaves for the scatter, and set the entire scene on a “bear-skin rug”, AKA a small piece of faux fur from JoAnn’s that serged into an interesting shape.

We have one more amazing table from Jamie and Christopher’s wedding to share, which is their completely amazing The Little Mermaid head table!  It deserves a post of its own, so come back tomorrow to check it out!

***
What do you think of all these amazing centerpieces?  They are so detailed and executed so well.  I could look at them all day!  Are you feeling inspired for your own Disney wedding?
467 Shares
Tweet
Share
Pin467
Share