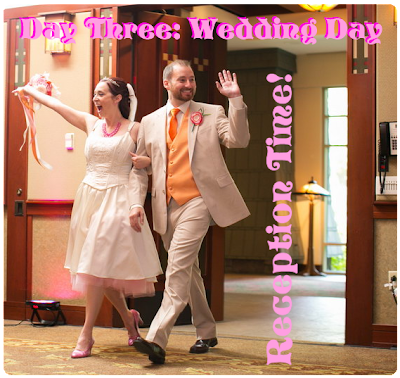 When we left off, Mr. BFT and I had just finished up some portraits in the Brisa Courtyard and had re-joined our wedding guests at Pre-Reception.  It wasn’t long before a Cast Member came through with chimes, announcing the reception room was now open.  The guests slowly made their way out of the Brisa Courtyard while Mr. BFT and I waited behind.  When the last guest was finally inside, we dug into the food!  We also had a chance to talk to our harpist Ted for a little bit while he was shutting down.  We thanked him for his wonderful music and asked him if everything went smoothly, and he said it did!
At some point while we were stuffing our faces with delicious cheeses and fruit, our coordinator Julie came out and said we would be making our “grand entrance” in about 10 minutes.  She also took our drink order so they’d be ready at our table when we sat down (awesome).  Julie remembered our conversation at rehearsal about Italian Margaritas and asked if I’d like one (duh).  Mr. BFT requested a gin and tonic.  She left and came back in a couple minutes to tell us it was time to go!
Meanwhile, our photographers The Roots were inside snapping some more pretty reception decor photos. 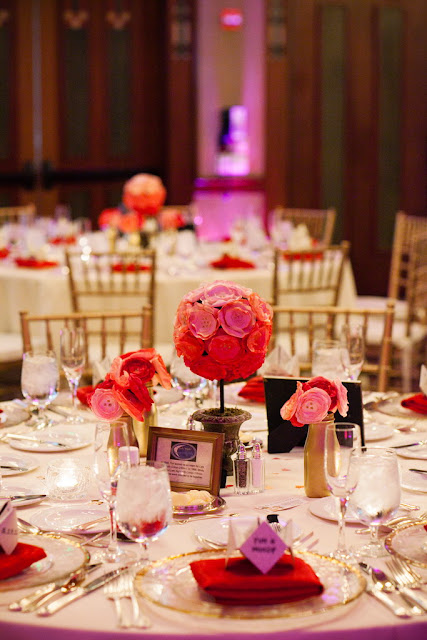 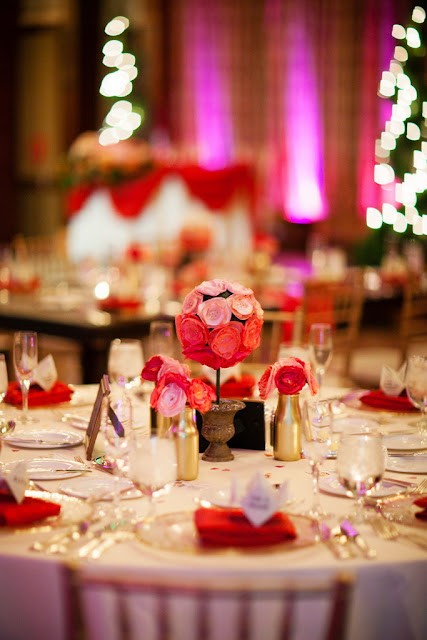 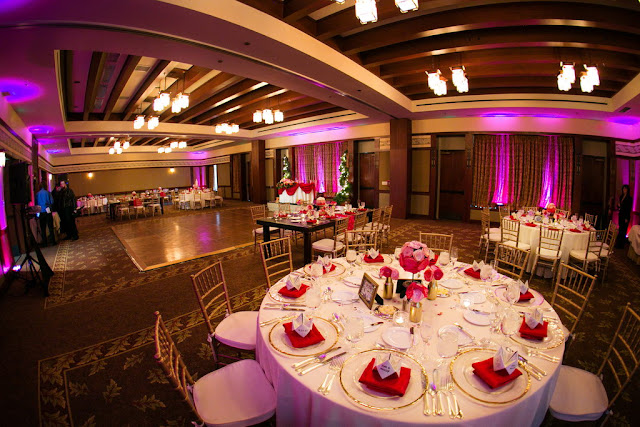 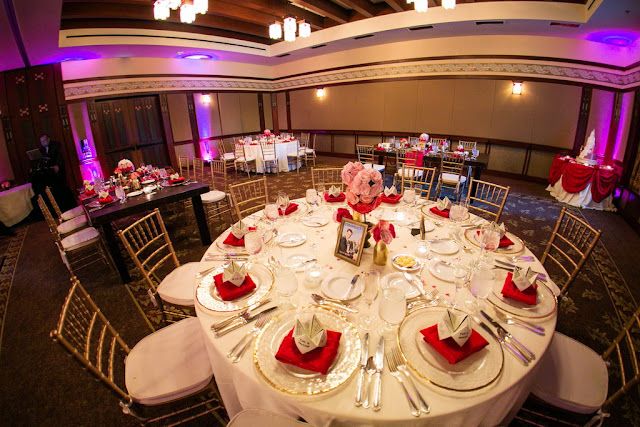 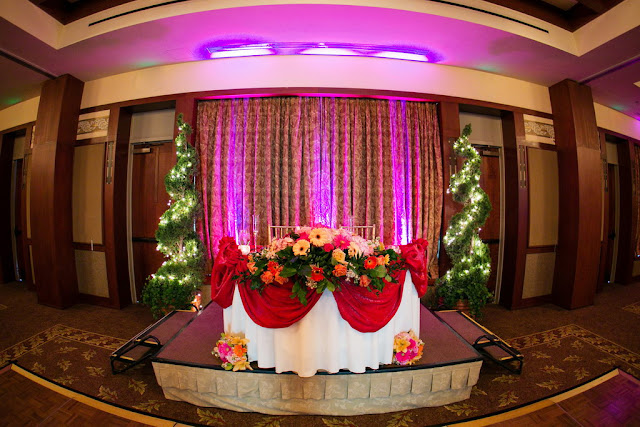 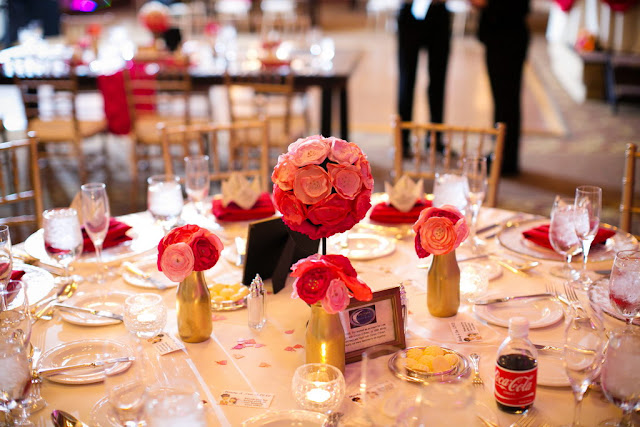 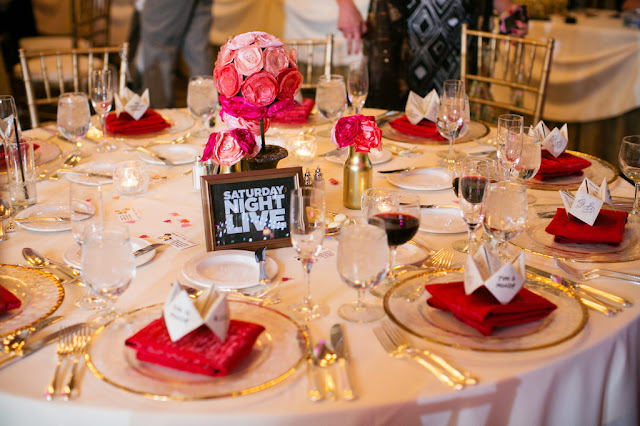 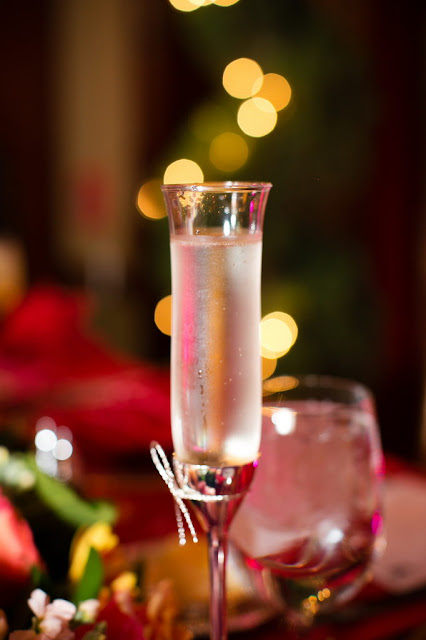 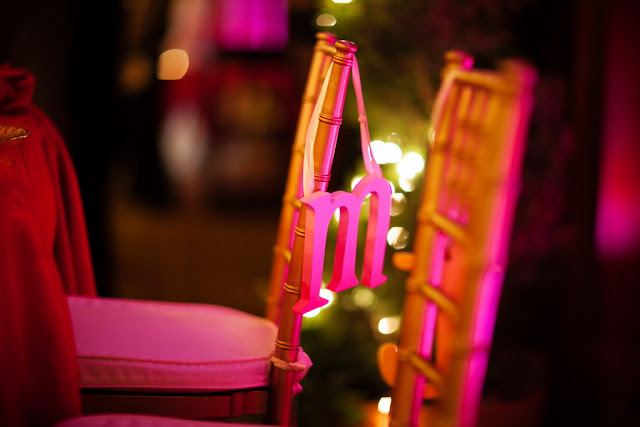 As we waited outside the door, our DJ came out to us and told us he had some bad news.  The file for our first dance song (Golden Age by Beck) was corrupted!  He said he had been trying to re-download the song but the WiFi connection wasn’t cooperating.  My stomach dropped for a second but I also thought, “Ooooh, maybe we’ll have no choice but to dance to my first choice in first dance songs, I See The Light from Tangled.  Hehehe.”  But immediately Mr. BFT said, “I have the song on my phone, can you play it from there?”  Our DJ said yes and my dreams were dashed.  Haha.

A few seconds later we were introduced while The Tonight Show with Johnny Carson theme played. 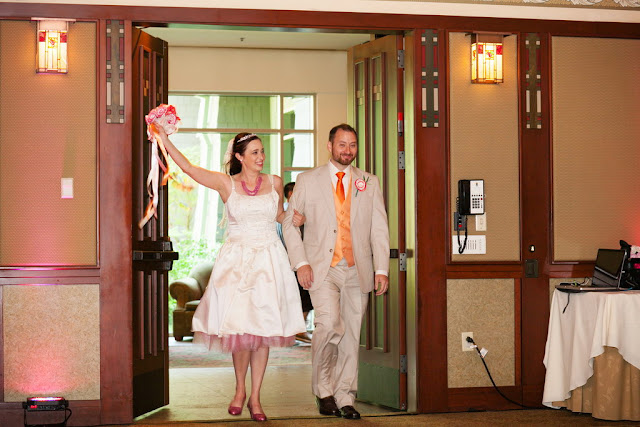 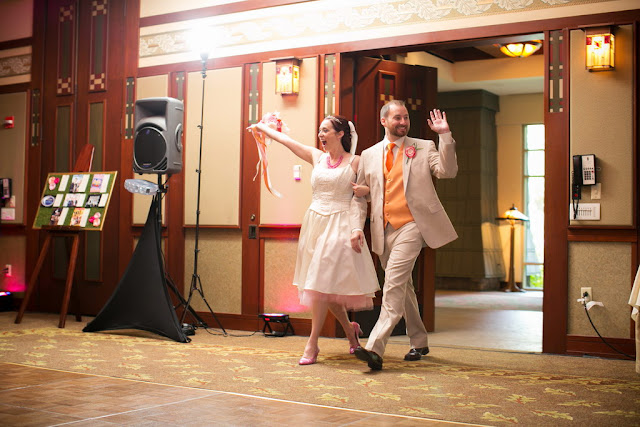 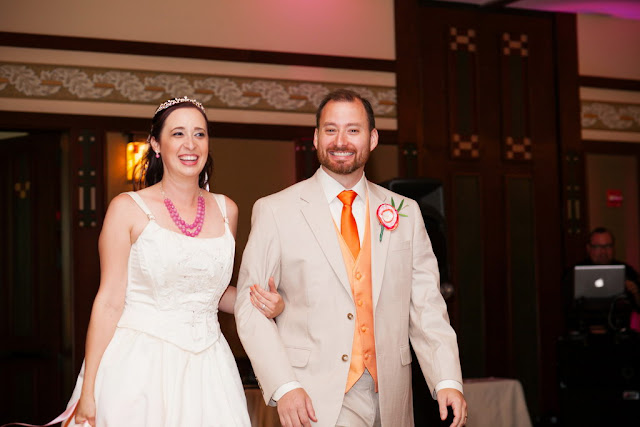 It actually took a little bit of time (and felt like an eternity) and some assistance from Mr. BFT for our song to start playing …. 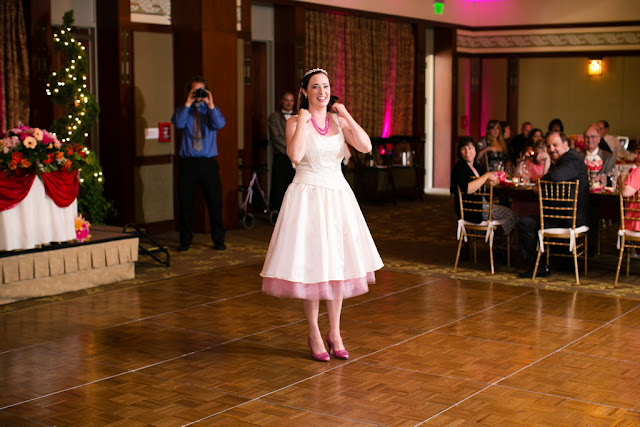 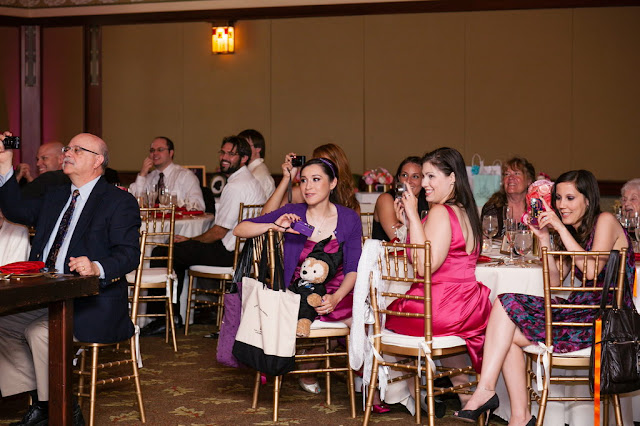 A bored crowd waits patiently with cameras at the ready …

… but it did finally get started. And then it never stopped.  We requested to only dance to 90 seconds of the song but I suppose in all the excitement our DJ forgot that detail.  So we danced for the entire 3+ minutes.  That’s a LONG TIME to be in the spotlight.  Mr. BFT and I killed time by quietly talking about how awkward we felt. 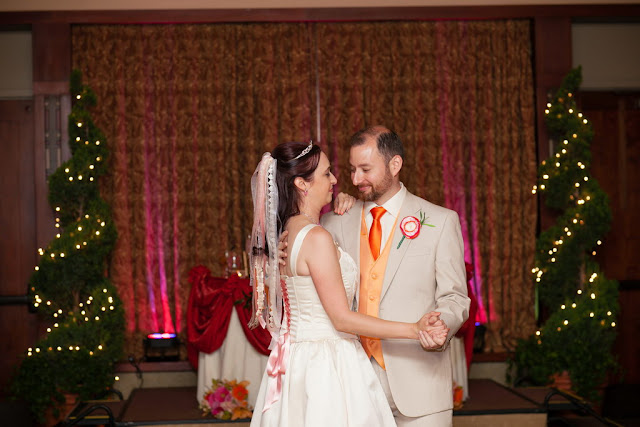 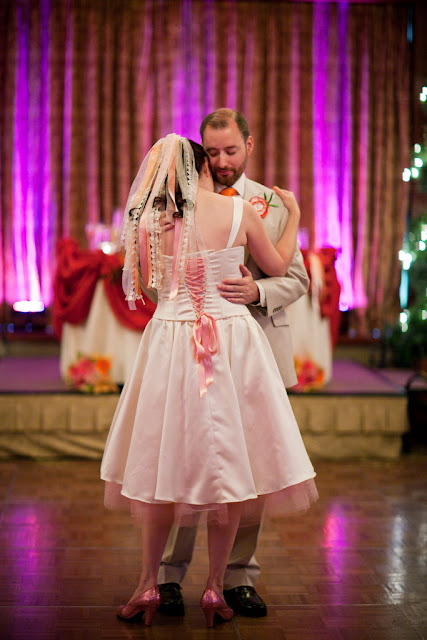 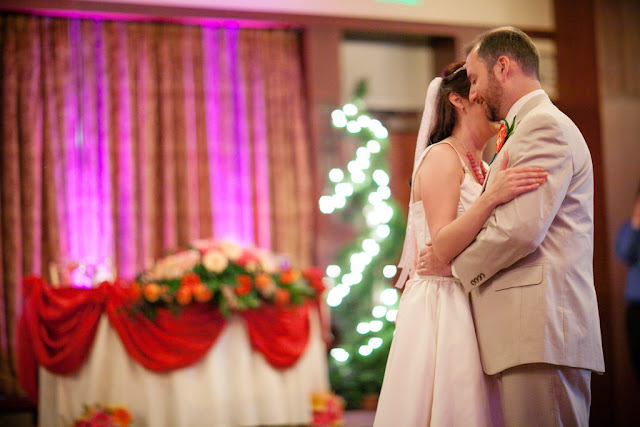 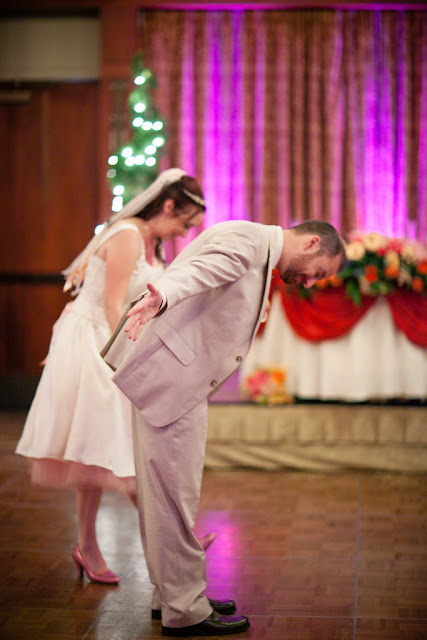 Immediately after our first dance, we invited my dad and Mr. BFT’s mom up for the parent dances.  We danced to In My Life by The Beatles. 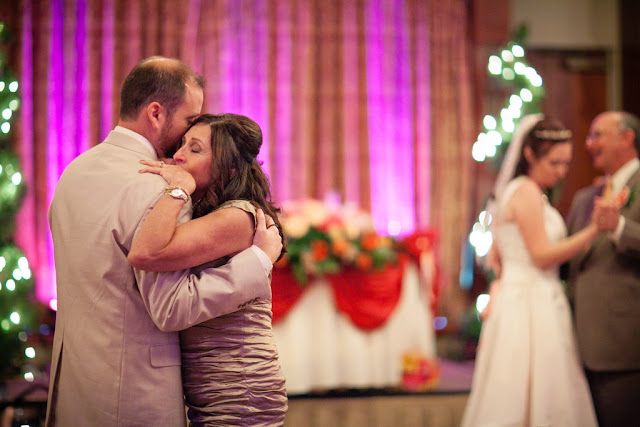 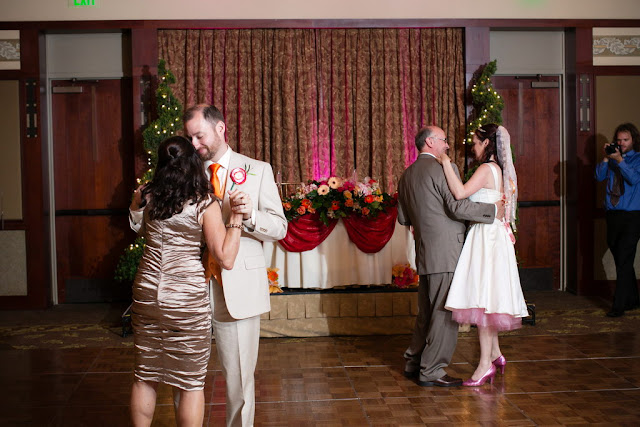 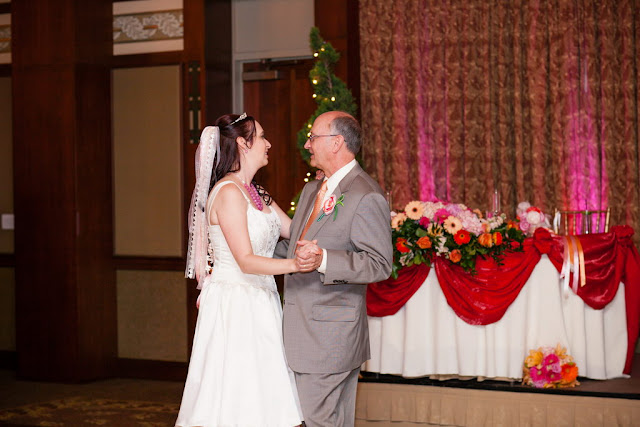 After the parents dances, we sat down and it was time for toasts!  We had asked our dads if they wanted to make toasts, and decided not to open the floor to anyone else.  We have both been to weddings where the open toasting turns into a runaway train.  Both our dads made great and thoughtful toasts that made me cry into my champagne like a baby. 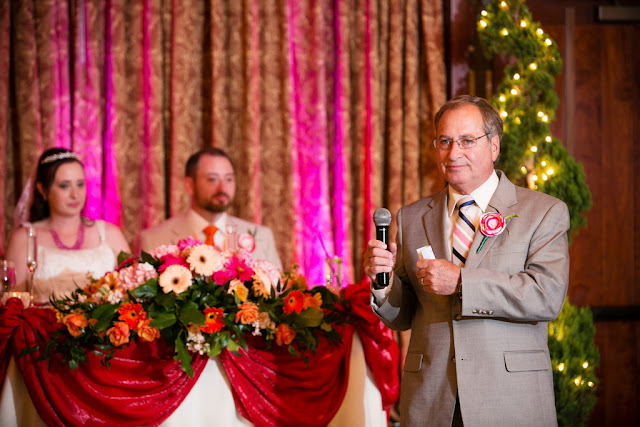 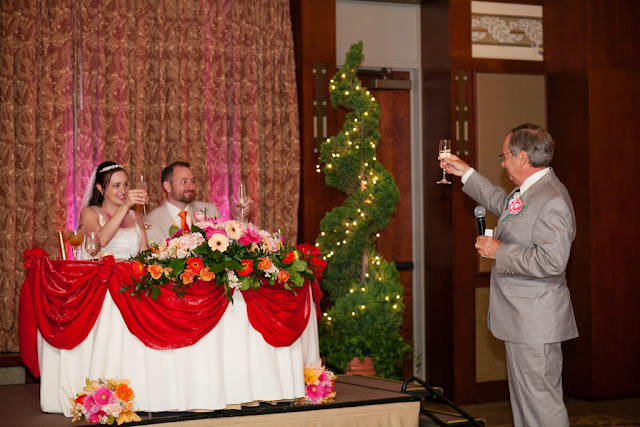 Mr. BFT’s dad made a nice speech about how proud they were of him and how shortly after moving to Los Angeles he started talking about “this girl named Mindy.”  And they were very happy to welcome me into the family.  *cue tears* 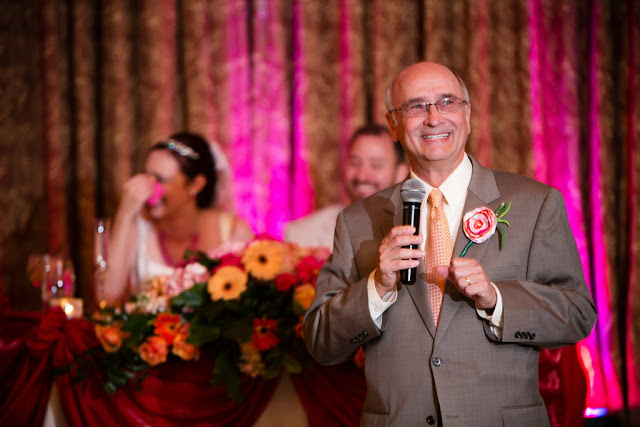 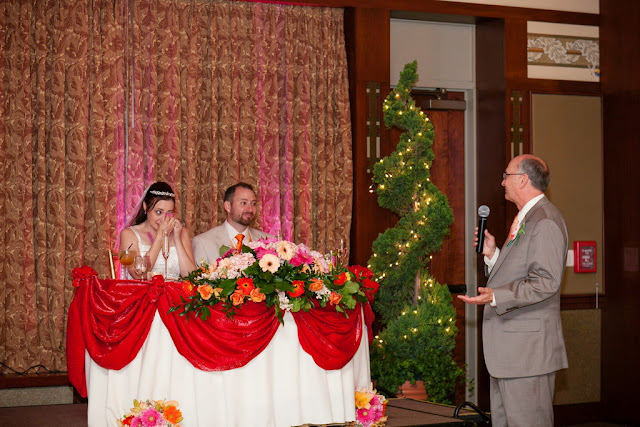 My dad, who is an aerospace engineer, started to make a speech about the solar eclipse that weekend, which drew big laughs from the crowd.  But then he tied it into “two heavenly bodies meeting” and how the sun and earth would soon go their separate ways but Mr. BFT and I were together forever.  *cue more tears*

After toasts, it was time for FOOOOOD!  Check back next week for the nom-nom lunch recap.