I slept a little better on Saturday night than Friday night but still woke up before my alarm was set at 4:15am.  Must have been anticipation!  But I got a couple hours of sleep, which was way better than last year when I didn’t sleep AT ALL the night before.  That was rough!  It didn’t take me too long to get ready and walk over to meet up with some friends at the Disneyland Hotel at 5:00am.

My friend Becca looked so cute in her Vanellope running costume!  This was her first half marathon and she crushed it!  And of course, I am dressed as Mulan for today’s race. 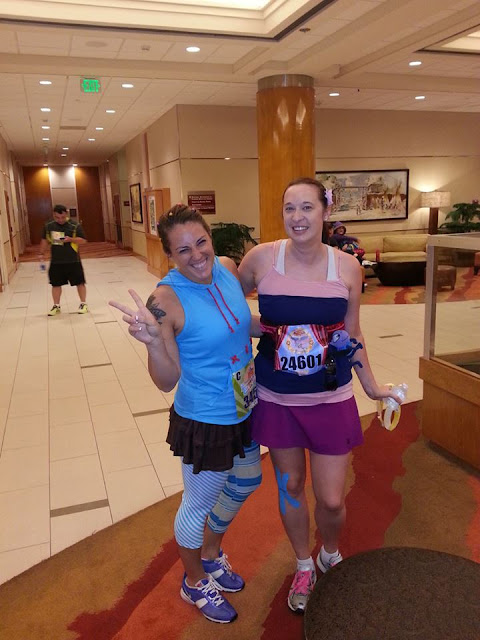 We all walked over together and, like the previous day before the 10k, there was some confusion on how to get to our corrals.  I just followed Becca who was in Corral C, and even though I was in Corral F, no one stopped me.  Things got really crowded on the sidewalk so I decided to stay put and not try to push my way through to Corral F and stress myself out.  Soon things were getting started and Corral A was released, followed by Corral B.  Then Corral C started moving forward and I was swept up in it.  Oh well, I guess I was starting in Corral C!  Whoops.

Soon enough, we were underway! 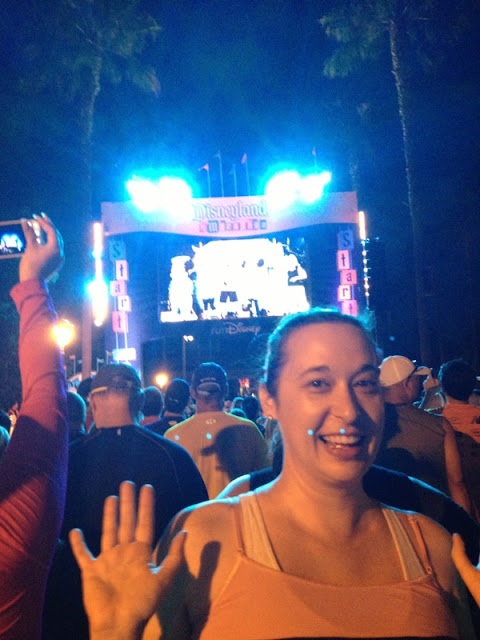 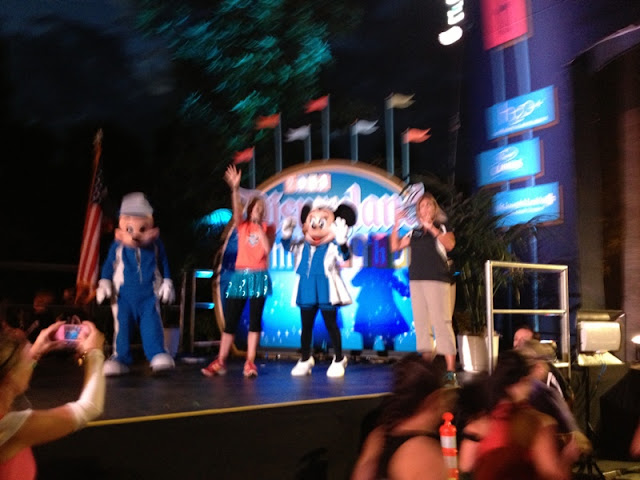 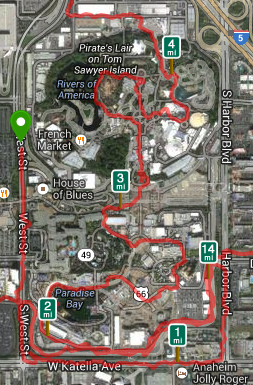 Last year I took a billion pictures … and this year I took considerably less, for a couple reasons.  First, I knew I was going to be a lot slower than last year due to my lack of training for the past month, and I didn’t want to slow myself down even further with pictures.  Second, the race course was nearly identical to last year.  So, if you want to see more pictures from the course, check out my recap from the 2012 Half Marathon.

But there were a couple stops I couldn’t resist … I love the World of Color fountains and Mickey’s Fun Wheel. 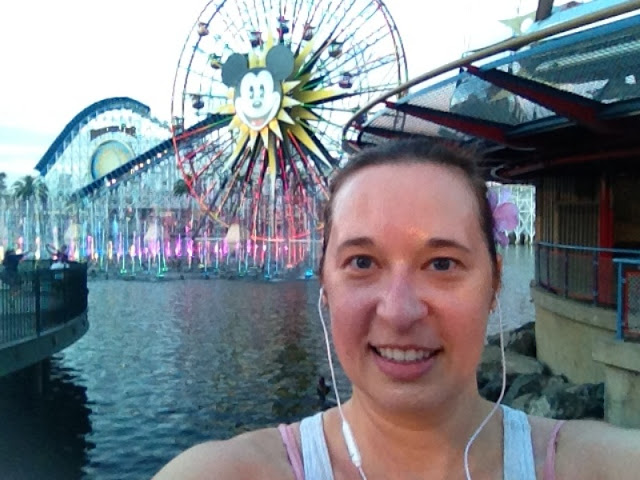 This part was new this year … instead of entering Disneyland from backstage, we ran through the Esplanade and the front gates, which I loved! 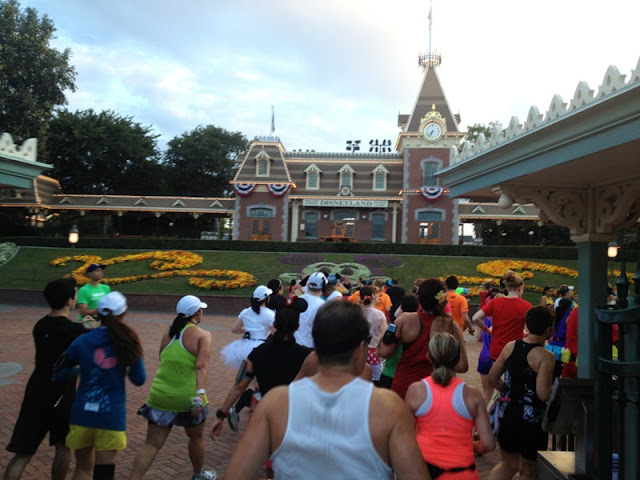 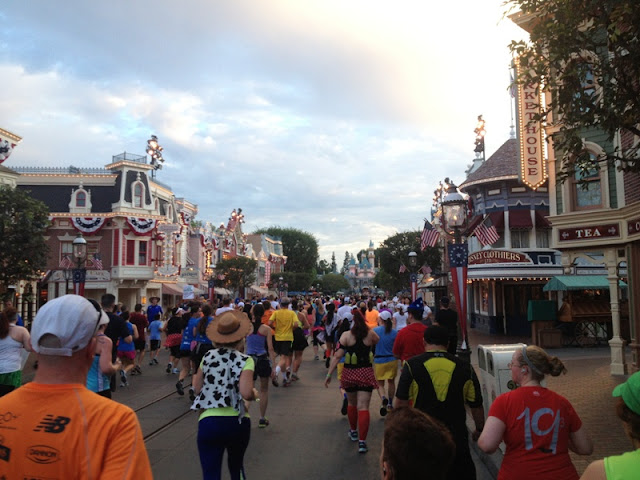 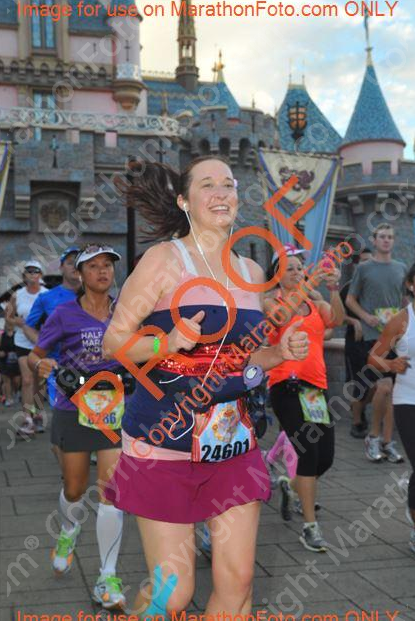 I love this picture of me after running through the castle.  It’s my favorite part of the race!  It was also only mile 3 and I was still feeling pretty good.  (I bought all these pro digital images and I’ll update the post when I receive them.)

The half way marker … definitely feeling a lot of pain at this point, mostly blisters on my toes and the bottom of my feet. 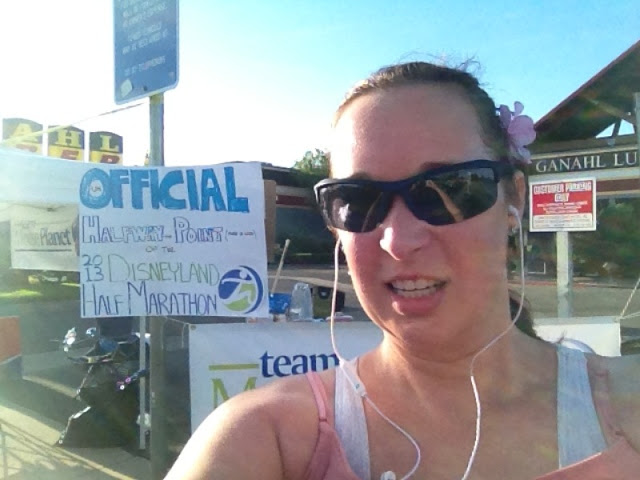 Everything from here on out was not pretty.  I was in a lot of pain, it was hot as Hades, and sweat was dripping off my forehead, collecting sunscreen and stinging my eyes (I didn’t wear any kind of headband, visor, or hat – NOT smart).  I basically couldn’t open my eyes more than a sliver during mile 7 and I thought for a few minutes I was going to have to rip my contacts out and run the rest of the race blind.  But my eyes eventually recovered.

Here’s me around mile 9, entering Angels stadium.  I’m super over everything at this point. 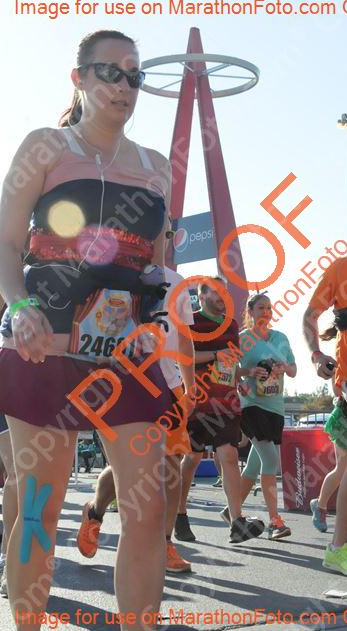 Some time during mile 10, I remember the exact moment the band-aid slipped off my biggest toe blister that formed after the 10k.  Ouch.  Lots of ouch.  Also during mile 10, I started to feel very exhausted.  My heart was racing and I knew I needed to slow way down.  I think I was also getting a bit of dehydration and heat stroke.  I was pretty happy with my pace, somewhere between 14 and 15 minutes per mile, so I knew I could slow way down for the last few miles and still finish, and that’s exactly what I did.

Passing the mile 12 marker was when I realized I was going to finish, and I did some ugly crying all through that last mile.  Right before the finish line, Mr. BFT was waiting there for me with my 10k medal, which I wore as I crossed the finish. 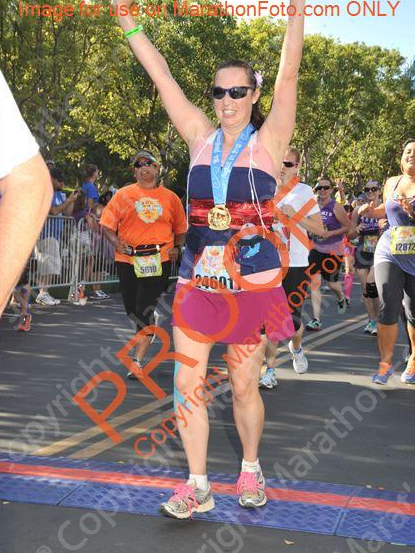 I was under pace requirements and I WASN’T LAST.  I missed last year’s time by 12 minutes, and don’t care at all.  I did what I set out to do – complete the inaugural Dumbo Double Date.  Times didn’t matter.  I did it!  I don’t think I’ll ever forget the moment the volunteer sniped the green plastic bracelet off my wrist and placed the Dumbo medal around my neck, and told me “congratulations.”  Congratulations. 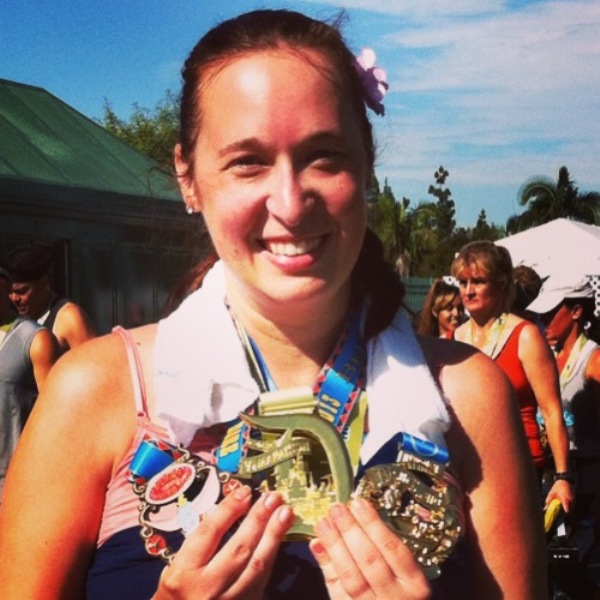 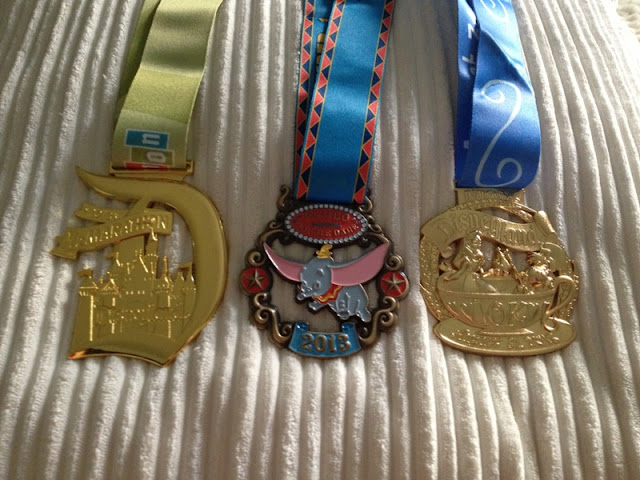 So pretty.  So shiny.

So, what did I learn from my second half marathon?  Tons.

Sports tape and compression socks are my friends.  I’m super mad I didn’t try these things last year.  The tape saved my knee, which gave me a lot of problems during my first half marathon.  This year, I felt nearly nothing.  I also have been very careful with conditioning my knee – stretching and icing it – in the weeks leading up to this year’s race.  But I think the tape did the trick.  The compression socks I purchased based on a recommendation from an online running friend when I pulled my calf muscle a couple weeks before the race.  After one day wearing the socks, my calf was 90% recovered.  Miracle fabric, I tell ya.  I wore compression calf sleeves during the 10k and all day after the half marathon.  My recovery was much, much easier this year verses last year.  Pretty much a night and day difference.  I realize that my body is simply better conditioned this year than last year, but I believe the tape and the socks were a huge help.

Finally, I have an announcement.  This will be my last half marathon.  Yep, I’m putting it out there with no doubts or regrets.  It’s time to admit I am not a runner.  I gave it a good try, eh?  But it’s time to face the fact that my body is not built for distance running.  It doesn’t mean I won’t do short runs.  In fact, I really enjoyed the 10k and signed up for the Tinkerbell 10k in January 2014!  I see a lot of 10ks in my future.  5ks are too short, halfs are too long, but 10ks are juuuust right.  I’m really proud of the two half marathons that I completed, and I’m really proud I went and did something I thought would be impossible.  And, yes … I still have “complete a marathon” on my Life List and I’m not going to delete it just yet.  Maybe in a couple decades … I read somewhere that some runners don’t reach their peak until they are in their 50s.  Maybe that’s me.

Humblebrag moment: I’ve had a few people tell me I’ve inspired them to try running.  I get teary eyed just typing that out.  I never would have thought I would inspire anyone to do anything, let alone something fitness related.  I feel like I’m just a normal person.  And I truly believe that, if I can do this, with the odds stacked against me, then anyone could do it.  (But talk to your doctor before you start any new exercise regimen, seriously, y’all.  I did.)  Even if running is not your thing, I encourage you to break out of your comfort zone.  Try something new.  Set your goals higher than you think possible, and amazing things will happen.  You are stronger, smarter, and capable of more than you think.  I promise.

“All the adversity I’ve had in my life, all my troubles and obstacles, have strengthened me.” – Walt Disney