Today we have a guest post from Disneyland Bride Hope.  Hope and her husband were married at the Disneyland Hotel in 2010, and one of their favorite memories is their early morning in-park photo shoot at Disneyland.  One of the amazing perks of getting married at a Disney resort is the ability to do a private photo shoot at Disneyland or the Magic Kingdom, and it is often a decision the couple must weigh heavily, due to the costs involved and the sometimes unpredictable restrictions levied by the park management.  But those who are able to afford this experience say the memories are worth every cent.  Here is what Hope has to say about their early morning Disneyland wedding photo shoot. 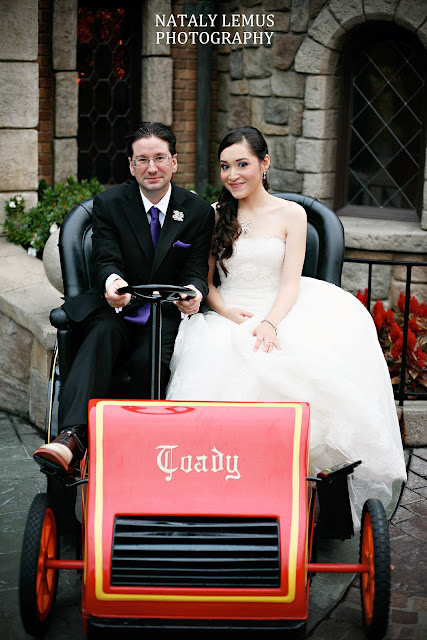 Having an in-park shoot was one of our favorite memories about our wedding. Getting to walk around a virtually empty park on our actual wedding day in our wedding clothes was surreal and a real dream come true. Since we couldn’t host our event inside the theme parks, a photo shoot was the next best thing and we felt especially honored to be among the first set of couples to get the opportunity after what seemed like a long castle-shoot hiatus. (Prior to our shoot, we hadn’t heard about or seen any recent shoots inside the parks – other than the publicity images to promote Disney’s Fairytale Weddings.)

We were really excited about walking around the park by ourselves before it opened and imagined that this was probably what it was like for Walt Disney himself when he toured Disneyland in the mornings. In fact, we made sure to get photographed in the same locations that we’ve seen in some famous Walt portraits!
Before you consider adding this experience to your wedding day, here are some things to note: 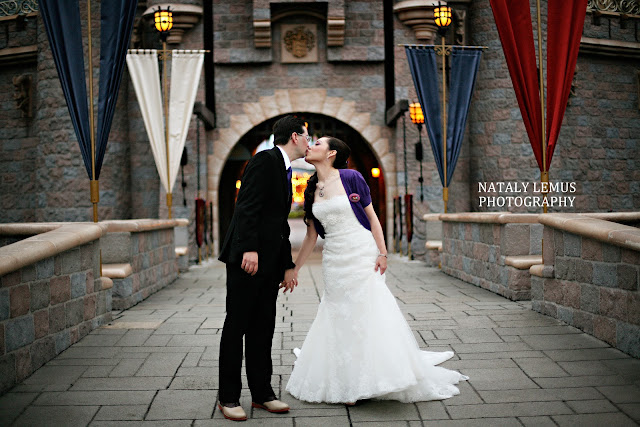 1) The shoots occur early in the morning before Disneyland opens. Our shoot began at 6am and lasted about an hour because we needed to vacate the theme park before regular park guests were admitted. Since it was a “Magic Morning” day for hotel guests, it meant that we had to be camera ready at 5:45am so that we could be escorted into the parks for our shoot. When we booked our shoot, we were allowed to do it on the morning of our wedding (something we chose to do so that we could save money since it meant we wouldn’t have to pay for our photographers and hair and makeup team to come back on another day.)

2) The shoots must be approved by theme park management and aren’t always granted.

3) The cost for the shoot is a separate fee and is on top of the minimum expenditure. Having a castle shoot does not count toward your minimum.

4) The cost for the shoot only includes permission to photograph inside of Disneyland and does not include your own photographers’ fee for shooting, editing and printing the images. Since we already had our wedding day photographers for the entire day, it made financial sense for us to have the shoot on the same day that they were already contracted to be there. It meant that my wakeup call was 3am (yikes!). I didn’t get much sleep the night before anyway so I probably would’ve been awake at that time regardless of the shoot. Also note that with a wake-up call this early, your hair and makeup vendors will most likely assess an “early morning fee.”  To date, I hold the record for earliest call time with my hair and makeup team.

5) The shoots only grant you access to the Castle area. There have been recent shoots where couples have wandered off into Main Street U.S.A. and we ourselves managed some images in Fantasyland, but this is not guaranteed and all other areas of the park are off-limits.

6) Your time in the park for the shoot is limited (ours was just about an hour) so make sure you have an idea of where you want to get photographs and get to them right away. It felt like time flew by extra fast during our shoot and I imagine that if you have a long list of “must-get-shots” that the time will go by even faster.

7) Above all, have fun! Not many couples can add these types of pictures to their wedding day albums and it is an once-in-a-lifetime opportunity so enjoy yourselves. If you have anything that will make your shoot even more memorable, bring it along. We brought our plush toys for instance, and I know that other couples have provided small props to add to their photo-ops.

The fee for the shoot has doubled since we took our photographs three years ago and most of them are scheduled a day or two after the wedding day now. If you’re one of those couples with a generous budget and don’t mind seeing each other before the walk down the aisle, then this may be ideal for you. Since we knew we were going to do a “First Look” anyway, having our castle shoot hours before our official walk down the aisle didn’t bother us. With all the recent price and schedule changes, I’m really glad that we were able to fit the opportunity into our budget and schedule of the day.

It really was such a memorable experience and a wonderful way to start off our wedding day! 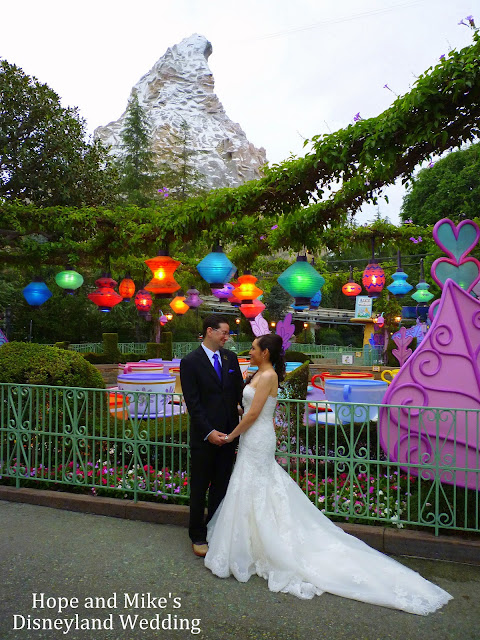