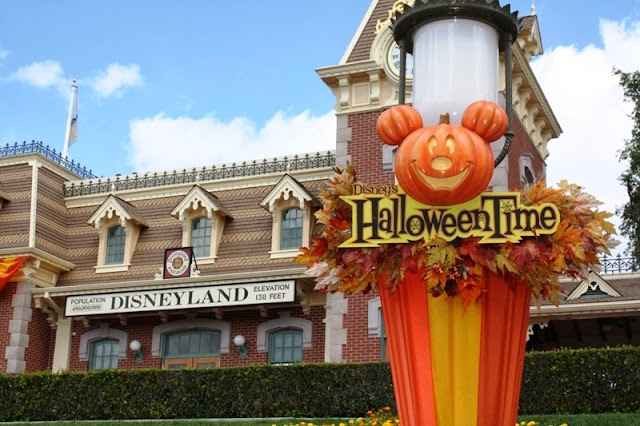 It’s October, which means your Facebook timeline is filled with posts about Pumpkin Spice Lattes and Ugg boots. Or, if you run in the same circles as I do, it’s filled with talks of Halloween festivities at the Disney Parks!

Disney starts celebrating Halloween a little early, in mid-September (too early if you ask me), so some of these images might be old news to a lot of you.  But for those who have never been to Disneyland (*gasp*) or just can’t get enough Disneyland fixes, this post is for you!

Disneyland really started getting into the Halloween spirit over the last decade.  It started with a some candy corn colored bunting on Main Street facades, then a big Mickey pumpkin for picture ops, then a special fireworks show, then, BOOM — orange explosion everywhere.

A few years back, Disneyland started offering private Halloween parties on certain nights in October.  Guests are allowed to wear costumes (not allowed during regular park hours), and there is trick-or-treating, special character interactions, and the aforementioned special Halloween fireworks spectacular.  Sadly, I have never had a chance to experience this special party, so there won’t be any recap of that in this post … maybe someday!

The Halloween overload starts before you even enter the parks, with giant “carved pumpkins” in the likeness of the Fab Five. 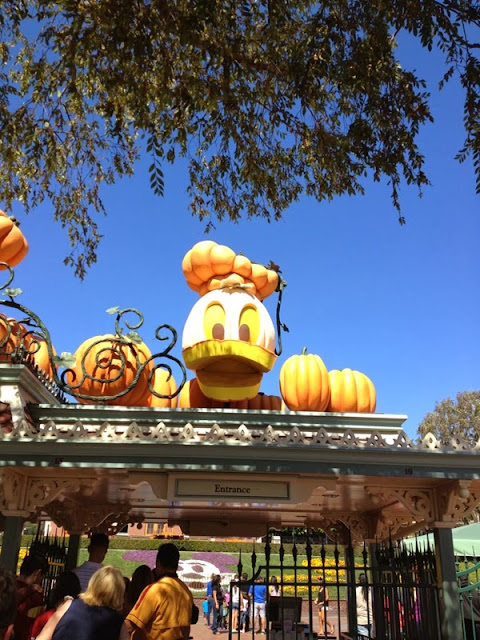 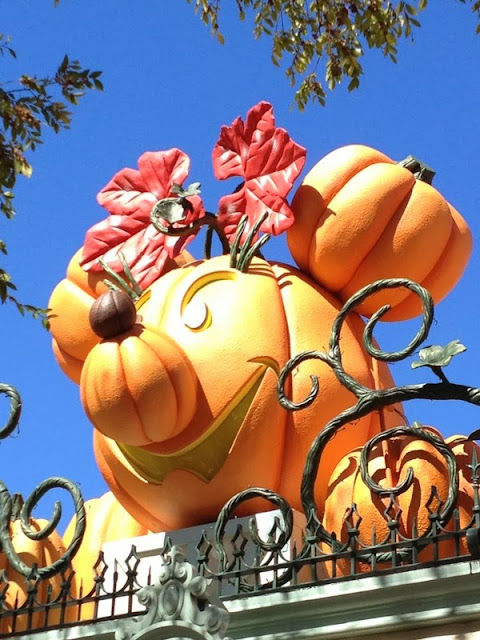 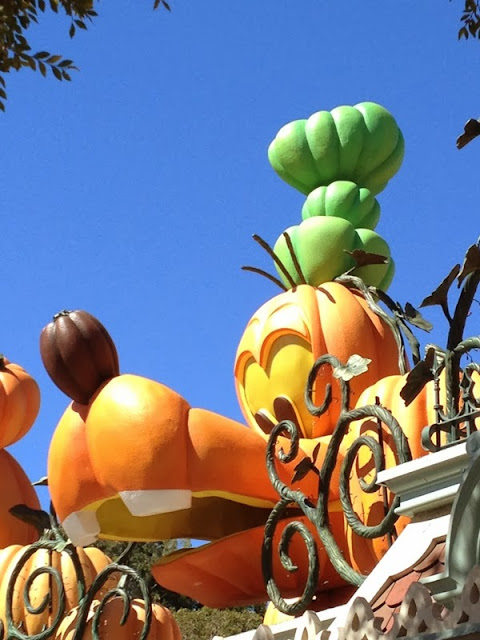 Down Main Street there are jack-o-lanterns staged on all the balconies. 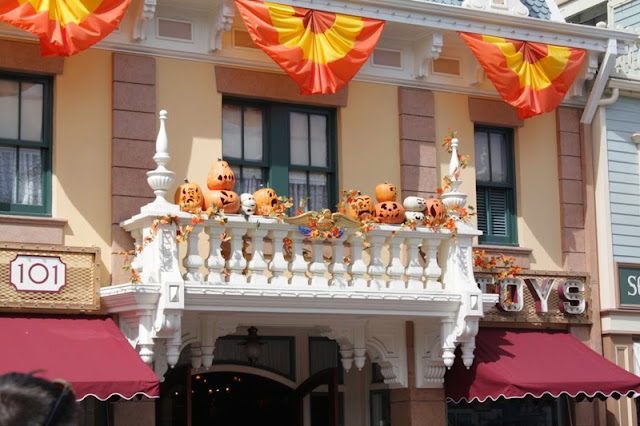 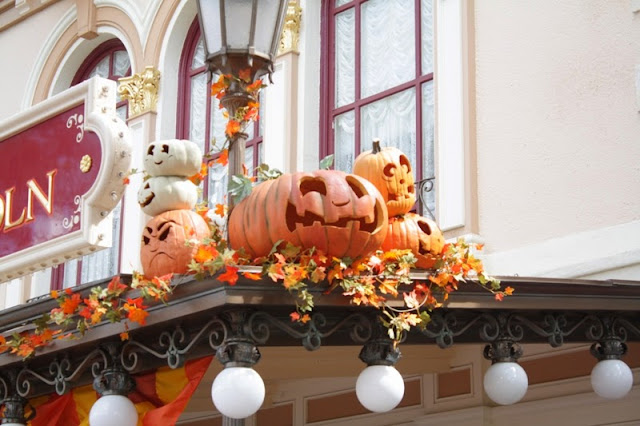 An impressive winking Mickey jack-o-lantern greets you right at the end of Main Street. 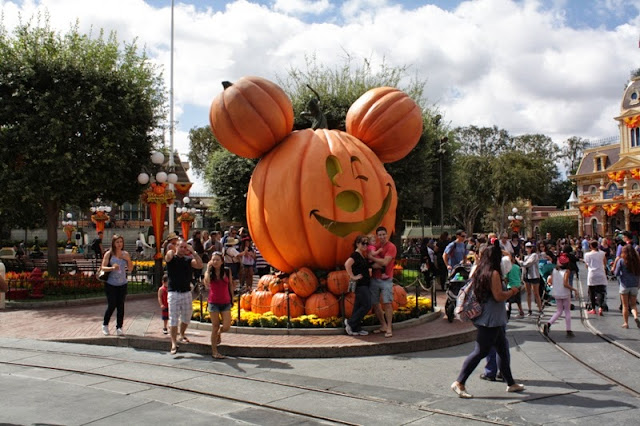 Even the newly revamped Market House gets the Halloween treatment. 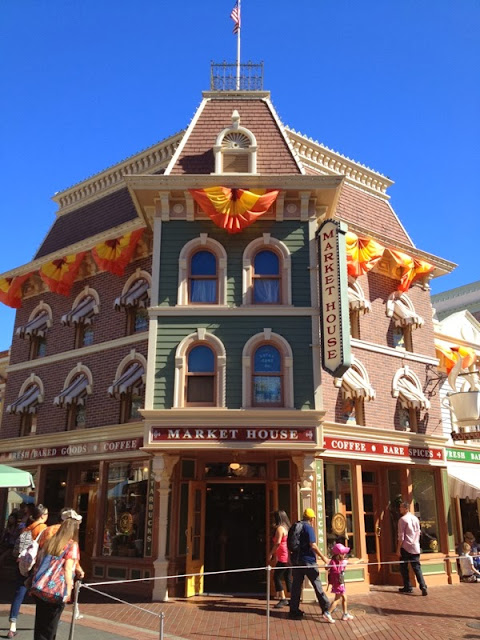 At the hub, the Partners statue is surrounded by carved pumpkins, each depicting a character that represents a Land inside Disneyland.  All the flowerbeds are planted with fall hues – yellows, oranges, and reds. 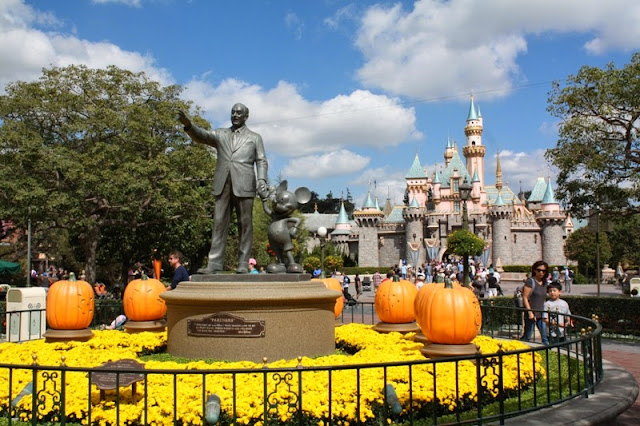 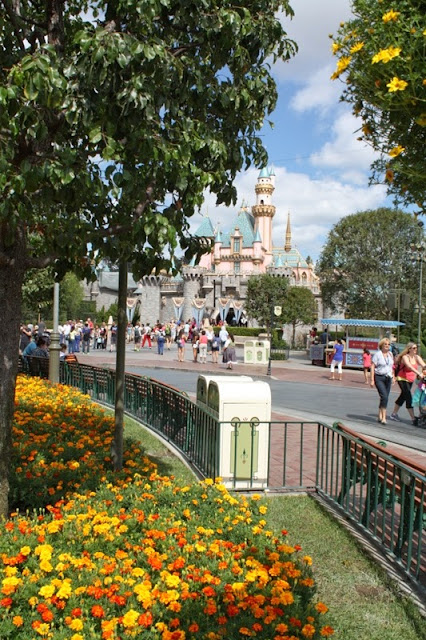 In Frontierland is the famous Halloween Tree, with unique jack o’lanterns hanging from the branches, and at night it is lit up with brilliant orange and purple hues.  It’s truly gorgeous at night (too bad I wasn’t there late enough to photograph). 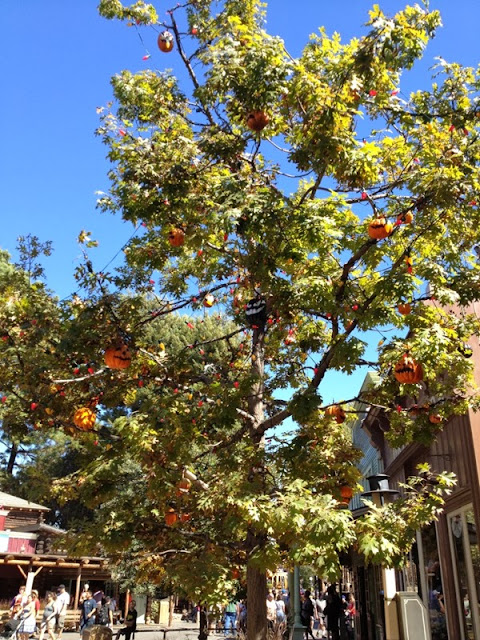 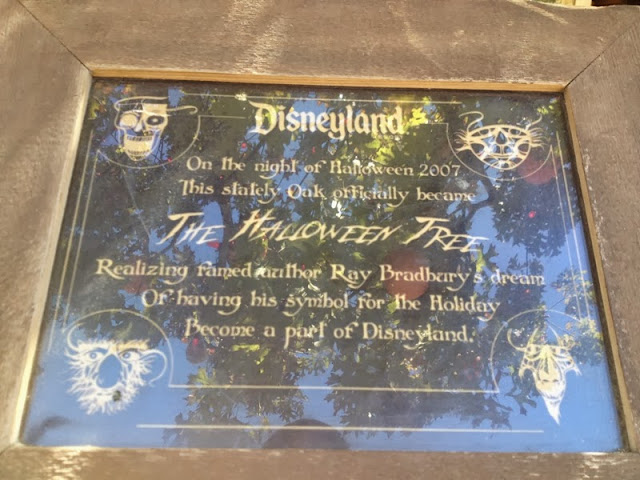 Moving on to Haunted Mansion Holiday (HMH), the attraction that launched the Halloweentime craze at Disneyland.  It’s tough for me to grasp that HMH in it’s thirteenth year since I so clearly remember the first year (I’m super old).  HMH is a Nightmare Before Christmas overlay added to the Haunted Mansion Attraction.  It is very impressive how the ride is transformed every year, yet the same old Haunted Mansion you’re used to is still peeking through. 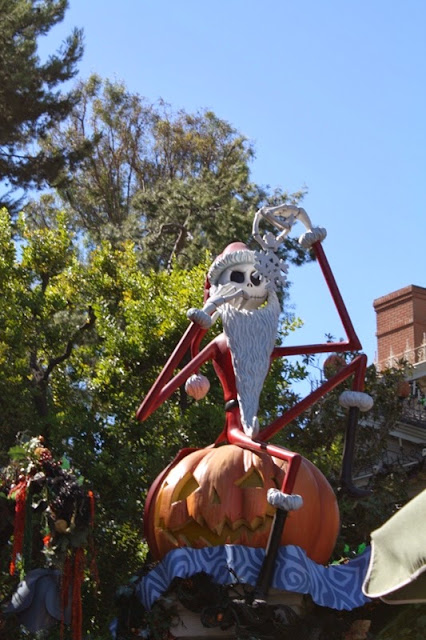 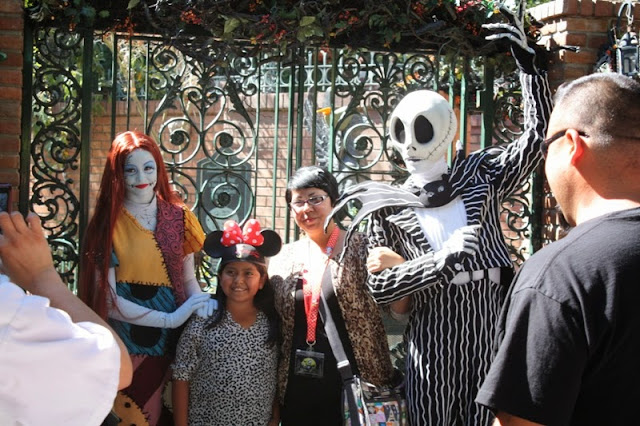 Jack and Sally posing for pictures outside of the queue area. 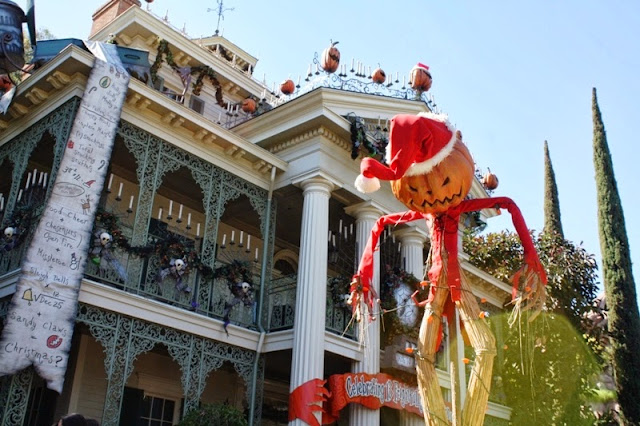 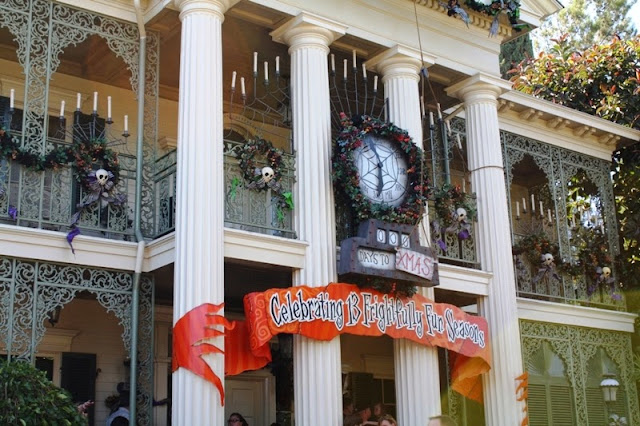 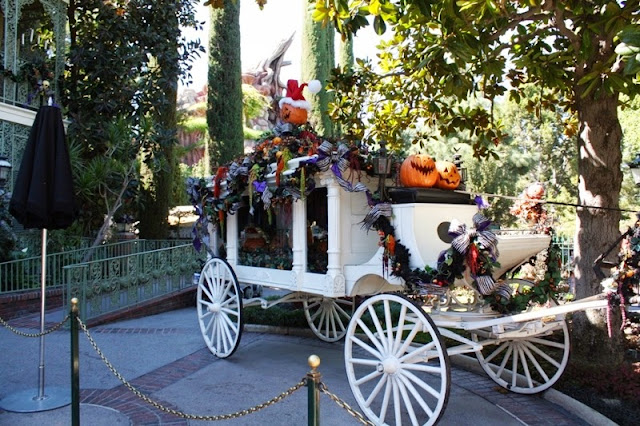 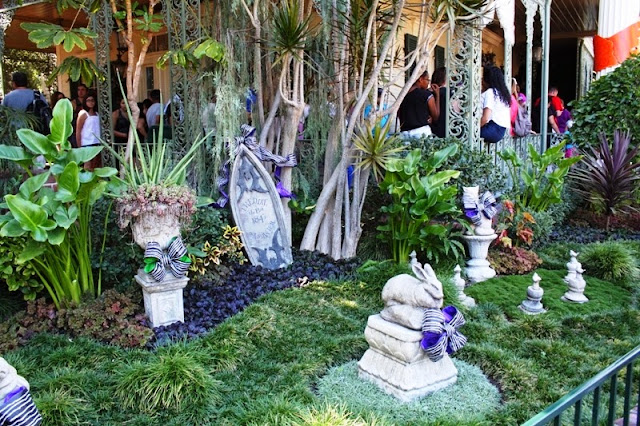 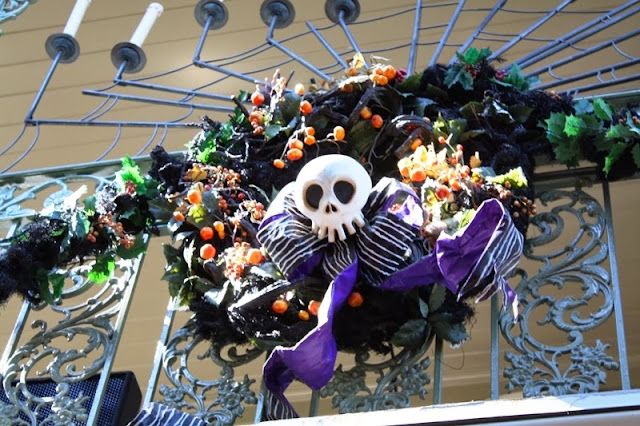 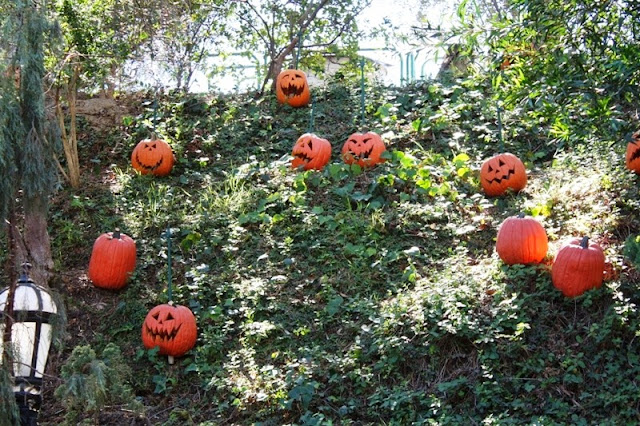 Taking pictures inside is a little tricky, but here is one I was able to snag.  This is towards the end.  Oogie Boogie takes over where the Hitchhiking Ghosts usually hang out. 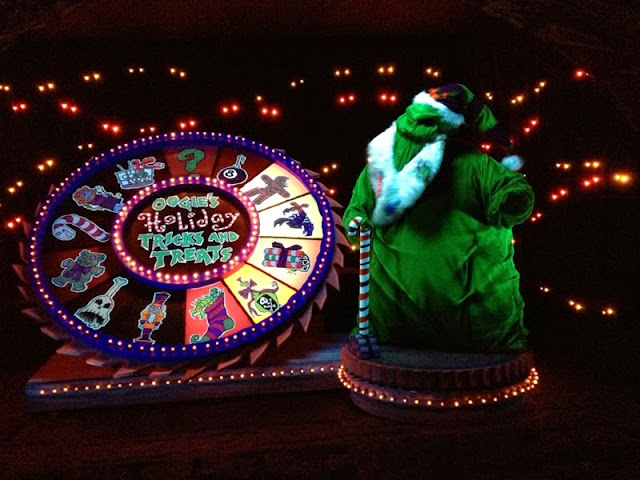 In 2007, Disneyland added a second attraction overlay for Halloweentime, with Space Mountain becoming Ghost Galaxy.  Scary (no, seriously scary) supernatural images are projected onto the black walls of the dark attraction.  They seem to pop out of nowhere and are usually accompanied by a loud WHOOSH or some other kind of creepy noise. 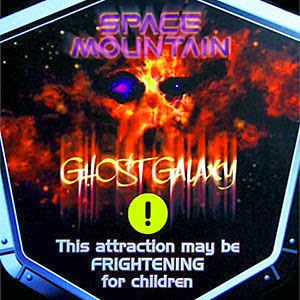 At night, eerie colorful images are projected onto the Space Mountain facade.  Truth be told, I’m not a huge fan of Space Mountain, but I could watch the colors all night long.

And a Halloweentime at Disneyland post is not complete without mentioning the TREATS!  This year I was excited to see cake pops!  Classic Mickey and Jack-o-lantern Mickey … 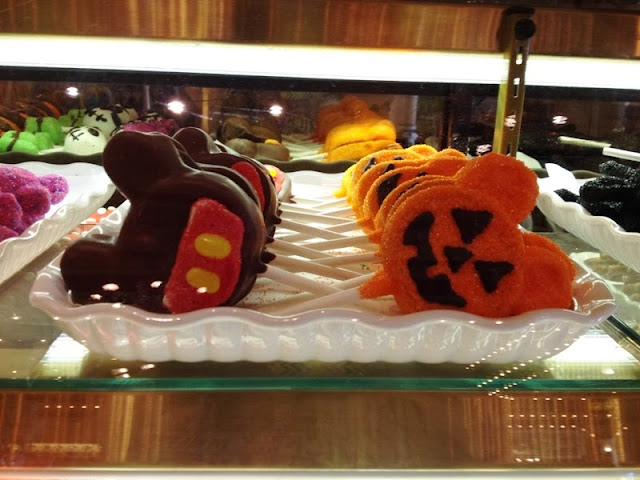 Cheshire Cat and Jack Skellington pops … (Can’t deciper the blue, orange, and green one … any guesses?) …  *EDITED TO ADD* The popular opinion is that it’s Goofy … okay!  Not their best work, IMO. 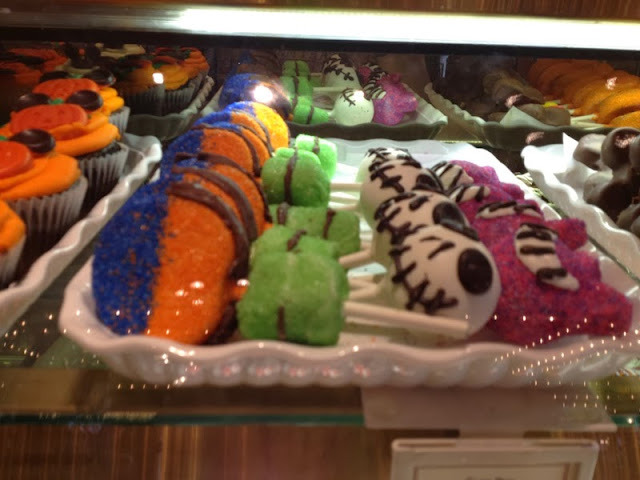 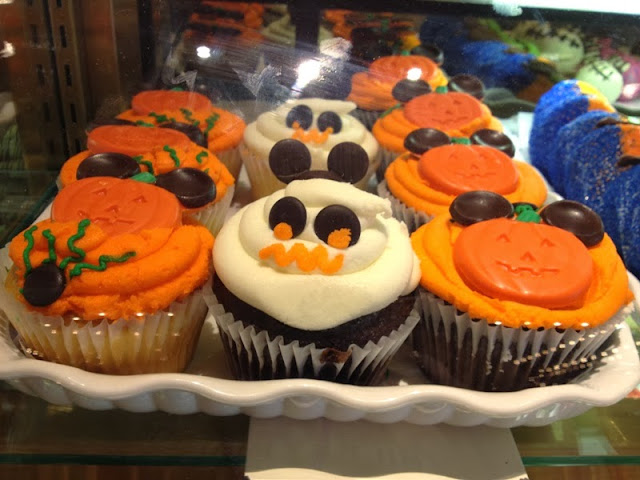 It’s not the best picture, but of course there are special candy apples for the holiday. 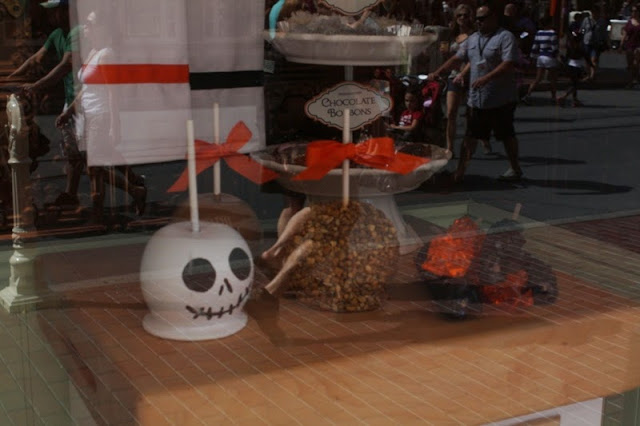 Last but not least – don’t forget the merch.  World of Disney has a huge display of shirts, mugs, and containers perfect of holding candy right at the entrance. 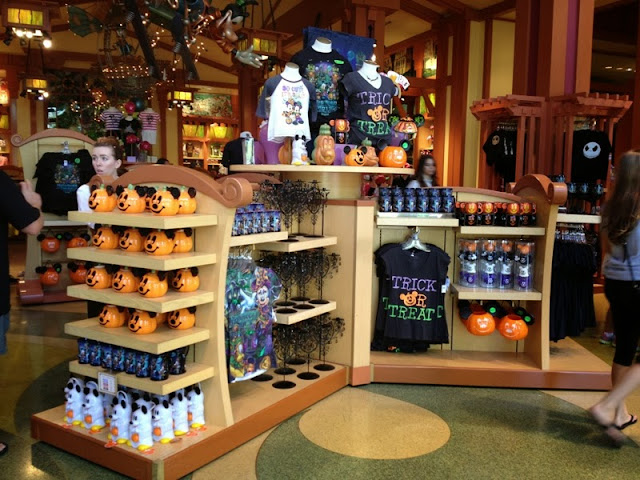 ***
Have you experienced Halloweentime at Disneyland?  What’s your favorite part?