In case you’ve been living under a mossy Troll rock lately, Frozen is all the rage right now. There are Frozen birthday parties happening DAILY across the USA, I bet. But I was bowled over when I found out that Kate threw this Frozen birthday party for under $100 for her daughter’s 7th birthday. Lots and lots of clever ideas here, and I’m so glad Kate agreed to share them with all of you. Take it away, Kate!

Invitations: For all my kid’s parties I use a photo center like Walgreens to print 4×6 prints of invites I design on the computer. I grabbed a image from Frozen and added the border overlay and text. 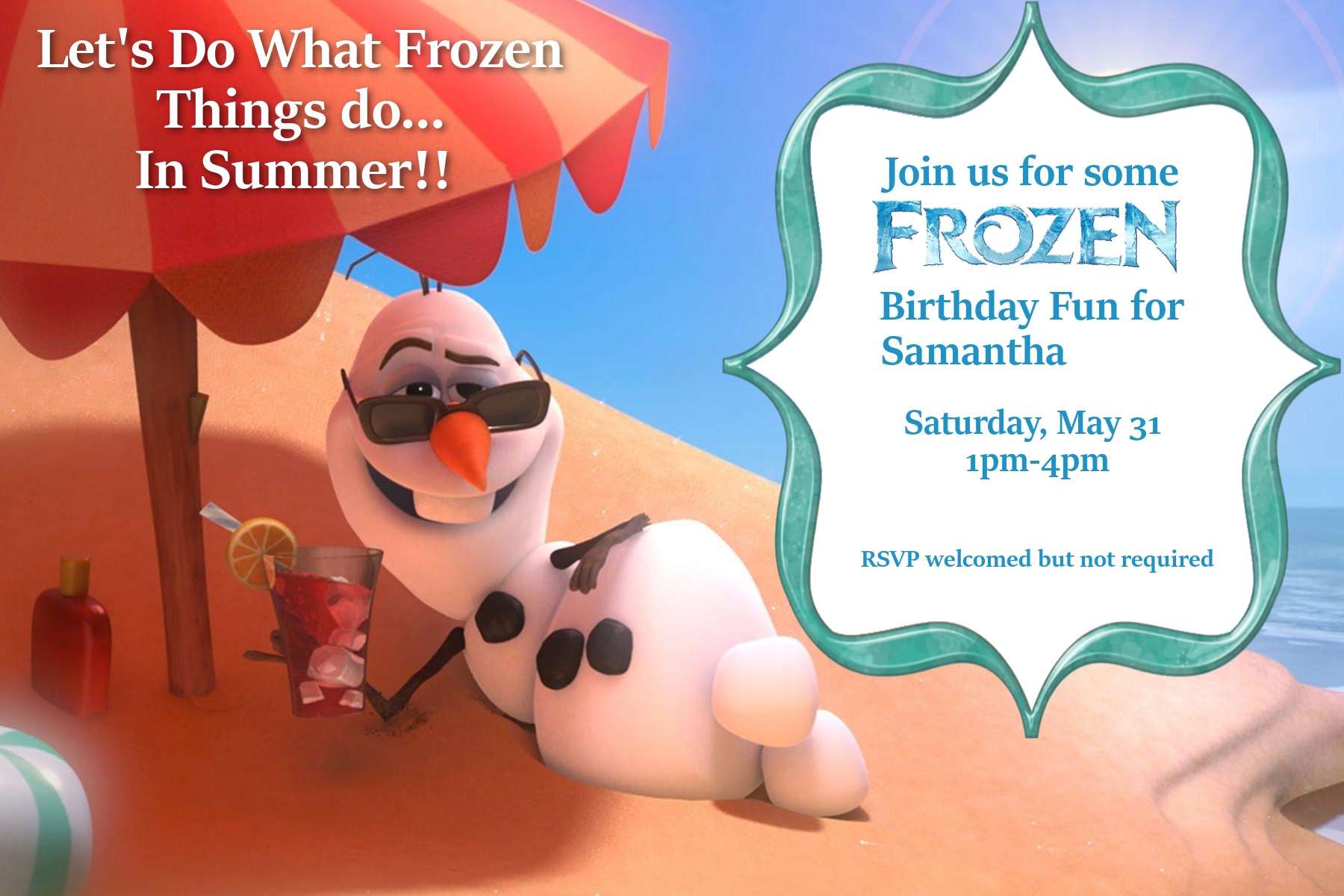 So people knew they were in the right place, we got a Frozen poster from Walmart and put it on the lower part of the front screen door. 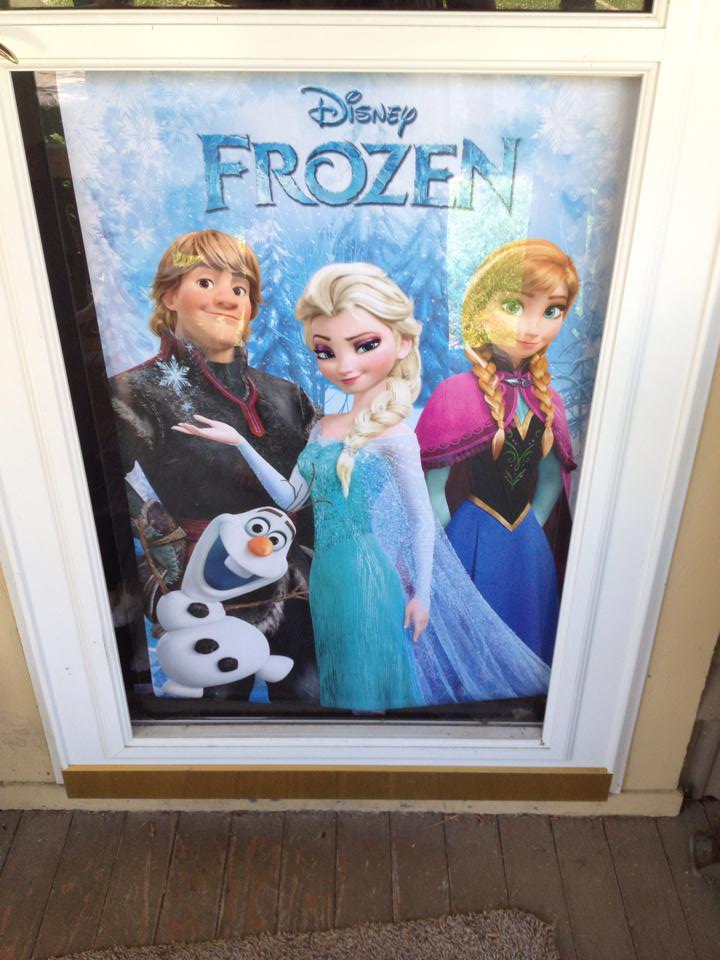 The set up in the front room was Elsa’s ice castle. The living room showed Frozen on the TV and the kitchen was Olaf’s Summer Land. 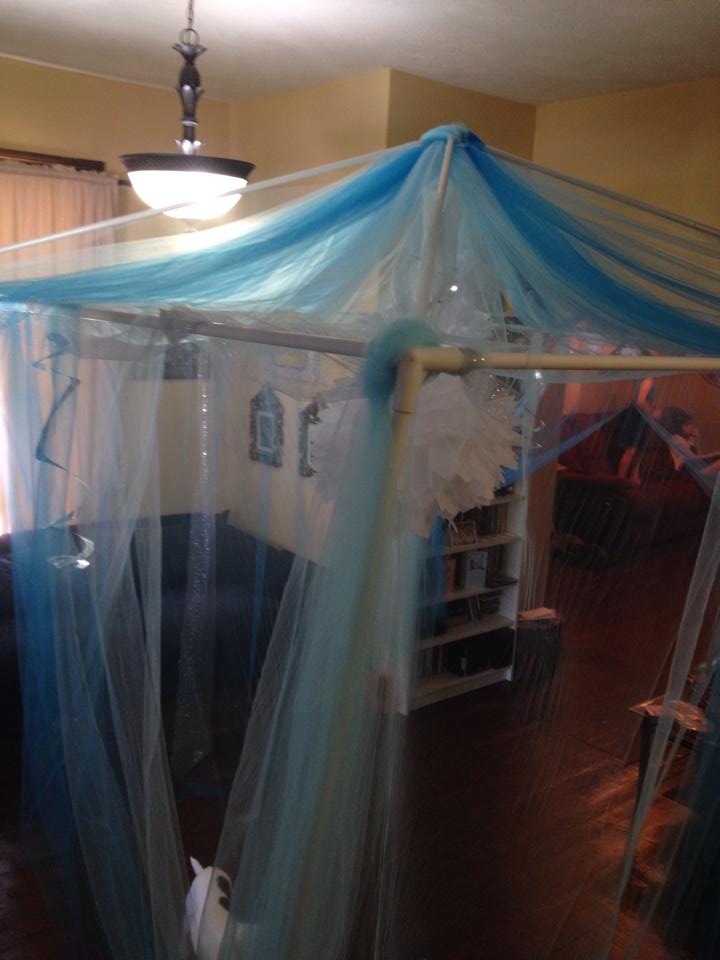 The ice castle was made from a 8×8 canopy tent I got at Menards. I just used the frame and attached tulle to the top and draped it over each side creating three panels on each side. I bought a bolt of light blue tulle on Amazon and turns out it wasn’t enough so I got the darker blue tulle at Hobby Lobby. Happy mistake as the two colors gave it more depth. In the end I used 55 yards. 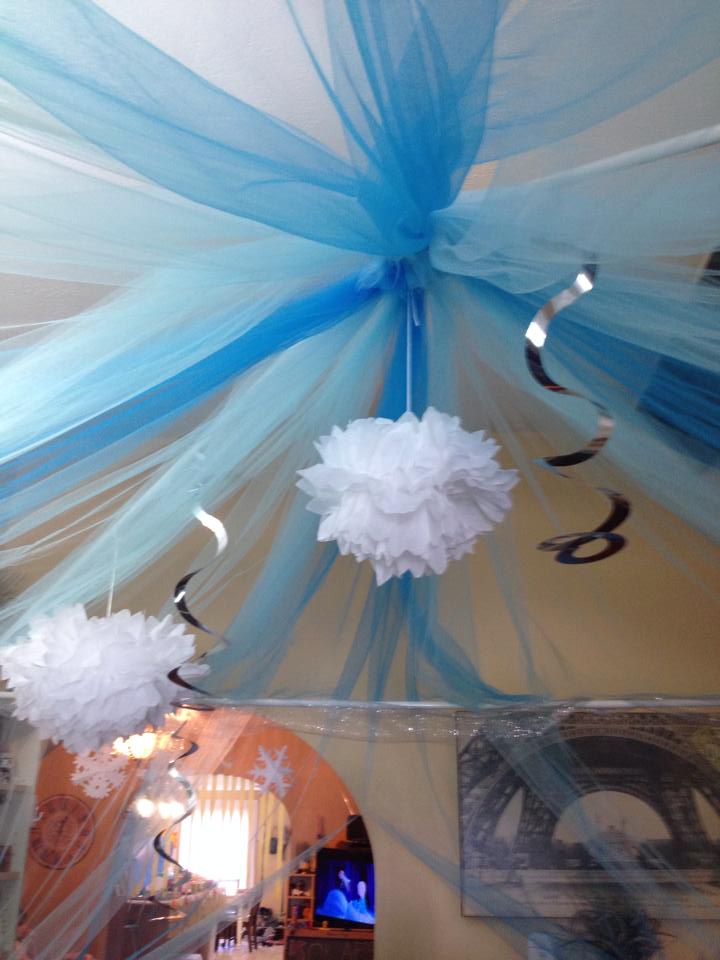 Inside we hung silver danglers and white fluffy decor. I put down pillows and the girls played in the tent. Later into the party we had a snowball fight! The tent kept most of the snowballs in the tent. We even had clear cups they could knock down with their snowballs. You can make your own but we used these (already owned so not part of the budget).

Our chalkboard led the way to Olaf’s Summer Land. 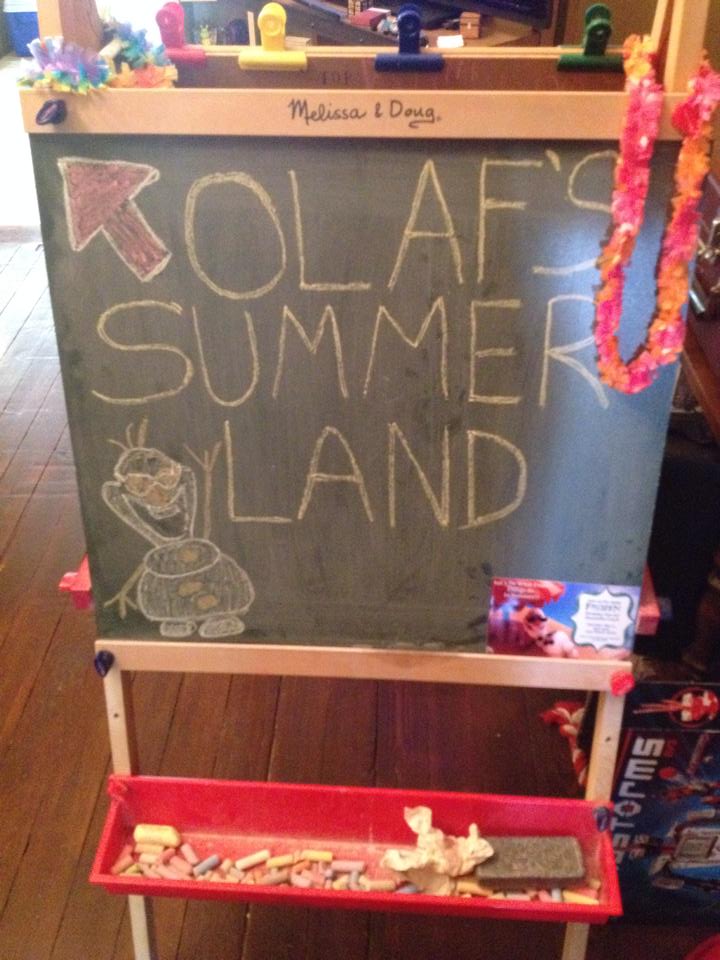 The kitchen was luau/summer themed. We had a grass skirt trim around the kitchen island, paper pineapples, and foil palm tree from Party City. The parasol was from Hobby Lobby. 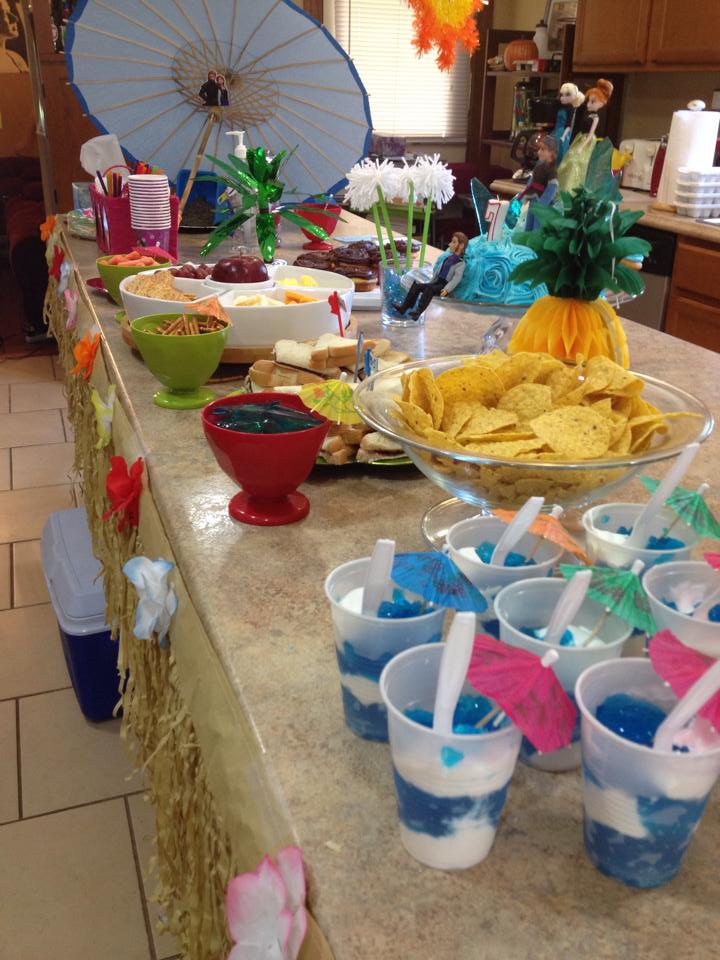 We had a scavenger hunt game to find as many things from Olaf’s Summer song: 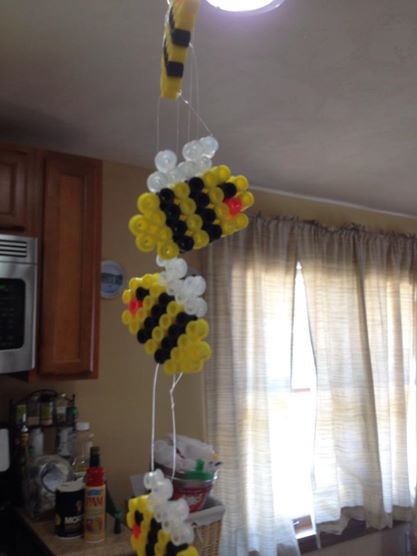 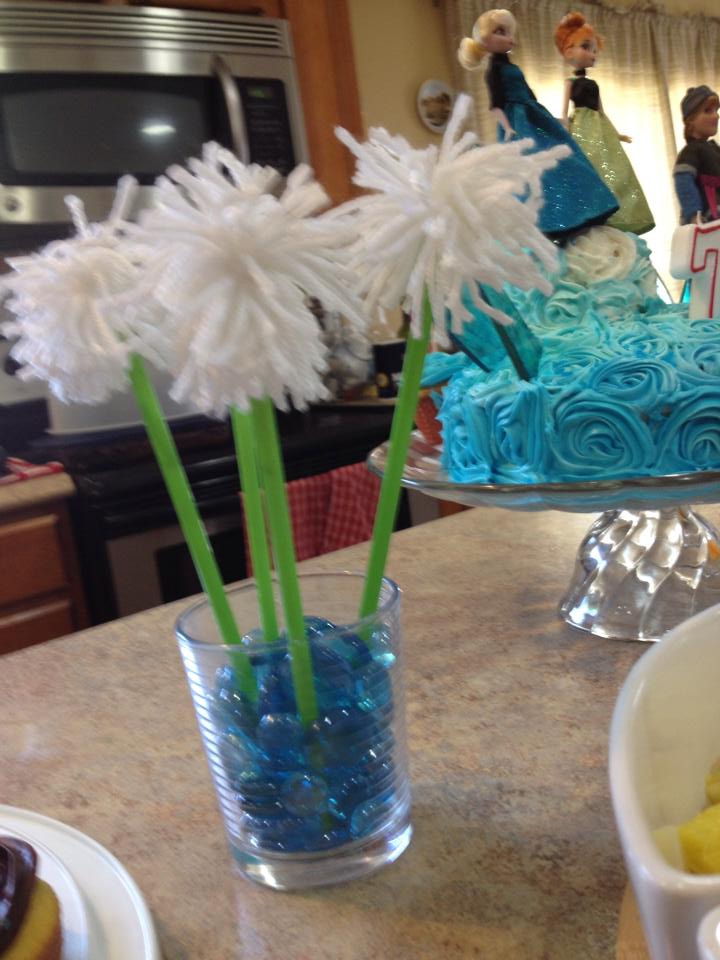 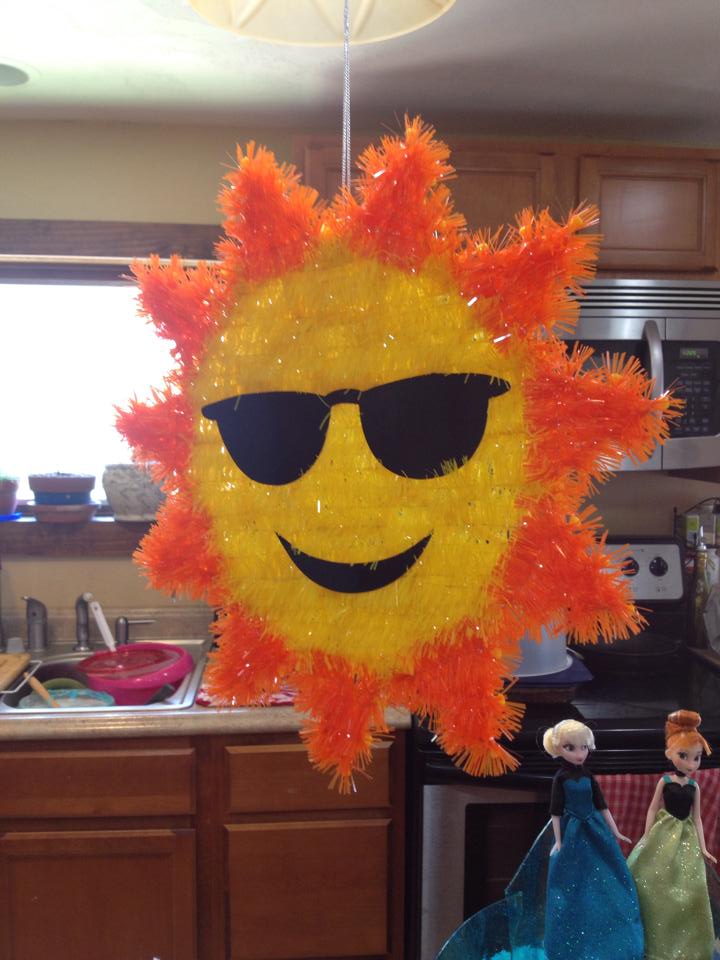 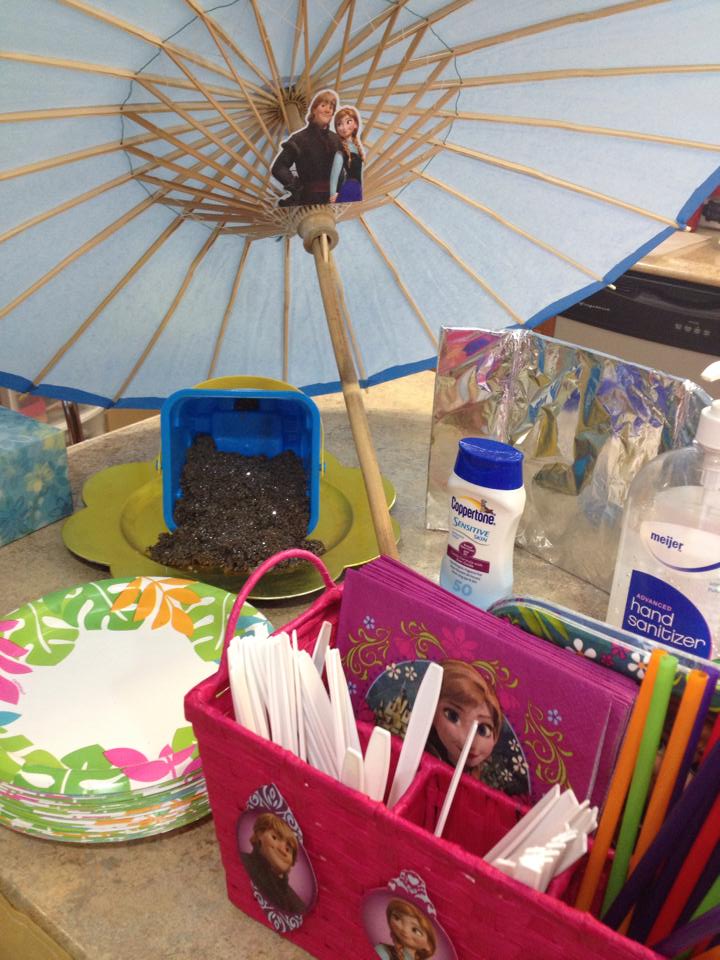 Food: Candiquik and strawberry’s made our “Frozen Hearts.” Blue Raspberry jello with whipped cream decorated with a paper umbrella made “clouds.” Baby carrots and pretzels sticks made up our “Olaf noses and arms.” “Sven’s snacks” were made up of pineapple, grapes, crackers, cheese, and apples. 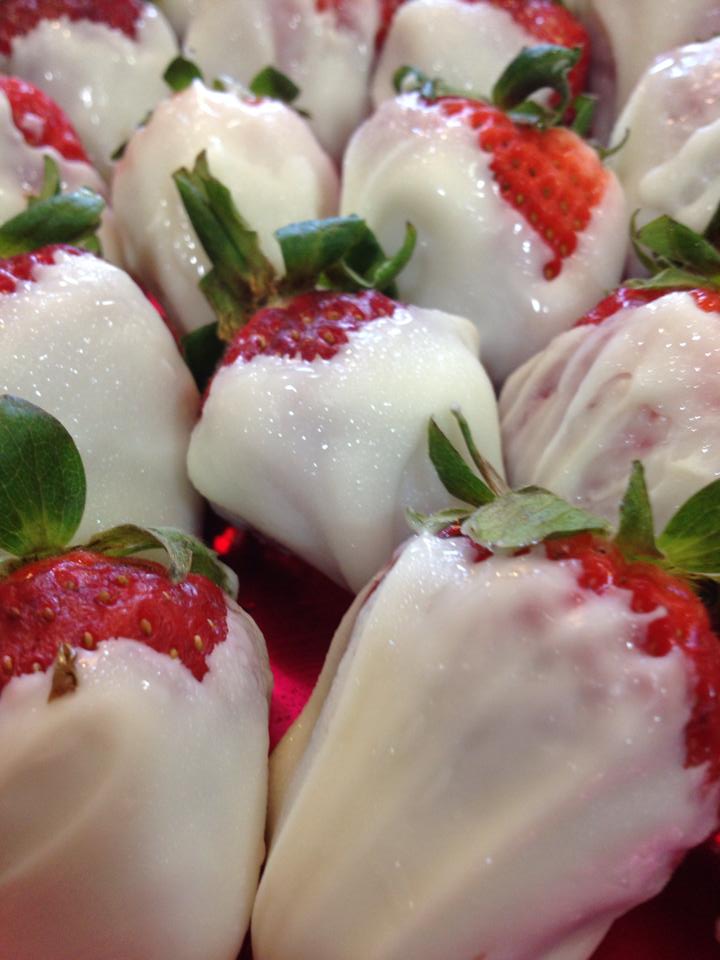 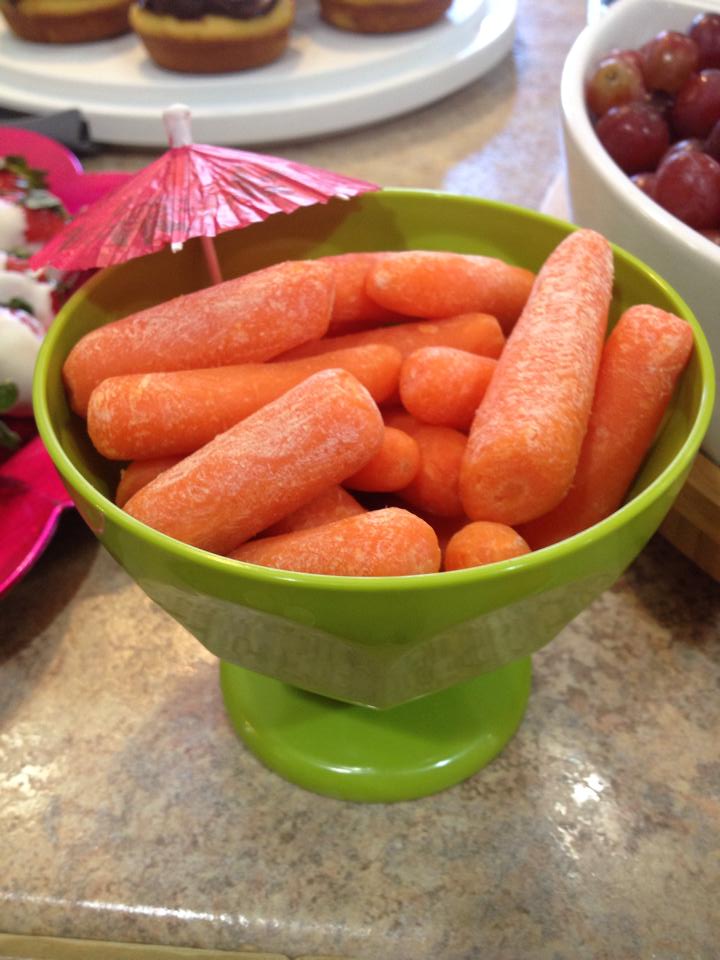 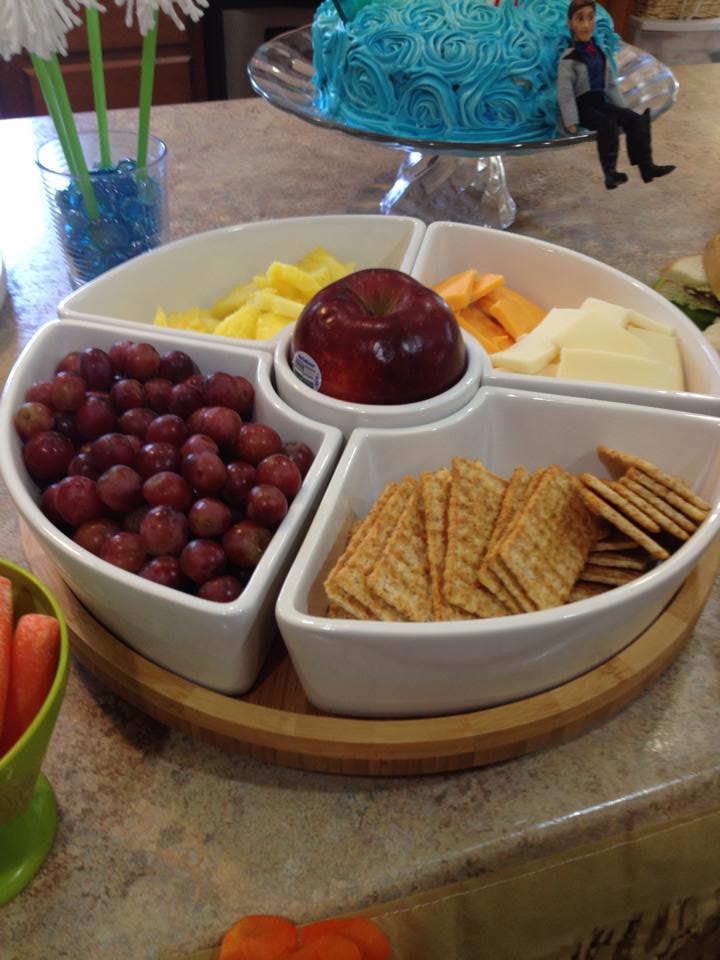 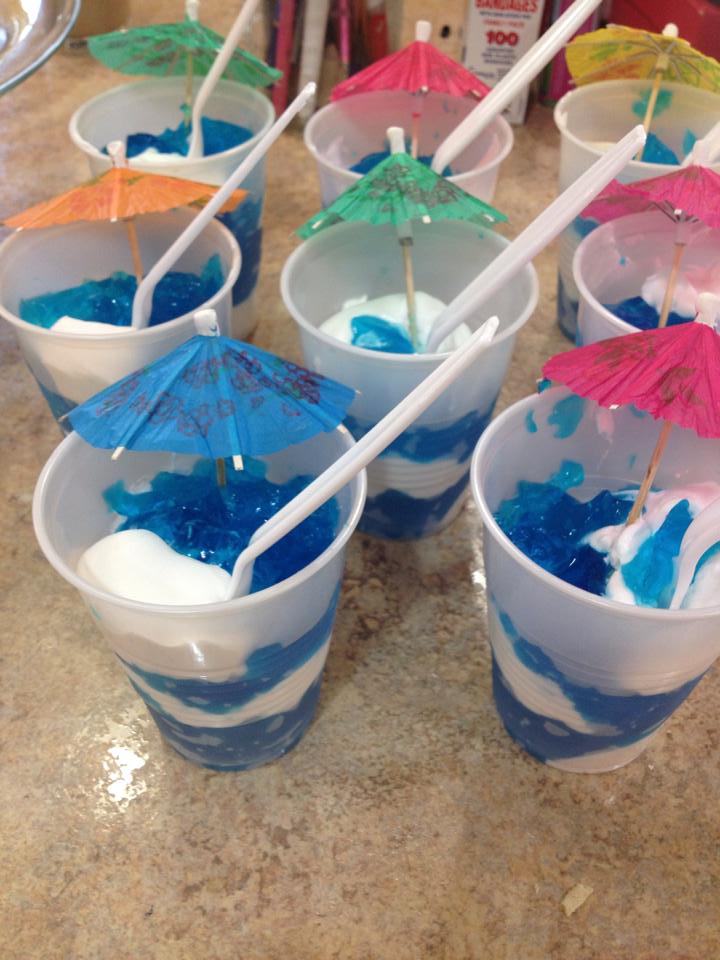 We also had an assortment of sandwiches … because “we finish each others … sandwiches.” Peanut Butter & Jelly, Nutella, and Hawaiian ham and provolone. 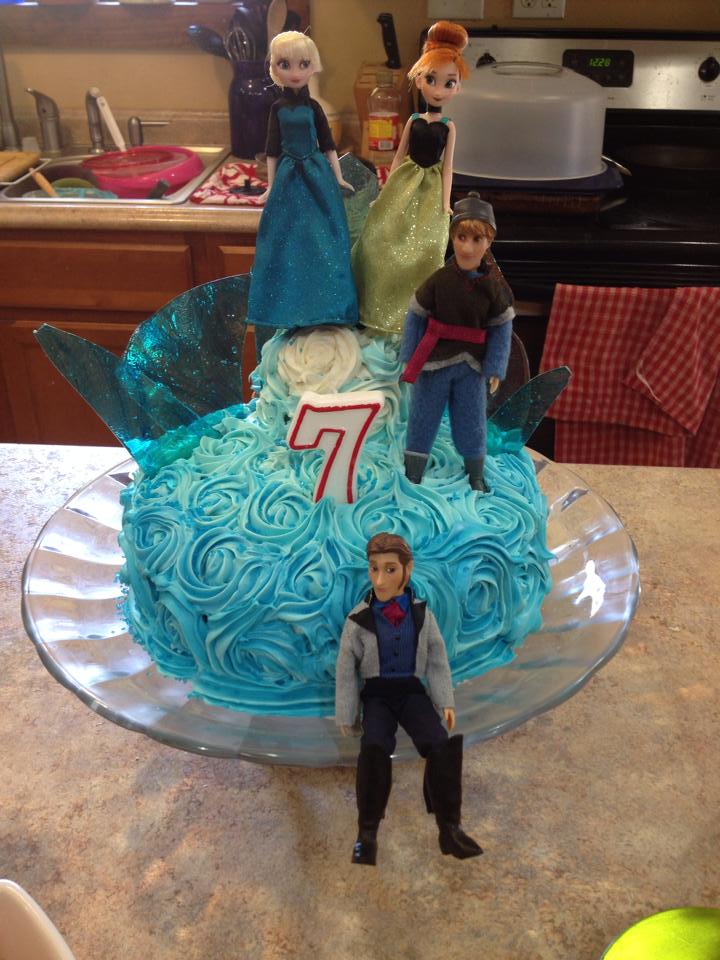 Cake: My daughter saw a similar cake on Pinterest and really wanted it. The cake toppers were the hardest to find. My mother waited outside a Disney store for a new shipment delivery and managed to get this set of Frozen dolls (not part of the budget since they were considered a gift). I attached Popsicle sticks to Anna & Elsa’s legs so they would stay in the cake better.

I used two boxes of yellow cake mix. I used 9″ round pans for the bottom and donut pans for the top layer (2 donuts). I frosted the whole thing with vanilla icing for a crumb layer. I then separated the frosting into 4 containers – white, and three blues getting adding more blue food coloring until I liked the contrast in color. I learned how to make roses using a 1M Wilton tip. Here is a video tutorial on making the roses, note I did have to start at the top because I was doing the ombre effect. 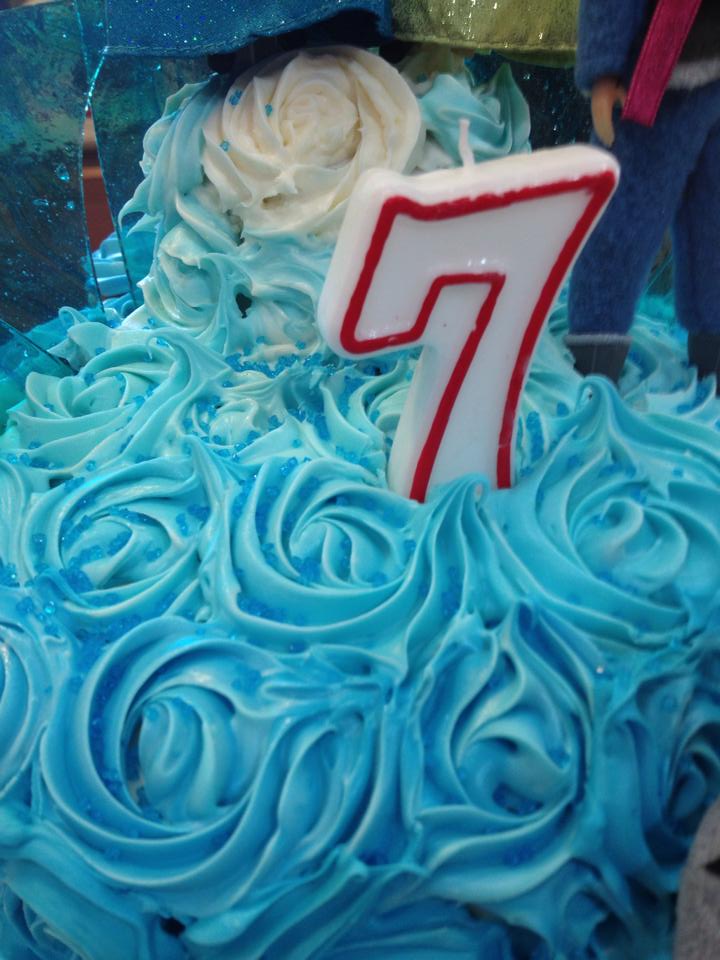 I started with the white and did a few roses on the top then added to the bag the lightest blue, when I was getting low on frosting in the bag, I’d add the next blue. It was actually pretty easy.

I can’t help it, so I added blue sugar sprinkles when all done to give it a little sparkle. 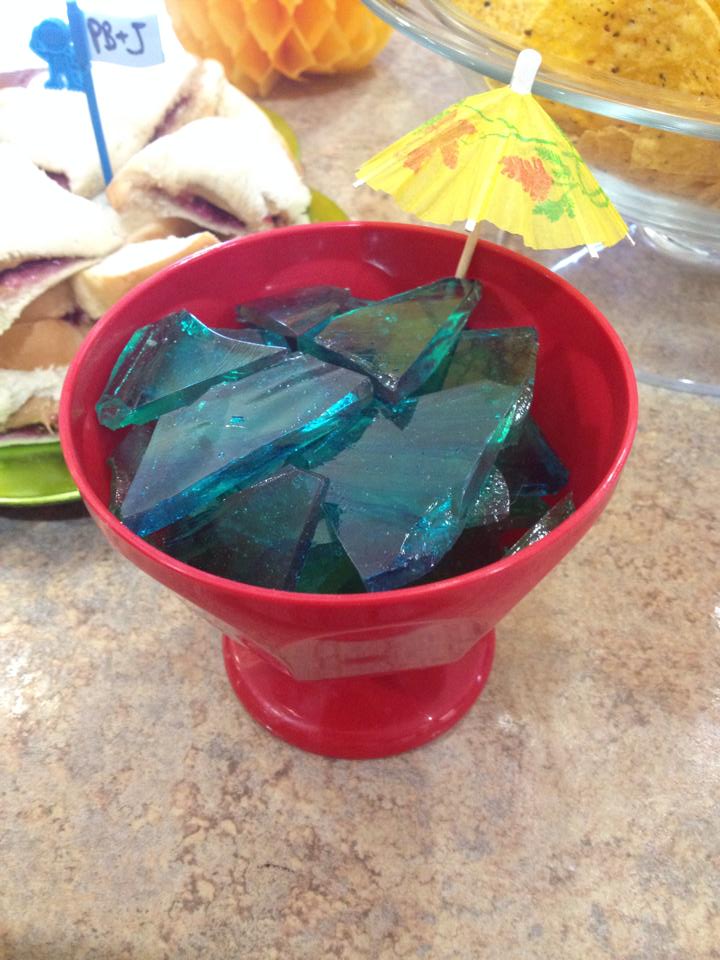 I made sugar glass for the cake backdrop (the above picture is extra sugar glass in a bowl). That was a bit trickier as I have a habit of burning the sugar glass so adding blue actually makes it green. To remedy that I added a lot of blue food coloring to the mix until it was more of a turquoise then when I dumped onto the baking pan with foil I added more blue food coloring and used a wooden spoon to give it the nice blue streaks. The best recipe for sugar glass I’ve found is this one.

… And that was my little girl’s Frozen birthday party for under $100. I hope you like these ideas!