Editor’s note: This article about having a Disney wedding for under $10,000 was originally published in 2013. A lot has changed since then, including wedding and event prices.

As of October 6, 2021, here are the wedding event minimums for the following Disney locations:

While having a Disney wedding for less than $10,000 is becoming increasingly more difficult, I do hope these interviews with real Disney brides can help you with planning your event. Thank you for reading.

How Much Does a Disney Wedding Cost?

One of the big questions that comes up over and over again in the Disney Wedding Blog universe is, “Can we really afford a Disney wedding?”

I interviewed five Disney Brides who had weddings on Disney properties and spent under or just slightly above $10,000 total.  Not just $10,000 with Disney – but around $10,000 total.

I realize that even this amount is a lot for most people (myself included!) but considering the average wedding cost in the US in 2019 was $24,000, $10K is actually considered a “budget” wedding nowadays.

These brides bucked the norm and still got the wedding they wanted.  It’s possible!  Read on and learn … 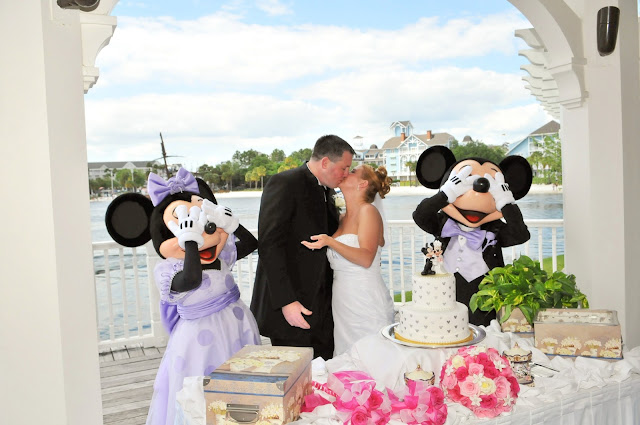 1. Tell us about your wedding.

Ari:  We are Araceli and Stephen. Our locations were The Parkview Terrace and Wisteria Room at Disney’s Grand Californian Hotel at The Disneyland Resort. We only had 20 people at our wedding including us. We spent total on our wedding with our attire and our stay and travel about $6,000.

Beth:  CJ and Beth, we live in Savannah, GA. We were married October 20, 2011 at Disney’s Yacht Club Resort in Walt Disney World. We had 20 people including us. It was an Escape wedding.We spent around $8,000 on the whole wedding.

Melanie:  We are Melanie and Ricky.  We renewed our vows at Disneyland on September 19, 2012 at Disney’s Grand Californian Hotel & Spa for our 12 year anniversary.  We had 18 guests. It was something i always wanted to do since i just love everything Disney so much and every time i would see anything DFTW related i would just swoon and dream that one day i will do that!  =)  So ok the most difficult part, the money we spent to make this happen.  I looked up the different packages available and decided that the Escape wedding package was perfect for us.  Our total costs were $10,647.97.

Deena:  Deena and David Ackman, Luau Beach at the Polynesian Resort at Walt Disney World on November 10, 2011.  We did the Memories Collection, and only the bride and groom were in attendance (no guests).  Total spent on wedding: about $6,000.

2. How much of your total budget do you estimate you spent on Disney’s services?  (I don’t need a breakdown, just your total figure.)

Ari:  We only planned on spending $5000 with Disney for their Escape package.

Beth:  The majority of our wedding budget was spent on Disney services, around $7,000. 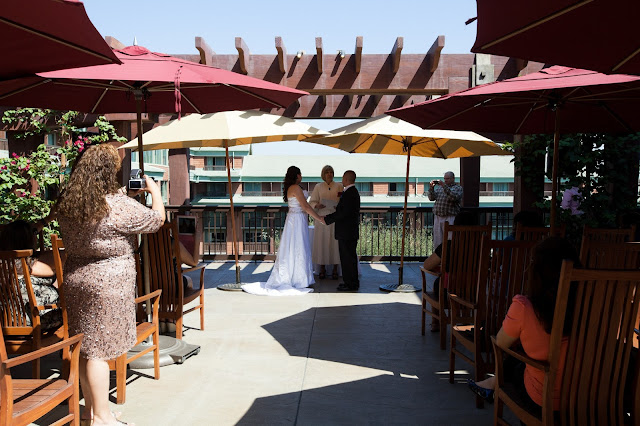 3. When you first started planning your wedding, did you think you would be able to get married at Disney?

Cari:  I have always loved Disney and I always had Disney as an option for a wedding, but never really thought it would happen. Then when we got engaged I started to look into it and realized it wasn’t as expensive as I had thought.

Ari:  No we did not think so because we thought Disney, they are so expensive with everything from water to a shirt, how could we have a wedding and not go bankrupt?

Beth:  I never thought a Disney wedding would have been feasible for us.

Deena:  Yes.  We knew before we were even engaged it would be a Disney wedding.

4. What was the factor that made your realize you could have a Disney wedding?

Cari:  The Escape wedding was totally for us! Very little stress and a small party.

Ari:  We took a trip to Disney for our daughters birthday and saw a wedding on the Magic Kingdom Lawn and I just knew I had to have my wedding at the Disneyland Resort.

Melanie:  After lots of research (12 years!) we came to the conclusion that we can do it and that we deserve it!

Deena:  We were always going to have one, but the Memories package allowed us to abandon our 2012 Wishes plans, and we put together our wedding in 12 weeks to take advantage of the limited time offer. 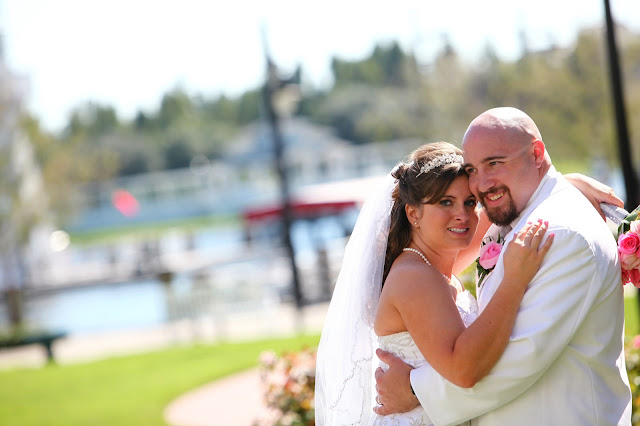 5. Did you have to give up anything that you really, really wanted to stay under budget?

Cari:  The only thing I thought I wanted was a dessert party. The reason we didn’t have it was mainly due to the low guest count we expected. With only having about 10 people there, the cost didn’t seem worth it. I hope to plan one for an anniversary trip in a few years.

Beth:  I really wanted to have the magic kingdom photo shoot but it just wasn’t possible with staying on budget.

Melanie:  We would’ve liked to have Mickey & Minnie of course and I wanted to upgrade the chairs at reception but we decided it wasn’t in the budget for us.

Deena:  Cake, calla lilies, and characters – Basically I wish we could have had the Escape package with some add-ons. 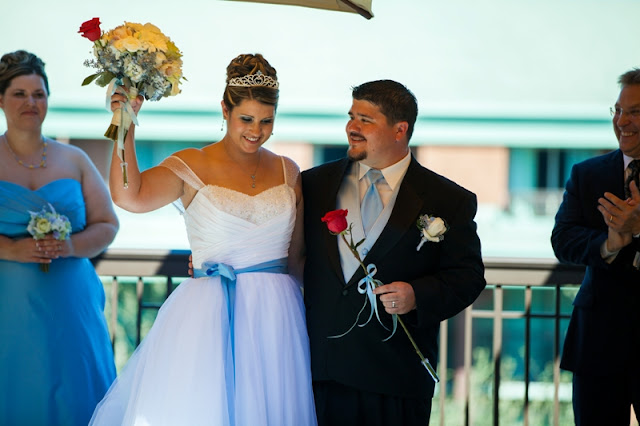 6. What would you say was your biggest cost saver? What other things did you get for cheap or free that helped you stay under budget?

Cari:  One of my bridesmaids did all of our hair and makeup, so getting that for free was awesome. She also made the Mickey flower wand and Mickey Pomander for my flower girls. She did them with silk flowers so the girls had a keepsake. They were a gift from her to the girls, so again I paid nothing. My dress was from David’s Bridal and it was very reasonably priced. I always said I wanted a nice traditional wedding dress and I didn’t care about much else, so I was lucky to find one reasonably priced. Last thing was having dinner at a restaurant rather than a full reception helped a ton as well.

Ari:  I ordered my dress off an online website, which for my dress cost less than $200 and that included shipping. I also found my shoes on sale for $19.99 (and also had a coupon)!

Beth:  My mom bought my wedding dress so that was a huge help. And my husband’s parents gave us $3,000 to help with wedding costs.

Melanie:  Being active duty military helped us out a lot for our hotel stay & tickets!  Also, my sister insisted on doing our invitations for us, so all we had to buy was the invitation kit itself. I made the bridesmaid bouquets & we reused them for reception decor centerpieces.  A fellow Disneyland bride gave me 20 glass slipper candy holders to give out as favors.  It pays to get to know your fellow brides online!  🙂

Deena:  Going with the Memories package and cutting out guests.  I went with a more simple dress, and more simple touches than if I would have if I had guests.

7. Is there anything you would do differently if you could do it all over again?

Cari: Really the only thing is I would have danced with my dad at the cake cutting. We did the “first dance” but I forgot to ask to do the father daughter dance and I am sad about that.

Ari:  I would probably save a little more and have a morning Castle photo session inside Disneyland Park.

Beth: I wouldn’t change a thing!

8. What advice would give to other couples hoping to have a Disney wedding on a budget?

Cari:  I would recommend listing what you want in priority order and look for creative ways to do the items at the bottom of the list first. I really recommend not finding cheaper options for the top three items on the list; to me those are what truly describe how you want your day, so keep those special.

Ari:  Make sure you do the research.  You won’t get a Sleeping Beauty Castle wedding for the Escape price tag.

Beth:  Remember what is important to you and what you really need not just would want. I loved the fact that it was an all inclusive wedding (package).

Melanie:  It can be done. Join online Disney wedding blogs and groups for support, inspiration, and a lot of cost cutting/saving ideas.  Save up!  It might take awhile to save, save, & save some more, but it’s really all worth it in the end.  And if your wedding just isn’t it, have a vow renewal!  Don’t give up on your dream!

Deena:  It’s possible.  You have to decide what is most important to you and then make it happen. 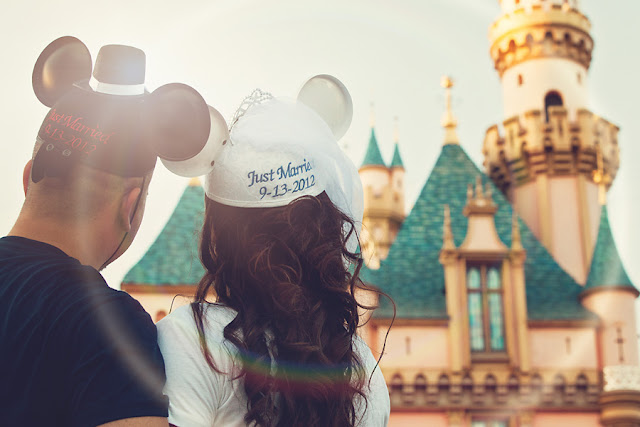 {Ari and Stephen – Photo by White Rabbit Photo Boutique}
***
Originally published in January 2013 and has been updated.