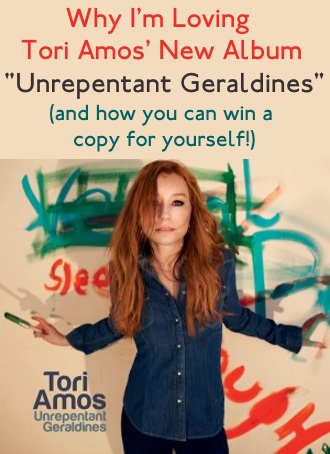 Ever since I posted a couple weeks ago about meeting Tori Amos, one of my idols and heroes, I’ve had a couple people tell me they weren’t familiar with her or didn’t know she was still putting out music since her (arguably) biggest hit single Cornflake Girl waaaaaay back in the mid-1990s. [Side note – I haven’t watched this video in years and was shocked to see the same painting featured in Frozen – “The Swing” by Jean-Honore Fradonard!] So when Universal Music Classics approached me with a chance to give away a couple copies of her CD, of course I had to agree! She is my favorite musical artist after all. And aside from family and my husband, she’s the biggest influencer in my life, I think.

If you like, you can go back and read my post from a couple weeks ago, detailing my meeting with her (for the first time!) and how I made a fool of myself, as well as attending two concerts, one from the front row! I also wrote a little bit about why Tori means so much to me, so I won’t rehash that here. All you really need to know is her music helped shape and guide me, led me a way from a really dark place and gave me new hope for the future, and I really don’t know where or who I would be if I had never discovered her back when I was 12 years old.

It has been 23 years since Tori’s first major album release and her catalog now includes 14 studio albums, 40 singles, and one musical! In the past she has played solo on the piano, with a guitarist and drummer, and even with a string quartet. She tried some new stuff for a while, which was awesome, but she’s back in her best form which is just her and a piano. “Unrepentant Geraldines,” in my opinion, is her strongest album since “The Beekeeper” in 2005. I anxiously awaited the first single from UG, “Trouble’s Lament” and the moment I heard it, I knew this album was going to be an instant favorite.

Her second single from the album is “Wild Way,” a gorgeous song about the intricacies of love. It’s now one of my top ten favorites from her, I think. Here she is performing it on Conan (just down the street from where I live!). I saw her perform this live in San Diego and I sobbed through the whole thing.

But my favorite song on the album (right now, it changes weekly, it seems) is “Promise.” It’s a beautiful duet between Tori and her 13-year-old daughter, Natashya. Tash has appeared on two albums before this one, but this is the first REAL duet. It’s a gorgeous song between a mother and daughter, but there’s a lot of lines in there that relate to lovers, or best friends. It’s just a lovely song; I can’t get it out of my head. You can watch the video below.

Tash is a natural star, I think! I had a chance to chat with her at the Los Angeles show (she was sitting in the row in front of me!) and she was a total sweetheart. Very down-to-earth and mature beyond her 13 years. I told her I’m waiting anxiously for her solo album! 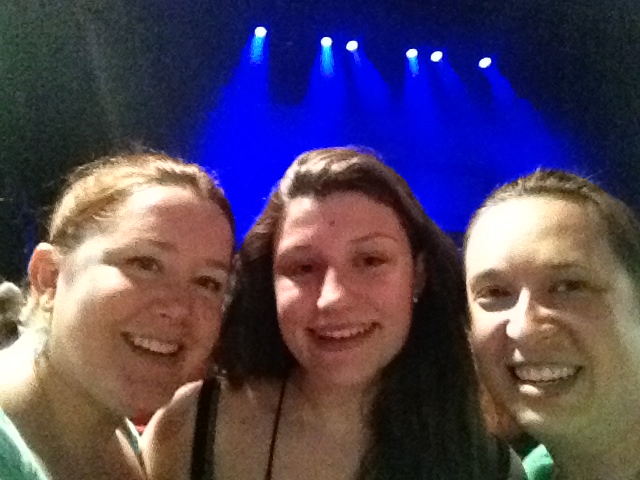 My friend Amy, Tash, and myself. Don’t mind the crazed look on my face!

Intrigued about Tori’s latest album yet? Well, Universal Music Classics is generously giving away two copies of “Unrepentant Geraldines” to two (2) lucky winners. Just use the Rafflecopter form below to enter. The giveaway ends Thursday night, August 14, 2014 at midnight Pacific time, and two winners will be chosen and notified on Friday, August 15. If you’re new to Tori’s music or maybe haven’t listened in a while, I think UG would be a good album to jump in. It’s fairly mild compared to some of her older releases (calming down a bit as she gets older, perhaps?) but her voice and talent on the piano are still strong!

FINE PRINT: NO PURCHASE NECESSARY. Sweepstakes ends Thursday August 14, 2014 at 11:59pm Pacific time. Open to Legal Residents (18 years of age or older) of the US only. Prizes cannot be shipped to PO Boxes. Prizes cannot be substituted or exchanged for cash value. Winner will be selected by Random.org via Rafflecopter and be notified by email on Friday August 15, 2014. The odds of winning depend on the number of entries. Winner will have 48 hours to respond with your mailing address before a new winner is selected. Please note Budget Fairy Tale and Mindy Joy Media are not responsible for sponsors that do not fulfill their prizes. I have represented each sponsor with the expectation they will fulfill their prize and in a timely manner. I will contact the sponsor regarding your prize(s). The sponsors, in most cases, are shipping their items to you directly. I will make every effort to assist you in obtaining your prize. If there is an issue with a sponsor, please notify the blog you won a prize from within 30 days for assistance, after that we may be unable to assist you. Mindy Joy Media is not responsible for lost/undelivered email, typographical errors, technical failures, etc. The product offered for the sweepstakes is free of charge, no purchase necessary. My opinions are my own and were not influenced by any form of compensation. Facebook and Mail Chimp are in no way associated with this sweepstakes. By providing your information in this form, you are providing your information to me and me alone. I do not share or sell information and will use any information only for the purpose of contacting the winner. By providing your name, you agree your name will be mentioned in a blog post announcing the winner. No other information aside from your name will be shared. Prizes not claimed will be retained by the sponsor. VOID WHERE PROHIBITED.

Good luck, and I hope you enjoy “Unrepentant Geraldines” as much as I do!