Tomorrowland opened in theaters this weekend, taking the #1 spot at the box office, and to celebrate Disney has shared these printable activity and coloring sheets, as well as some fun facts about the movie. I love reading behind-the-scenes stuff like this, and it has actually given me a new appreciation for the production of the film! And if you missed it, here is my movie review. 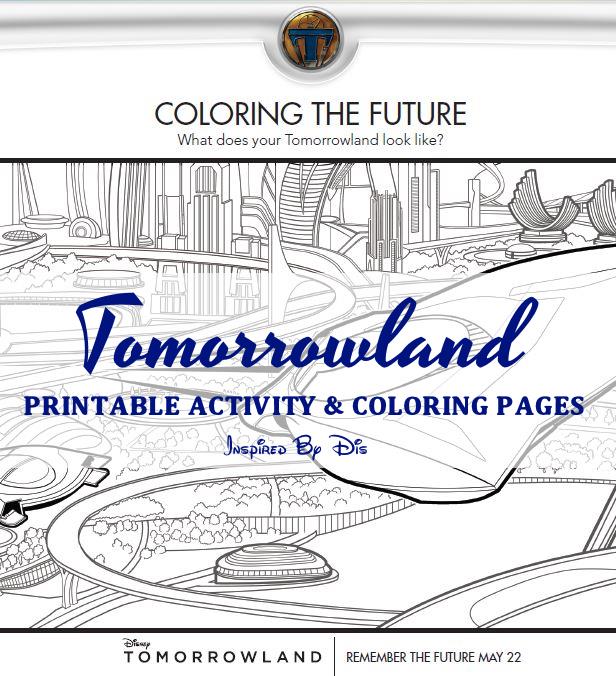 • Director/writer Brad Bird is no stranger to the world of Disney and it isn’t just from working on his previous films. When he was 11, Bird developed an interest in animation and over the course of three years he finished a 15-minute animated film that came to the attention of Disney Animation, who offered to assign a mentor — the famous Master Animator Milt Kahl — to the then 14 year old. Bird stayed with a family friend in Los Angeles to take advantage of the once-in-a-lifetime offer.

• When the concept of “Tomorrowland” was just percolating in writer/producer Damon Lindelof’s mind, Sean Bailey, president of production at Disney told him about a box that had been discovered accidentally in a closet at the studio. The “mystery box” contained all sorts of fascinating models and blueprints, photographs and letters seemingly related to the inception of Tomorrowland and the 1964 World’s Fair. Lindelof imagined that these findings were a guide to a secret story that nobody knew about; a place called Tomorrowland that was not just a theme park but existed somewhere in the real world. This became the jumping-off point for the story of “Tomorrowland” that Lindelof would later develop with director/producer Brad Bird and executive producer Jeff Jensen.

• In recreating the 1964 World’s Fair for “Tomorrowland,” filmmakers were lucky to find that one of the iconic pieces, the Unisphere, was actually in Flushing Meadows, New York, standing outside of the USTA National Tennis Center. The huge globe’s fountains are still in place as well as the gardens. The filmmakers dispatched a photographer to New York to take photos so that they could use the real images as a composite element in the scenes.

• For the 1964 World’s Fair, the Walt Disney Company created three rides, the It’s a Small World ride being the one we remember most. Though quaint by today’s standards, back in 1964, Carousel of Progress and Great Moments with Mr. Lincoln were revolutionary in how they used robotics and ride technology to create a thematically rich experience.

• When it came to creating a city built by visionaries with advanced technologies, filmmakers knew it had to look like one and finding such a place was not an easy task. At first it seemed as though the whole of Tomorrowland would have to be built from scratch, an expensive and time-consuming proposition. But then in a series of wonderful coincidences, Tom Peitzman, the visual effects producer and the film’s co-producer, stumbled upon a car commercial early on in production; the location in the commercial looked so futuristic that he recorded the ad on his phone and brought it to director Brad Bird. The location turned out to be the City of Arts and Sciences in Valencia, Spain, and was designed by Santiago Calatrava whose work was already serving as an inspiration for production designer Scott Chambliss. The discovery also dovetailed with director Brad Bird’s preference for physical locations over virtual sets.

• For the filmmakers, the bizarre memorabilia emporium, Blast From the Past, was a fun—and nostalgic—set to create. Set decorator Lin MacDonald spent months curating the extensive display of collectibles, consisting of thousands of pieces, both purchased and manufactured by the production, and many originals—some from Brad Bird’s own collection. There are shelves and shelves of comic books and items such as classic sci-fi movie posters, an original Luke Skywalker action figure from the 1970s, and even items from “Space 1999.” The production design team literally built a store and set it in the middle of a sound stage.

• Designed by illustrator Tim Flattery of “Men in Black” fame, the plasma ray guns used in the comic-book store scene feature interactive light that spills out into the environment, adding to their air of authenticity. The guns were built with a very small but powerful wireless battery pack that fits on the end. Upon the actor hitting the trigger, the gun throws interactive light out the front. When the “plasma” is empty, a red light goes on and, as the gun recharges, the lights turn blue again.

• One aspect of working with the child actors, Thomas Robinson (Young Frank) and Raffey Cassidy (Athena), was that if you take an eleven-year-old and start them on a movie in the summer and don’t finish the movie until mid-winter, chances are they going to grow, and that includes their teeth. When Raffey arrived in Vancouver ready to start work, she was missing teeth, so she had to get fakes made before the start of principal photography. Then Thomas started losing his teeth one by one. So the kids spent a lot of time getting “flippers” made, which are temporary, removable teeth.

• Young Raffey Cassidy, who plays Athena, underwent training in swimming, gymnastics, wirework and martial arts, which was the primary focus of her training as her character kicks some serious butt in the movie.

• The Bridgeway Plaza took six months to build and was about half the size of a football field. The set was so enormous that no sound stage existed that could house it and considerable height was also required for the intended aerial work above the set and for the cranes big enough to hold the lights required to illuminate the set. Adding to the complexity was the fact that the set had to serve different time periods over the course of the script: 1964, when young Frank first visits; 1984, the period in Casey’s pin-induced vision; and 2014, when the remainder of the story takes place. This required six-week intervals between shoots to allow the production design crew time to redress and alter the set for each time period.

• The Bridgeway Plaza set included a fully functional monorail (called the levitating elevated vehicle). Once the monorail was completely built and the lights and glass were put in, it weighed about 35,000 pounds. That meant that the crew had to figure out how to move the hefty monorail—loaded with principal cast—safely down a track that was elevated 16 feet in the air and stop it at exactly the same position time and again. They came up with hydraulic winches that could be shut down very quickly in an emergency and brakes that they could apply whenever they wanted to bring the monorail to a very specific mark to stop, open the door automatically and have the cast walk out.

• The film started principal photography on a farm in Pincher Creek, Alberta, where the filmmakers paid a farmer to grow winter wheat that had a particular shade of amber—director Brad Bird’s vision of rural perfection. Then the crew moved to a farm in Enderby, in British Columbia’s Okanagan, to shoot the Walker farm and its cornfields, also grown specifically for the production.

• In addition to sets in Spain and Canada, locations included the “It’s a Small World” ride at Disneyland Park in Anaheim, Calif., a beach in the Bahamas and a second unit shoot in Paris. In total, the film had over 90 different combinations of sets and locations, and moved ten times.

• Costume designer Jeffrey Kurland had to dress almost 400 extras in 1964-era attire for the Hall of Invention and Unisphere Plaza World’s Fair scenes.

• The 1964 jet pack designed for Young Frank (Thomas Robinson) was a feat of engineering and imagination. It has 40 different fasteners on the backpack frame and has mounts for Electrolux vacuum cleaners on the sides. Control cables operate the small shovels on the back. Cables run through the jet pack onto the handles so the actor can control it. The jet pack was fastened to a plate and could be easily removed from the frame so that Thomas did not have to walk around with 20 lbs. of jet pack on his back between takes.

• For the props department, creating props for the different time periods of the film—1964, 1984 and 2014—was a challenge. There are different influences and materials that affect the manufacture and design of the props for each era, so every prop needed to be carefully researched and analyzed to make sure the technology and materials they planned to use existed in the time period. Then the filmmakers had to try and find the real parts to make things authentic.

• Filmmakers were thrilled to see a real NASA Maven rocket launch (a probe to Mars) at the Cape Canaveral set location and several of them were able to view the launch from a position closer than the press viewing stage. For the filmmakers, it was a dream come true and symbolized the future that the film inspires.

Have you seen Disney’s Tomorrowland? Did you enjoy the film?