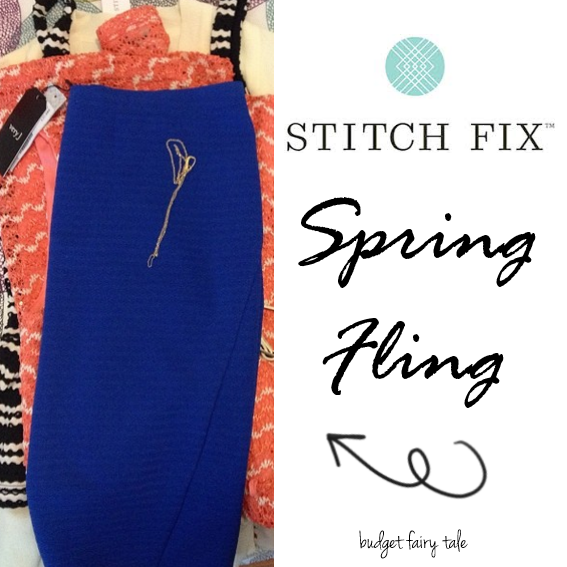 DO NOT ADJUST YOUR SCREENS. You are not having Deja Vu. I have two Stitch Fix posts nearly back-to-back. Here’s why:

When I requested Stitch Fix #3 it had been nearly a year since my last Fix. I put in my request for a new Fix and sat back and relaxed. A couple weeks later I received an email telling me my Fix had been mailed out … to my OLD mailing address. D’oh! I’ve been living at my new place so long, it didn’t even dawn on me that I needed to update it. I quickly sent an email to customer service asking if there was any way to intercept it or update my address. I heard back a couple days later that sadly there was not, but I could check to see if I could have it forwarded. I looked up the tracking number on the USPS site and it said they already attempted delivery and it was being returned to sender!

So about a week later guess what shows up at my door … my ORIGINAL Fix, with the yellow forwarding address label attached. Errg. So I emailed Stitch Fix to let them know my original Fix was NOT sent back, and I had it in my possession. At that point, my replacement Fix had already been shipped. I received it two days later.

So that’s the fascinating story about how I came to possess two Fixes at once. Not great for my ever dwindling bank account but super fun none-the-less.

Receiving two Fixes at once was really interesting. Two different stylists reviewed my one profile and Pinterest boards and chose five completely different items. I really expected the packages to have some, if not all of the same items, like they are chosen by some computer algorithm or something. But then I realized that it’s coded as a completely new Fix, so there wouldn’t be any repeats.

Anyway! On to the Fix!

Eight Sixty – Bobbi Textured Stripe Peplum Top
Really liked this top on me much more than seeing it in the box, but peplum and I do not generally get along. As you can see in the side view photo, I look not just pregnant but full term pregnant.

Very J – Karson Textured Pencil Skirt
I really love pencil skirts and this one was very pretty, but too tight. Difficult-to-walk tight. Also, not sure about that shade of blue. It’s very bright, it’s a “power color” but pairing it with items already in my closet would have been tricky.

41Hawthorn – Bell Solid Sleeveless Tie-Neck Blouse
Very pretty top; I have a dark pink top that is very similar, and I have a couple of white tops that I never wear because I think I look weird in white. I liked it paired with the skirt. I look so grown up!

Ezra – Davina Scallop Stripe Textured Fit & Flare Dress
Loved this dress! The stretchy material made it fit great, the style was very flattering, and there was just the tiniest bit of sparkle woven throughout. But I already have two similar dresses in the same coral shade. 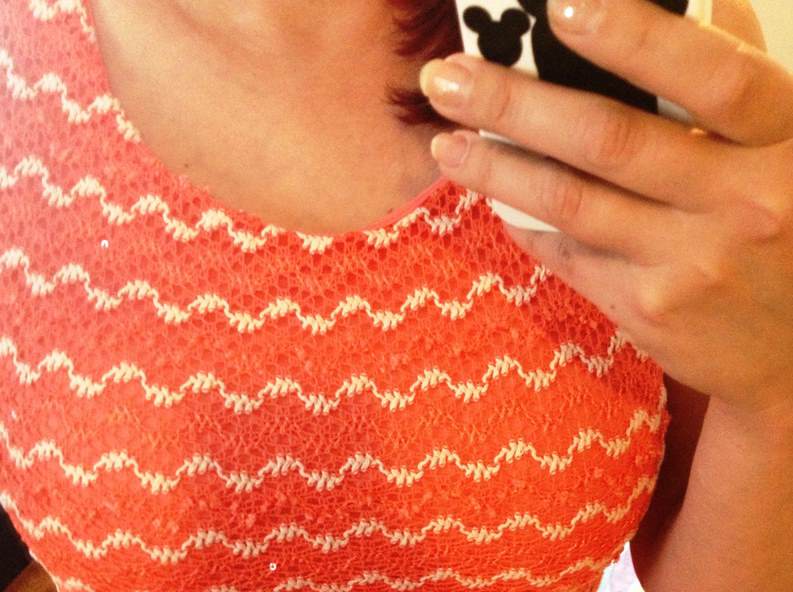 Boob close-up for the benefit of the sparkle. Can you see it?

I paired it with the ivory cardigan from Fix #3 … man, that cardigan was really growing on me!

Kris Nations – Colusa California State Necklace
My stylist wrote that she thought I’d like this because I pinned a couple similar ones on Pinterest … she was right! How adorable is this dainty CA necklace?

So which item(s) did I keep? 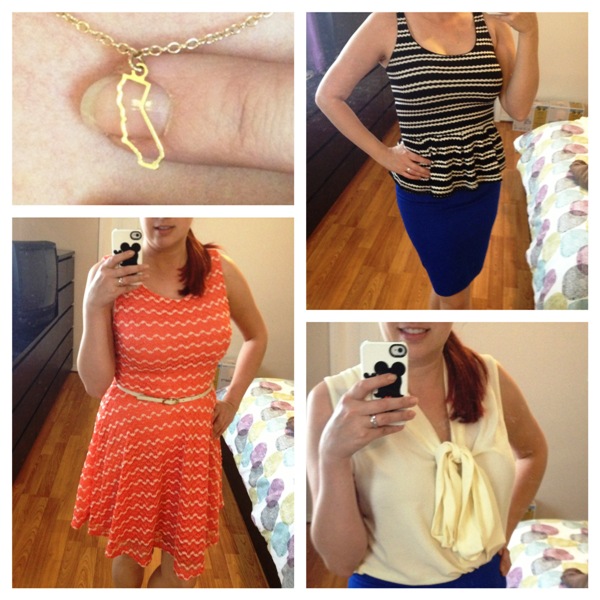 I kept the coral dress! Despite already having A LOT of coral in my closet, when a piece of clothing fits this well, you just can’t pass that up. And at $58 the price was decent – not outrageous like some items I’ve received in the past. If it was any higher priced I probably would have passed on it.

I paired it with the ivory cardigan I picked up at Old Navy and some white booties I’ve had forever, purchased at Hot Topic.

I also kept the California necklace! At $42 it was a little more than I would probably spend on a necklace but I just couldn’t resist it. I’ve worn it every day since it arrived!

What do you think of my picks? What would you have kept?

Want to try Stitch Fix? You can sign up here using my referral link. If you sign up and order a fix, I will get credit I can use towards my future purchases. Everyone wins!