News outlets are reporting a couple had a rogue Disneyland wedding last month. 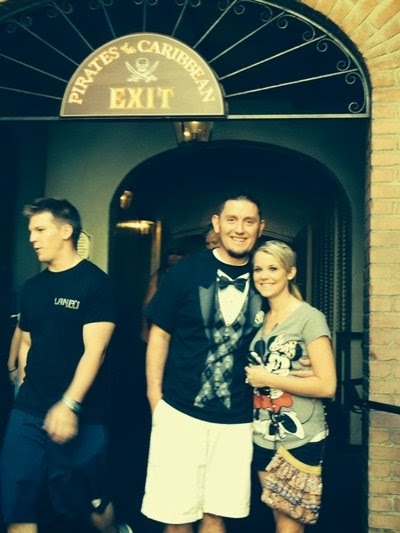 Tory and Nikki Elegante eloped on the Pirates of the Caribbean attraction on September 19 (coincidently “Talk Like a Pirate Day”), 2013.  They were with friends and family and requested their own boat.  After the second water drop, the ceremony began, officiated by a friend.  By the time they reached the cannonball battle scene, they were husband and wife.

Of course, their friends and family were aware of what was about to happen, but Disney was not, because as we all know, rogue weddings inside Disneyland are a strict no-no.  Getting caught could get you thrown in Disney jail … not as fun as it sounds.

But, seeing as how this couple kept a low-profile, wearing t-shirts and shorts for their wedding day, and their “guests” were on their own private boat, not disturbing other guests, is there really any harm?  What do you think?

It sounds like Tory is a massive Disney fan.  Quoted from the article on Yahoo:

“I knew from a young age that I wanted to get married at Disneyland,” Tory tells Yahoo Shine. “It’s a magical escape. The sights, smells, and sounds are how I retreat from the stress of daily life.”

It’s an atmosphere Tory has also re-created in his personal life. His children from a previous marriage even have Disney-themed name: Ariel (“The Little Mermaid”), 12; Belle (“Beauty and the Beast”), 10; and Orlando (the location of Disney World in Florida), 8. He’s also customized his home in a Disney theme: The walls are lined with framed posters of the famous attractions along with photos of him and his family participating in each one. There’s also a Pirates of the Caribbeanthemed-hallway, complete with lantern lights, a custom-built wooden bridge, and a porcelain fountain. The couple also owns wrought-iron mirrors and candles shaped like Mickey Mouse, and the mouse’s head is stamped repeatedly into the sheetrock in the walls. There’s even a mini-Monorail on the second floor.

It doesn’t stop there. The couple’s master bathroom is decorated in an Adventureland theme, painted in the same rustic yellow as the park, and is outfitted with a waterfall shower head, tiki posters, and Disney towels. The kitchen has Disney-themed utensils and the couple is saving up for matching plate sets. Tory even decorated Nikki’s 4-year-old son Kaiden’s room in a “Buzz Lightyear” theme.

Tory owns 15 Disney watches and has a large tattoo on his back of Cinderella’s castle under exploding fireworks, entwined with three of his children’s names. The couple drives cars with personalized Disney-themed license plates.

“I thought he was crazy when we first met, but now I’m used to it and love him for it,” Nikki tells Yahoo Shine.

You may recall reality TV star Holly Madison shut down Disneyland to marry her husband at the restaurant inside Pirates of the Caribbean earlier in September.  Their wedding likely cost just a tad more than Tory and Nikki’s secret elopement.