Today we have a very special wedding and a first for the blog – it’s our first Downtown Disney wedding!  Jaime and Sean planned their budget wedding at Ralph Brennan’s Jazz Kitchen in about three months when unexpected circumstances arose.  Jaime tells her touching story below.  I hope her story will inspire anyone who dreams of a Disney wedding on a less-than-Disney budget.  Thank you, Jaime! 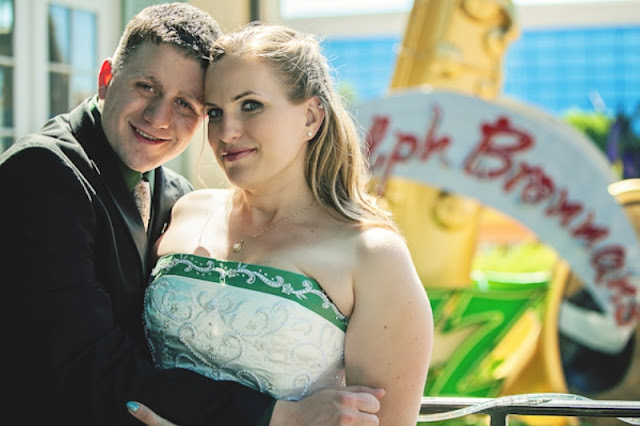 Sean and I met online before meeting online was ‘cool’. We met online in the mid 1990’s and became fast friends. There was just one big problem. Well, 2 problems. At the time, he was a 16 year old in Michigan, and I was a 19 year old in Southern California. Neither of us were in a position to uproot our lives and see if this budding romance had wings, so we settled on being friends long distance. Emails turned into about 13 years of near-daily phone calls. Finally, we were both at a place in our lives where we knew we had to meet face to face and see if this was really the love of a lifetime, or if we were just really good friends. Sean had recently joined the US Navy Submarine force, so I took the flight out to his base for a weekend. We both knew that if this wasn’t like kissing a sibling, one kiss would probably tell us if we were the love of each other’s lives, or just good friends.

Lucky for us, it was nothing like kissing a sibling – and the rest is history (and a lot of frequent flier miles). 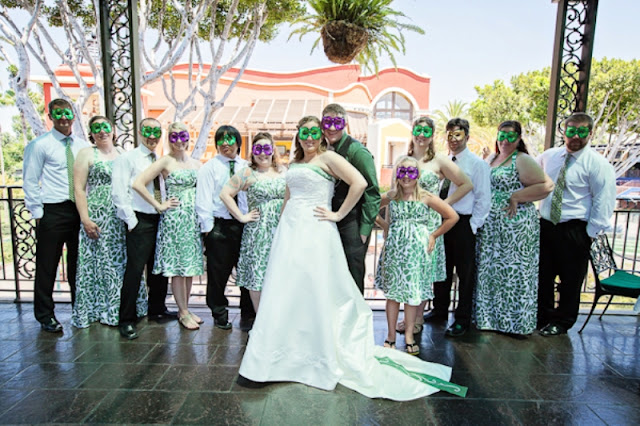 As with many military couples, we had trouble planning a wedding. At first, we tried to book a wedding at Shades of Green, the resort in Disney World exclusively for Military folks. But the Navy canceled that date. So we tried to book it for the Animal Kingdom later in the year. But the Navy canceled that date as well with a deployment. At this point, we did what many military couples did and eloped just to get the paperwork out of the way before he could deploy. (Due to the nature of his work, those not legally bound are unable to contact him while deployed or take care of things at home in his stead, so this was a necessary step – and a very common one in the military world.) Just as we were setting up to reschedule the wedding again somewhere in Florida, we got the news that my dad was sick. He was diagnosed with Stage 4 Pancreatic Cancer and was given the prognosis of 6-11 months to live.

That threw us into high gear. Time was no longer on our side, and neither was distance. 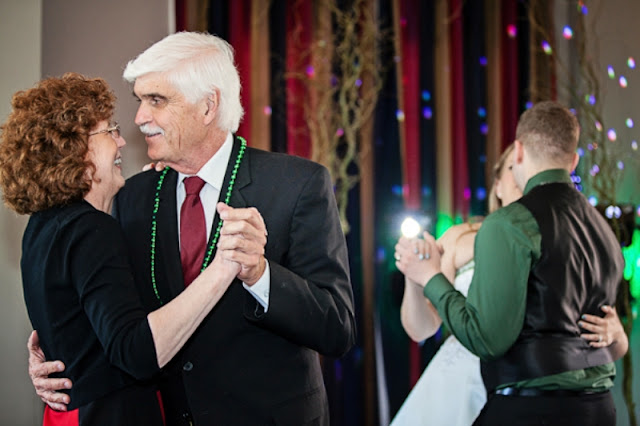 Sean and I lived near his base in Washington state. My family is located in Southern California – about an hour away from Disneyland. Obviously, asking my family to travel to Florida was immediately out of the question, but the price tag of an official “Disney Fairytale Wedding” was too much for us to stomach on such short notice. So we took our tiny budget (about $5k) and started figuring out how to make it work. That was when someone suggested a Downtown Disney wedding. I immediately contacted my favorite place to see if it was possible. Within the week, we had booked Ralph Brennan’s Jazz Kitchen.

Our entire wedding was planned and executed on a tiny budget and a tiny timeline – under 100 days. 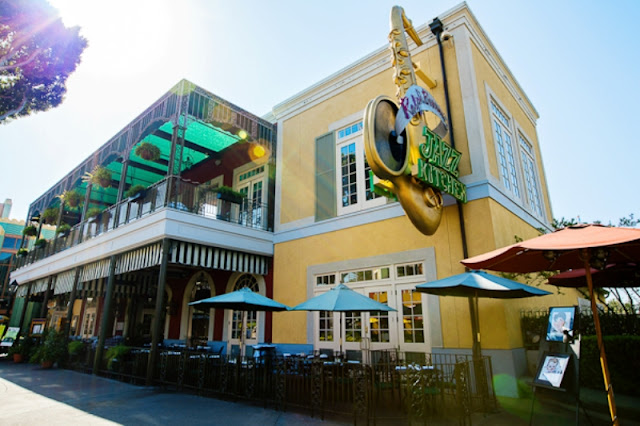 -Since we were already legally married – we asked a friend to officiate the ceremony that I (the bride) wrote. We used the vows we wrote for our elopement then, making it extra meaningful. (And saved on officiant fees!)

-Our tiny budget didn’t allow for the intricate rings we desired, so we skipped a ring exchange and did a hand-blessing ceremony and a love letter exchange instead. I decorated the love letter box, and we wrote letters the night before the wedding. The “rules” of the box were explained that – we are to add a letter every year, however we can only open them on our 25th wedding anniversary, or if we should come into a time of darkness in our marriage so that we could remember this day and draw inspiration and courage from it.

-The venue chose the date, since we were on a time crunch. It was a Sunday Afternoon on August 12th. Which just happened to be 2 days before my parent’s 41st wedding anniversary. Since I knew my parents wouldn’t be able to celebrate (Dad’s Chemo had sapped his energy levels), we invited my parents to the dance floor for 1 dance, right after our first dance. It was a great memory for my mom (she loves to dance and can never talk my dad into it) and a great memory for us (because ½ way through, my dad decided to break off and ask Sean to dance with him! It kept everyone laughing, but we swapped and I finished the dance with dad, and Sean finished the dance with my mom).

-We were a completely flower-free wedding. A friend of mine from a local community theater made my fan, and decorated my bridesmaids’ fans, from scratch! I paid her $50 for her trouble, and I paid for supplies. They turned out to be a great alternative to flowers. Not only could everyone take them home (mine is mounted on my wall), but it turned out to be over 100 degrees that day, and we put them to good use!

-For my Flower Girl, I made a Mickey topiary she carried out of fabric I ordered (same print as the bridesmaids’ dresses, only black and crème instead), some foam balls, and some of the left over feathers from the fans.

-Sean actually picked out our cake topper – but it was a limited edition Stitch and Angel statue only available for a short time in Japan. Unable to track it down, one of our bridesmaids caught wind of it, and her mom (a professional clay artist) decided to customize it for us to include our wedding details! It’s a great piece still in our kitchen (by the love letter box).

– The charms on my shoes I made myself. While on our layover in the airport, I whipped out some Shrink-i-dink paper and traced Angel and Stitch. When I got home, I used my parent’s oven to shrink them. Then my Matron of honor sewed them to my shoes.

– Our place cards were Mardi Gras party masks with names of guests written on the back of them. Once guests found their mask, they found their seat and got the mask as a favor to take home. We also added Mardi Gras beads to the table. I was able to order them both in bulk, and the rest were donated to the San Pasqual Academy (a home for wards-of-the-state kids) for them to us in their annual Mardi Gras celebration.

– Our invitations and our signature frame included a cartoon I had commissioned for us. For $60, we got the full, customized image. For $50, we went to Fed Ex, created and ordered our invitations using that image. Instead of RSVPs, we asked our guests to email us at a specific address with their information. This made it easy to form a contact book of Guests so we could send out information and updates.

-A seamstress friend of mine helped customize my dress by sewing ‘Hidden Mickeys’ into the back of it.

– The pearls I’m wearing came from my grandmother’s ring. My grandmother helped raise me when she moved in with my family when I was 5. She passed away in 2002. So my mother and I took a ring she had with 3 pearls in it. We made earrings for my mom with 2 of the pearls, and a necklace for me with one of them. So Grandma was there.

– Instead of a formal “rehearsal dinner”, we did several Sip n’ Snack events.

– Finally, we ASKED FOR HELP. The DJ was a friend and old roommate of mine that I did theater with when I lived in California. The videography was done by Paul Barrie of The Window To The Magic Podcast. His wife, Tairy Barrie did lots of work before and day of the wedding, making it a magical event! 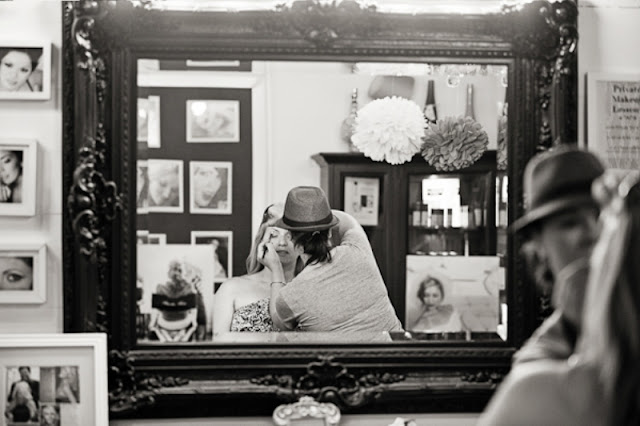 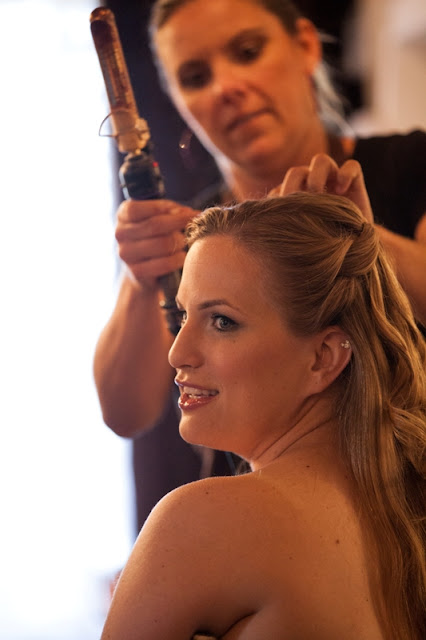 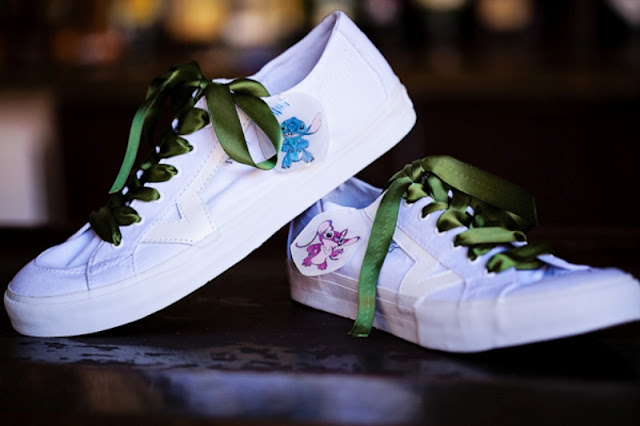 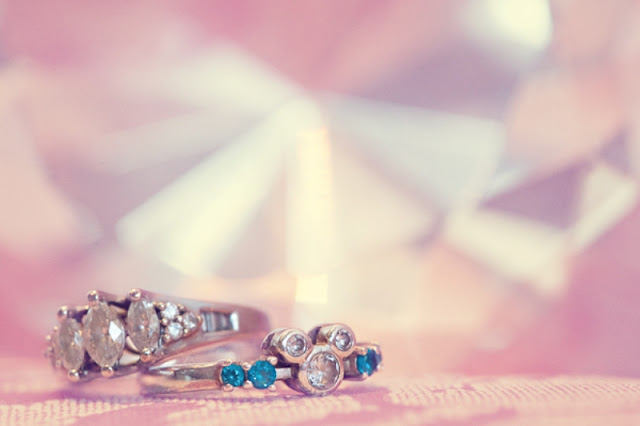 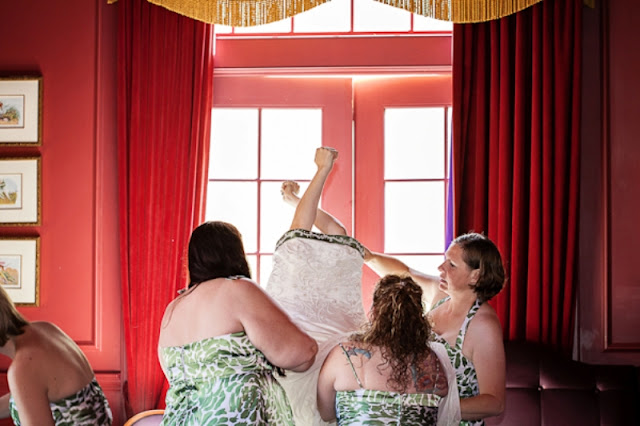 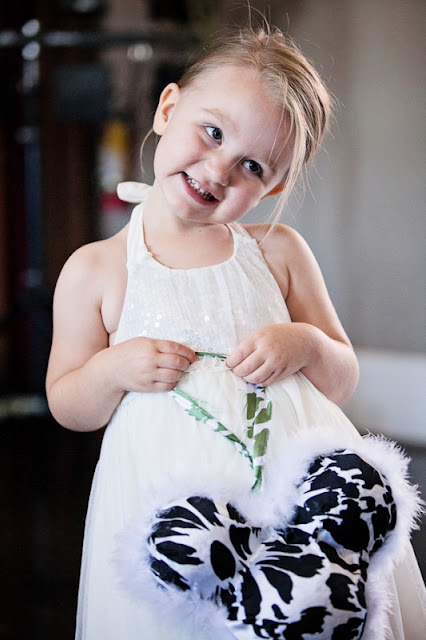 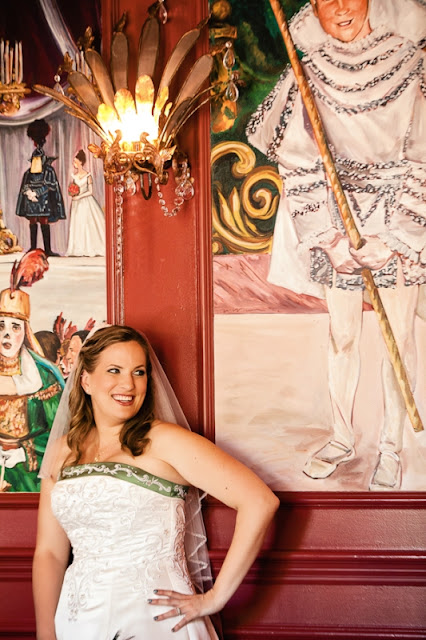 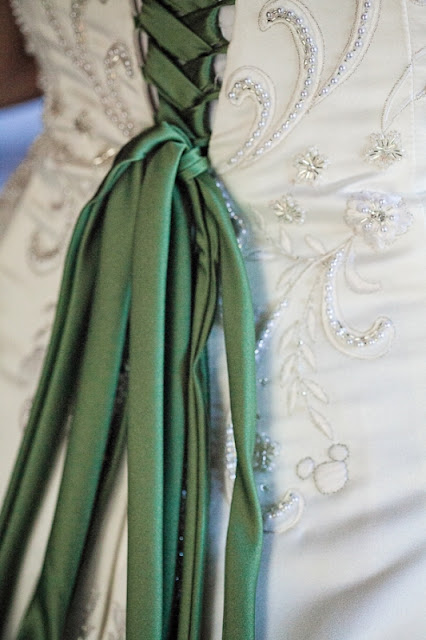 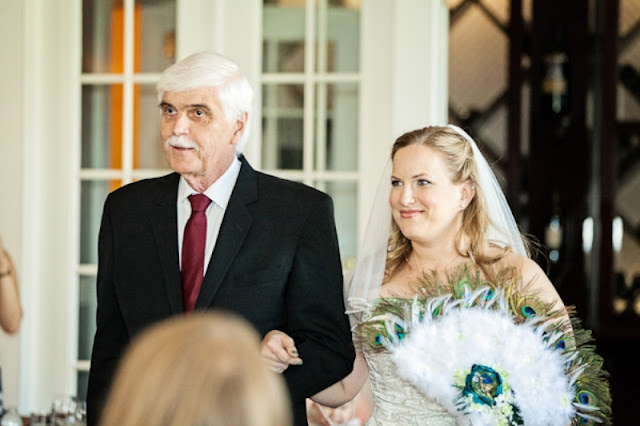 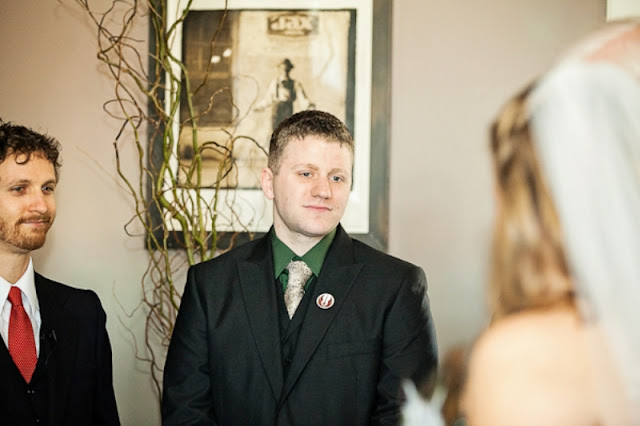 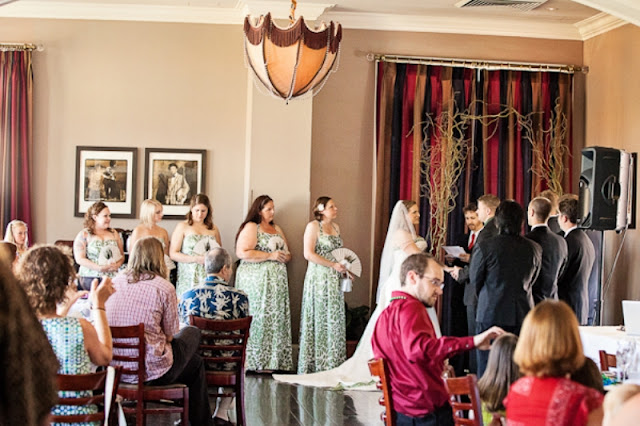 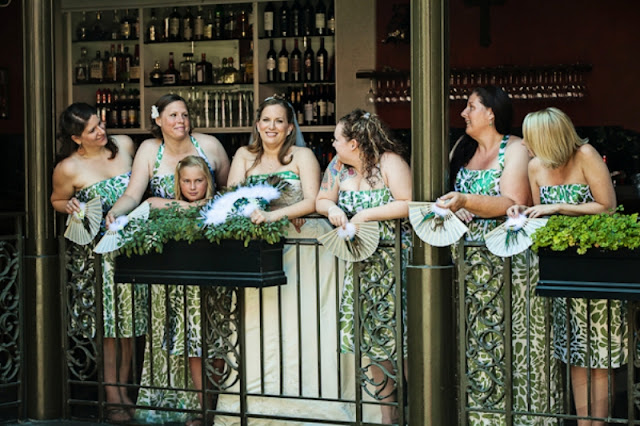 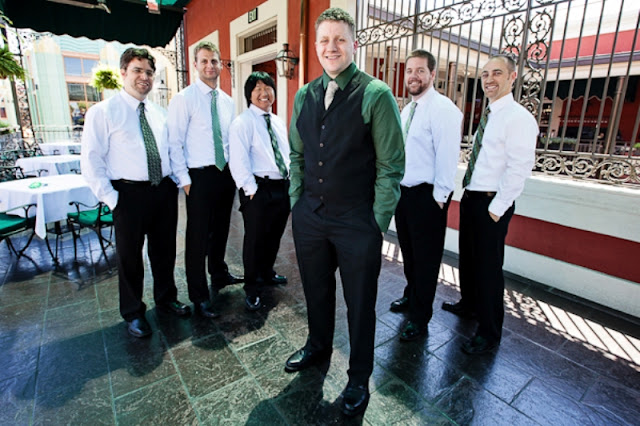 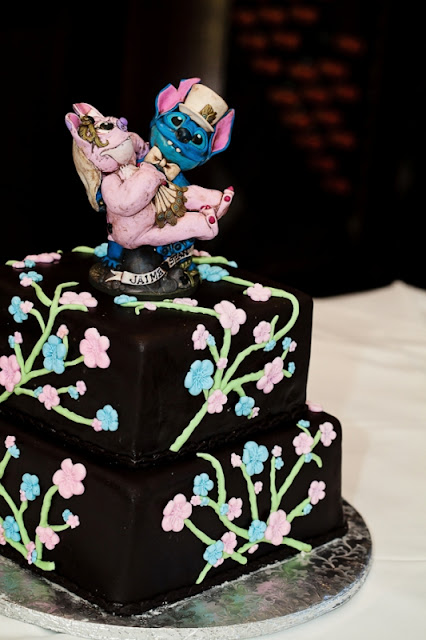 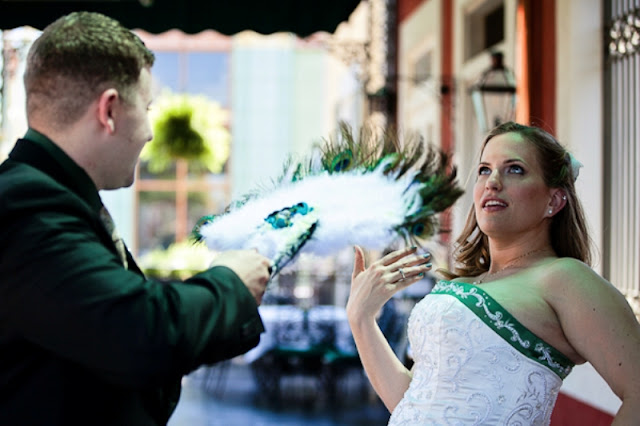 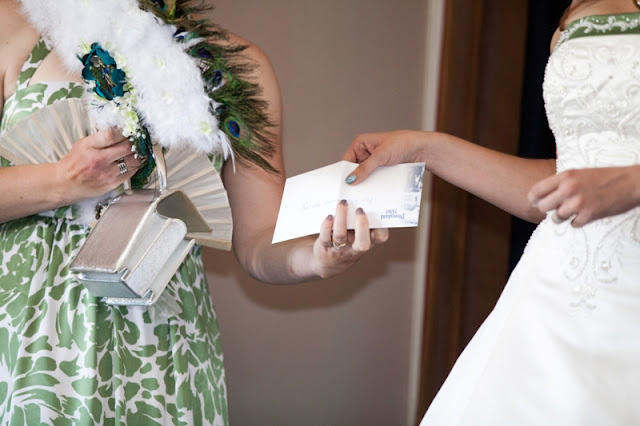 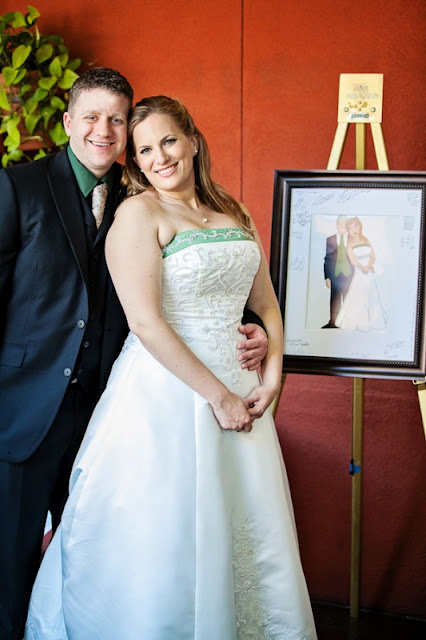 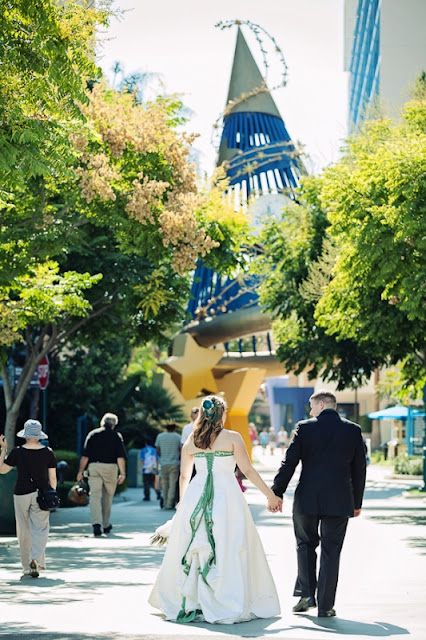 Earlier this week, Jaime lost her dad to cancer.  She wrote a touching tribute on her blog, J’s Journey Book.  And she also has this to add about your wedding day:

“All the details are wonderful, fun, and exciting, but after it’s all said and done, the flavor of the cake, the fit of the dress or color of the tuxedos don’t really matter. As long as these events create memories made with love and hope for the future, it’s a success. No one is promised tomorrow. Make the day count, no matter what it looks (smells or tastes) like.”