Skip to content
This Fairy Tale Life is reader supported. When you buy through links on our site, we may earn a monetary commission. Learn more.
We have another romantic Disneyland proposal to share today!  This one took place at one of my favorite places in the park – Blue Bayou!  It’s soooo romantic.  Someday, I want a garden with fake fireflies and colorful lanterns.  And a chef who will cook Monte Cristo sandwiches for me every day.  Mmmmmmm.  But I digress.  Congrats to Haily and Jason, who pulled off the surprise engagement. 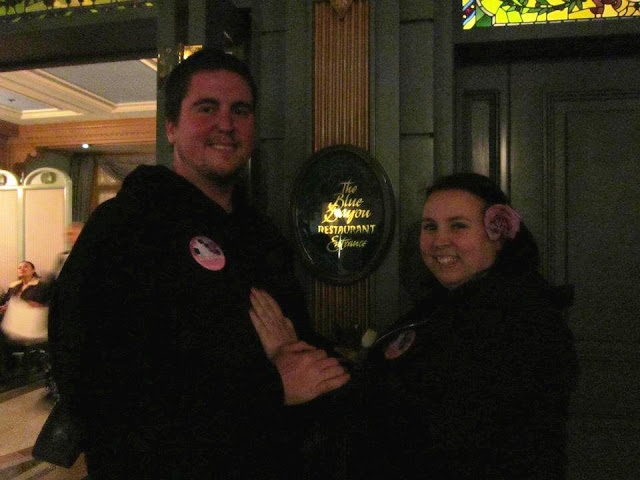 In March 2012, Jason and I were in Disneyland, our first time together. We had planned out four days for a Disneyland vacation. The first two days passed with no real excitement other then being in the park! Jason had never been as a child and even now in his late 20’s had still not ridden most of the rides! The 3rd day of our trip occurred on Thursday March 15, 2012. We were loading up in the car when he asked me if I wanted to put our backpack in the trunk. I didn’t really think anything of it and said no, that I would just hold it in my lap. He opened the trunk and shuffled in the backpack for a minute but again, I didn’t really even notice. We had reservations at Blue Bayou this night, but spent most of our time in DCA. When we rode Screamin I asked Jason if he had a good hold on the backpack since it held our gift cards and trading pins, “Oh trust me, I do” he replied. I’m a big pin trader and at some point during the day, Jason asked me if we should get the Mr and Mrs pins. I kinda laughed it off and said maybe when we are engaged (yes I’m a totally dense and oblivious person!).

Our dinner reservations were at 6:40 but by 5:00, we were both ready to take a break. We sat on one of the brick walls in New Orleans Square. Jokingly I asked him if by our next trip if we would be engaged. He told me later he was thinking “Oh little do you know….” At 6:00, we decided to check into the restaurant and maybe get seated early. I had to use the restroom and for some reason, didn’t think about the one in the restaurant, so I walked around to the one by the train station. When I returned, Jason was gone. I stood there kinda confused for a minute, until he came out from the main restaurant area. He just gave me a poker face and told me there was a bathroom right there (he was really speaking to the manager about the plan). At about 6:20 they called our names to be seated and as they walked us to our table, I noticed we were being seated waterside. I turned to Jason and told him how lucky that we were seated early AND waterside (still I had NO clue).

We had a nice dinner and were contemplating dessert when a waiter came by with a plate and set it down in front of me. I was thinking “Oh dessert plate! But wait…there isn’t any dessert on here….” The restaurant was so dim, I didn’t even see my ring nestled inside one of the lilies on the plate!! Out of the corner of my eye I see Jason and one knee and he told me he loved me more then anything and wanted to spend the rest of his life with me. After a moment of complete shock, I said yes and it wasn’t until he picked up the ring, did I finally see it. I was still in a total state of shock when at the next table over, another engagement occurs just minutes after ours! And a few minutes after that, another one! By this time we were laughing and joking that those guys saw Jason pop the question and thought “Shoot, he beat me too it!” The waiters passed out our “just engaged” buttons and we were given many congratulations. Just as we left the restaurant we found the perfect spot to sit and view Fantasmic. We didn’t even realize we would also get a great view for the fireworks right afterwards. As the fireworks were going off, I smiled and told him he couldn’t have planned a more perfect evening!