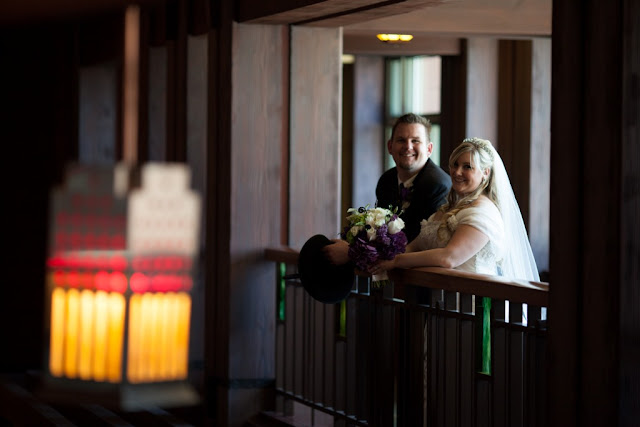 Why did you choose a Disney wedding? Disney has always been a huge part of my life, and when I met Jeremie I made it a part of his. We went to Disneyland for our first out-of-state vacation shortly after we first started going out and have been back to visit almost every year. Because Jeremie has kids from a previous
marriage, a wedding at Disney was the perfect option so we could have a “familymoon” immediately following the celebration. 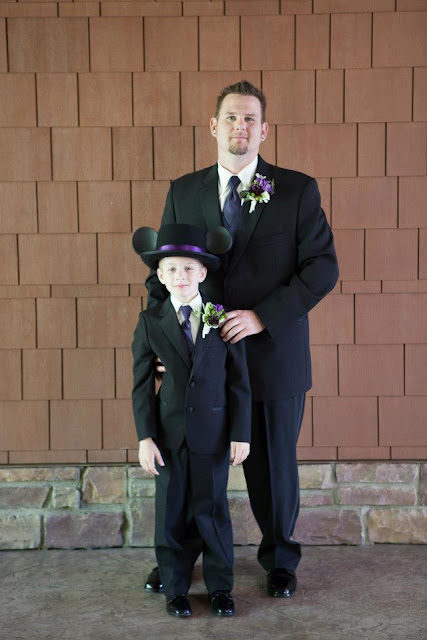 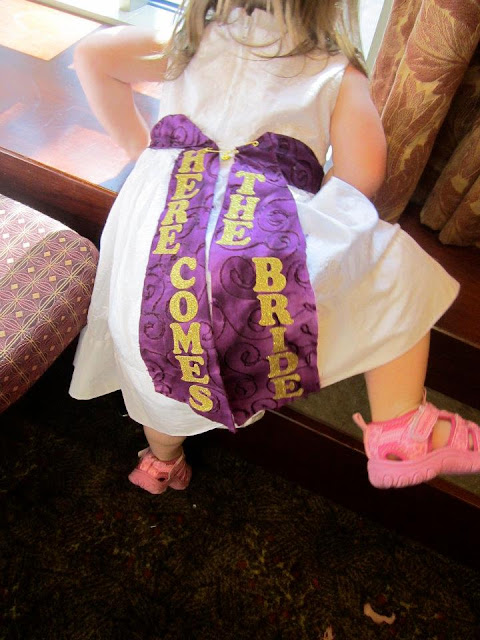 How did your family/friends react to your Disney wedding? Some family and friends were upset that they wouldn’t be able to be there due to costs of traveling to an out-of-state event. Because we went with an Escape Wedding we weren’t able to invite as many people as we would have liked (the limit was 20, including us). But we ended up having an extended reception at a friends home after the Disney portion so that additional friends and family could help us celebrate. Everyone had a blast regardless to which portion
he or she attended.

What was your theme? We had a color scheme, and then a classic Disney theme. Our colors were purple, accented with burgundy, gold and green. All of our stationary had the classic Mickey Head and we
continued to incorporate the Mickey silhouette in the details. But because my favorite movie is Beauty and the Beast I think there were some subconscious nods toward the film (for example in my dress, favors and table set-up). 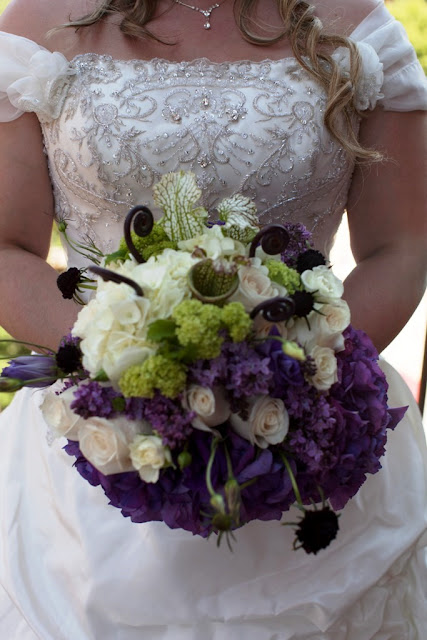 What was your biggest challenge in planning your Disney wedding? The biggest challenge was planning everything from Oregon; we never once saw our venue, tasted our food selection, or met our planners until the day of the wedding. That was a HUGE leap of faith for me, but Disney did an incredible job with every aspect of the day. I remember thinking after it was all over; “why was I so worried??!”

Tell us about your ceremony.  Did you include any Disney touches? The ceremony was on the Parkview Terrace and I requested the chairs form a crescent shape facing the ‘altar.’ We did a family unity ‘pinning’ where we gave the kids and each other a pin on our lanyards that cannot be traded. I also spent a great deal of time hand-making my aisle runner – to avoid the additional clean up fee from Disney I glued individual petals to the edges to add color and personalize the ceremony location. My youngest flower girl was too
young to do the flower tossing thing, so she had a ribbon attached to her dress saying ‘Here comes the bride.’ My stepdaughters, also flower girls, had Mickey pomanders. I also included tissue kits for my guests in case there were any tears; my groom ended up using a few for himself. 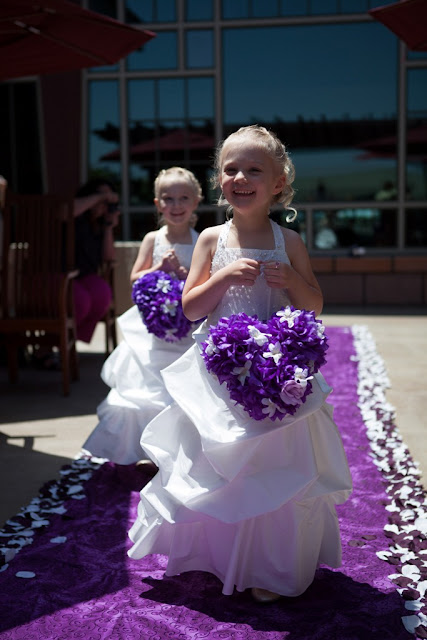 Describe your reception.  Was it completely traditional or did you do anything unique? Our reception was in the Disney’s Grand Californian Hotel’s Wisteria Room. Because we were having such a small amount of guests, we opted for the roman style table seating (think of the table where Belle and Beast ate). I included menus that matched our invitations, so they had the Mickey head silhouette, along with Cinderella slipper place card holders (the place cards had a black Mickey head on them for grooms friends/family, and purple Mickey head on them for the brides friends/family). We paid for additional hookups to play background music (much of it Disney instrumental/inspired music). Instead of a traditional guest book we had our guests fill out Disney postcards with advice, wishes, etc. and to prevent boredom and create conversation starters we used photo blocks as centerpieces with pictures of us together at Disneyland. We did traditional cake cutting, dances, etc. and saved the less traditional stuff for the extended reception. 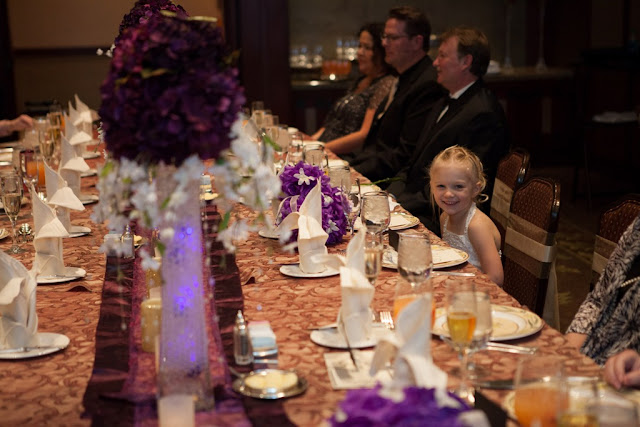 What did you splurge on?  Where did you save money? We saved a lot of money by booking the Escape package. The only upgrades we purchased through Disney were an additional boutonnière, the iPod hookup for the reception room, and some lemonade for the reception. In hindsight I probably would have skipped the lemonade; it tasted great but between the champagne, ice water, coffee and tea a lot of our guests really didn’t drink it.

What was your favorite moment of the day?  The day was incredible so it’s very difficult to pinpoint a single moment. But I think one that ranks up pretty high on my happy memory list is after the ceremony when my groom and I went into the lobby area of the hotel with our photographer and took photos; and a lot of little kids kept asking if I was a princess. I think that’s what every bride wants to feel like on her wedding day, and I certainly did. 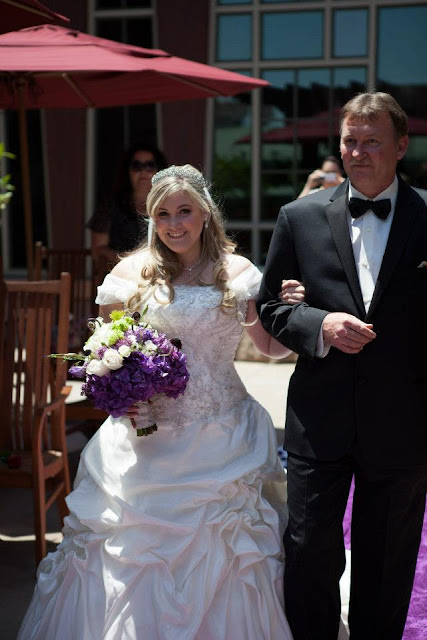 What would you change if you had to do it all over again?  The only thing I would change is perhaps the date. My groom’s father passed away about a week before the wedding. I also had an uncle whom I was very close to that was very ill with terminal cancer and was unable to come due to his health. I wish we could have gotten married a little earlier so they could have been with us (in person) that day. 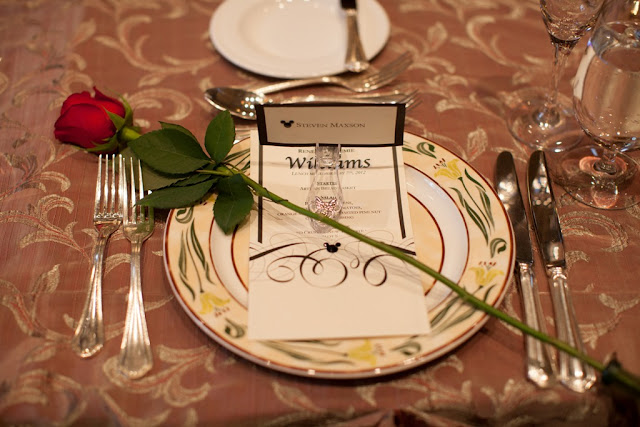 What advice would you give to couples that have just started planning their Disney wedding?  Use your resources, do your research, remember that Disney will not let you down and to have faith in them! Being a control freak I was so worried that they wouldn’t have all of their ducks in a row, which was such a silly thought. I also feel that a wedding should really be a celebration, so don’t remember to lose yourself in the ‘business’ of it all and keep true to what it really is about. 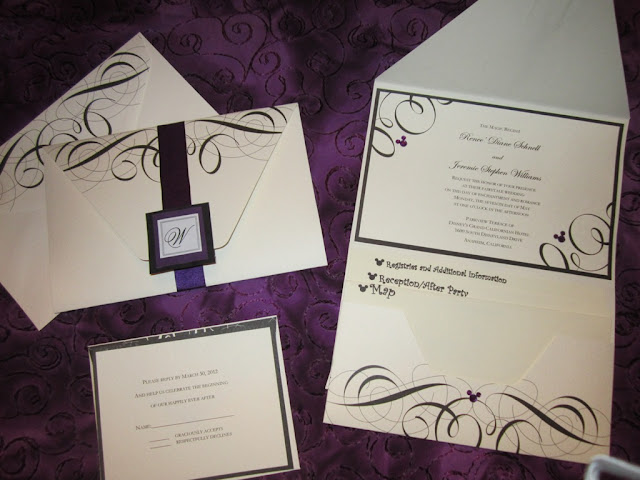 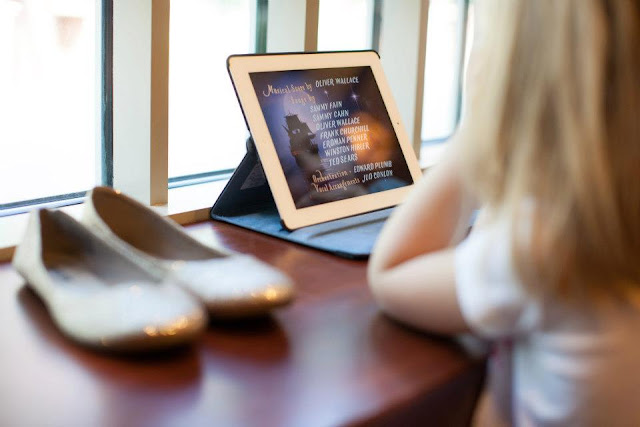 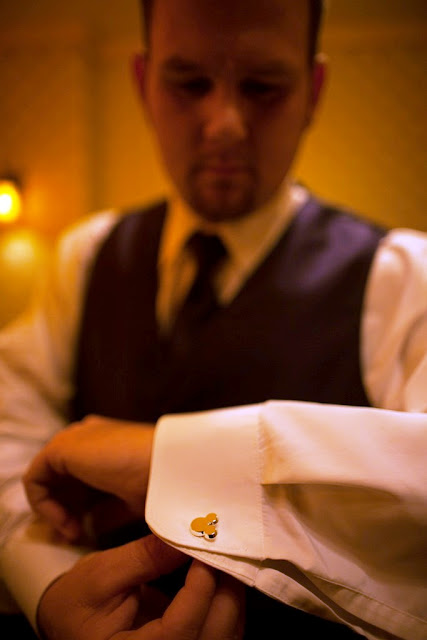 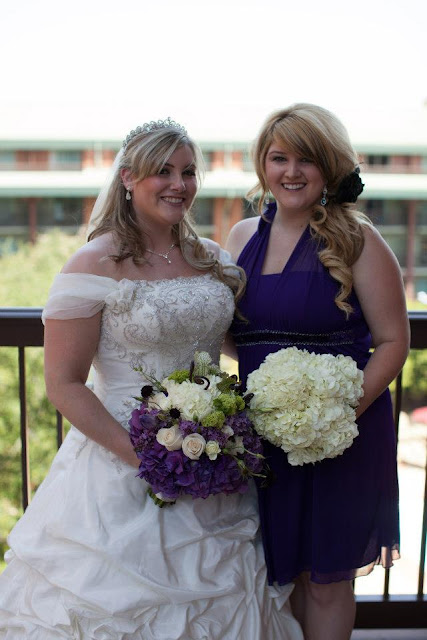 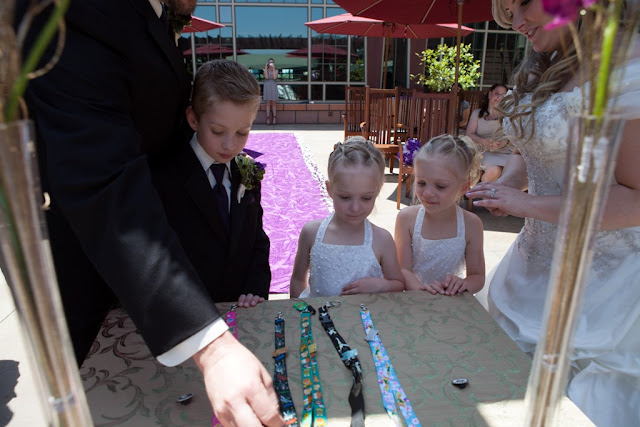 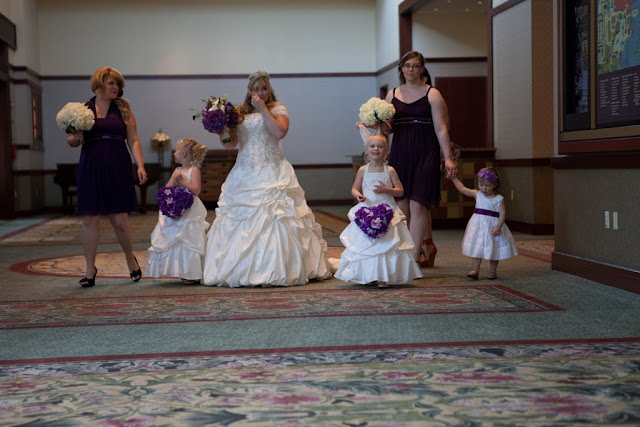 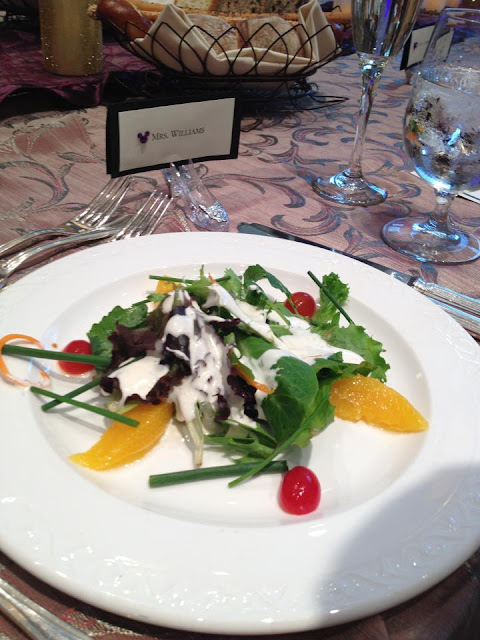 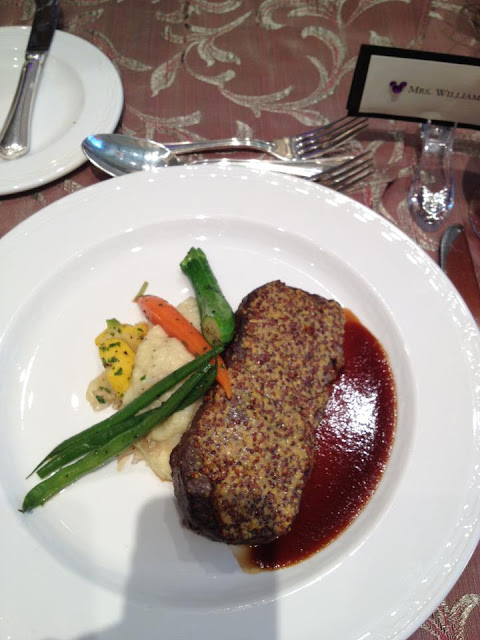 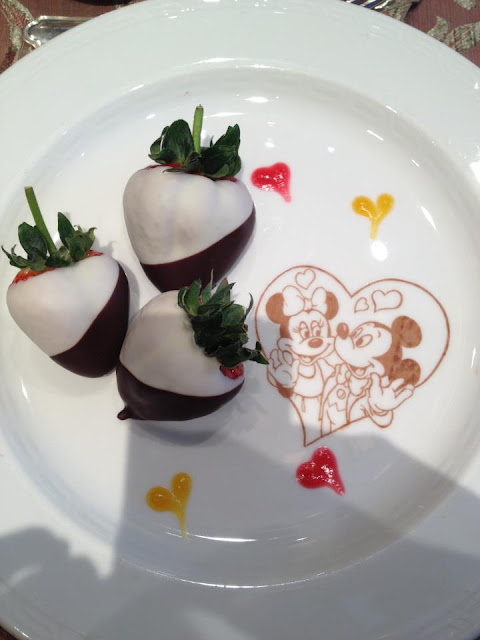 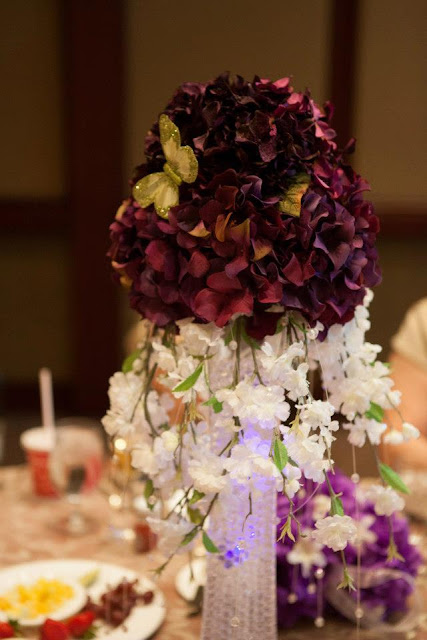 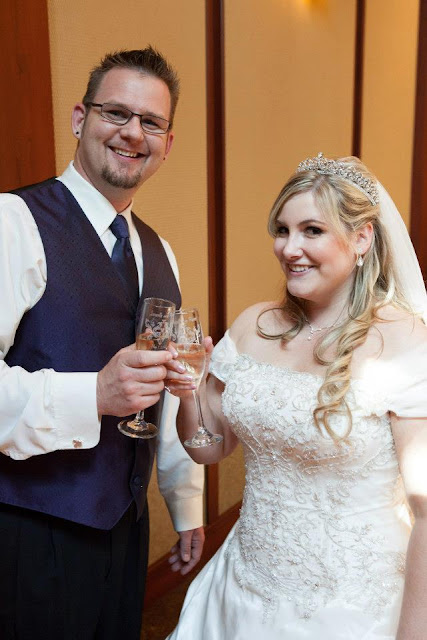 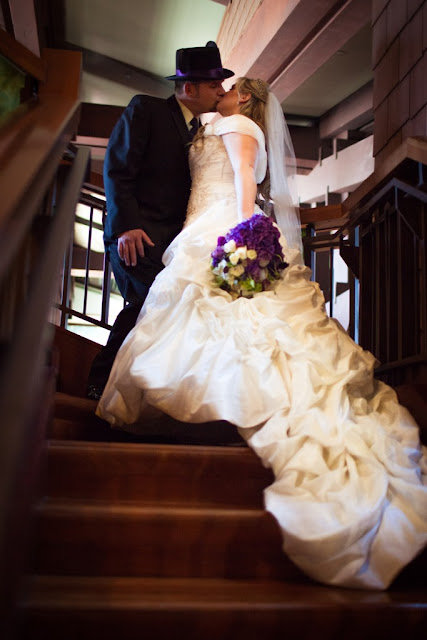