My wish has finally been answered!  I’ve been wanting to feature a Disney Cruise wedding since I started this blog back in January, and Disney Bride Lisa has has made my dreams come true!  Reading about Lisa and Rob’s Castaway Cay wedding has me jonesing for a tropical Disney vow renewal, and it’s only been five months since my Disneyland wedding!  Such is the life of a die-hard Disney fan.  After their cruise, Lisa and Rob topped off their wedding celebration with a Walt Disney World Disney-moon and a photo shoot at the Magic Kingdom.  Le swoon.  Congrats to Lisa and Rob, and thanks for sharing your story with us! 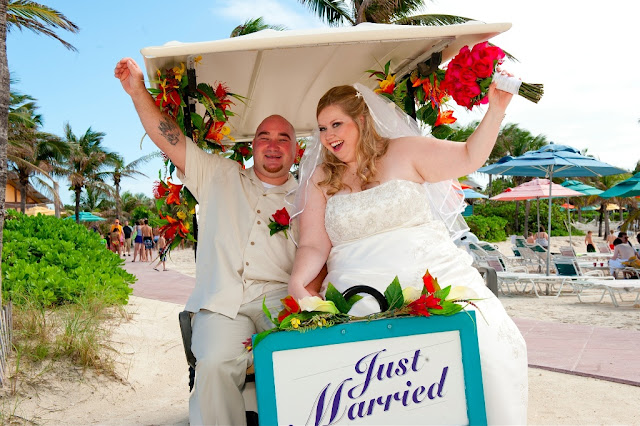 Why did you choose a Disney wedding? Our magical Disney Cruise Line wedding began when I Googled “Cruise Weddings.”  I saw a great article from a previous Disney Bride, Lisa.  I was like “WOW” after reading her trip reports on the Disboards.  I must say she was wonderful and became my travel agent and wedding expert.

The first thing my travel agent did was book my wedding.  I knew in my heart I wanted to be married on Castaway Cay, Disney’s private island for their cruises.  This is very hard to book and we booked about 18 months in advance! To book the wedding we had to put a deposit down on our cabin.  We chose a 4 night/5 day cruise in November.  This was extremely good because it was the price of the 3 night cruise during other seasons, so definitely work with someone who can help you get the most bang for your buck. 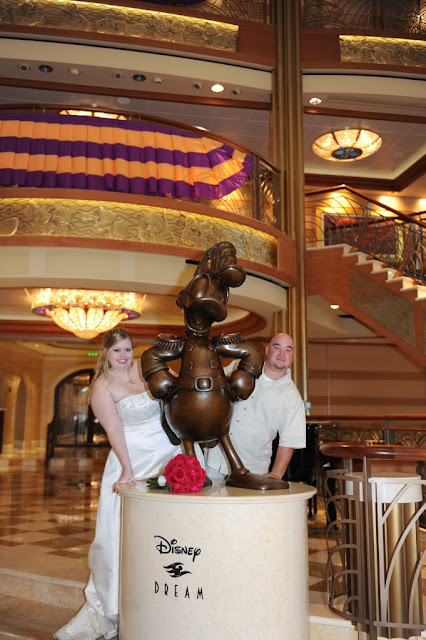 How did your family/friends react to your Disney wedding? Overall it went over with a thud! Many of my friends were feeling upset that they would not be able to make it. It was hard for many of my friends to really be happy about the whole wedding as destination weddings were something many could not understand.

What was your theme?  We went with the theme Magical Disney Wedding. I made shirts on Vistaprint for $2 each and they still look great to this day! We used them folded with cards for our wedding favors given out at the wedding…Men got shirts that said, “I survived Lisa and Rob’s Magical Disney Wedding.” They were a big hit! 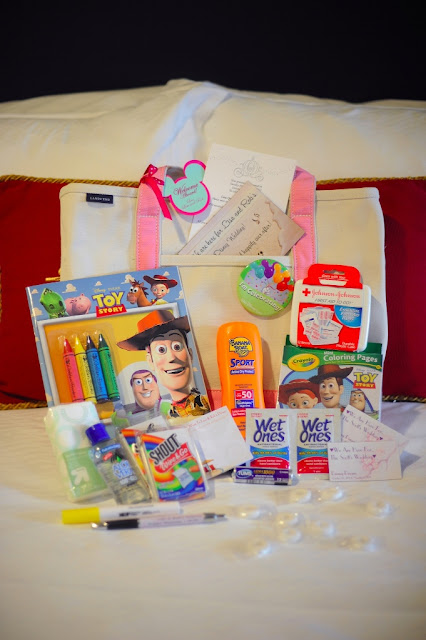 What was your biggest challenge in planning your Disney wedding?  Working with Disney themselves. They can be very trying at times to work with when it comes to weddings.

Tell us about your ceremony.  Did you include any Disney touches? The ceremony was on Castaway Cay, it was beautiful. Barefoot, toes in the sand and the sound of the lapping water. Picture it? Amazing! I had fans made out of Mickey heads for the guest…they loved them! 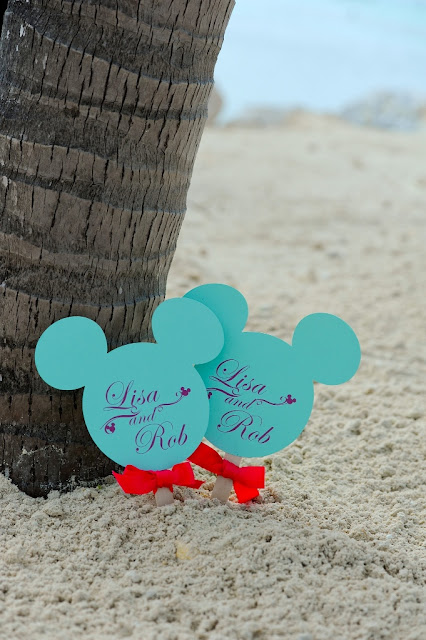 Describe your reception.  Was it completely traditional or did you do anything unique?  The reception was in the Outlook, with wall to ceiling windows and the Bahamas all around! It as amazing.  We had a gentleman playing the piano and then I also provided songs on a disc to be played for our dances.  I would say we kept it pretty traditional and decorated the cake table with our wedding confetti, Mickey and Minnie wedding hats and a sign I had made from Etsy! 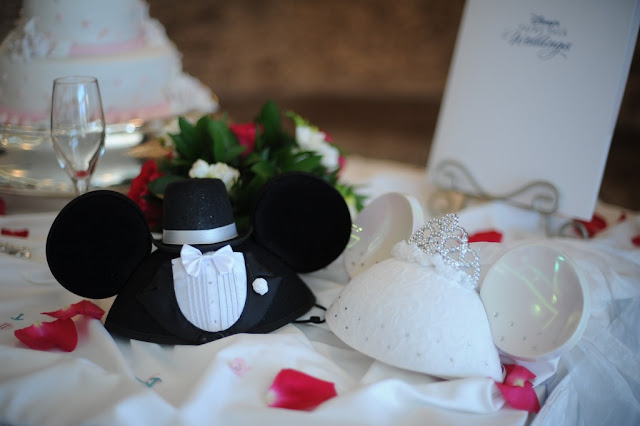 What did you splurge on?  Where did you save money?  We splurged on photography! We saved money by not spending so much on little things, like favors and such.

Disney was wonderful and helped me mail two boxes to the ship (instead of paying for expensive baggage fees with the airlines) containing our wedding favors and the silk flowers I had made for the wedding.  I did silk flowers because in my opinion Disney wanted to charge too much for the flowers.  All that was included in our wedding package was my bouquet and my husbands boutonniere.  I spent about $500 for a silk bouquet made for our Magic Kingdom shoot, boutonnieres made for my husband (Magic Kingdom shoot), my father, and my uncle.  I also had a maid of honor bouquet made for my sister and two corsages made for the mother of the bride and groom.  Much more economical and all were able to keep as keepsakes. I also became addicted to Etsy during this time and had wonderful things made for our wedding on there! 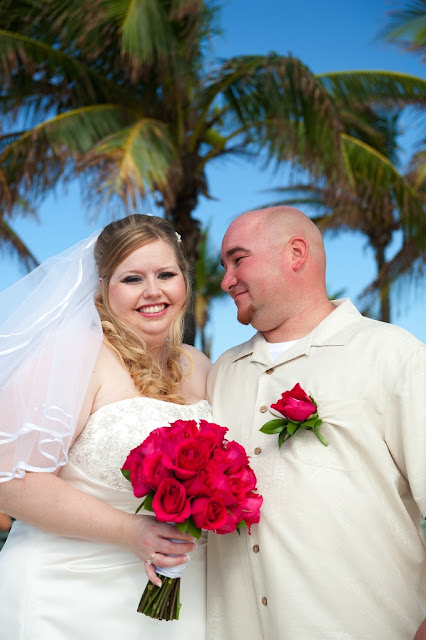 What was your favorite moment of the day? Seeing the smiles on my family and friends….it was a priceless moment when I was able to refer to my husband as my husband.  To this day it still seems like a dream!

What advice would you give to couples that have just started planning their Disney wedding?  My travel agent, Lisa, was a life saver.  She knows Disney in and out AND got married on Castaway Cay like I did.  She was a wealth of knowledge. 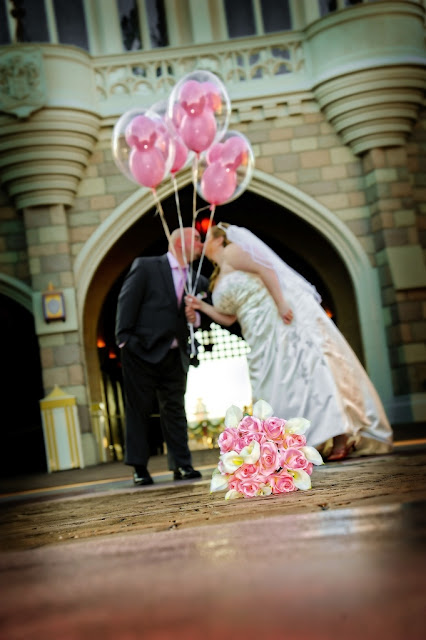 Any other details you want to share?  There is SO much I could say about our wedding as I feel it was our Disney fairy tale done economically.

We arrived the night before the cruise and stayed at Pop Century.. We also treated our immediate family to our rehearsal dinner that night at Ohana and got preferred seating to watch the fireworks show, Wishes. It was magical! We then did the 4 night/5 day cruise on the Disney Dream which was the “new” ship at the time! We then went back to Disney for  9nights/10 days for our Disney-moon! We were also able to add a Magic Kingdom shoot and LOVE that we did this even with some hiccups we experienced…. To keep costs down we used our timeshare to stay in Old Key West for the Disney-moon.  We saved money by buying discount park tickets through my job.

The focus of our wedding was the memories, including our photos.  I knew I was not leaving this up to Disney as their photography on the cruise can be hit or miss.  I brought my own photographer and she was wonderful!  She really captured our wedding and the photos are priceless to us! She shot the entire day, before the wedding and then on the island for the ceremony.  While our guests were being escorted back up to the reception of cake and champagne we stayed with Mikkel and got pictures all over the island! Minnie even had our rings placed on her nose…thank goodness she did not sneeze! 😉 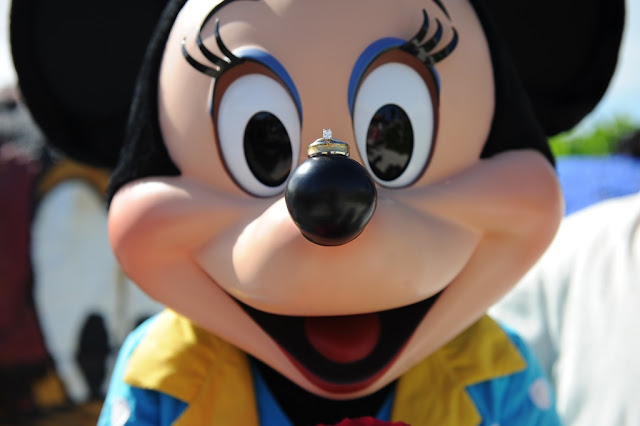 After the ceremony and first dances we had the ship basically to ourselves! My sister was very excited to take a dip in the pool fully dressed from the wedding.  Mikkel then walked the entire ship with us and got great photos everywhere. I say my vote is bring your own photographer, you will be glad you did! 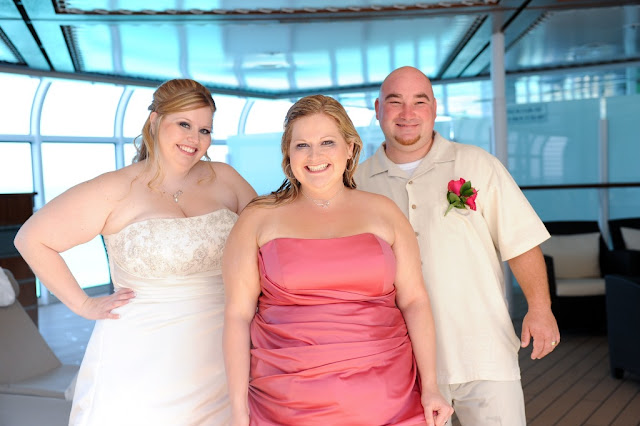 One thing to note is that at the time of our wedding, Disney did not offer videography on Disney cruise weddings, so be prepared to have someone video for you.  A friend did this for us, and included in our budget was a Nikon D5100 camera. It takes 1080 filming in HD so I am now working on making my own wedding video on my Macbook. 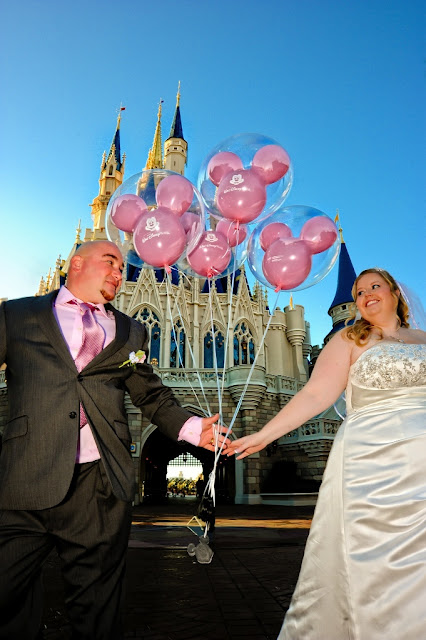 I did want to note our Magic Kingdom shoot was great, however, I have seen some wonderful shots that our photographer just did not capture.  I did feel that she was not very creative which hindered our process.  Her camera also had issues and she did not bring another one (which was extremely upsetting as they literally kick you out of the park when they are about to open so I was VERY upset).  We got great shots but I did feel we should have received more (ie different locations, not just generic shots) for the cost of the shoot. Another reason why we were glad we brought our photographer for our wedding!

Venue: $2,800
Food/Drink: Food is all inclusive so it was included with the price of the cabin, which was $1,600
Floral: I paid about $500 for the silk flowers
Other Decor (chairs/linens): Included with the venue fee
Officiant: Included with the venue fee
Ceremony and Reception Music: Piano musician included, plus I made my own CD
Favors: Around $500
Photography: $3,000 for both the Magic Kingdom shoot and personal photographer
Videography: A friend recorded it using a Nikon D5100 camera we purchased
Bride’s attire: $800
Hair/Makeup: $150 for hair in the salon, and my sister did my makeup
Groom’s attire: $300 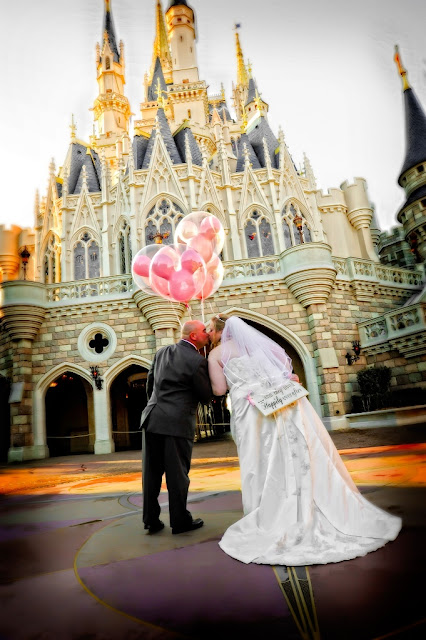