Happy Halloween! This is one of my favorite posts of the year, and it’s because I get to show off the creativity of you – the This Fairy Tale Life readers! I know most (all?!) of you are Disney fans and Halloween is the opportunity to live out our dreams of being our favorite Disney character. I love seeing the costume couples, but what I didn’t anticipate years ago is all of the Disney baby and kiddo costumes I’d see as Disney wedding couples became Disney families. I’m so thrilled to share this year’s Disney Bride Halloween Costume Parade with you! 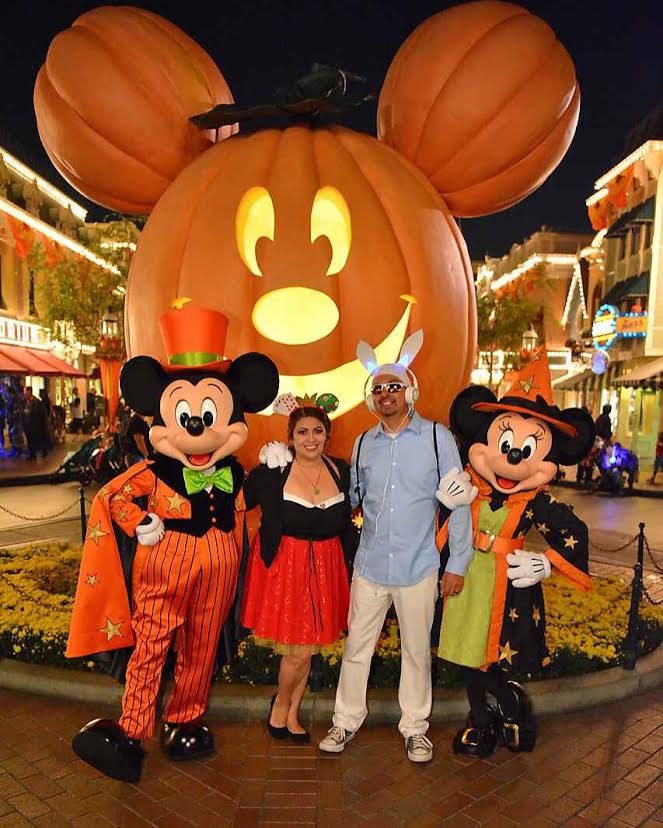 Christi and John look great as the Queen of Hearts and White Rabbit DJ – a nod to Disney California Adventure’s Mad T Party. 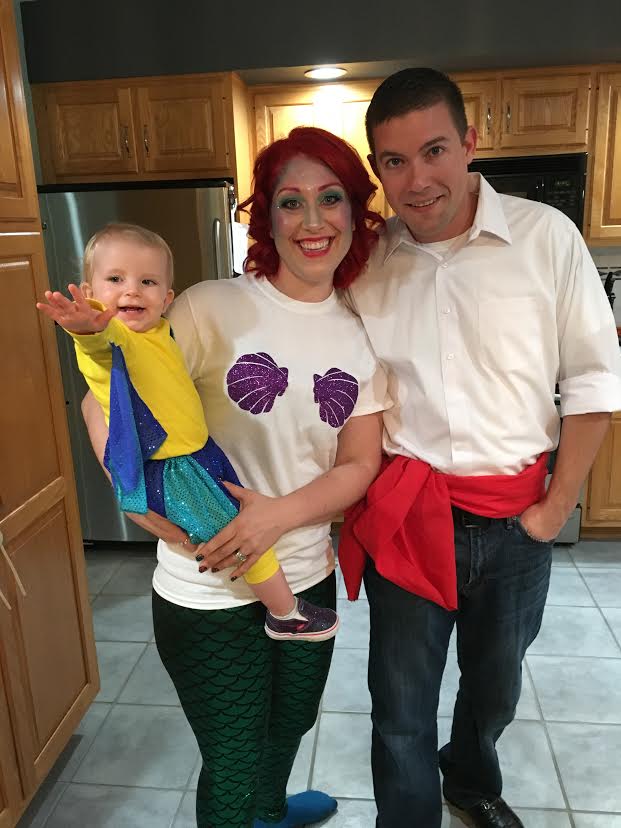 Jenifer and David look great as Ariel and Eric, and of course their little Disney baby as Flounder! 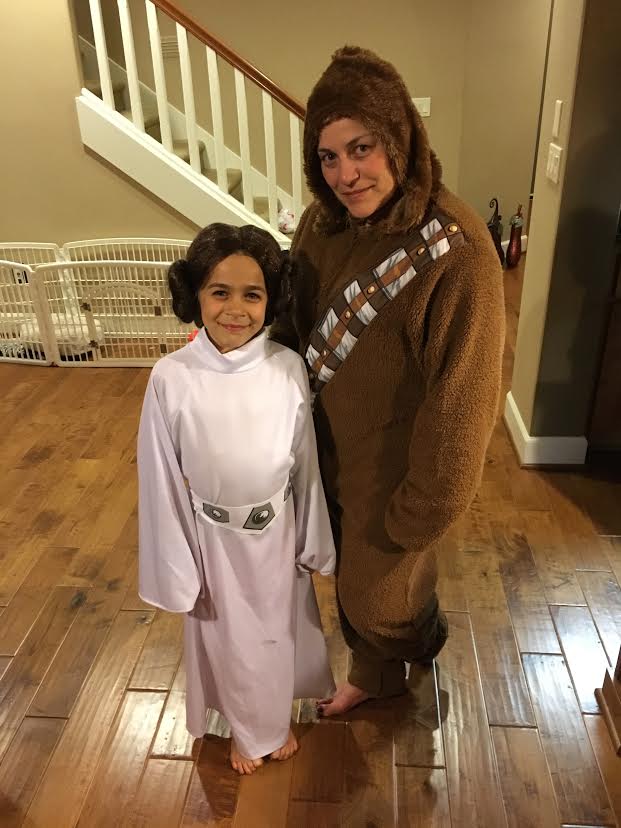 Jana from Merlot Mommy and her kiddo make a cute Star Wars pair. 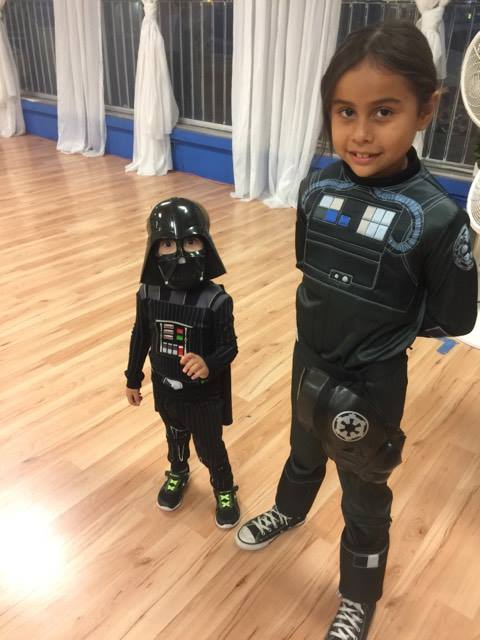 I love that we’re starting to see Jyn Erso costumes! Here’s a little Jyn along with brother Vader. Thanks to Disneyland bride and groom Cynthia and Israel for sending this in! 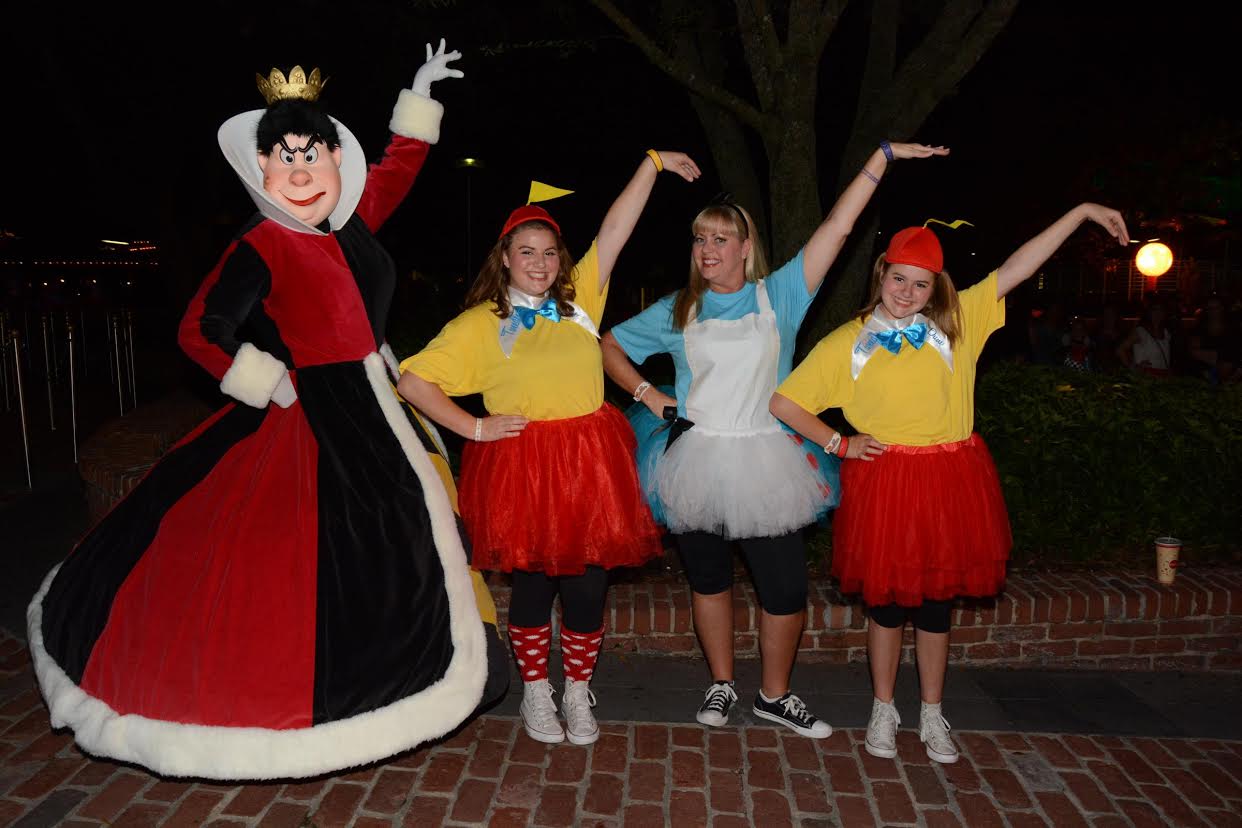 Disney Moms Panel alumni Diane and her two daughters strike a pose with the Queen of Hearts at Mickey’s Not So Scary Halloween Party. 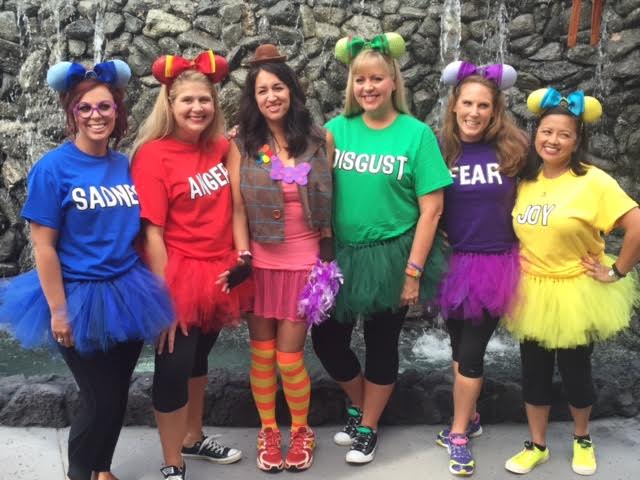 A group of lovely Disney bloggers show off an Inside Out group costume. 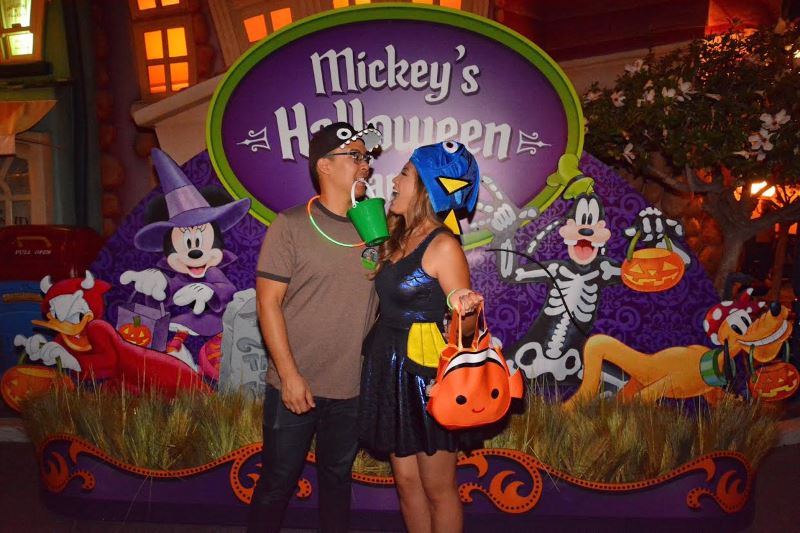 Off! Off! Off! Disney bride and groom Jennifer and Peter are adorable as Dory and Gerald! 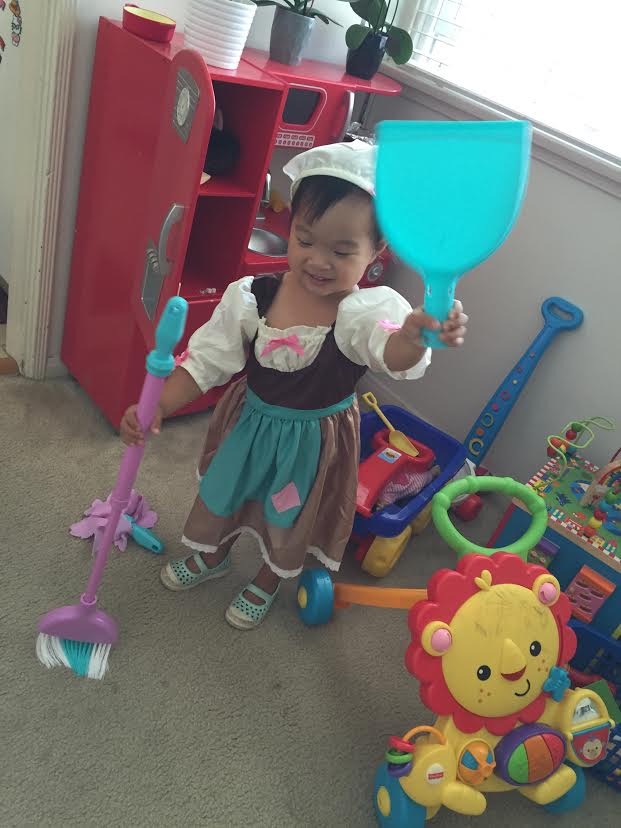 Chris from Babywearing on a Budget says her little girl is obsessed with cleaning so the peasant Cinderella costume came naturally! 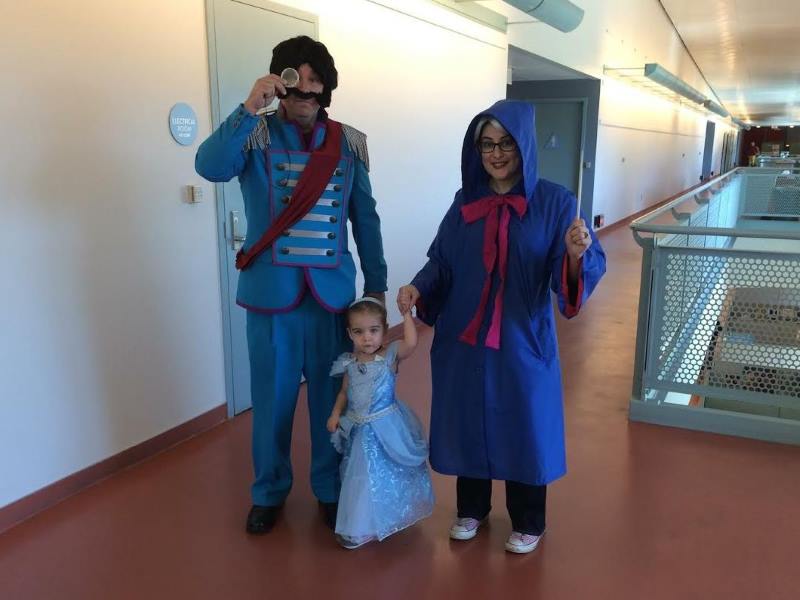 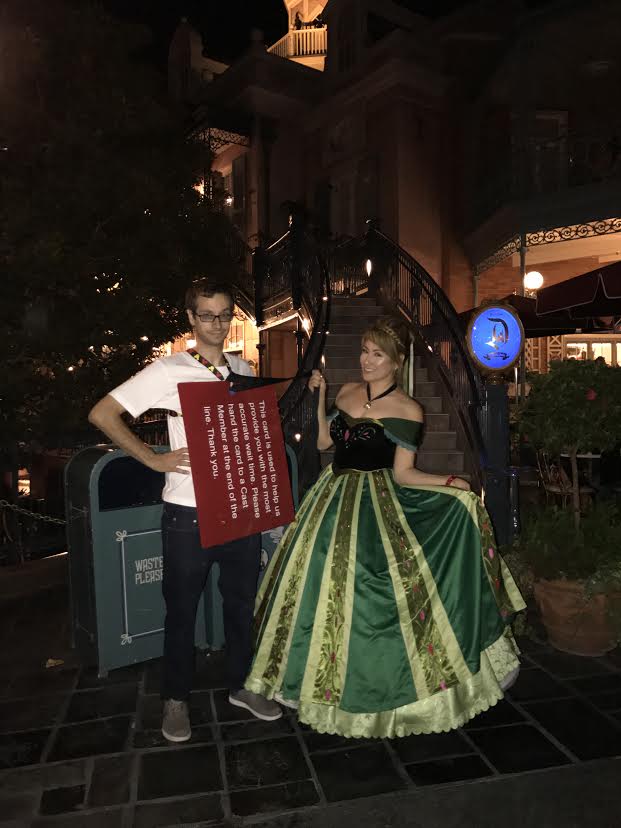 Disney Bride Katie as Anna and Disney Groom Aaron as a Flik card (you have to pretty much be a Disney Parks expert to get that reference). 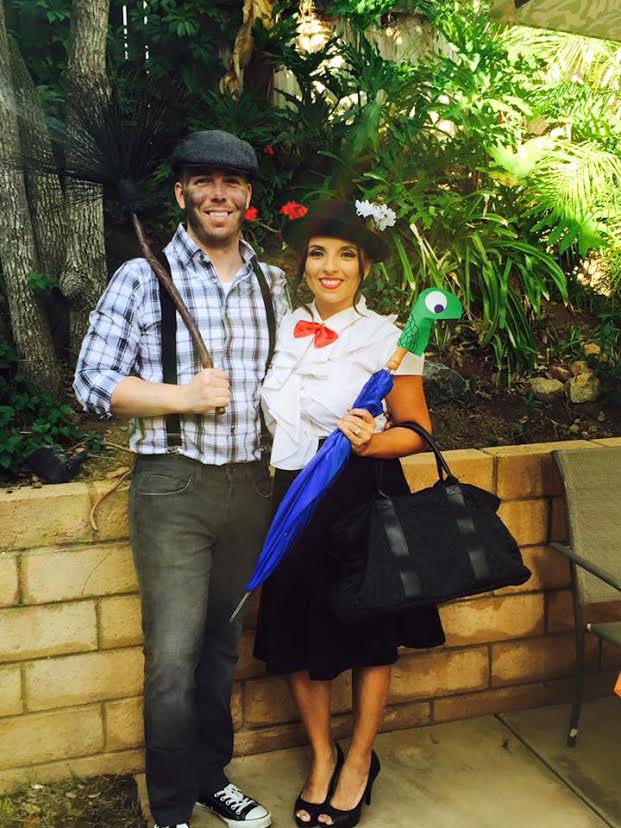 Paty and Travis make a perfect Mary and Bert! 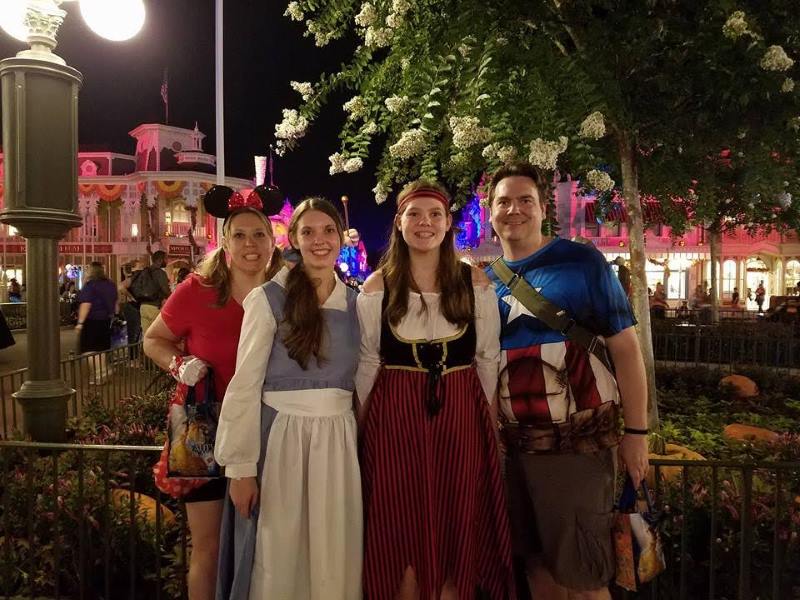 When everyone wants to do their own thing … Tricia from Sunshine Rewards poses as Minnie with Belle, a Pirate, and Captain America. 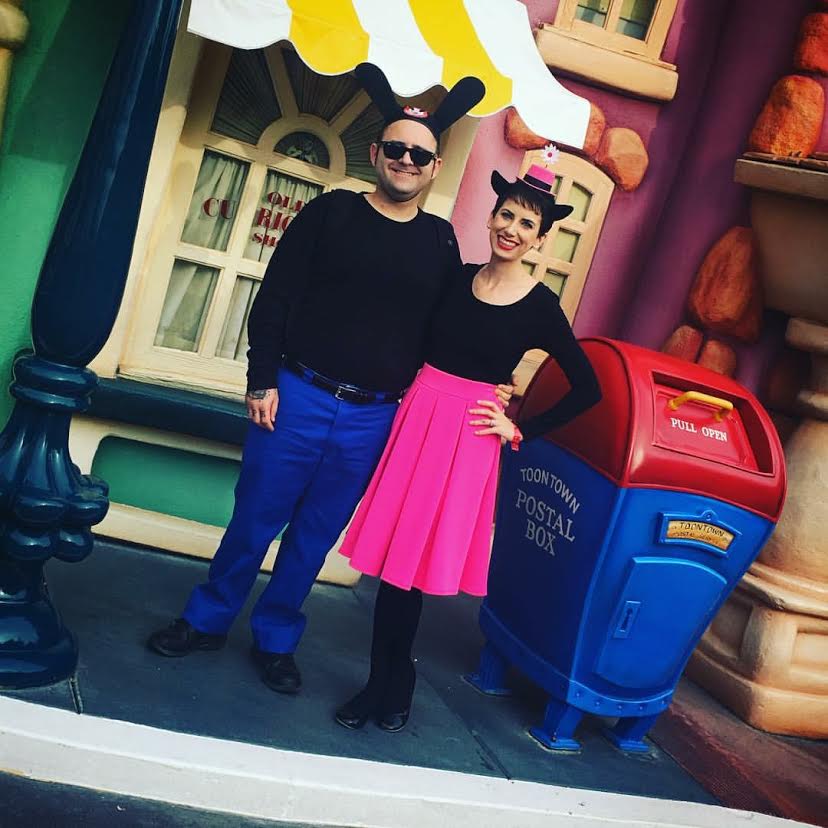 How cute are Lacey and Paco as Oswald the Lucky Rabbit and Ortensia the Cat? 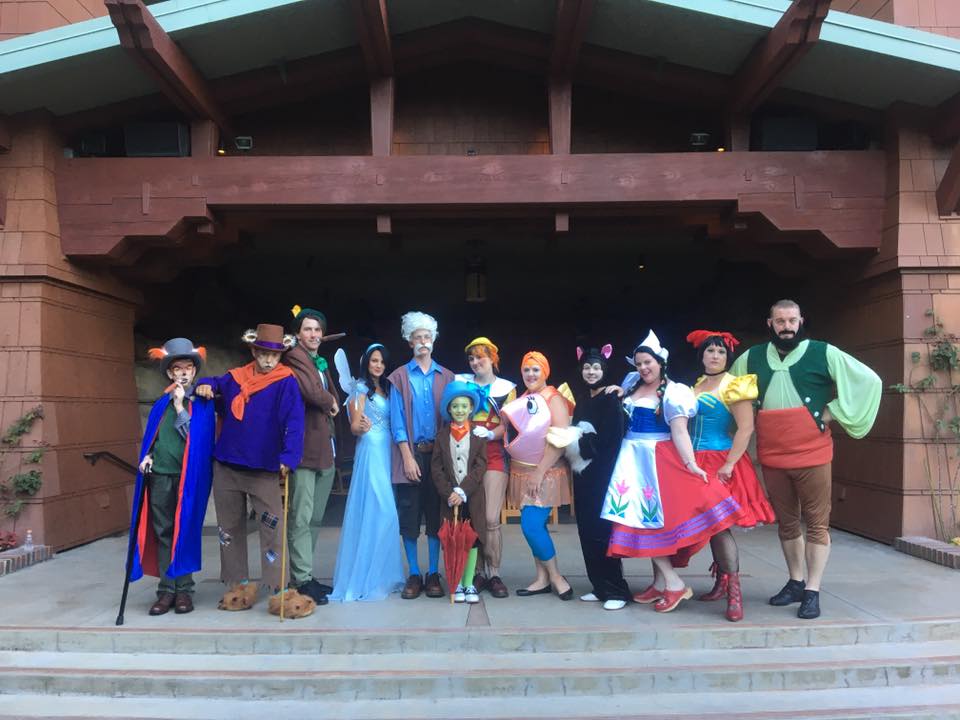 Heather and her family & friends always do the most amazing group costume every Halloween. Here they are as the group from Pinocchio. How many characters can you name? 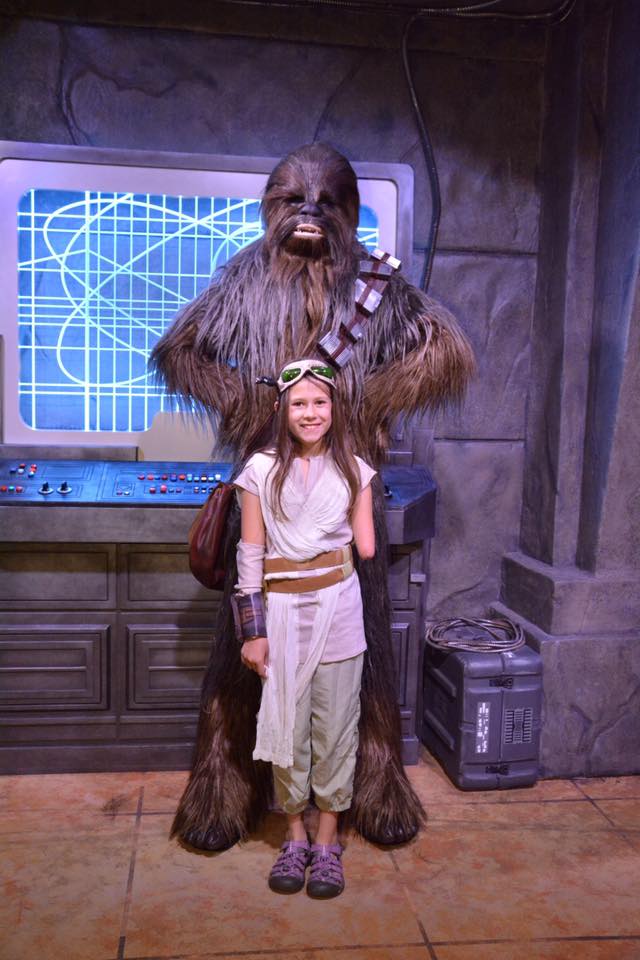 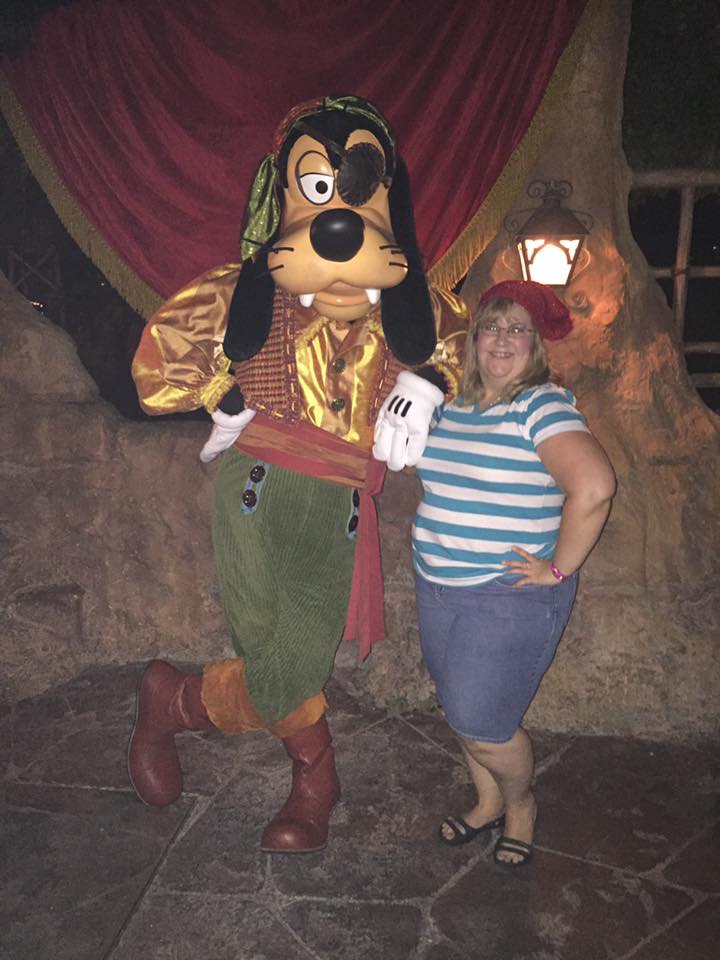 Michelle as Smee made a new pirate friend at Mickey’s Halloween Party! 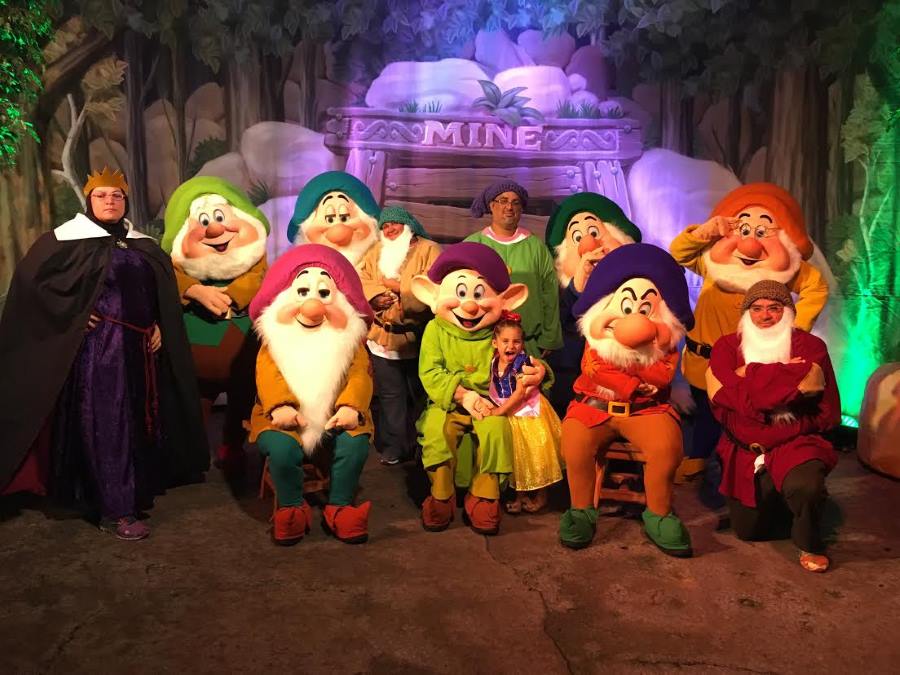 Disney bride and groom Michelle and Freddy as Evil Queen (costume by affiliate link Ena’s Bazaar) and Grumpy. Their little Disney kiddo makes an adorable Snow White. Even a couple cousins got in on the fun! 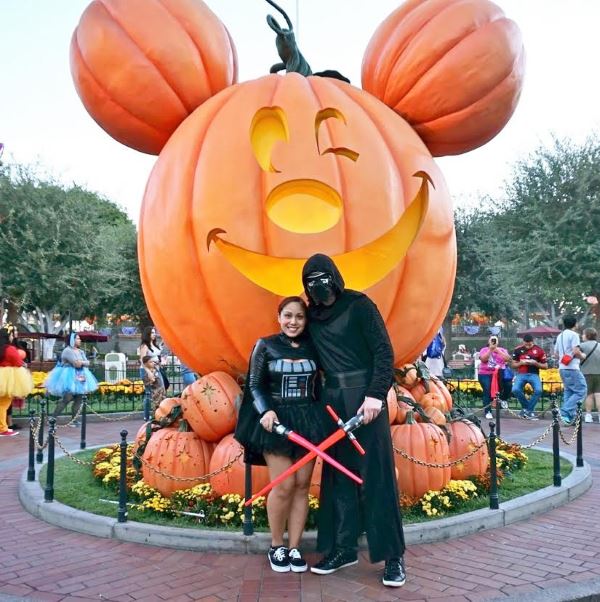 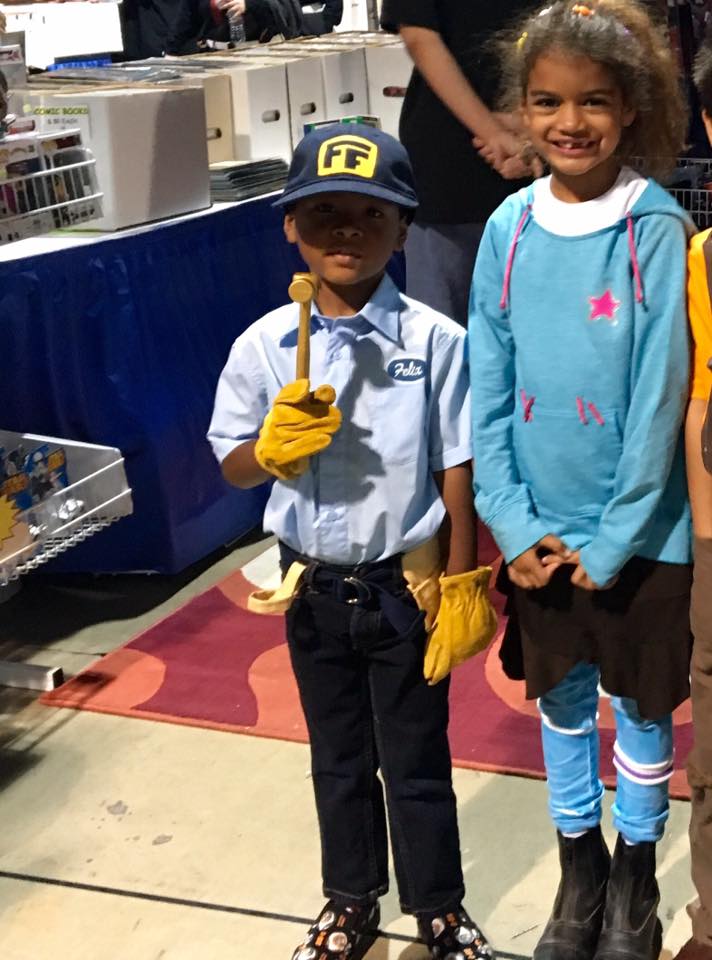 Two of my favorite youngsters dressed up as Fix it Felix and Vanellope Von Schweetz. 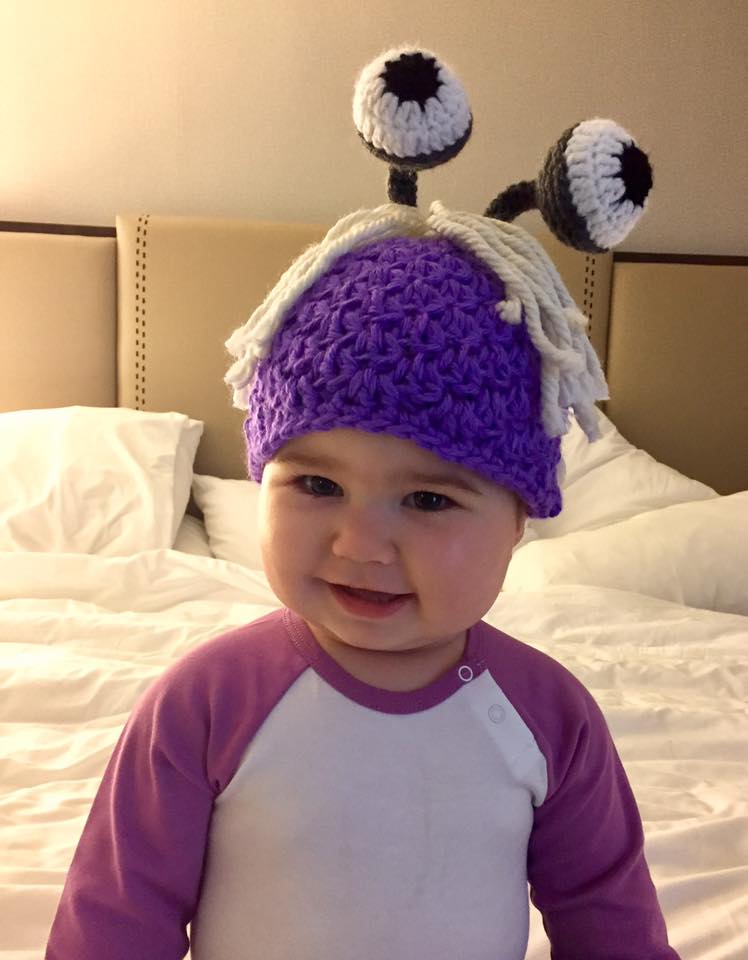 I’m having trouble deciding which of these smushy Disney baby costumes, submitted by Disney Bride Holly, are cuter … is it Boo … ? 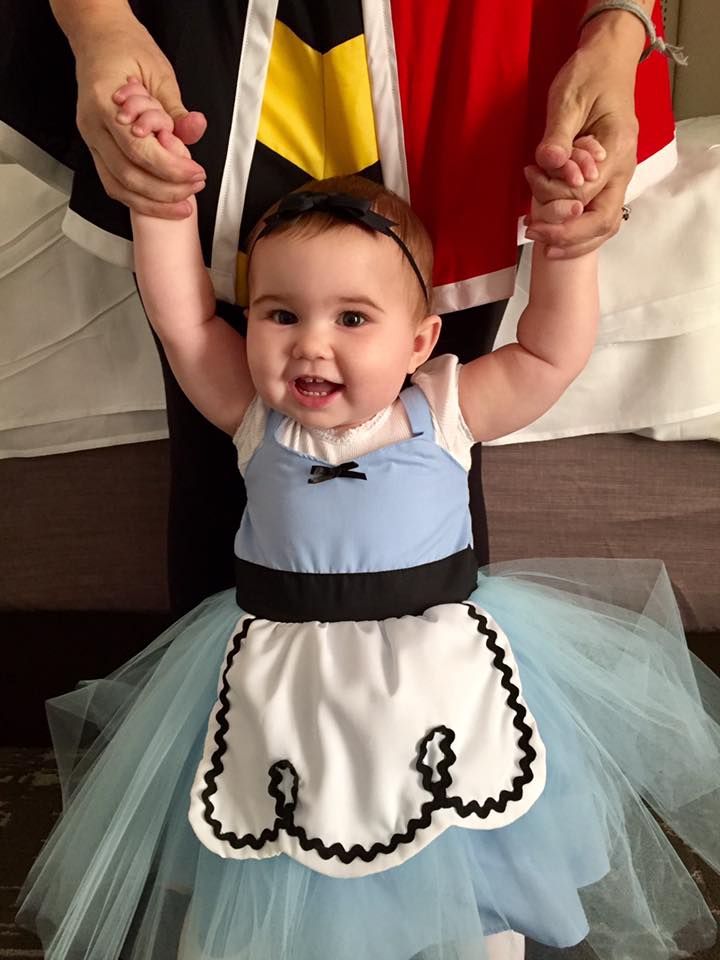 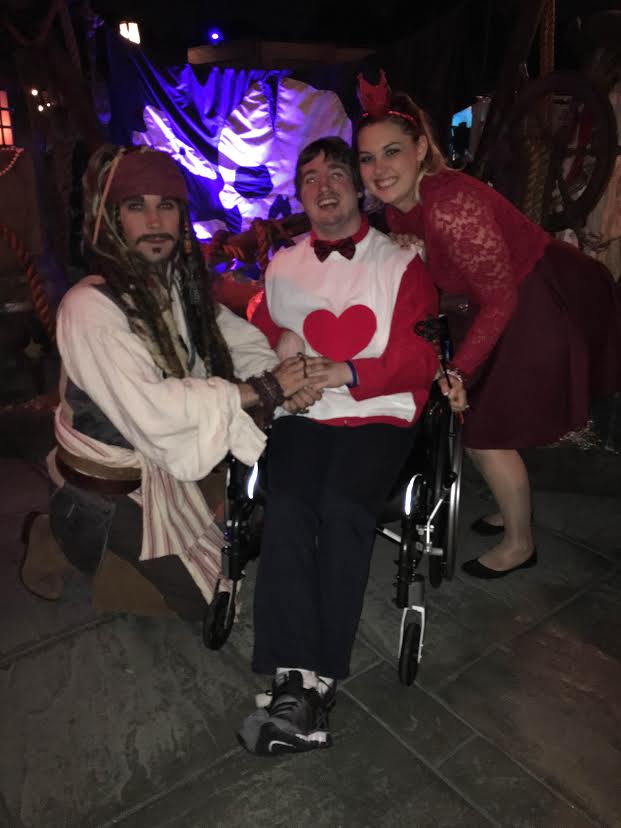 Alice in Wonderland seemed to be a popular costume theme this year. Here’s Kelcie and Larry as Queen of Hearts and Ace of Hearts card with friend Jack Sparrow. 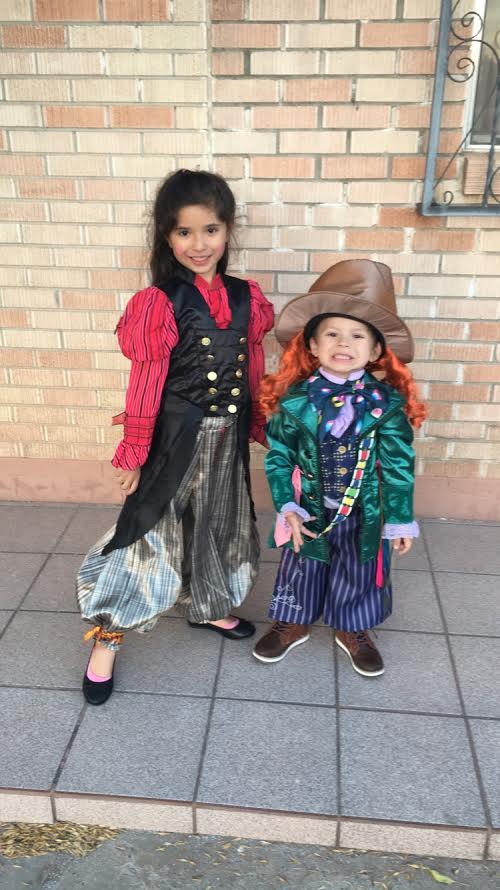 And Ari and Mookie‘s little ones as Alice Through the Looking Glass Alice and Mad Hatter. 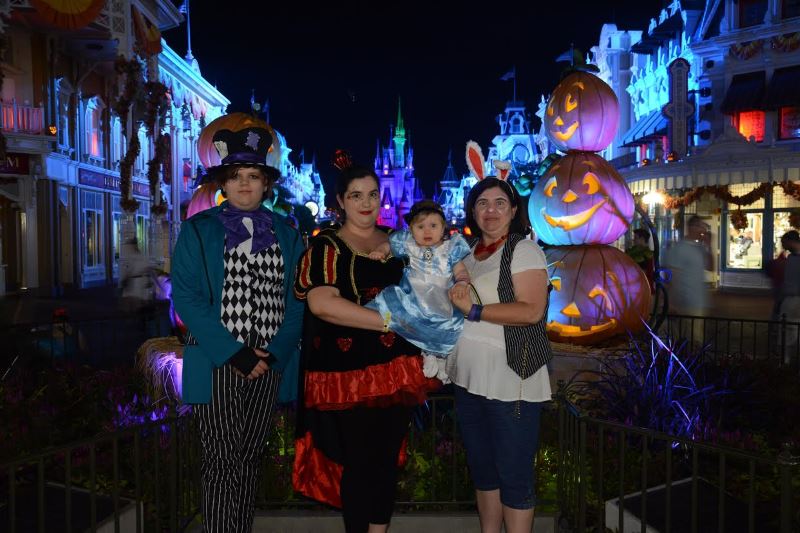 Nicole and her family had a group Alice in Wonderland costume at Mickey’s Not So Scary Halloween Party! Everyone looks great, especially little Alice! 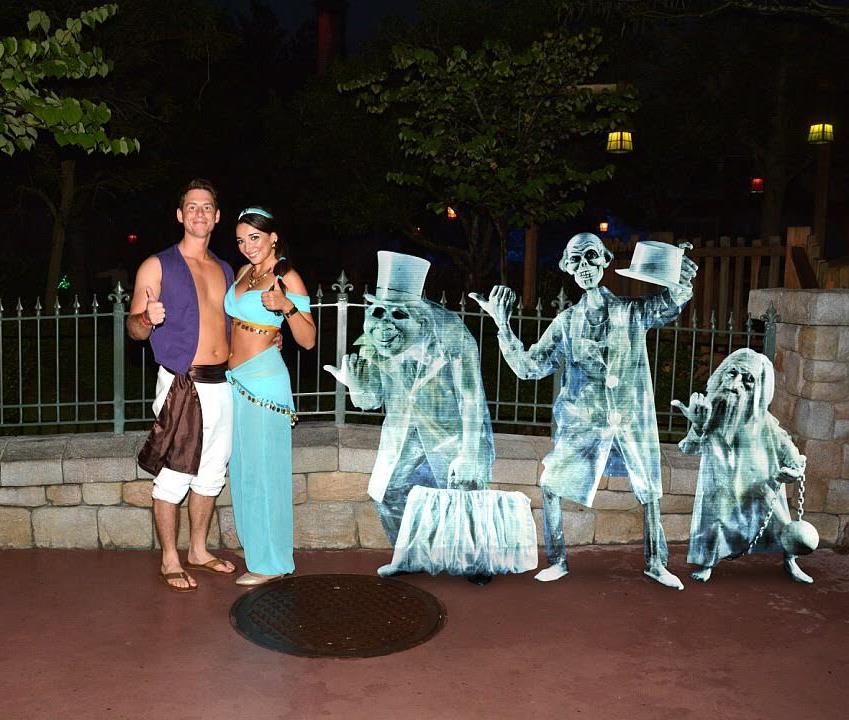 Walt Disney World Bride and Groom Nicole and Michael as Jasmine and Aladdin with some frightful friends!

Thanks to everyone who submitted their photos this year! Happy Halloween!