The official, not-there-in-person, “Diamond Celebration” Disneyland 24 hour event “live” stream (as seen through the eyes of social media). I’ll be updating this page as cool stuff happens starting on the evening of May 21, 2015 allllllll the way through the morning of May 23, 2015 so keep checking back!

And that's a wrap! Leaving #Disneyland60 and coming back to #yeg 🙁 #sotired pic.twitter.com/sAFSIY3NSX

6:00 AM – Cast Members lined up to say goodbye to exiting guests.

2:55 PM – Disneyland started letting people in around 3 AM.

UPDATE: As of 2:55am, access to Disneyland and Disney California Adventure parks for #Disney24 has resumed regular operation. #Disneyland60

11:20 PM – I’m not seeing much happening right now. I think there were way more in-park events and characters last year. To be honest, it has been kind of boring! I’m off to bed; will check in tomorrow morning.

11:11 PM – Per usual, Animation Building is the first area to look like a refugee camp.

10:50 PM – I think it’s officially official. Disneyland is not allowing any entries for the rest of the event.

Cast Members telling guests #Disneyland60 has been ordered closed for the rest of #Disney24 by the Resort President https://t.co/PRngNeyPy0

10:38 PM – I’m seeing a few reports on Twitter that Disney is not letting anyone in Disneyland for the remainder of the event, even re-entries.

Congrats crazy Disney people. You broke @Disneyland! They are not allowing anyone in the park until 9am tomorrow. Sheesh! #Disneyland60

9:50 PM – I’m trying to recover from watching the fireworks on the live feed. #myemotions

Lines in the esplanade to get into Disneyland are still intense. But based on the live feed, people seem to be leaving in droves.

This is the line to #Disneyland60 #thuglife pic.twitter.com/4v61DKVCpc

8:59 PM – Disneyland is still closed for new entries. DCA is almost at capacity.

7:01 PM – Marvel movies being shown throughout the night at the Tomorrowland Theater.

Tomorrowland Theater to host screenings of ‘Guardians of the Galaxy’ at 10pm and 3am; ‘The Avengers’ at 12:15am. #Disneyland60

7:00 PM – Reports saying Disney has stopped letting people get in line to enter the park.

Line to get into #Disney #CaliforniaAdventure #Disneyland is closed. #Disneyland60

6:55 PM – If you’re a lady at Disneyland, just get in line for the bathroom now.

All the women in Disneyland are in line for the restroom. #Disneyland60 #Crowded

6:55 PM – Now reading rumors on Twitter that both parks have reached capacity and no one is being let in, not even re-entries.

6:41 PM – This couple is apparently doing the 24 hour day at both Walt Disney World and Disneyland.

We made it to #Disneyland60! We started at Walt Disney World in Florida at 6 AM this morni… http://t.co/9k1jkrqd3e pic.twitter.com/SjgSO3WD6n

6:28 PM – The crowd already camped out for the fireworks show. 3 hours to go.

6:19 PM – I don’t want to alarm anybody but there’s a giant cupcake on display at Jolly Holiday.

6:17 PM – LOTS of people complaining on Twitter that they went back to the car, went to their hotel, etc, and now can’t get back in.

My son is getting married! He said yes at the wishing well. So sweet. @DisneylandToday #disneyland60 #disney24 #love pic.twitter.com/S2bjBJRfo1

Many guests enjoying #Disney24. Disneyland park is not currently admitting any guests. Updates to follow. #Disneyland60 (2/2)

Disneyland is now at capacity. So allllllll these people are waiting outside to get in. Insane! #Disneyland60 pic.twitter.com/IV7DeIPNRg

5:00 PM – My friend Chrysty posted this picture from Harbor Blvd, waiting in line to get through bag check.

The line to get into Disneyland extends beyond the guest drop-off area and is growing longer & longer by the second. #Disneyland60

4:00 PM – At some point while I was gone for lunch and to get my nails did, the Disneyland gates closed and they stopped letting people in. The scene from the Esplanade. Good gravy.

The queue for #Disneyland and #CaliforniaAdventure. No admission unless you've already been in the park!! #disneyland24 #disneyland60 #disney

12:30 PM – One of the new Emporium windows features a Peter Pan scene.

The #PeterPan window on Main St. is incredible. The scene changes from the bedroom to flying over London. #disneyland60

People are already lining up for the #PaintTheNight parade! #Disney24 #Disneyland60

No lockers left at Disneyland or in esplanade. A few left at DCA though. Got lucky #Disneyland60 #Disney24

Reports are coming in saying Disneyland may close the gates in the next 30 min due to capacity. #Disneyland60 #Disney24 #SR24

11:40 AM – In case you didn’t know, Disneyland has live stream cameras set up at both parks. The sky looks ominous right now. 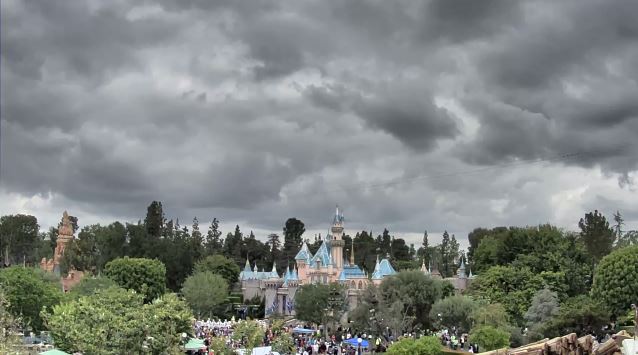 9:43 AM – The Snow White photo op comes with Dopey masks.

Cause the boys in the hood are always hard.. #Disneyland60 pic.twitter.com/BaLI3Rr5MN

Carthay Circle is all blinged out too! 💎💎 #disneyland60

It's only 8:35 am at Disney California Adventure and this is the scene at #Starbucks on Buena Vista Street! #disneyland60

7:52 AM – The official Disney Parks Blog photo of the crowd waiting at rope drop at 6 AM.

7:15 AM – Some kind of special Mickey pastry thingy!

One of favorite things about special events! #disneyland60 #mickeymouse #disney

7:00 AM – The cutest Disneyland 60 poodle skirt you’ve ever seen. Daily Sparkle does it again.

6:20 AM – Snow White themed photo op; not sure where this is located.

6:15 AM – It appears the monorail has a “Tomorrowland” movie overlay.

6:10 AM – Special edition of The Buena Vista Bugle!

6:00 AM – Beautiful shot of the fireworks against the overcast cloud cover.

6:00 AM – Fireworks all along Main Street

5:40 AM – There are reports of crowd surfing. I cannot find pictures.

Moments after I took this photo, someone crowd surfed lol #Disneyland60

5:30 AM – The lines to get into DCA are much more reasonable.

Waiting to get in to #CaliforniaAdventure #shinebrighterDL24 #Disneyland #disneyland60 #DL24ix

Made it in! #Disneyland60

5:00 AM – Diamond Anniversary Goofy is on hand to entertain the masses.

4:15 AM – The first Diamond Days “word of the day” is TOMORROWLAND.

4:10 AM – A packed Main Street. Park doesn’t officially open for another 2 hours.

4:00 AM – The line is moved from the Esplanade into the park.

2:00 AM – Around 2am it appears Disney started passing out these commemorative ears to the people waiting in line. I read there is about 3500 of them. And yes, they are already on Ebay.

11:09 PM – Things seem to be holding steady for now. I’m going to bed and will catch up with the festivities in the morning!

Are they releasing Jordan's outside Disneyland tonight or what? #Disneyland60 #jordan #sneakers #disneyland #disney

.@disneyaddict22 is first in line for #Disneyland24 #Disneyland60 24 hours of Disneyland starts @ 6 am #mydayinLA pic.twitter.com/00fVaRY6iz

What do you do when Disneyland is celebrating 60 years tomorrow morning at 6am? Camp out of course! #Disneyland60 #disneylanddiamondcelebration #disneyland #trending #werenotcrazy @madicupcakes

10:16 PM – Someone on Instagram is reporting there are approximately 1500 people in line already! O_O

The first people to form the line for Disneyland's 24 hour party arrived at 6pm tonight. Have fun! #Disneyland60

While we are waiting, you can watch the new “World of Color – Celebrate” show on YouTube from Inside the Magic.

Also from Inside the Magic, you can watch the newly reopened POV Matterhorn Bobsleds, featuring a new audio-animatronic Harold and NO MORE RAINBOW CRYSTALS. (RIP)