Today marks six months of unemployment self employment. I’ve pretty much given up on finding an office job in my field; there just doesn’t seem to be anything out there that fits my skills. So I think it’s safe to say now that I’m “self employed.” Self employment has been a major adjustment, and also super natural, all at the same time. After six months I’m finding my stride and new opportunities are presenting themselves nearly every day. I’m so grateful. But, there are so many things about self employment I thought would be true that totally aren’t. So to mark this special anniversary, here’s my personal list of 6 myths about self employment. 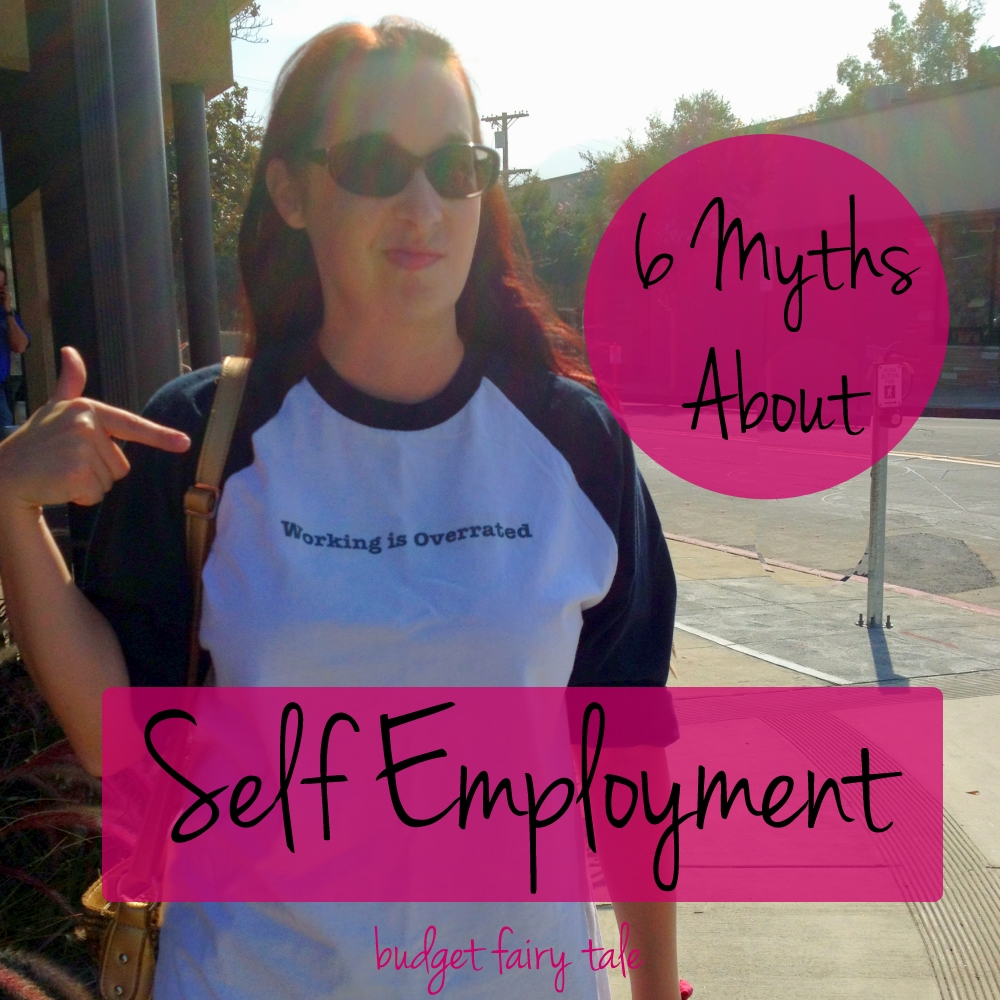 1. I thought I’d spend so much time outside. When I worked my day job, I would spend part of my lunch break outside by the LA River across from our apartment. Just 10 minutes or so. I’d soak up the sun and dream of a day where I could be on my own schedule and I could work from ANYWHERE and I could sit outside in the sun all day. Now I live in a house with a front yard AND a backyard and I pretty much never go outside, unless it’s to take photos. In the morning I’ll sit down at my computer and hours will fly by. I never think “I need a break” because I’m loving the work I’m doing. That’s good, but it’s also bad, because I SHOULD spend more time outside and I SHOULD force myself to stretch and take walks. Before I would take walks to escape, and now I see taking walks as time away from the work I love doing.

2. I thought I’d have more time to watch TV. I’m a reality TV junkie, and Mr. BFT watches a lot of scripted shows for “research.” Before when I was working my day job PLUS my side jobs, I simply did not have time for TV. I love watching TV and being connected with what’s happening in pop culture and understanding all the inside jokes. When my side jobs became my day job, I thought I’d work for 8 hours and then have ALL THIS FREE TIME to watch TV and do other things in general. NOT REALLY. I’m working harder than ever before and I tend to work 10-12 hour days, 7 days a week. I feel like I’m never NOT working. Even when I’m relaxing, I’m thinking about my writing schedule for next week, brainstorming DIY ideas, and thinking about what I can share on Instagram.

3. I thought I’d be so much more productive than I actually am. First I’ll start by saying that working 10-12 hours and being productive for 10-12 hours are totally different things. Before I would do my writing and blog tending in the evenings, and I knew I only had a certain chunk of time and I HAD to get things done. So I did. When I first became self employed, I found I was really great at sleeping in until 9am, putting things off until “later,” and playing around on Facebook and Pinterest under the guise of “networking.” I found I wasn’t really productive until around noon, and then I’d find myself working until midnight or later. I started to get really overwhelmed and had to change some of my behavior. I still sleep in because after 15 years of waking up to an alarm it feels really great to wake up naturally. But once I’m up, it’s GO GO GO. I’m still not the world’s most productive entrepreneur, but I’m learning.

4. I thought I’d work out, like, ALL THE TIME. Before I was laid off, I used to run on weekends and sometimes after work. I thought if I was self employed I’d work out EVERY DAY. Like, I’d spend a full hour every day working on my fitness. And the truth is, I totally could do this, if I planned my day better. But now I know the truth – I AM LAZY. It’s nice to be able to work out first thing in the morning now (I’m so not a morning person, so exercising before work was never an option for me) but I still only do it about five times a week. Better than nothing, I suppose.

5. I thought I’d see my friends more often. I’m a horrible friend. I never call, I never text, I never make plans. When I was working two jobs I would blame my horrible friendness on how busy I am. Now, I’m still busy I guess, but the truth is I’m just really bad about making plans with my friends. I thought being able to make my own schedule would open me up to so many more social opportunities, but shame on me for not making the effort.

6. I thought I’d be financially stable after six months. HAHAHA! HAHAHAHAHAHA! HA! I am adorable! I had read so much advice about quitting your job and having at least six months of living expenses saved up. This gave me the false impression that after six months of working for myself, I would be magically earning what I was at my office job. WOW, that is SO not true. There is a very small amount of money trickling in and it’s growing month over month, but I am nowhere close to bringing in what I used to make. I’m in a very, very lucky position of having a comfortable savings account and a husband who is working steadily and making good money. But making it on your own is not easy, and the money doesn’t just come magically rolling in once you start putting in more effort. It takes A LOT of hustle, time, and patience.

If you’re unemployed or self employed, I’d love to hear your stories. How did you get by at the beginning? When did things start turning around for you? What was your “big break?”